I think I’ve found my new favourite place to eat. No, scrap that. I’ve DEFINITELY found my new favourite place to eat. Following a steady build of praise and acclaim over many blogs, newspapers and websites, Pitt Cue Co started to ingrain itself into my subconscious. I heard rumours of BBQ meat that melts in your mouth and queues that wind around the block from the moment the doors open. But my beautiful friend Ms G and I braved the cold and made to quiet Newburgh St at the back of Carnaby St to Pitt Cue Co’s tiny little corner premises where miraculously (we were told by the waitress) there wasn’t a queue! We were sat upstairs on leather bar stools, which I personally think was nicer than the tables downstairs (which doesn’t have any windows and is quite squished), and listened to blues rock music which fitted in perfectly with the BBQ and whiskey theme. 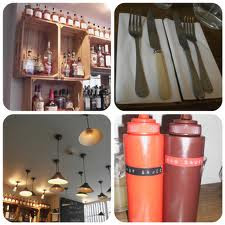 But let’s not beat around the bush. We were here for the food. The menu was simple and short which included the staples of pulled pork and beef brisket. We couldn’t decide which ones to go for so I went for the pork and Ms G went for the beef and we swapped half and half so neither of us missed out! And here it is: 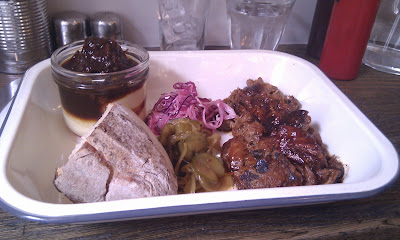 So what is in my charming little tin tray up there? On the right is the melt in the mouth beef brisket and simply amazing pulled pork. In the middle, pickled gherkins, onions and red cabbage – which wouldn’t normally be my thing but I completely polished it all off! On the right, fresh toasted sourdough bread, and in the jar is cheesy mash topped with the burnt end of beef brisket. Is your mouth watering yet? If I hadn’t of gone for lunch, I would definitely stayed for dessert, but as it was I was totally and utterly full.

Don’t underestimate this place. You may have to queue but my god it’s worth it! The kitchen’s open until 10pm so there’s really no excuse.