I’m happy to admit that I have a soft spot for chick flicks. Of course there are some God awful ones out there (The Holiday is literally the worst experience I’ve ever had in my life and I’m sure must give childbirth a run for its money), but even a straight male can’t deny that there are some that are hilarious, well scripted and worthy of your DVD collection. Amongst Dirty Dancing, Clueless, Romy & Michele and Bridget Jones the other film in my Top 5 is Legally Blonde. And it’s had an inevitable transformation onto the stage, but as a musical. I was sceptical at first but when my cousin got a great Groupon deal for us to go and see it at The Savoy Theatre I couldn’t resist. The musical has been so naturally adapted that it you could easily be forgiven for thinking it had been produced on stage first. What’s important to know about the film is that it is very very funny and is fully aware of the stereotypes it puts on blondes, sororities and American culture. If you are associated with any of those things and you can take a joke then you’ll get it. It’s the same type of satire that ‘Shit Girls Say’ has made a cult from on YouTube, after all, stereotypes have to come from somewhere to begin with, right?

This version of Legally Blonde is the most faithful to its original predecessor of any adaptation that I’ve ever seen, and although it is a musical, it doesn’t drift from the plot and even (to my absolute delight) uses some of the best quotes from the film (“She does exercise, exercise releases endorphins, endorphins make you happy, and happy people just don’t kill their husbands!”). There is even a real chihuahua playing Bruiser who elicited exclamations of delight from the audience every time he came on stage. 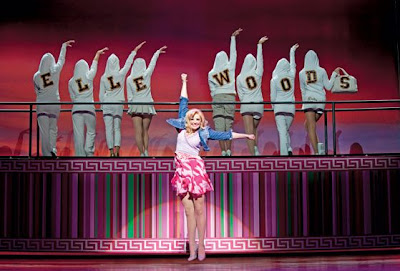 The cast were fantastic, from the suitably sleazy Warren (whose self-obsessed character is brilliant musical fodder) to the Delta Nu girls who were a preppy version of Whoopi Goldberg in Sister Act and absolutely hilarious. I was a little disappointed by Natalie Casey as Paulette – although her actual performance and singing voice were superb, her accent was the dodgiest thing since Dick van Dyke’s Cockney in Mary Poppins. Was it Texan, New York, Yorkshire, or a weird hybrid of all three?! The stand out performances for me were Tamara Wall who was perfect as workout queen on trial Brooke Windham and of course, the leading lady Carley Stenson as Elle Woods. I hope the professional critics were as wowed with her as I was, as after being in Hollyoaks there are bound to be some people who doubt her abilities. But this is a musical, and they wouldn’t be on that stage if they couldn’t belt out a tune. 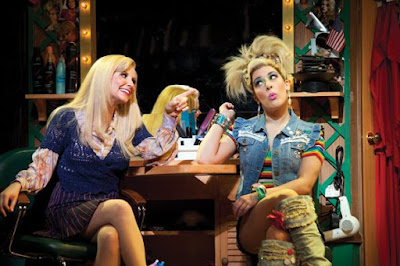 And oh my word, the tunes! The songs are absolutely inspired and are just as funny as the script. They blend seamlessly into the performance and add so much character to the actual scenes. My personal favourite? Gay or European – catchy and ridiculously fun.

So, don’t be put off by the overtly female pretence of this; look beyond the pink and the references to shopping and just enjoy a brilliantly scripted, jaw achingly funny and thoroughly enjoyable piece of musical theatre. Let me know what you think!