One of my favourite books of all time is ‘The Hitchhiker’s Guide to the Galaxy’ by Douglas Adams. A book that’s loved worldwide wasn’t Adams’ only accomplishment, a lot of people don’t know that there were another 4 books in the series, that he was a passionate representative for a number of charities and that he was involved in both Dr Who and Monty Python’s Flying Circus, and numerous other achievements. He sadly died in 2001 at the tragically young age of 49 and he would have turned 60 this year.


In memory of Douglas and to raise money for his favourite charity, Save the Rhino, the Douglas Adams Virtual 60th Birthday event was held at Hammersmith Apollo where fans clad in towels gathered to celebrate and remember the author. 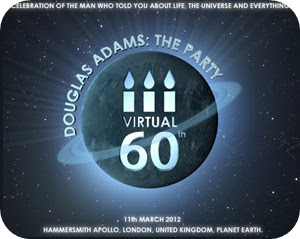 The event was presented by Clive Anderson and he was joined throughout the evening by other famous comedians, scientists and musicians to perform sketches, songs and talk about the life, the universe and everything.


There were informative but hilarious presentations by scientists Simon Singh and Helen Keen as well as a section by comedian and presenter of Radio 4’s Infinite Monkey Cage Robin Ince.


The producer of such programmes as QI and Blackadder, John Lloyd, read his favourite sections from the Meaning of Liff – a book he co-wrote with Douglas Adams. It is basically a dictionary of words that don’t exist, such as:
‘WOKING (participial vb.) Standing in the kitchen wondering what you came in here for.’

Comedians and actors Rory McGrath, Angus Deayton, Michael Fenton Stevens, Philip Pope, Helen Atkinson Wood, Sue Sheridan performed sketches written by Douglas from when he was in Footlights and once he was actually famous too. It was stripped down, no fancy stuff, no complicated props or settings – just basic and really really funny. It’s so good to hear a venue full of people all laughing so geniunely and still loving material that was written decades ago (and in my case, before I was born!).


The main reason I bought a ticket though was because of the ‘in conversation’ section which was a live conversation with Python Terry Jones. He was billed as being joined by Michael Palin who sadly wasn’t there, but he was sat with Sanjeev Bhaskar which was great anyway.


Sadly there were other big name dropouts too in Professor Brian Cox and Stephen Mangan and I’ll be honest, the line-up lost some of its excitement for me because of their no-shows.


To finish off the evening, musician friends of Douglas performed (I have to admit I didn’t know who most of them were), but they were joined by some musical heavyweights too in the form of Pink Floyd guitarist David Gilmour and Procol Harum singer Gary Brooker, finishing with a rendition of Whiter Shade of Pale.

Overall verdict: An all round family friendly entertainment package which was good fun and raised money for a great cause while celebrating the life of an all-time great.