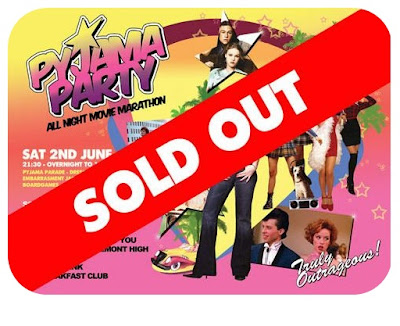 When I read about this on my favourite blog, Domestic Sluttery, I actually let out a scream. One night, 8 classic girly films, and the chance to wear pyjamas in public.

The Prince Charles Cinema hidden just behind Leicester Square in central London hosted the first of their Pyjama Parties and it was enthusiastically attended by a sold out audience of over-excited adults in onesies. Here we are still looking chirpy at the beginning of the night: 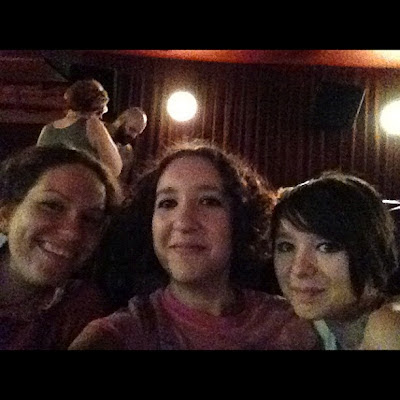 We had our masses of snacks (including a LOT of cheese) and sleeping bags and were stupidly excited to spend the night in the cinema. We settled down in our seats at 9.30pm and got ready to watch the first of 8 films: 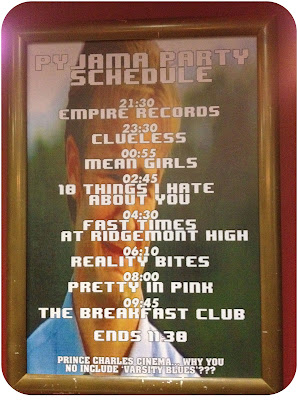 I can say quite happily that quoting along with 100 other people to Clueless is definitely one of the highlights of my year so far! It’s always nice to know that other people have spent as much time as me in front of American teen comedies. These films are all absolute modern classics too; complete cheese but genuinely hilarious and superbly written – a very clever selection by the cinema team!

I’d love to say we stayed until the very end, but by the end of the 5th film it was 6.30am and we decided to jack it in. We certainly weren’t the first, I was amazed how many people had left in the middle of the night! But we definitely left at the right time; we were still happy and not absolutely miserable from lack of sleep. Kudos to all the people who stayed on until 11.30am and battled the Jubilee crowds to get home again!

Definitely check out the Prince Charles Cinema’s events page, they have a really eclectic and varied schedule. I’m going to sign up for their annual membership which is only £10 – an absolute bargain!

1st photo from www.princecharlescinema.com. All other photos property of Shopped and Dropped, do not re-use without permission.