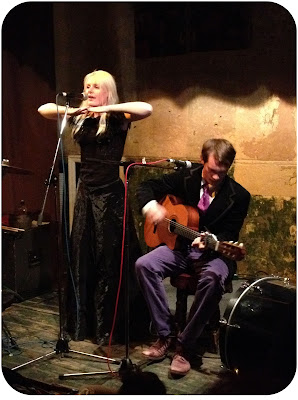 I’ve written about Bitter Ruin before, and they really are one of the most exciting bands breaking the mold at the moment. Their blend of delicate goth ballads are moving, shocking and intense – and when you consider it’s just two people and a guitar, you can’t fail to be impressed.

This gig was something special though. The venue, Jamboree near Limehouse, East London, is in part of a converted sweet factory and is the perfect quirky place for Bitter Ruin to hit the stage. Accordions and keyboards adorned the walls, absinthe cocktails were on offer, and the faux theatre trimmings around the stage gave an essence of dilapidated Victoriana that made the fans decked in impressive steam punk outfits fit right in. 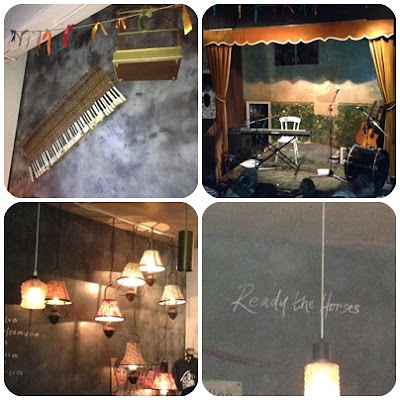 The support artist was Joe Black – the bastard child of Chas & Dave and Marilyn Manson; a mixture of honky-tonk, punk and cabaret that was entertaining and confusing all at once. There was a lot of shouting and audience participation which is always good to keep the crowd in a good mood. 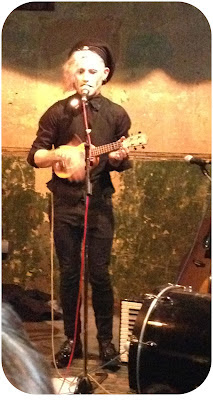 However, this was completely different to the respectful silence and awe the audience exuded when Bitter Ruin came on. People were mesmerised, and it was like watching a silent movie with the dramatic score being played in the background. The band are well aware of their dedicated fanbase, and went out of their way to make this a memorable gig. At one point they pulled up two volunteers to have a singing battle from their single ‘Trust‘ – and big kudos to the people who did it, I wouldn’t have been so brave!

The ultimate highlight though, was at the end, when the whole crowd was invited outside into the courtyard for a stripped down acoustic performance of ‘A Brand New Me‘ and (after coaxing from the crowd) ‘Outrageous’ (I took a video of this one below). It was, as Georgia the frontwoman pointed out, like a real life musical – the crowd all sang along quietly and respectfully, and erupted into cheers at the end.

It was a very special moment and I can’t wait to say I was there when this twosome hit the big time. And it’s only a matter of time until they do.

All photos and video property of Shopped and Dropped, do not re-use without permission.