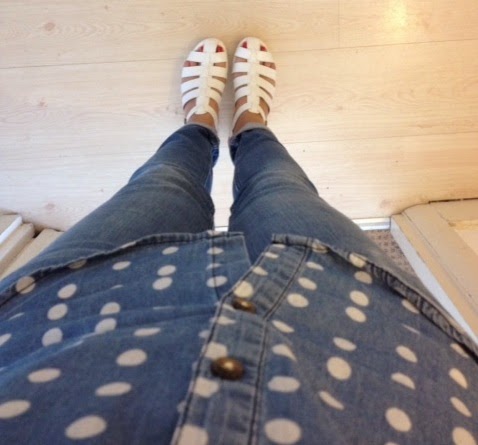 Did you know that double denim is also known as ‘the Canadian tuxedo’? Or so a friend from that part of the world told me anyway. It’s lacking a bow tie, but aside from that it’s still pretty special. I’ve always thought it takes a certain amount of lady balls to pull off such a matching combo, and especially if you manage not to look like you’re going to a hoedown. I’m not sure quite what came over me when I put this outfit on but as my day consisted of a blissful amount of alone time at the hairdressers and the Tatty Devine sample sale (where my sunglasses came from!), I figured that at least if I looked stupid, no one I knew would see me.

But actually I don’t think I looked all that stupid. Obviously polka dots helped the matter too. I don’t tend to wear shirts that often because I have just a little too much boob to pass of the androgynous look with style, but with jeans it’s less about undisclosed gender styling and more about the fact you’re wearing a lot of the same material. It’s pretty much colour blocking really, isn’t it?

And yes, I’ve fallen prey to the clumpy sandal trend, although in my defence, I did buy these in February in Melbourne just because I thought they were pretty. Let me tell you that trying to squeeze a huge pair of shoes into a tiny hand luggage bag back to Sydney is not an easy feat, but was of course completely worth it. This was the first time I’d worn them and they are so unbelievably comfortable that even three hours in the Tatty Devine queue wasn’t a strain. Plus they look awesome.

What do you think of double denim?