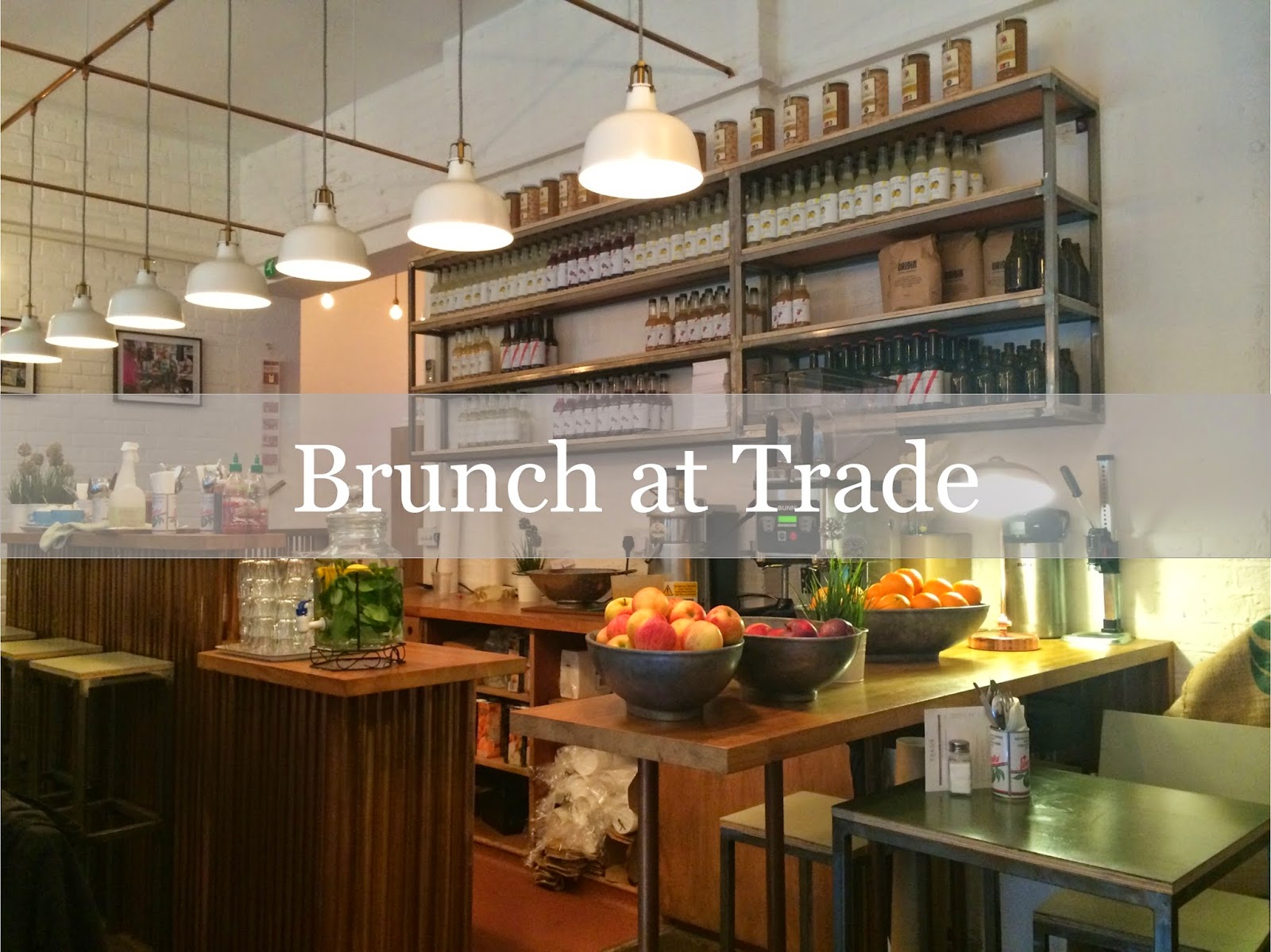 I once had an argument with a friend about what time counts as brunch. On a weekend I could eat breakfast at 1pm if I’m feeling particularly lazy and can’t quite bring myself to go to the shop and buy something. Similarly, I can demolish lunch by 12pm if I’m having a sugar crash at work. I don’t think brunch is defined by time, rather it is decided by what you have to eat. Essentially, if you’re having a kind of breakfast food around lunchtime and you’re in a social setting, you’ve got yourself a bonafide brunch. It’s also a word now synonymous with being pissed by midday, but a trip to Trade was more suited to a pot of tea.

I’ve walked past Trade a few times and have stopped in to grab a bacon roll after going to the gym (I’m of the ‘I did exercise so I can eat this cake’ school of thought’). Peeking beyond the till area, I could see the secret garden advertised on the board outside, and was genuinely excited about an outdoor space away from the main road, set in such a busy part of east London.

A few weeks later, I suggested it as a place to meet a friend late one Saturday morning, and by 11.30am, the place was already packed. Long benches and wooden tables are taken up with your standard Shoreditch types, but delighted tourists and young families too. The place isn’t big and maybe sits around 40 people at a push, so you may have to perch on the end of an already-taken table, but the buzz and atmosphere means you’re neighbours won’t be listening to every word you say. 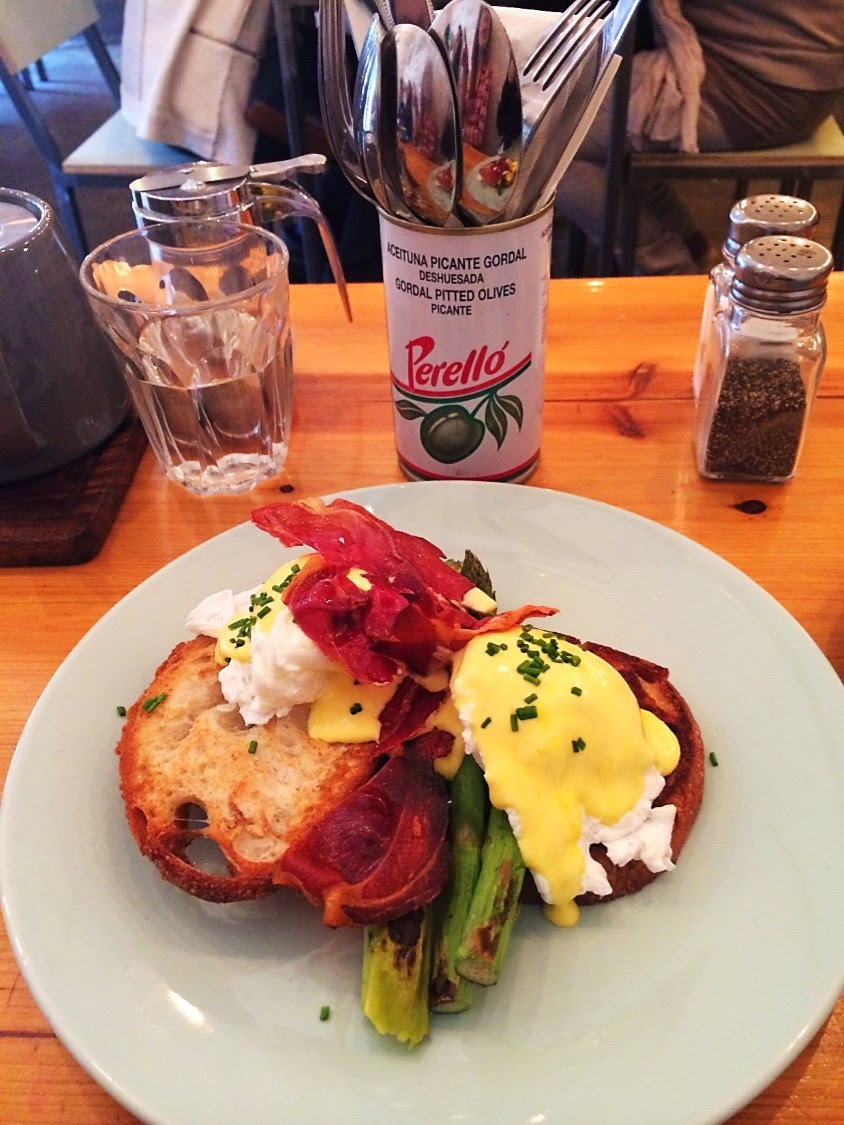 I had poached eggs, pancetta and asparagus on sourdough toast, with the obligatory pot of tea. The toast was crisp, the eggs were runny – it’s a simple dish, but it was so nice to have something offered up with eggs other than avocado (which I hate, to the horror of quite a vast majority of people). This isn’t a place to come for a greasy fry-up, we’re not looking at mounds of baked beans and a fried egg cooked in the same pan as the bacon. It’s a lighter, yet not necessarily healthier, choice. 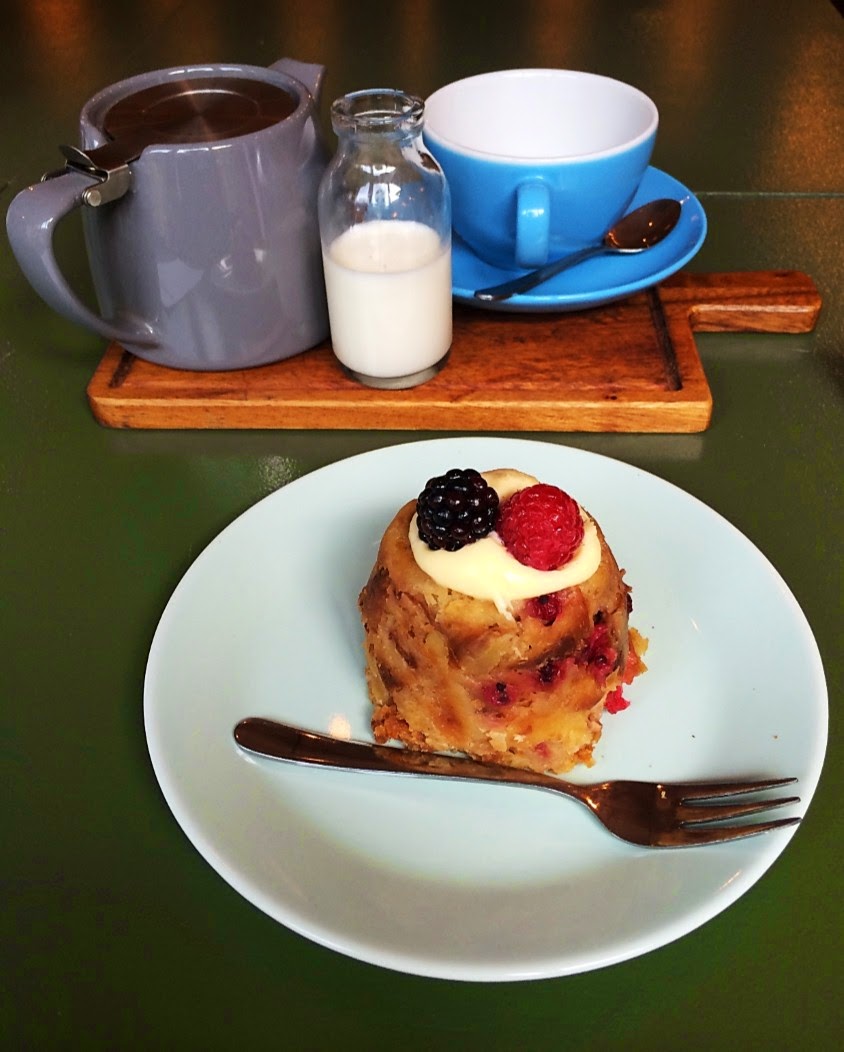 Speaking of not being healthy, I couldn’t resist ordering the last bread-and-butter-pudding-croissant. As an amateur baker and professional cake eater, I was fascinated as to what this would be like. Slicing into it, you could see the flaky layers of a croissant, but when tasting it it was much more like a bread and butter pudding – surprisingly thick and really delicious. Luckily for me, there weren’t any raisins as you would find in the traditional dish, but there were a couple of berries on the top to make me feel slightly less guilty.

Only a stones throw from Spitalfields Market and Brick Lane, Trade on Commercial Street is a secret well worth sharing. Escape the crowds and disappointing sandwiches and head down to see what new cake hybrids they have in store!