I’ve noted before about how lucky I am to work in Central London. The downsides of the crowds and noise are outweighed by the amazing cafes and takeaways, and an overwhelming amount of restaurants. I have a list on my phone of all the places I want to visit, but considering I add more to the list than I tick off (and that’s not through lack of trying!), I doubt I’ll ever manage to eat at them all. Eating out for me is always a luxury. Whether it’s a quick ramen at Wagamama or an eight-course tasting menu at Dinner by Heston, for me I just love the experience.

Barnyard on Charlotte Street isn’t fancy, it’s not one that people shout about from the rooftops, but it is perfectly understated. It’s chilled out interior of oil barrel seats, heavy wood tables and enamel crockery play up to an impression of being basic. This fits well with the menu that’s full of eat-with-your-hands dishes and American BBQ style influences. 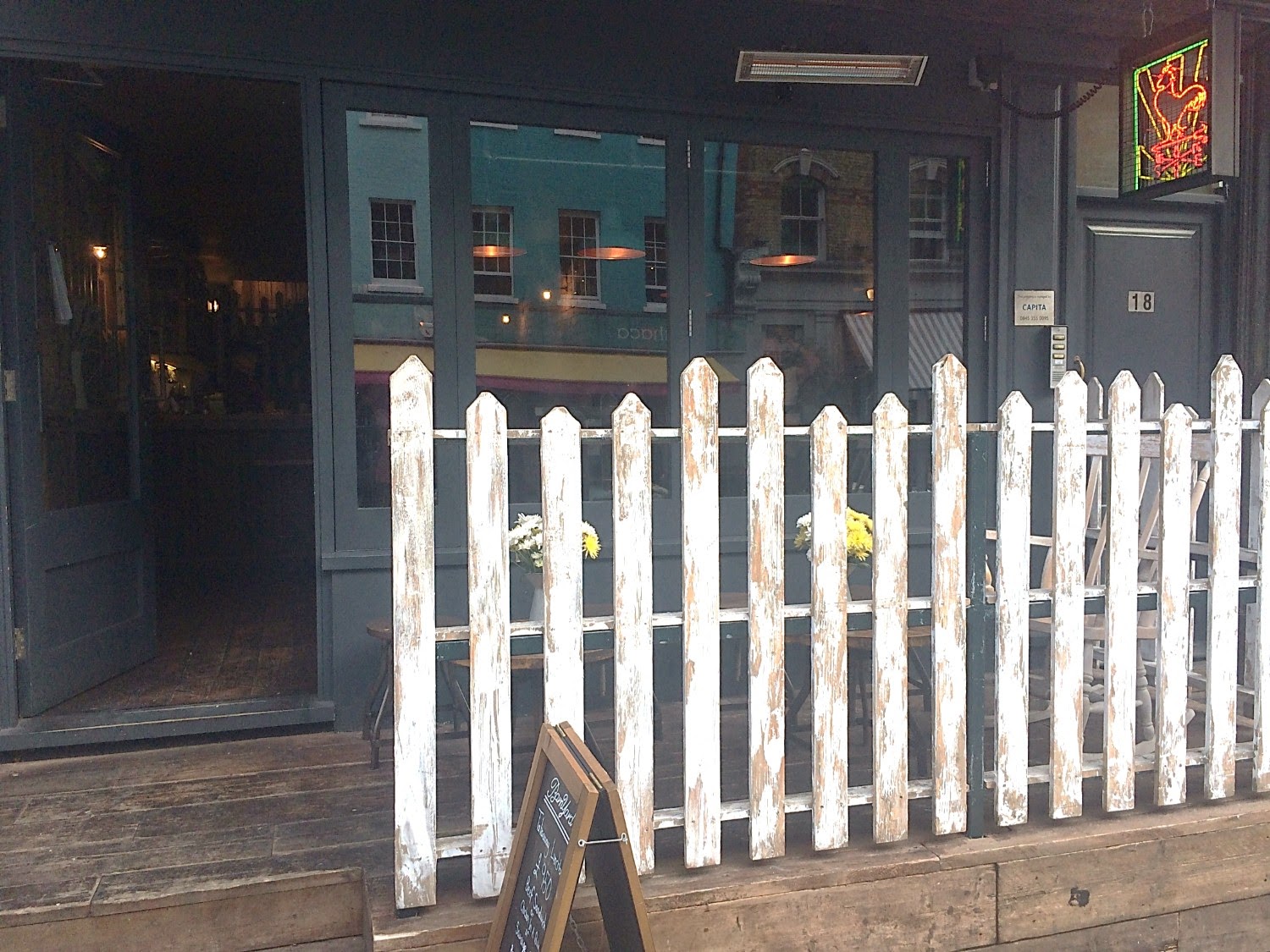 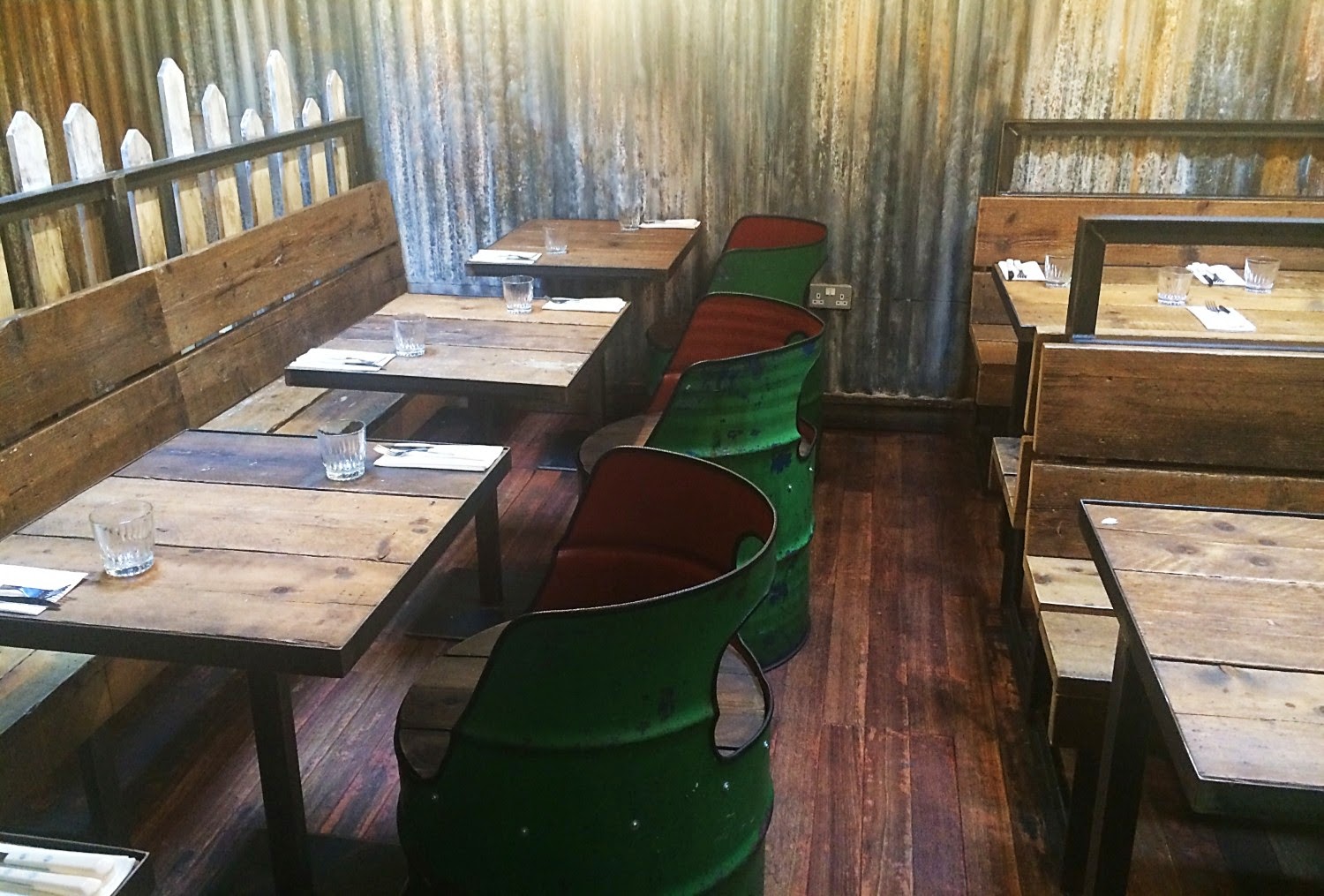 The menu, according to friends that have been there before, changes regularly, so what you see here may not always be available, but the sides seem to remain a reliable staple. We shared some fresh cornbread to start, served in a brown paper bag as though we’d just picked up a takeaway order. It was fluffy but dense – just how I like my cornbread. It was decided to just share a load of plates as we were all afraid of food envy if we made the wrong individual decisions!

The chicken wings were marinaded in smoke paprika and garlic – two flavours I use a lot at home, meaning I was very happy from the off. There was certainly a kick to them but the Mica beer we had with it made it a little less spicy! The piccalilli served with the sausage roll actually outshone the main dish with its tangy chunks of curried cauliflower. I would’ve liked slightly thicker pastry on the sausage roll itself, but it was certainly way beyond your standard Greggs! I like ordering the seemingly boring options like this when eating out as it’s always interesting to see a twist on an old classic. 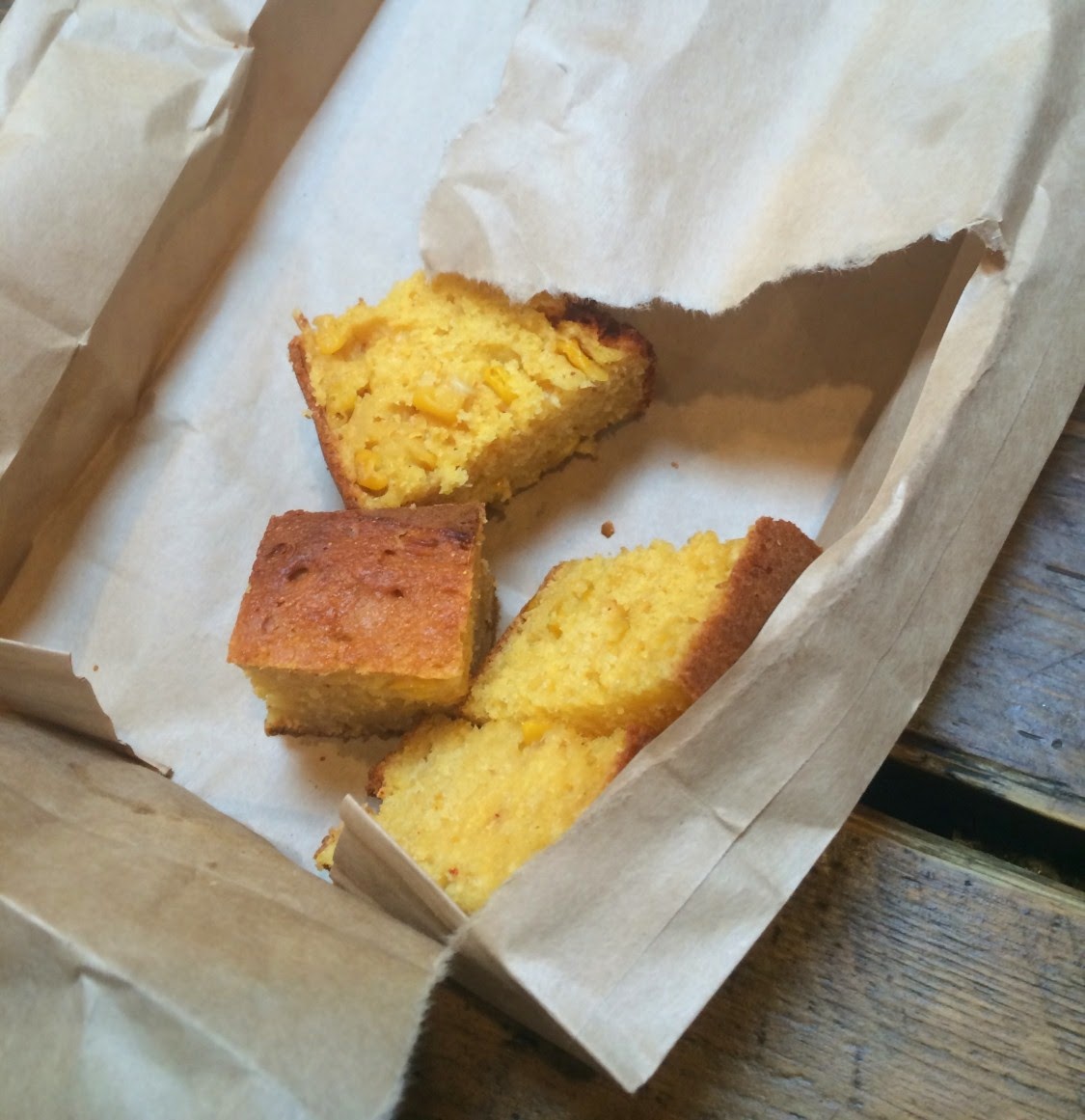 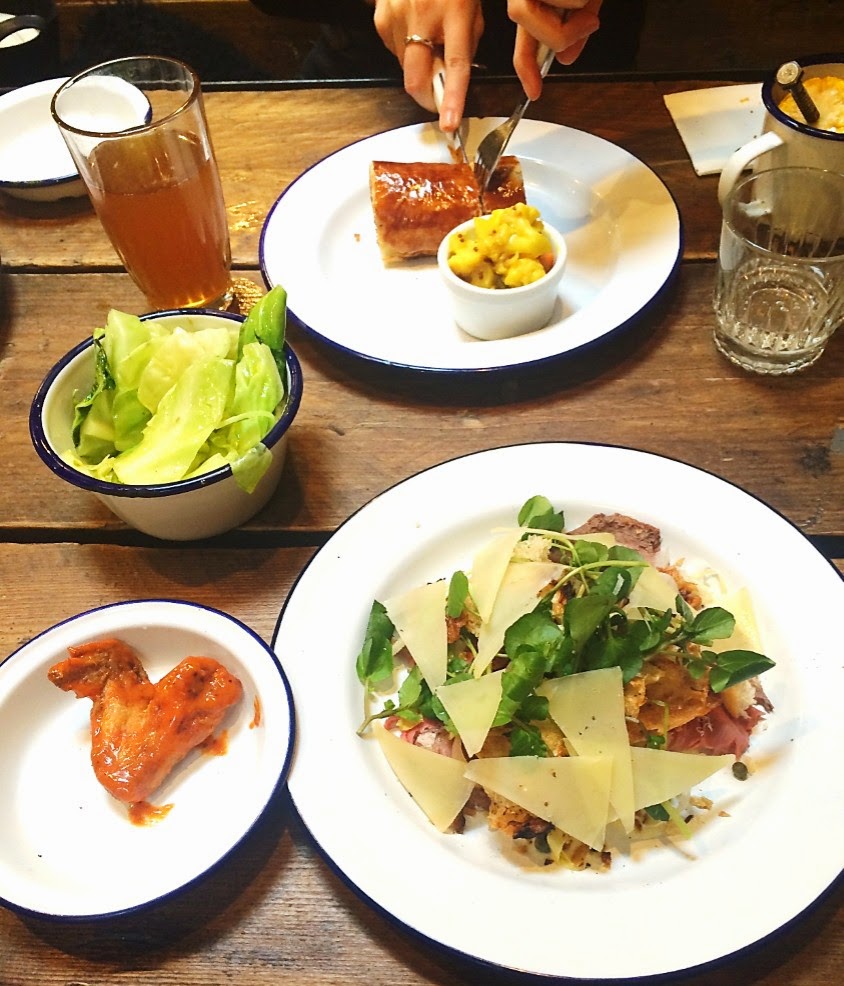 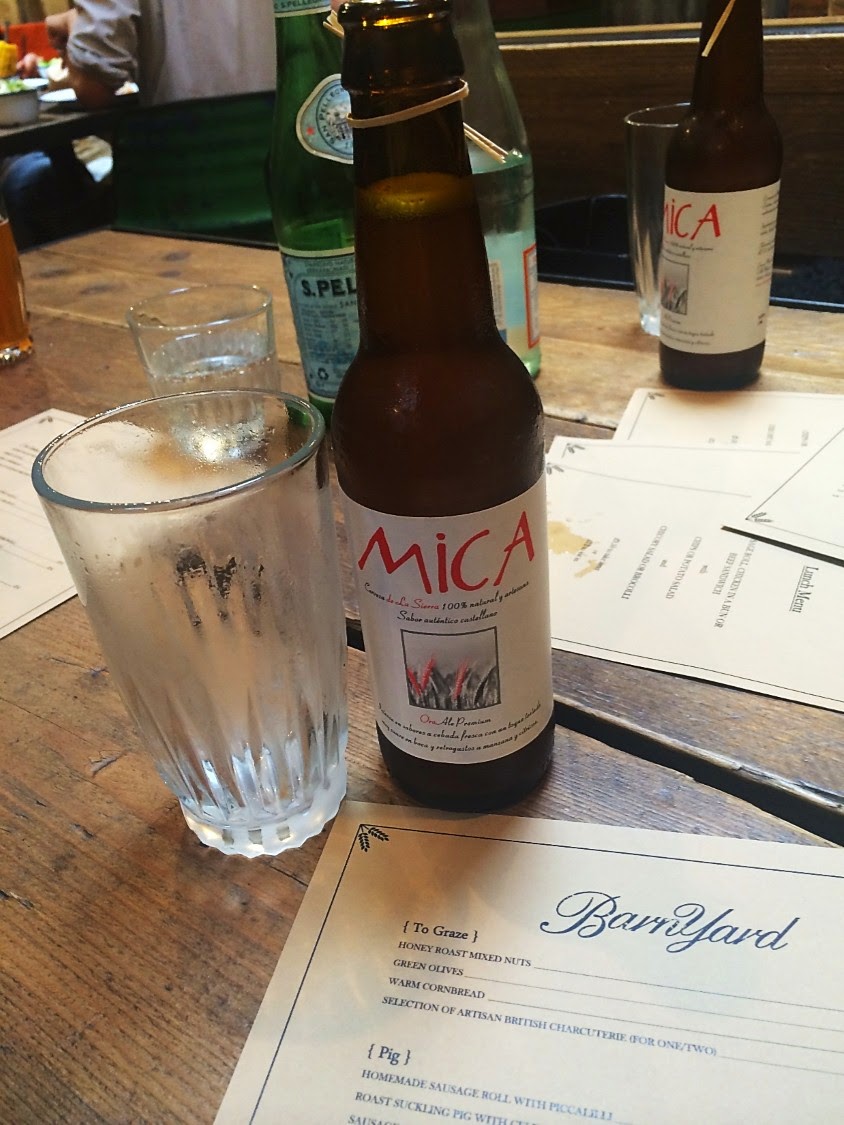 When ordering roast beef you tend to expect a big hunk of meat, but this was delicately sliced, perfectly pink and topped with a watercress salad, sweet pickles and Berkswell (a hard English cheese similar in taste to pecorino). It was a nice mix of flavours but its pretty presentation was quite a contrast to all the other dishes we had.

The best part of the meal for me was the great choice of sides. A creamy potato salad that was demolished so quickly it had no chance of being properly photographed, sheets of crispy cabbage swimming in butter, and charred corn on the cob (again, taking in alllllllll the butter). 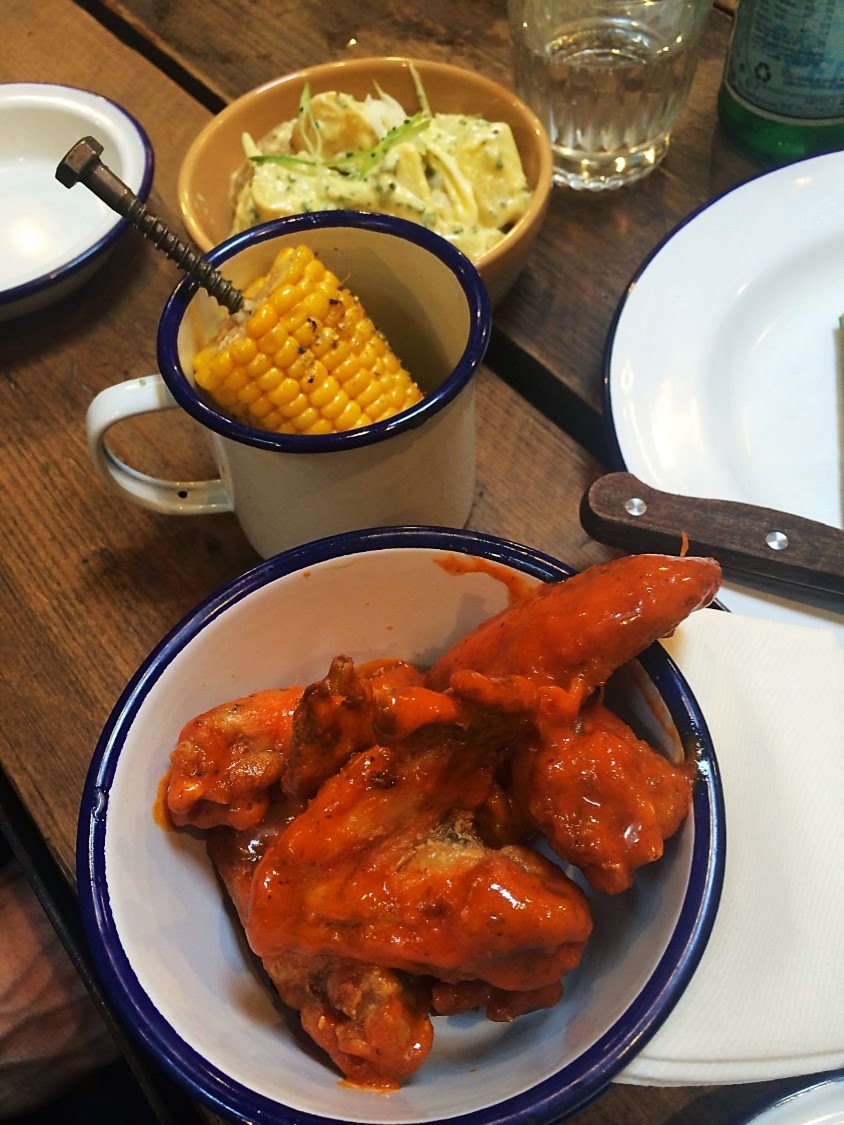 We just about managed to squeeze in dessert which for me was cloudberry crumble. The cloudberry is similar to a raspberry or blackcurrant but not quite as tart. It was interesting to taste it but it didn’t stand out as a whole new flavour to me. The others on the table went for the more exciting popcorn ice cream with smoked fudge sauce. Obviously we’re talking about sweet popcorn here and the flavour certainly came across, but the overwhelming taste was in the smoked fudge sauce (yes, I tasted someone else’s dessert!). I like my sweet things sweet, but this was a strange blend that almost lent a kind of savoury flavour to the sauce. 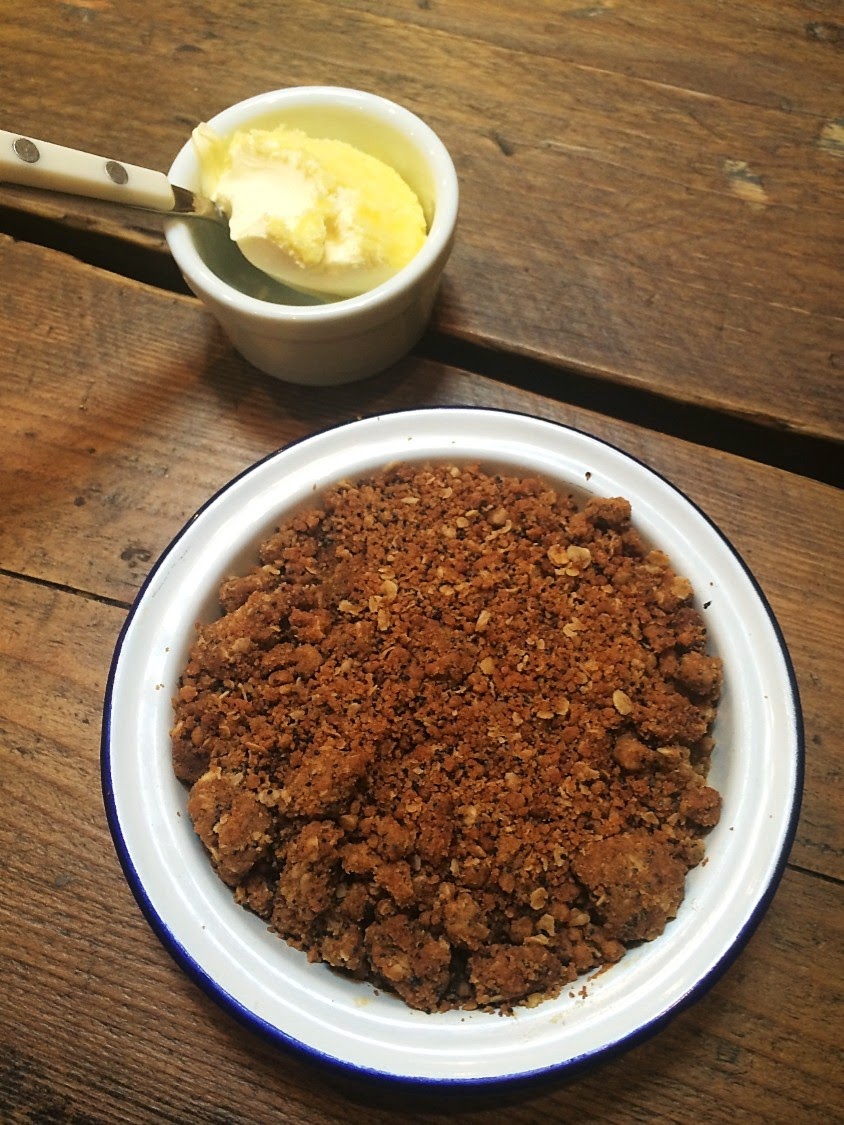 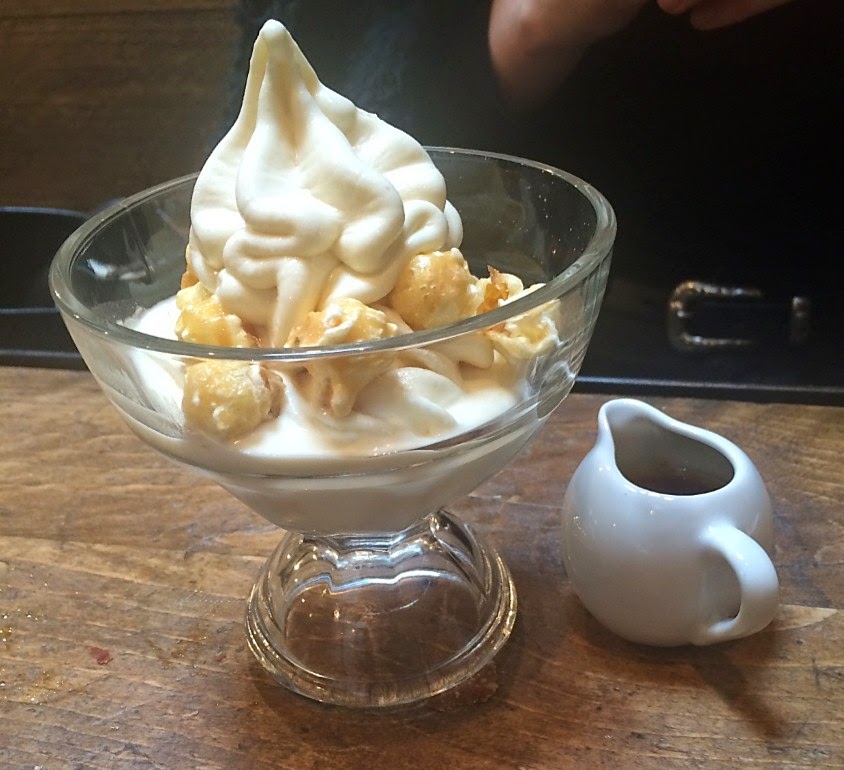 It’s the odd dish that reminds you that Ollie Dabbous is the brains behind this place – a perfectly presented plate or a new flavour and you get the feel of somewhere much more luxurious. Barnyard’s strengths ultimately lie in its savoury offering, and a sprawling lunch between friends suit it, and me, down to the ground.