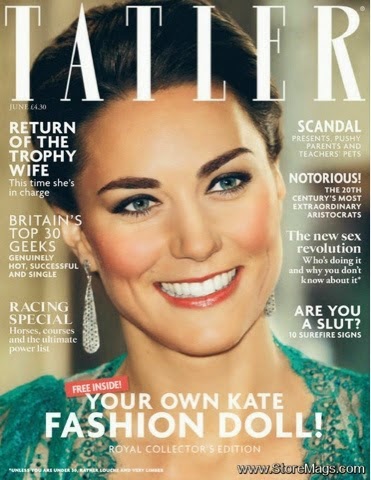 After a nice Monday evening of casual household rivalry watching University Challenge, my boyfriend insisted on watching ‘Posh People: Inside Tatler’ on BBC2. Having read the magazine a number of times in hairdressers and train stations (not their target distribution hubs, I’m sure), I am fully aware of the honking great line that they happily carve between ‘them’ and ‘us’. A stand-out piece for me, I remember reading an article outlining various things that you are allowed to complain about. In case you’re worried, rest assured that you ARE allowed to complain about warm champagne, however you are NOT allowed to complain about sciatica pain.

I feel that gives a pretty good overview of their priorities.

Anyway, I can deal with photos of over-privileged rich kids getting their arses out and snapshots of professional party-goers wearing risque fancy dress to the opening of a gold-plated envelope. I’m not offended by their interests in blood sports and choice of ridiculously priced chinos; we all have our hobbies, and they’re all tailored to upbringing and environment. What I AM offended by though, is Tatler’s blatant gender stereotyping and in particular, their use of the word ‘slut’.

On the front of July’s edition of Tatler (the one with your own cut-out-and-keep Kate Middleton doll *squeeeeeeeeeeeee!*), the focus of Monday’s episode of Posh People, there sat the headline, ‘Are you a slut? 10 surefire signs.’
HOLD UP.
What?
A supposedly respectable British institution, Tatler was shamelessly using a word that is now synonymous with branding sexually active women as immoral, wrong and unequal. ON IT’S FRONT COVER. The wonderful new online magazine AFT wrote a brilliant piece asking ‘When is it OK to call a woman a slut?’. This line from the article sums up the word’s usage perfectly: “It’s just using sexually promiscuous as a lazy short hand for a girl who you don’t like, and it’s time to start being more accurate and realistic with your descriptions.”

I couldn’t find the Tatler article online (although I found plenty of angry tweets from when it was first published), but searching for the word ‘slut’ on the Tatler site showed some brilliantly insightful results. Here’s a couple of snippets:

“Long ago, at a university May Ball, I bumped into an old friend who was wearing a tiara. Because of this – the tiara – all my new friends thought she was a bitch. Go figure.

Actually, if you’re a woman, this possibly doesn’t perplex you at all. ‘The 1990s?’ you’re probably thinking. ‘A student? In a tiara? Slut!’ Or something like that.”

“Because what if you’re the kind of slut that cleans your ears with a cotton bud and leaves it lying on your dressing table, before using the VERY SAME cotton bud to artfully smudge your eye make-up?”

– The Made in Chelsea slut (in fact, when searching for ‘slut’ on Tatler’s site, the majority of the articles actually refer to Made in Chelsea, and one character in particular)

“Settling their differences over that slut Lucy. Whoopsie I didn’t mean that. For legal reasons, she’s probably not one. And anyway Spencer said it first.”

“More Lucy drama, and she gets all upset at being called a ‘slut.’ Burn the witch, I say.”

Can you imagine the uproar if The Sun had this word emblazoned across their front page? What if Cosmo separated this year’s must-have Christmas party dresses into ‘slutty’ and ‘not-slutty’? To casually throw this word out into the public domain is just as ill-thought out and offensive as calling somebody a chav or a gypsy – it implies that you know the intimate details of somebody’s life and then ignorantly assumes that you actually have the right to comment on it. It tells the world that it’s OK to judge women who are sexually promiscuous, or in Tatler’s case, that it’s OK to judge any woman about anything that is remotely against ‘proper’ etiquette.