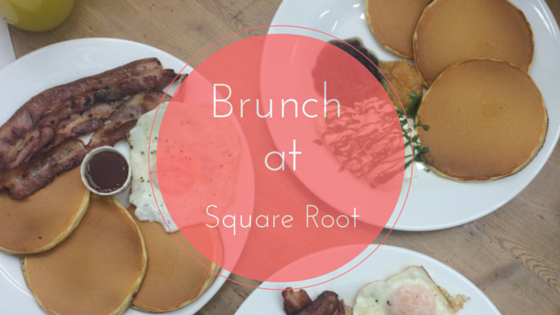 A couple of weeks ago, the wonderful Jasmin Charlotte invited me to a meet-up she was holding in Covent Garden. I got to meet lots of lovely bloggers including Etta and Lucy, and we instantly clicked over our mutual love of food. When I spotted an obscure Hackney pop-up I automatically knew that these two would definitely come with me, and so through the power of Twitter, we arranged to meet one Saturday morning for brunch and a catch-up. 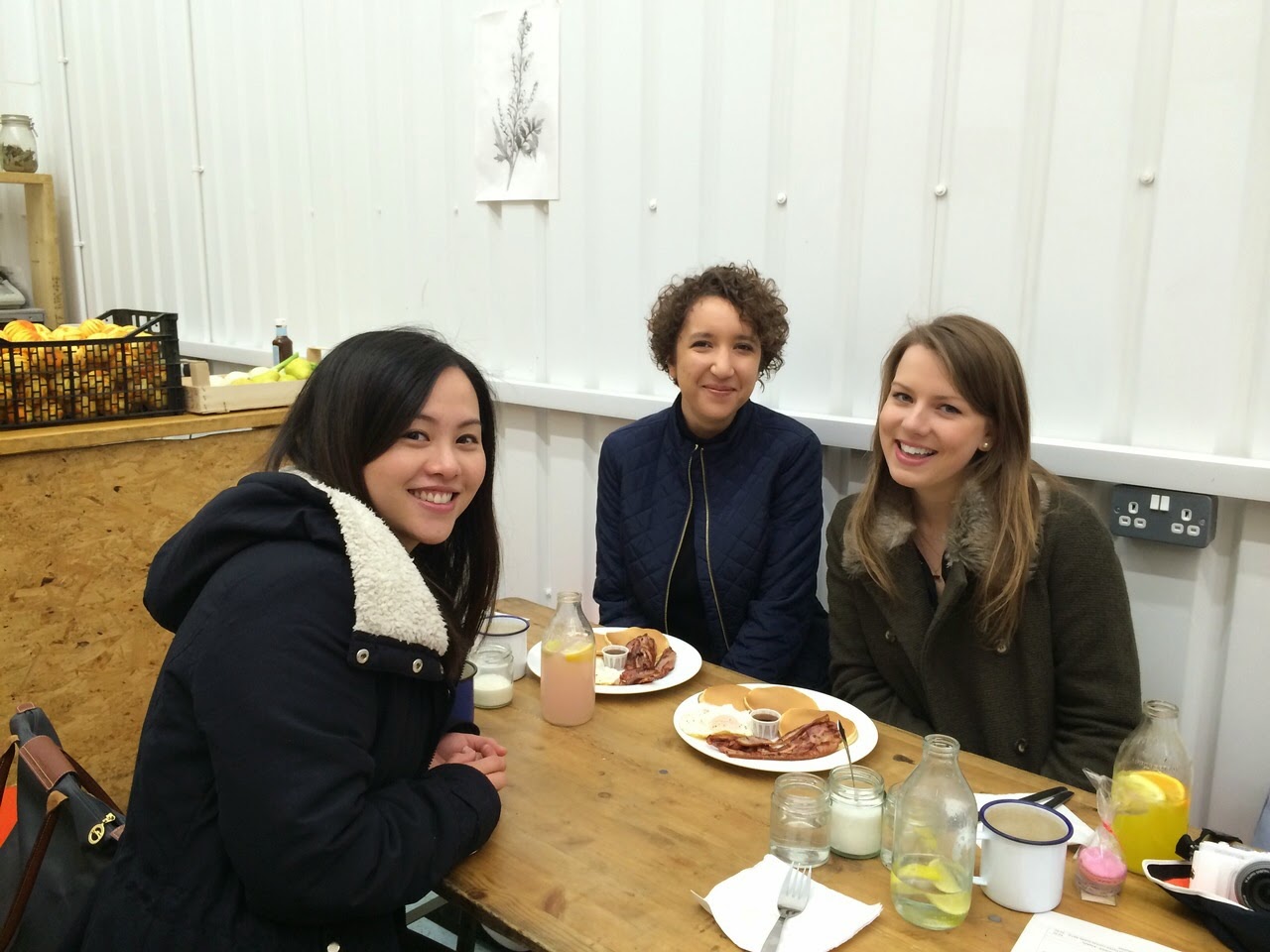 Square Root is an independent soda company based in E8, established in 2012 and making home brewed non-alcoholic fizz made from locally sourced ingredients, minimal sugar and no artificial flavourings. Bottled on site, they’ve set up this pop-up next door in a space that is completely unsuspecting. Basic in its set-up but certainly very cosy, we were the only punters at that point, but the staff were super friendly and really enthusiastic about what they had going on. 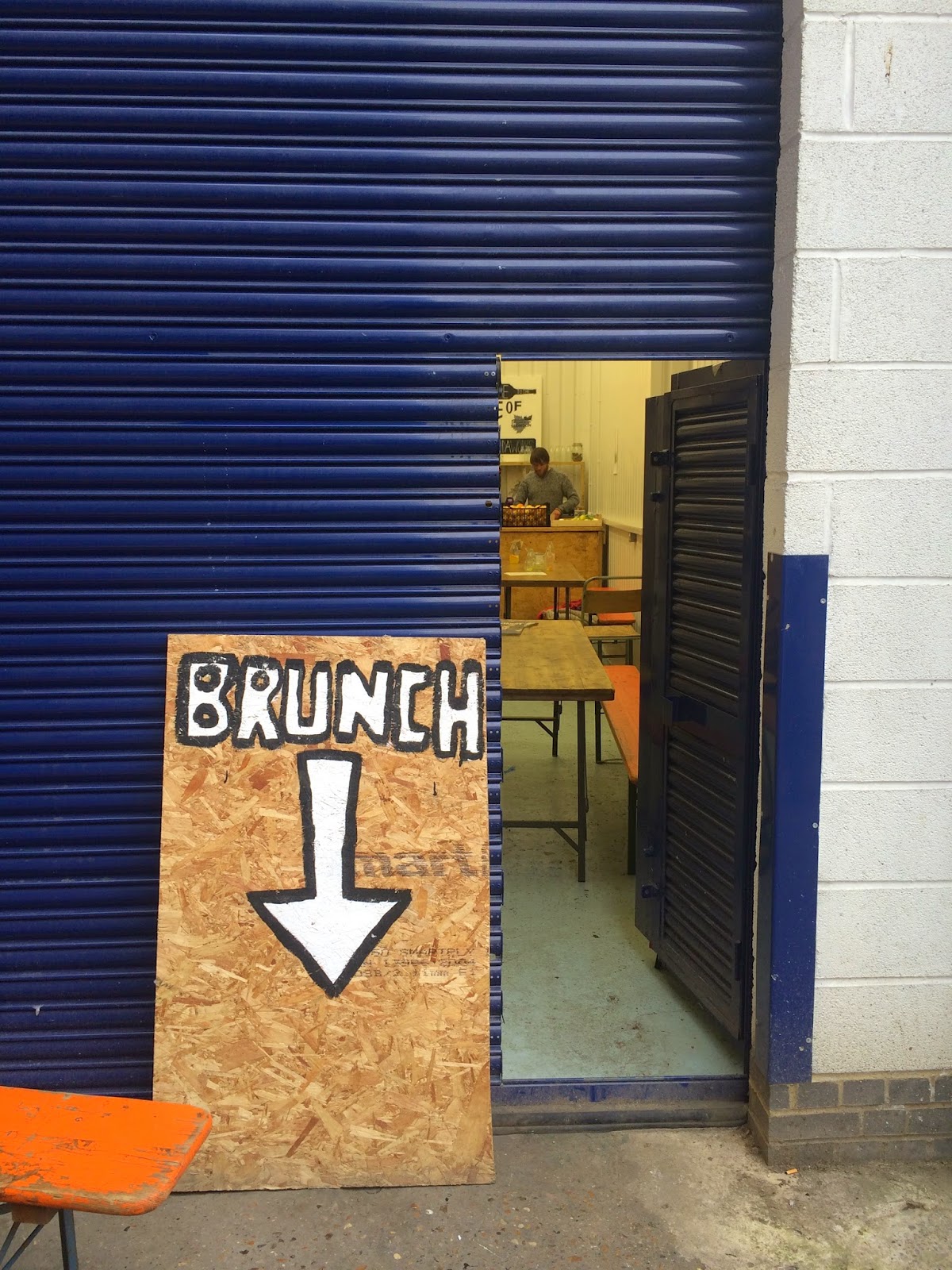 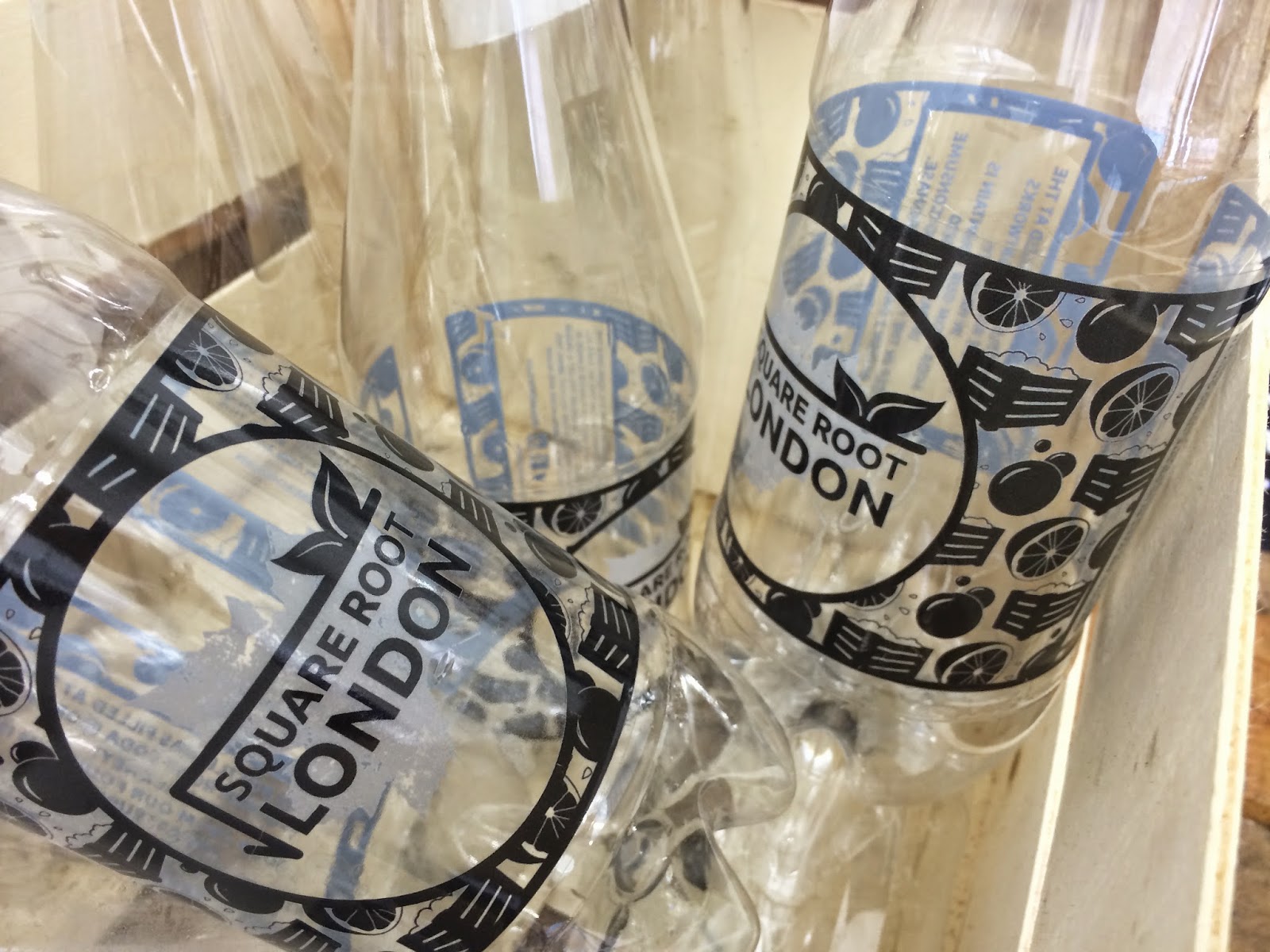 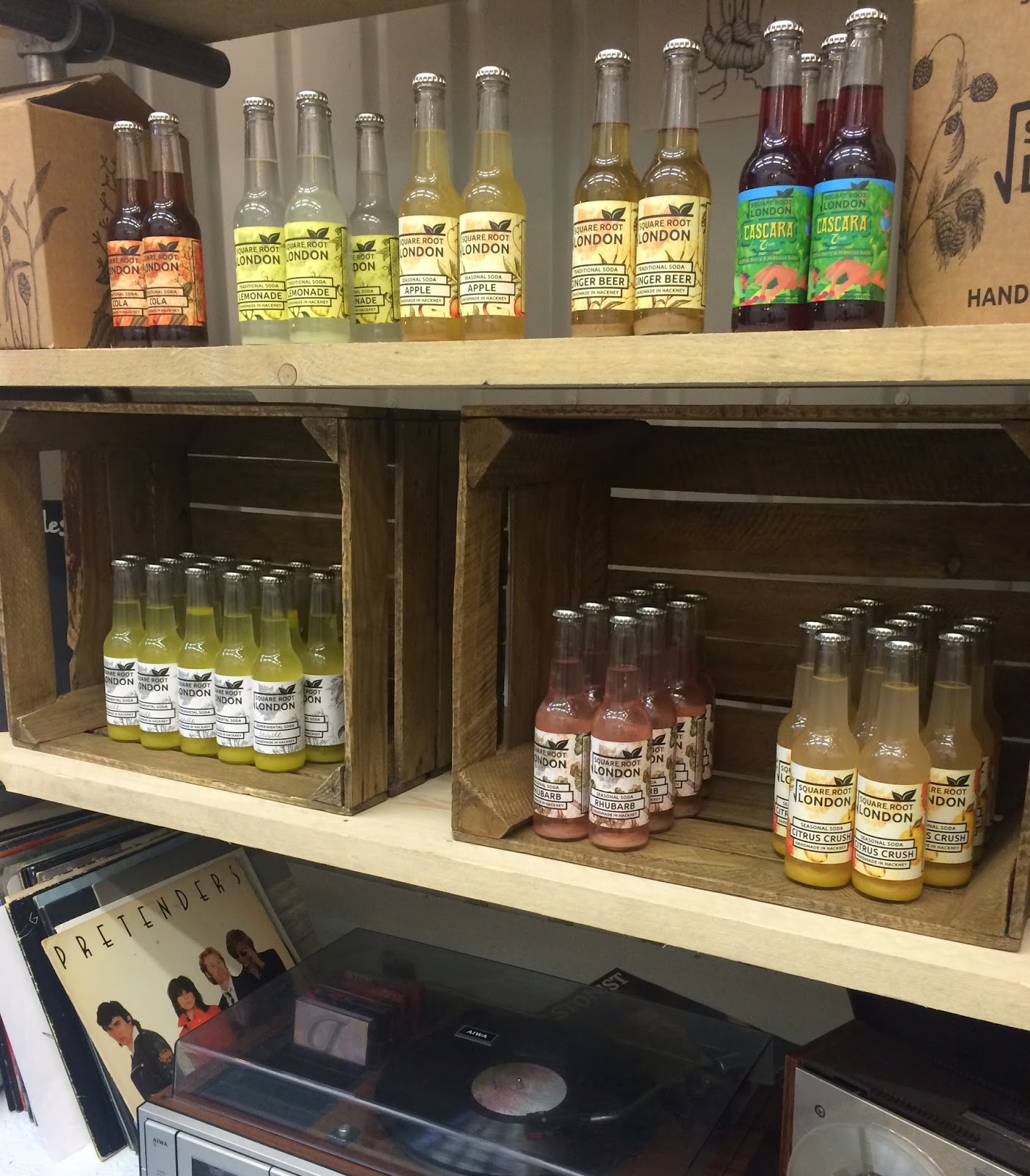 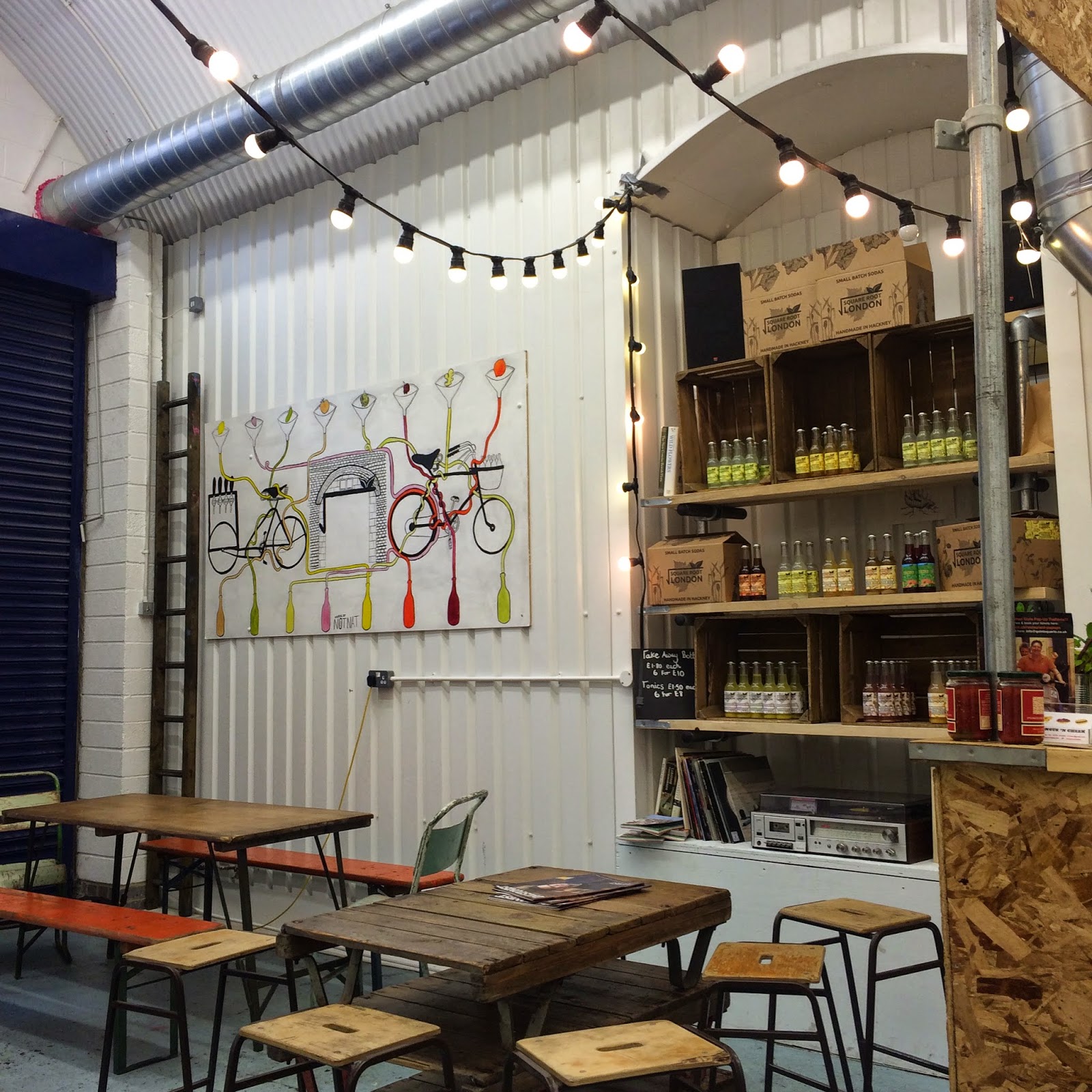 The building had taps at the ready for freshly poured sodas. Etta and Lucy went for the Valencia Orange, but after my recent obsession with Cawston Press, I could not resist the seasonal Rhubarb flavour. It was tangy and sweet, and the soda bubbles weren’t overly gassy so I pretty much downed mine! 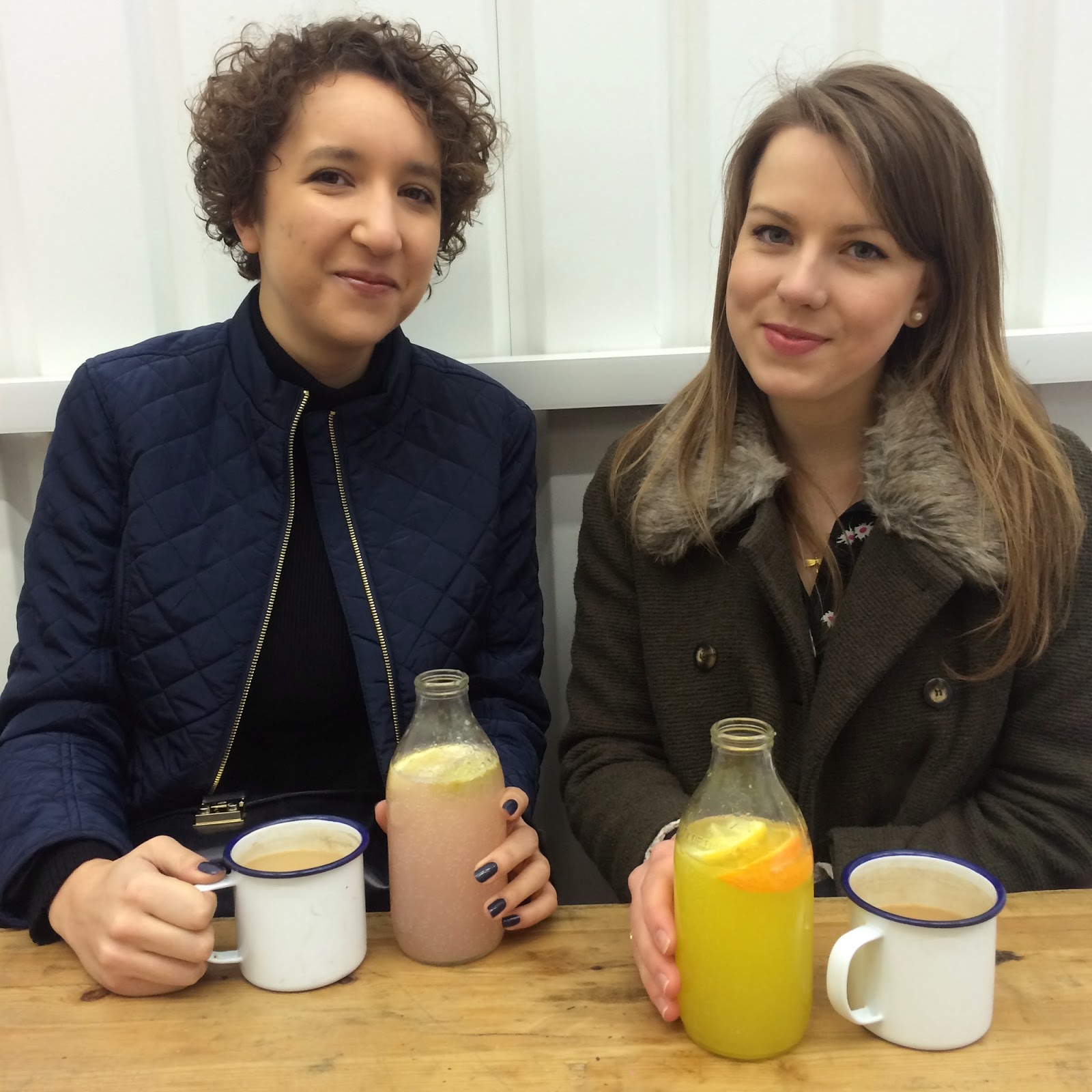 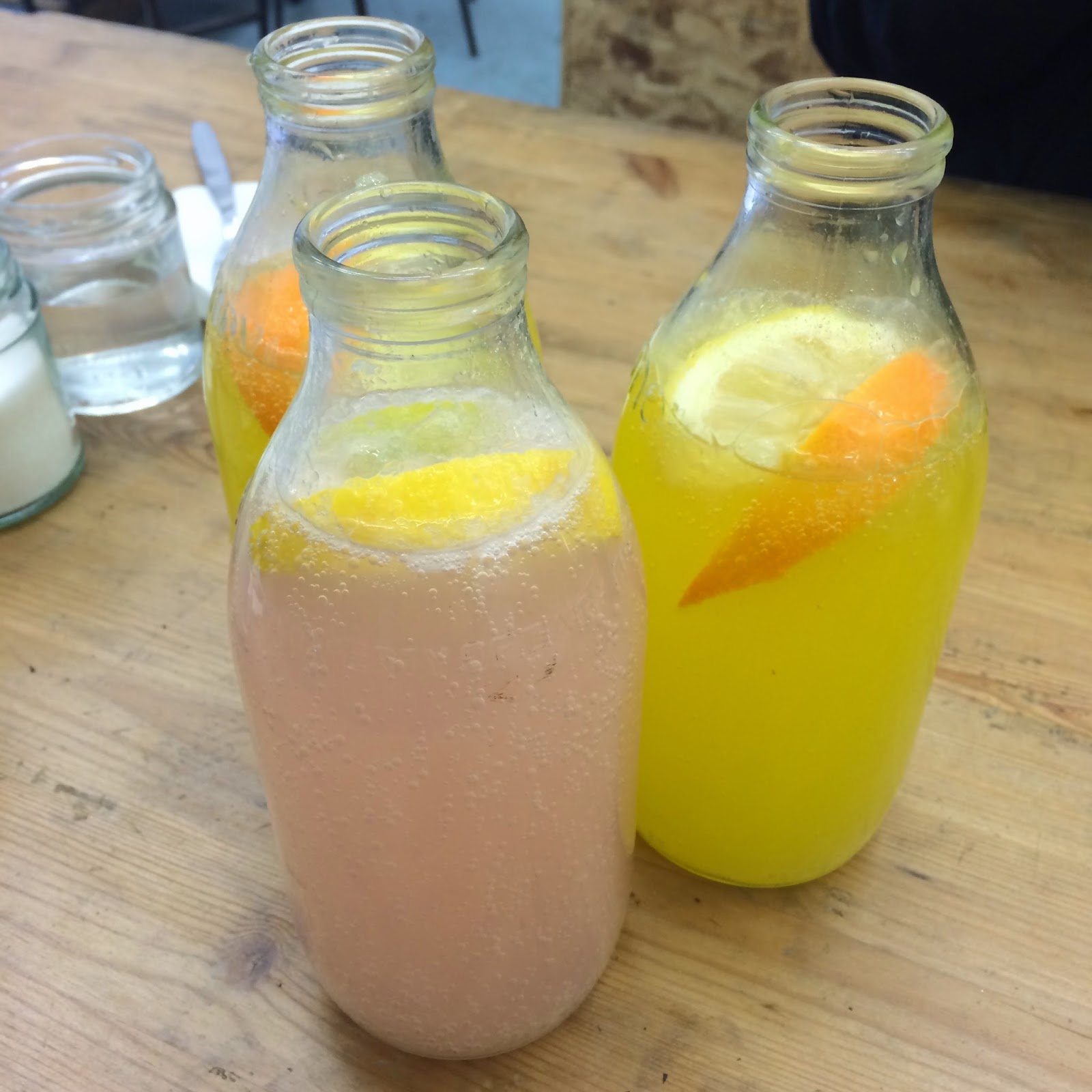 The food is served up by Tongue ‘n Cheek, sustainable produce peeps that bash out awesome street grub around London. There was a blend of North American and Asian dishes and flavours on offer, and luckily for us we had Lucy to explain some of the more unfamiliar ingredients on the menu. And the best thing about eating out with other foodies? You get to order everything and not one person dives in for a taste before everyone has taken their photos!

Etta and I both couldn’t resist American style pancakes with streaky bacon, free range egg and organic maple syrup. Often I can find streaky bacon too dry, but this was unbelievably juicy and full of flavour – a real testament to where it was sourced: The Butchery, London Fields. The pancakes were fluffy and not too doughy as can sometimes be the case with American style. 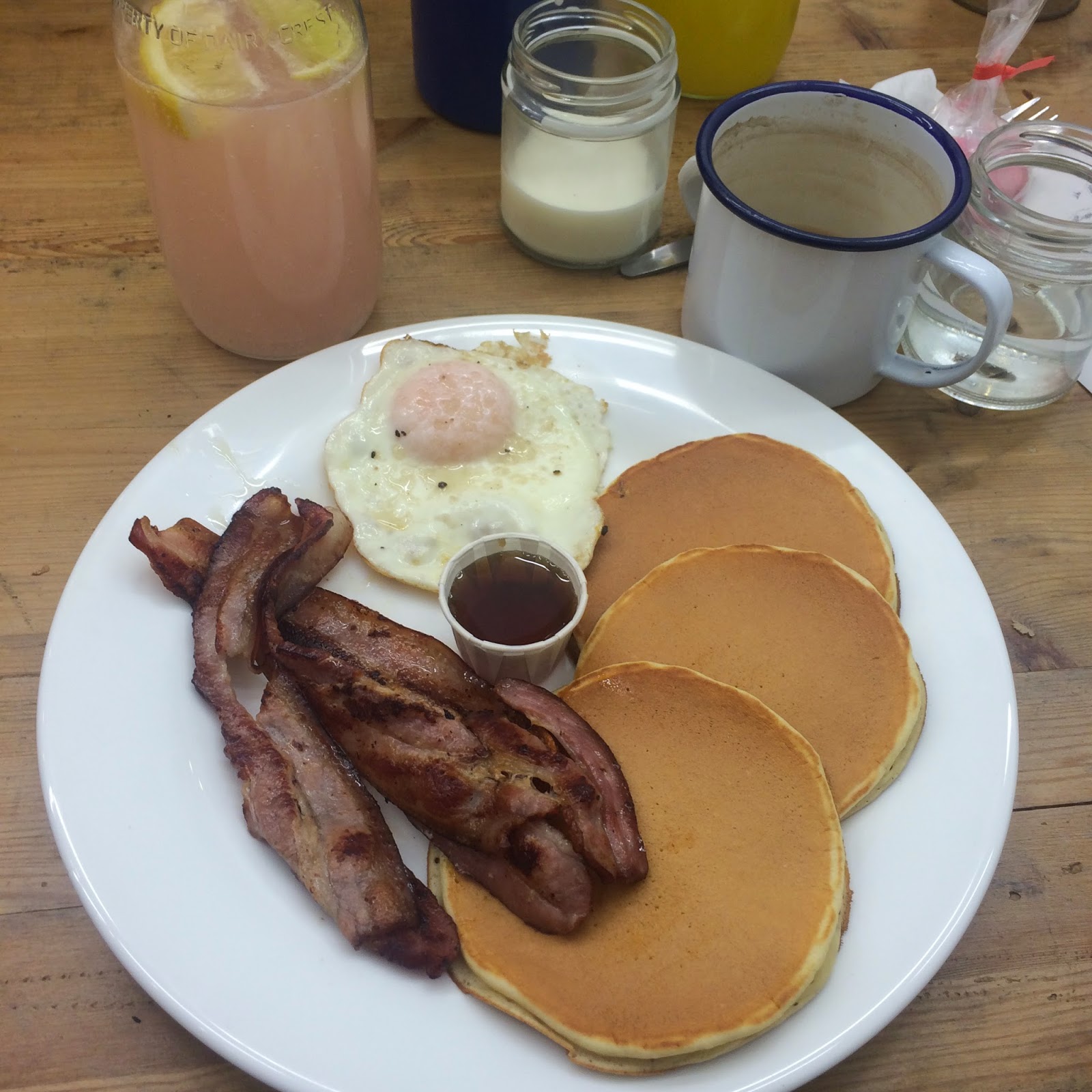 Lucy went for pancakes as well but this time served up with persimmon jam, anko, matcha sauce and whipped cream. Anko is a red bean paste, something that I became very familiar with on my trip to Beijing, but I have to say I’m not a huge fan. I find it very bland and this wasn’t very different. Thankfully, the other three toppings were delicious; the persimmon jam was tart, the matcha sauce added some welcome bitterness to the sweet whipped cream. In fact, the cream was so good, we may have just eaten it with a spoon at the end… 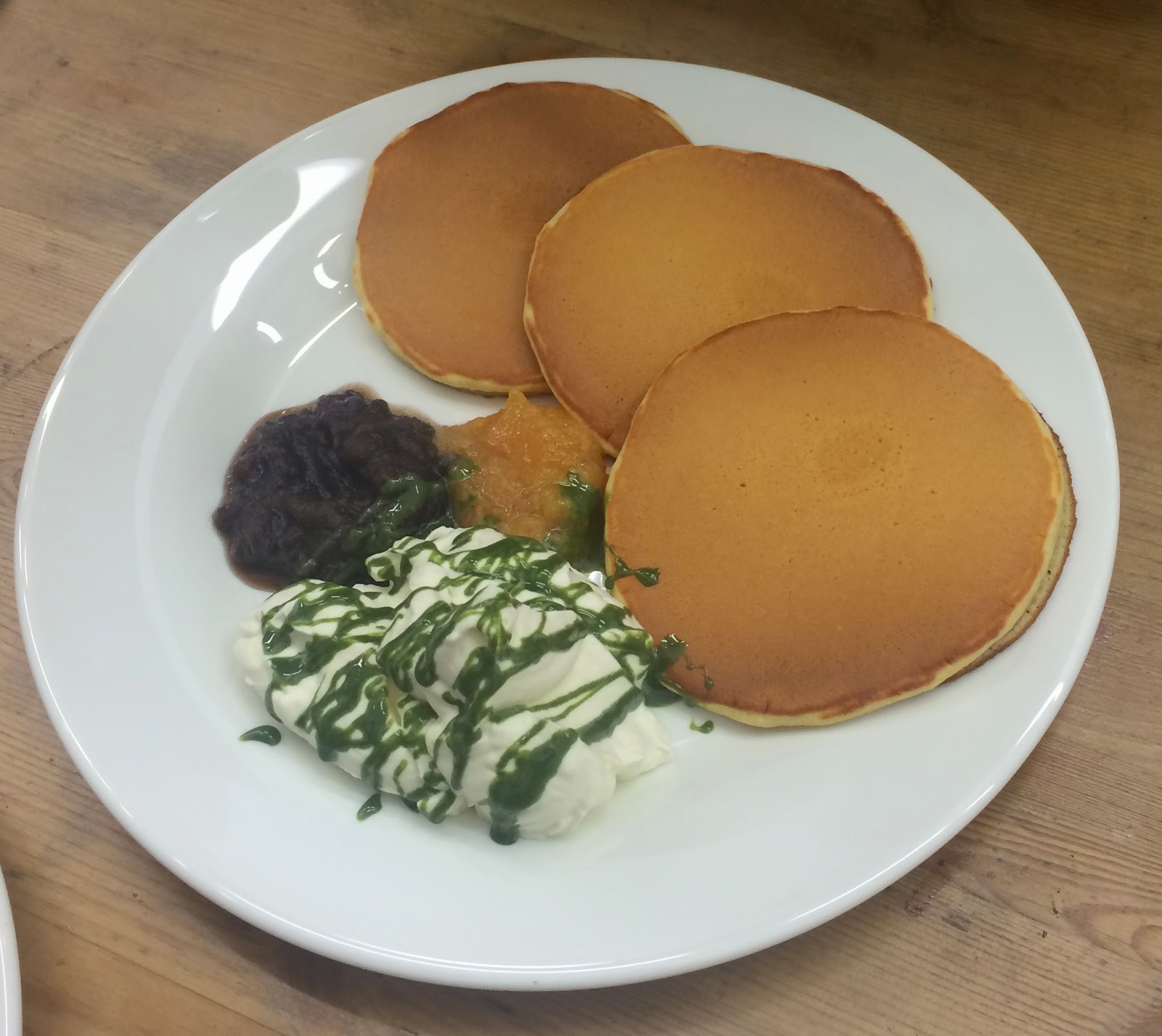 We also ordered some onsen eggs as Etta and I had never tried them before. They are a bit like poached eggs, but cooked in a way that the white is silky and the yolk is firm but still tastes like it’s soft. We had the Allo Diavolo: which had the egg served up with spicy n’duja (an Italian sausage), sauteed organic plum tomatoes, caerphilly cheese and parsley, presented with thick sourdough soldiers. With the spicy kick and the tomato base, it was almost like a mini Turkish Menemen and it was really very, very good. 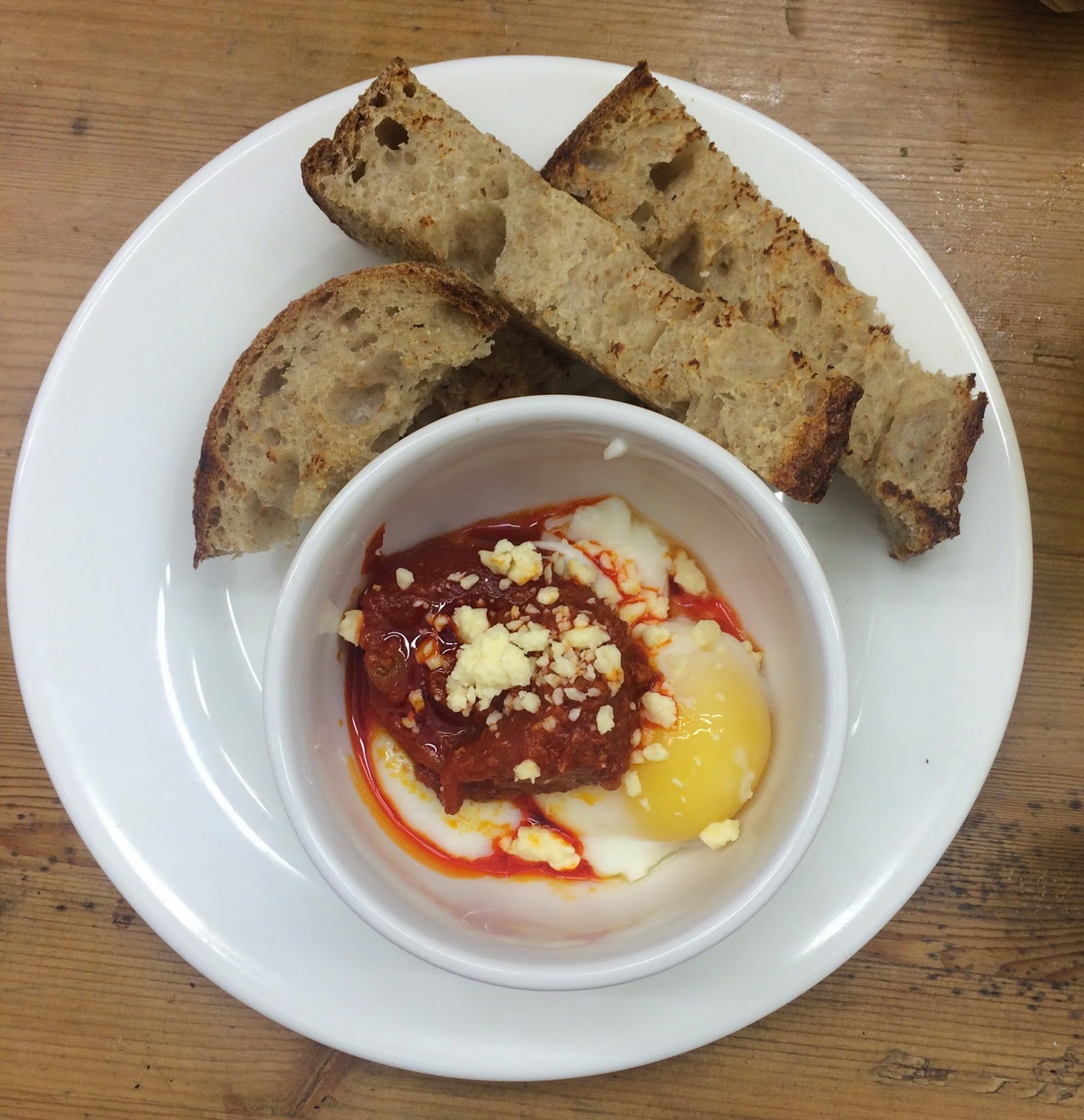 I was so incredibly full when we left and riding on a high of blogger love, carbs and sugar – all of which later on would lead me to really desperately needing a nap. Head down to Hackney and show your appreciation for local artisans showing the big-wigs how to do it.