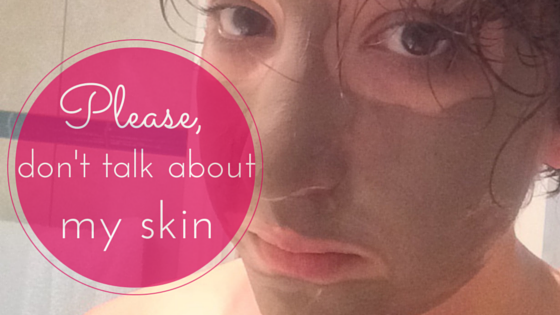 I’ve had acne since I was about 21. I have no idea what triggered it, but try as I might it will not shift. I’ve read every trick in the book to try and get rid of it: stopping drinking, cutting out gluten, trying every cosmetic ever recommended in every magazine. I take my make-up off before bed, I try not to touch my face at all and I more than regularly change my pillow cases. I’ve even changed my contraception in the hope that that might work. Nothing changes though. It doesn’t matter how clean my lifestyle, I relentlessly have these bloody marks on my face.

I’ve found a foundation that covers it enough but I try whenever possible to go make-up free in the blind hope that I’ll be magically cured by some sunshine. When around friends and family I feel more comfortable being bare-faced, but as time has gone on I’m less fussed about who sees me because I’m kind of tired of giving a crap.

That’s why, on my recent trip to Barcelona, I didn’t wear make-up on the plane. I never do when I fly, and who was I going to see at 5am in Gatwick that I cared about anyway? I got to the apartment we were renting for my sister-in-law’s hen do with the intention of ditching my bag, putting some slap on and going for a wander before the rest of the party arrived. I arrived earlier than expected so the landlord kindly took my bag into storage, my foundation and concealer along with it. It didn’t bother me and I was blissfully happy on my own, meandering through the streets of Barcelona alone.

I found a place to sit and have lunch in the sunshine and the woman next to me struck up a conversation. Now I love this; having travelled alone before, there’s nothing better than meeting like-minded solo tourists and having a chat. It quickly dawned on me that she was in fact, slightly strange, but hey, I’m British and I’ll be polite until the end. She started telling me that she’s a dermatologist and insisted on writing recommendations down for me, telling me I could have them for free if I just bought her a drink (how about no…). I declined and tried to read my book, realising that maybe this conversation wasn’t quite as pleasant as I’d initially thought. She persisted though, and maybe it was a dodgy translation but she said, “You should listen to me, your skin is ugly.”

I almost punched her. I wanted to walk away but I’d already ordered my food. I didn’t know what to do; I was on the verge of tears and suddenly very aware that she was just saying what everyone else must have been thinking. She kept trying to pull me into conversation (I think my face told her that she’d overstepped the mark) but by this point I had just retreated into one tiny fixed smile/grimace and held my book as close to my face as possible.

It’s taken me years to accept that I’m blighted with this damn bloody condition and one small remark from a stranger has made me feel, in her words, ugly. I’m not sure where to go from here. Maybe it’s time to finally demand proper medical assistance beyond the topical creams I’ve previously been prescribed. I’m trying not to become too reliant on make-up again but it feels like the easy option right now. I want to continue my ‘fuck it’ attitude but it’s not so easy to do when you actually do care. And now I do. I do care. I care if people think my skin is ugly but I’m totally powerless to do anything about it; all I can do is carry on as usual, but for now at least it’s with that niggling voice in the back of my head telling me to cover up.