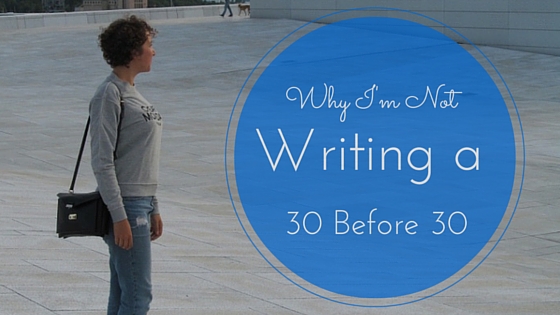 Today is my 27th birthday. When a whole day is dedicated to reminding you that you’re getting older and there’s absolutely no way of stopping it, you do tend to think about life so far and what’s in store for you in the future. I tend to wonder how the hell it’s been five years since I graduated university, if I’ll ever be able to afford a house, and if all the cake I eat on my birthday is the sole reason I have cellulite on my thighs (probabaly, but never mind ey?).

There seems to be a trend for those in their 20s to start composing lists of what they want to achieve before they hit 30, almost like a list of character flaws they need to rectify before they become an acceptable human being. These lists don’t tend to be particularly original. After all nobody is likely to say, ‘By the time I’m 30 I’d like to still be renting a flat with strangers, have grown my virginity back and be claiming Job Seeker’s.’ But generally they follow the same six themes:

1) Changing appearance eg. I want to get a tattoo

2) Relationships eg. I want to get married

6) Culture eg. I want to read a book a month

It’s great to accept that you haven’t got everything you may want in life yet, but wouldn’t life be chronically dull if you’d ticked all those boxes in your 20s? But think about what’s really important here: is learning to like vegetables REALLY on your life’s big to-do list? Does the fact that you don’t listen to vinyl rob you of sleep every night? Maybe you don’t like vegetables; get your vitamins from somewhere else! Maybe you don’t like listening to music on vinyl; let me introduce you to Spotify!

And why 30? Why not now? Why not 34? What is so magical about this number? Nothing happens at the stroke of midnight on your 30th birthday to announce that you are now officially an adult. It’s healthy to have ambition, but it’s damn right ludicrous to nail a time and a date to such abstract plans. Imagine the misery if you hit 30 and you’ve only crossed three things off that list? You know, 30 isn’t old. If you’re going to plan for your future, don’t stop short at pre-middle age – that seems ironically short-sighted.

’30 Before 30′ lists are really just glorified New Year resolutions. Those promises we make to our ourselves on January 1st seem achievable because we have a whole year to do them. If I set myself a list of 30 goals for the next three years it seems a bit lazy because ultimately I won’t think about them again until I’m 29 years and 11 months. Plenty of other things will take precedent in that time, including but not limited to, ‘What will I have for lunch?’ ‘Where did I put that thing?’ and ‘How can I get more sleep even though I have to get up now?’

Because if you really want it, you’ll do it. I believe in you, no matter what age you are!