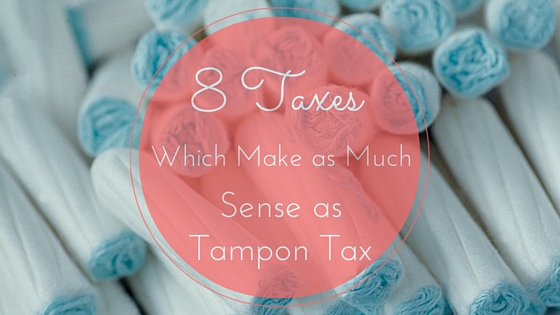 According to the government, sanitary products are a ‘luxury’ item. So lucky are half the population of the country to bleed from their genitals every month that those guys in Westminster think it’s totally fair to charge 5% tax on the items that help a gal out. I mean, it’s not like we don’t have a choice right? I remember that day when I was 12 years old, excitedly skipping to Boots and signing up for menstruation, gleeful that decades of cramps and mood swings were ahead of me. I mean, who DOESN’T want to insert cotton wool into their private parts? Gee whizz, we’re lucky.

So with that logic in mind, I’ve suggested a couple of other taxes that make total sense and should be implemented instantly:

1) Blinking tax
For every millisecond you waste shutting your eyes, at least 0.0000000000000001% productivity is wasted and you are essentially bringing down the economy. Don’t blink.

2) Sneezing tax
By potentially spreading germs you could be infecting other people which could put a strain on the NHS. Don’t sneeze.

3) Farting tax
Extra gases could be harmful towards the ozone layer. Don’t fart.

4) Thirst tax
If you drink water the oceans might run dry and the world will end. Don’t get thirsty.

6) Breathing tax
There’s too much carbon dioxide being dispelled and trees are thriving, which means we have to chop more of them down, and that costs money. Don’t breathe.

7) Sweating tax
Dogs pant and this appears to be an efficient way of saving energy. Sweating is purely a luxury and is unnecessary. Don’t sweat.

8) Dickhead tax
Because you genuinely cannot help being a dickhead *cough* MPs *cough* and as this isn’t a choice you should definitely get taxed for it. Don’t be a dickhead.