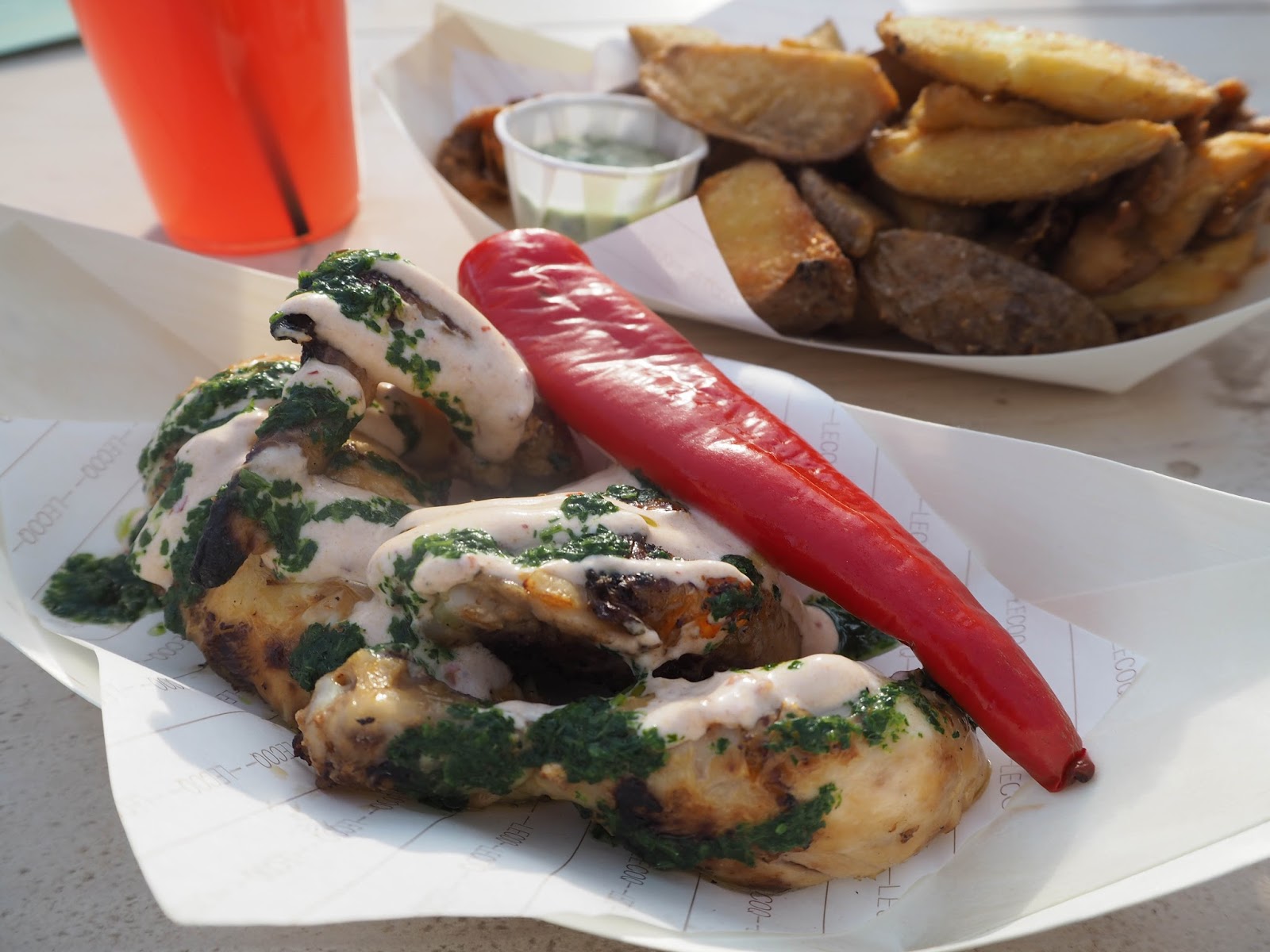 Lord knows Londoners love a rooftop in summertime. From Frank’s in Peckham to Queen of Hoxton, we all flock to a place that isn’t in the shade of a high rise in order to get the vitamin D we’ve all missed out on in our windowless offices. New on the scene is Pergola on the Roof*, making good use of the space at the top of Television Centre in White City.
Now the BBC have relocated north, the area is being turned into flats and a social hub, giving a bit more character to the area dominated by Westfield. 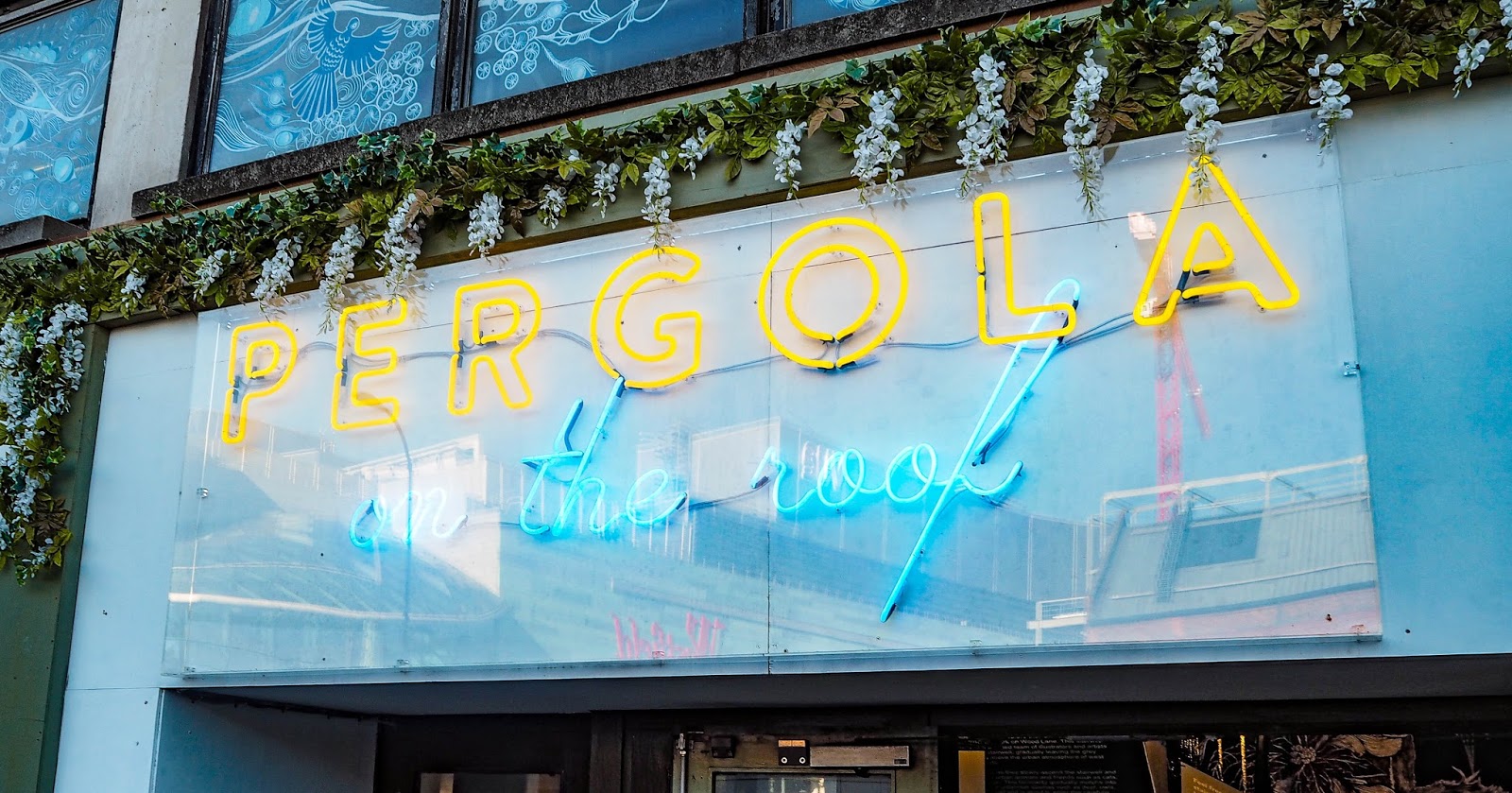 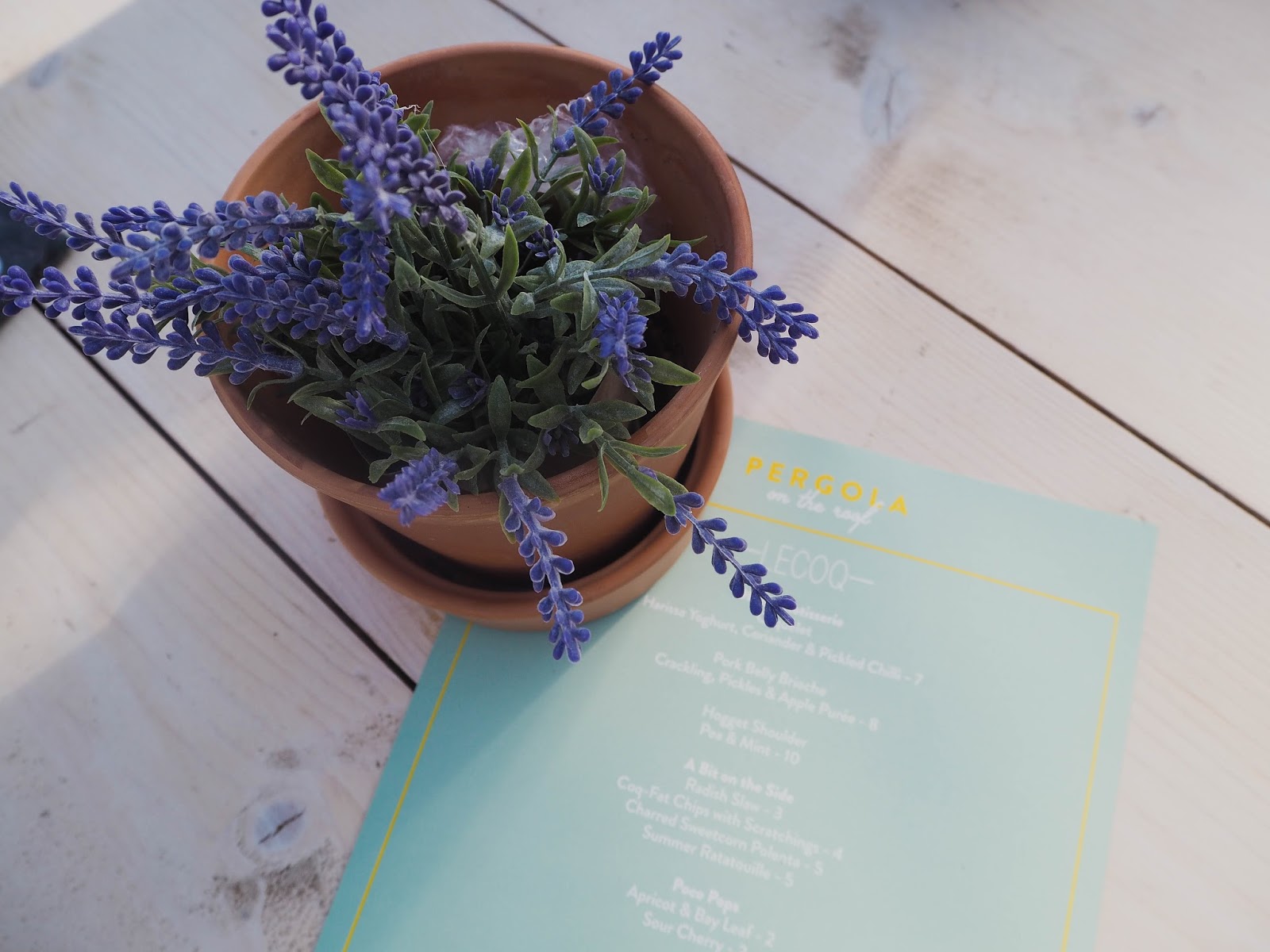 Predictably, the queue to get in is enormous, but if you have a group of six or more you can reserve a table for free and skip ahead of the masses. Well worth doing, as once they hit capacity it is a one-in, one-out situation and they (thankfully) don’t pack the place to the rafters so you could wait a while. 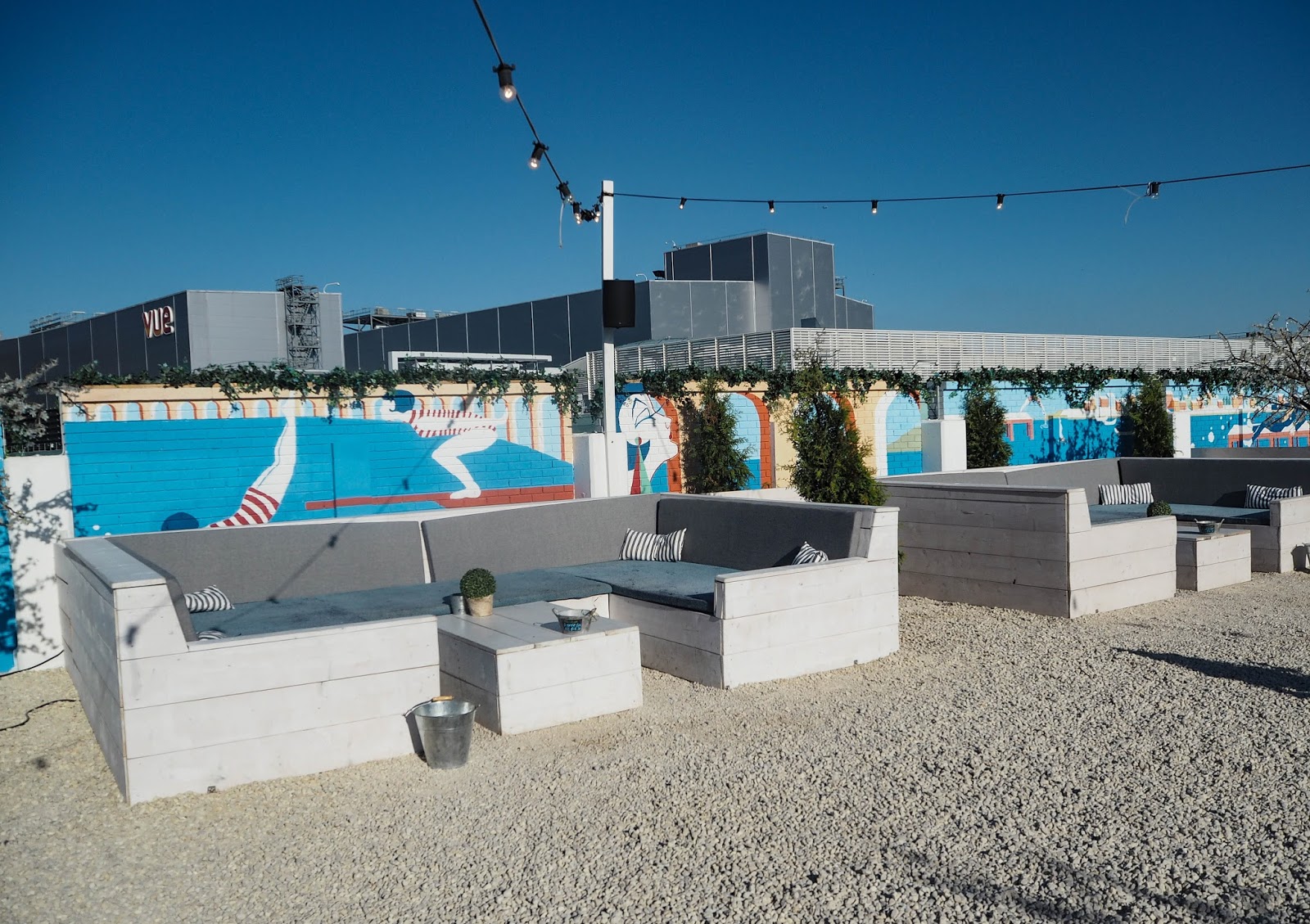 I skipped merrily into the lift, went 16 floors up and entered a rooftop with a decidedly Brighton-esque feel. Bright, beach hut pastels on the walls, white gravel and little picket fences separate each set of outdoor sofas from each other. Further in, each corner played host to an exciting London eatery, propped up in the middle by a communal bar and surrounded by turquoise picnic tables. And so the important decision of ‘What the hell do we eat?!’ began. Each place had at least four options on the menu, so it was a case of whittling it down and attempting to try a bit of everything. 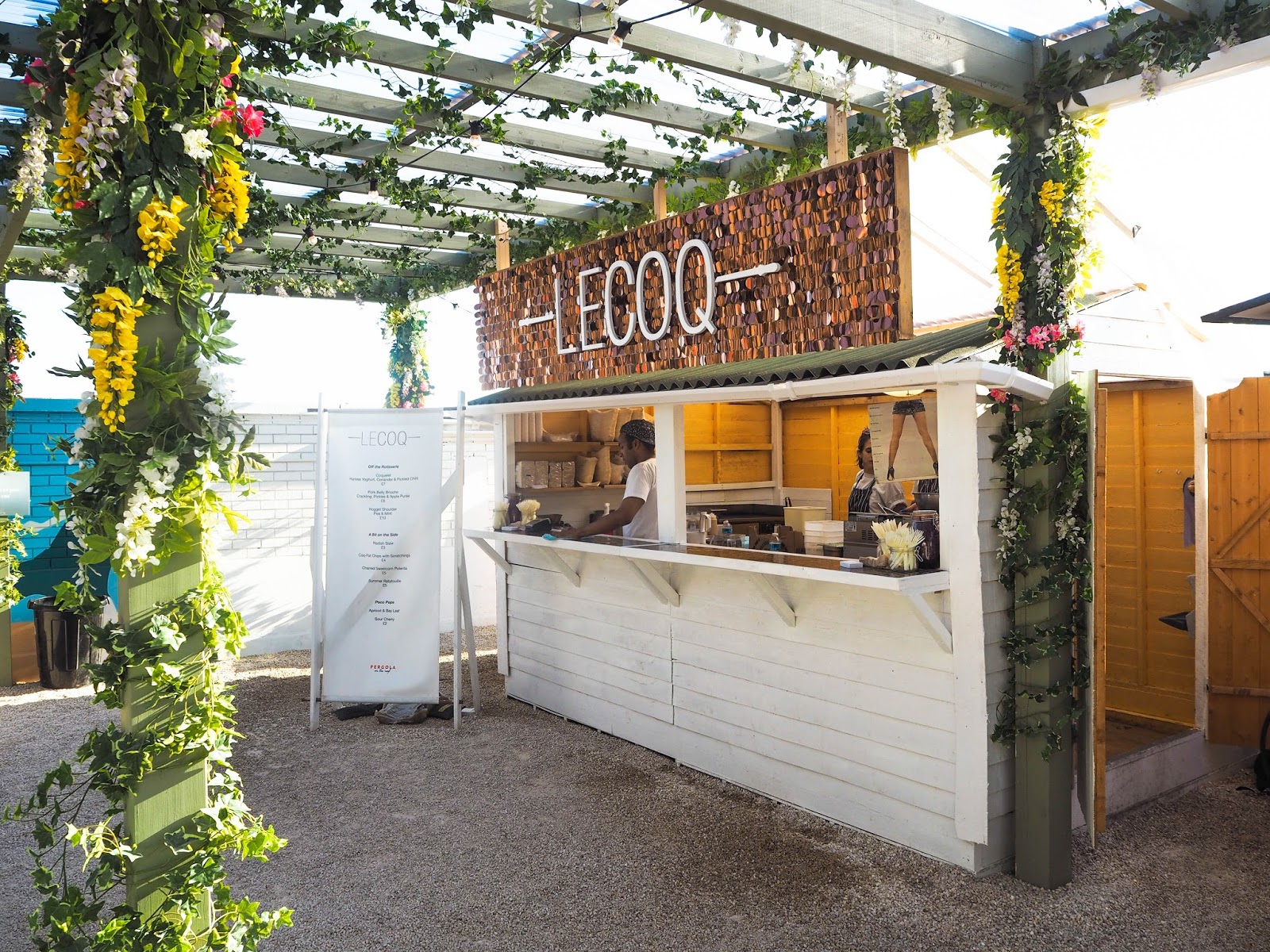 Without realising, I accidentally started with the best dish of the night. I really should have built up to it, but I knew, as soon as it was served up to me that it was going to be incredible. I had rotisserie chicken with harissa which was divine and served up with a big old chilli (which I took a chunk out of and promptly regretted!). But it was the chips that literally made me take a moment to freak the hell out. They were cooked in the chicken fat and they were everything a good chip should be: chunky, crispy and oh my god they were covered in scratchings! It was just sublime. 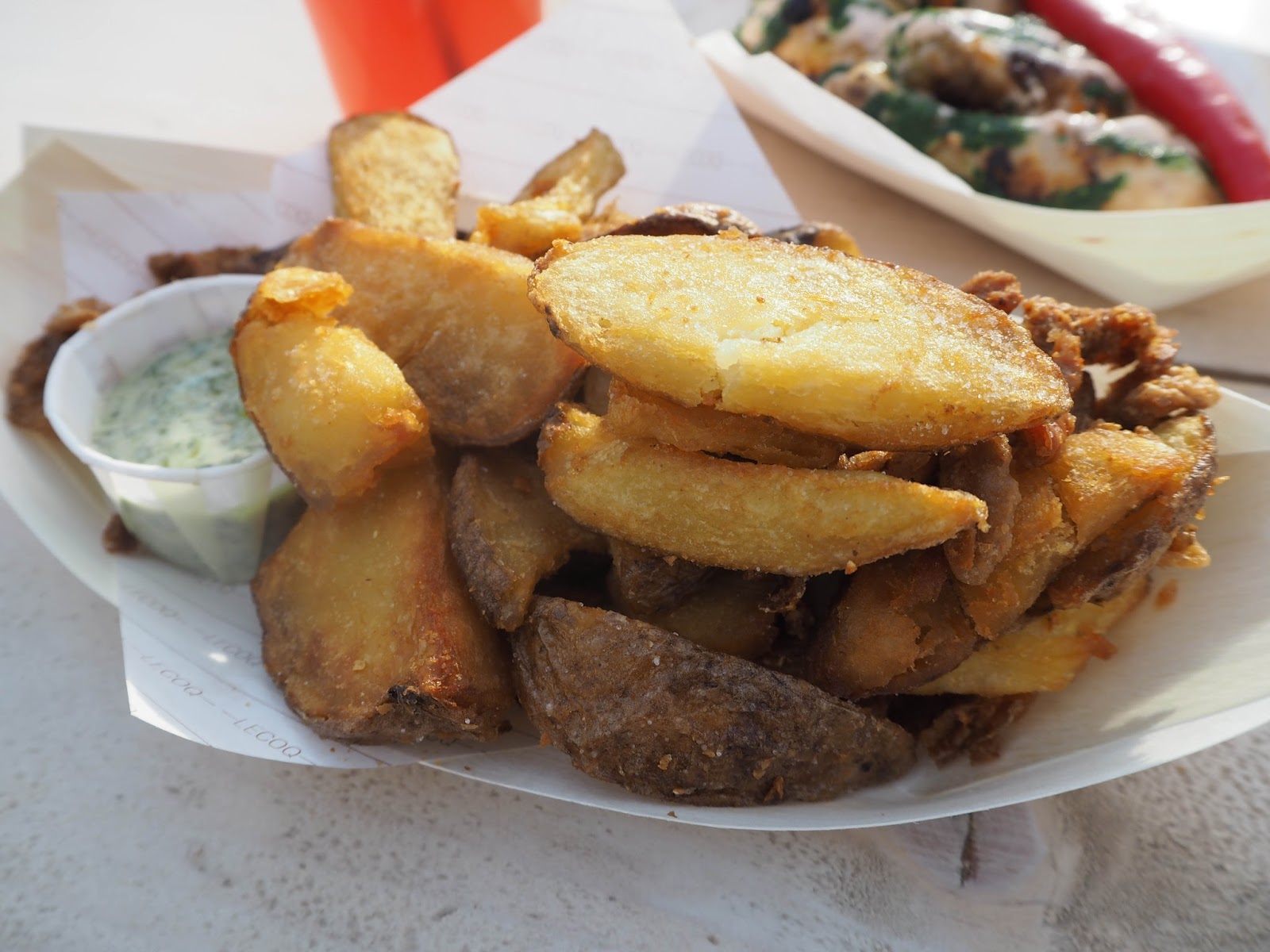 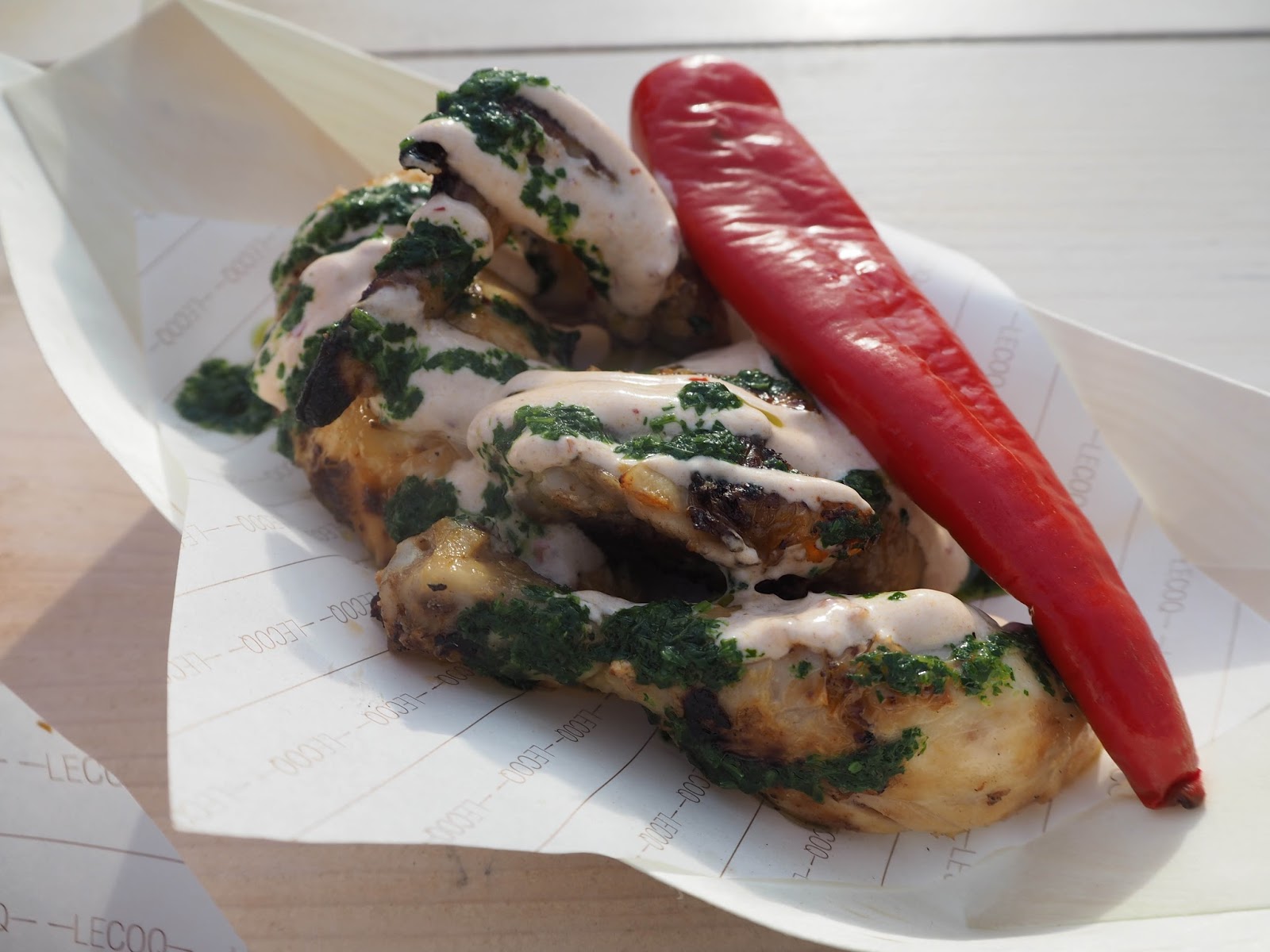 Next, a little something from Rabbit, the farm-to-table restaurant in Notting Hill. Being near on stuffed already, I went for a scallop, served in its shell and topped with a chorizo crumb. I loved the mix of textures, especially when joined with samphire, and the freshness of the scallop was so obvious. I rarely eat seafood in London, but I would definitely go back to Rabbit for more of those. 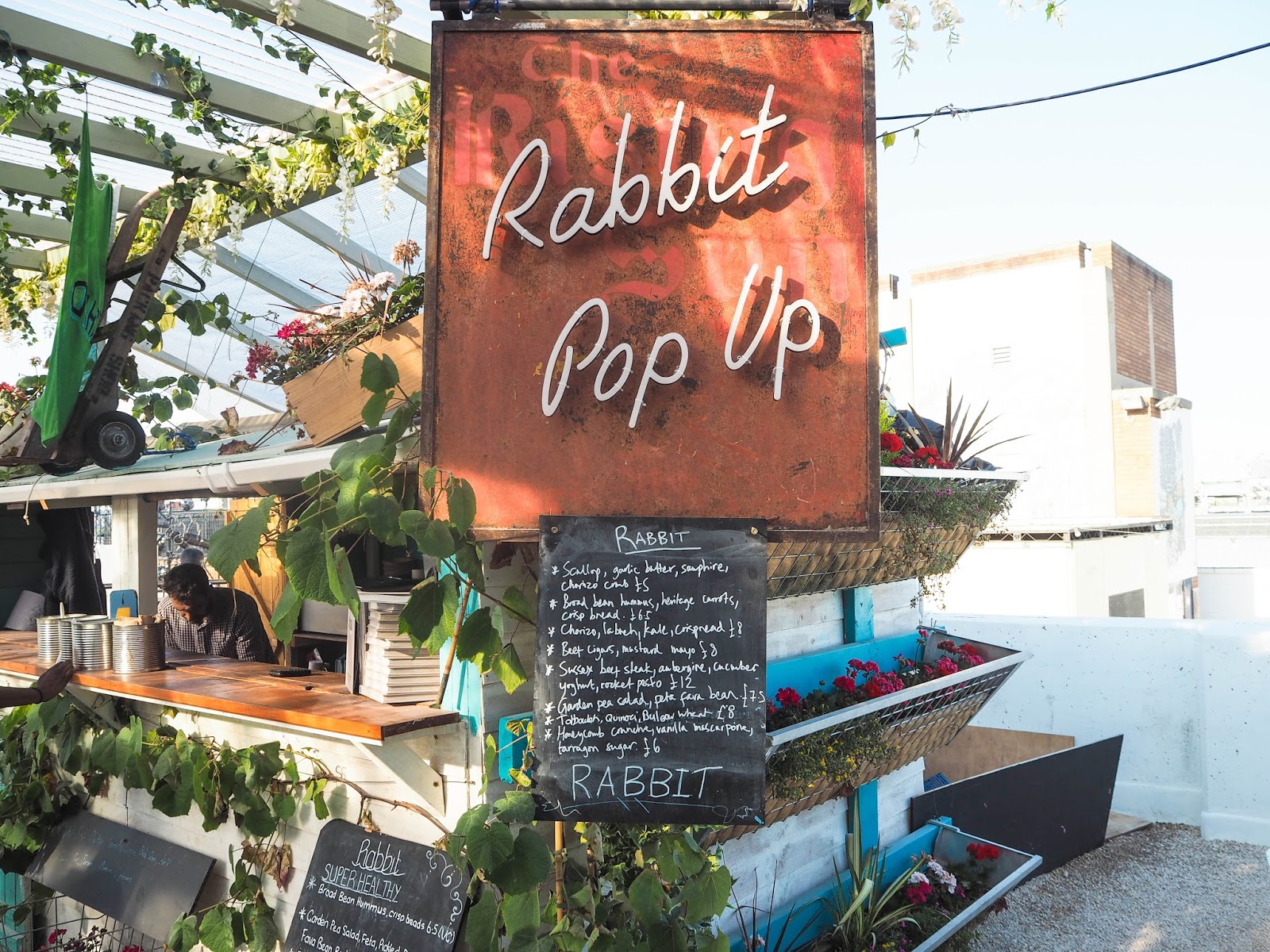 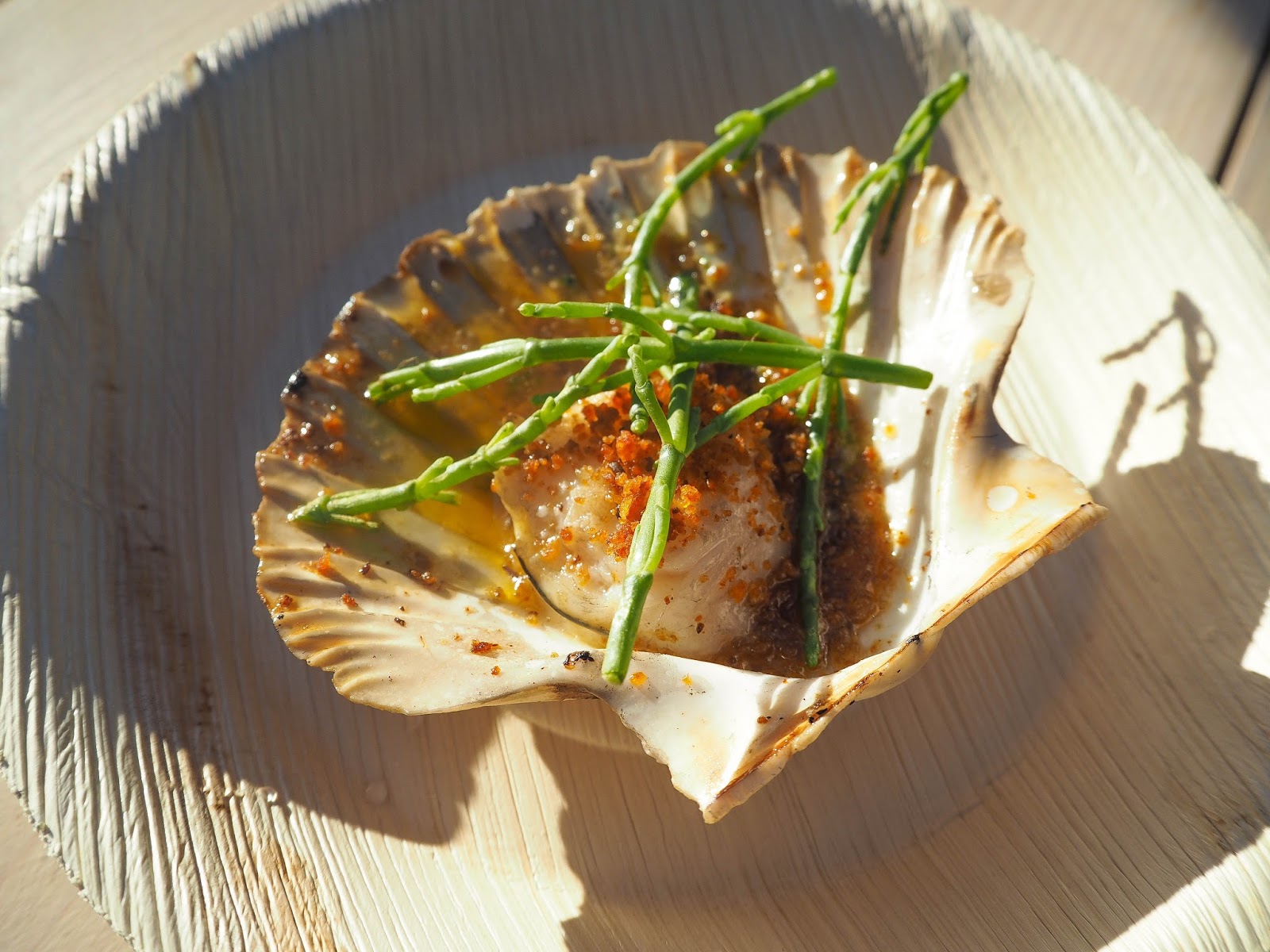 Even though I desperately wanted one of the deep fried courgette flowers from Salt Yard (they are literally one of my favourite dishes in London), I needed something sweet. The tapas joint from Goodge Street was also serving up their own version of Eton Mess – one of my summer favourites. It was the standard ingredients plus some flaked almonds, but it was the freshness that I needed after a lot of oil and carbs. 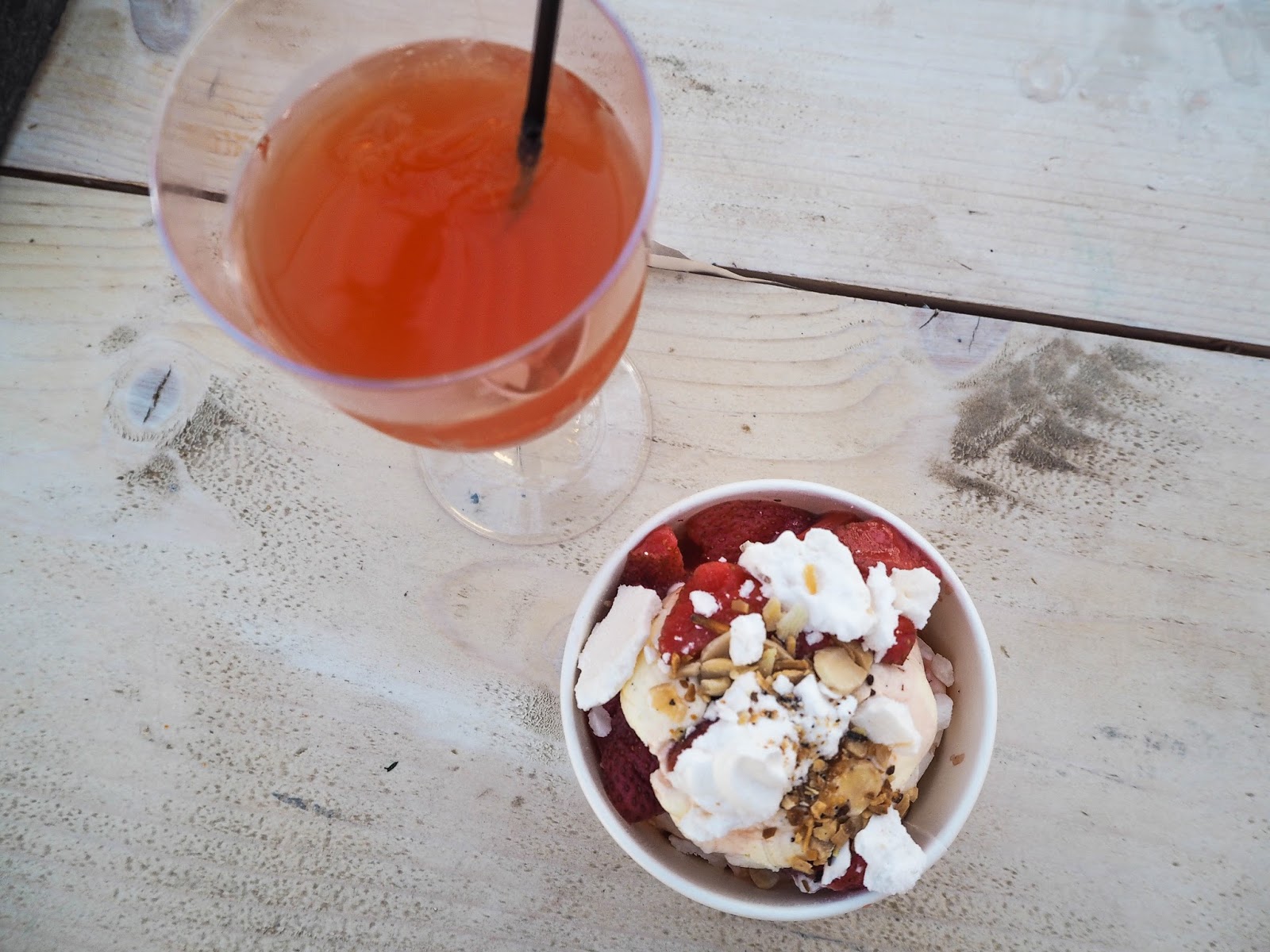 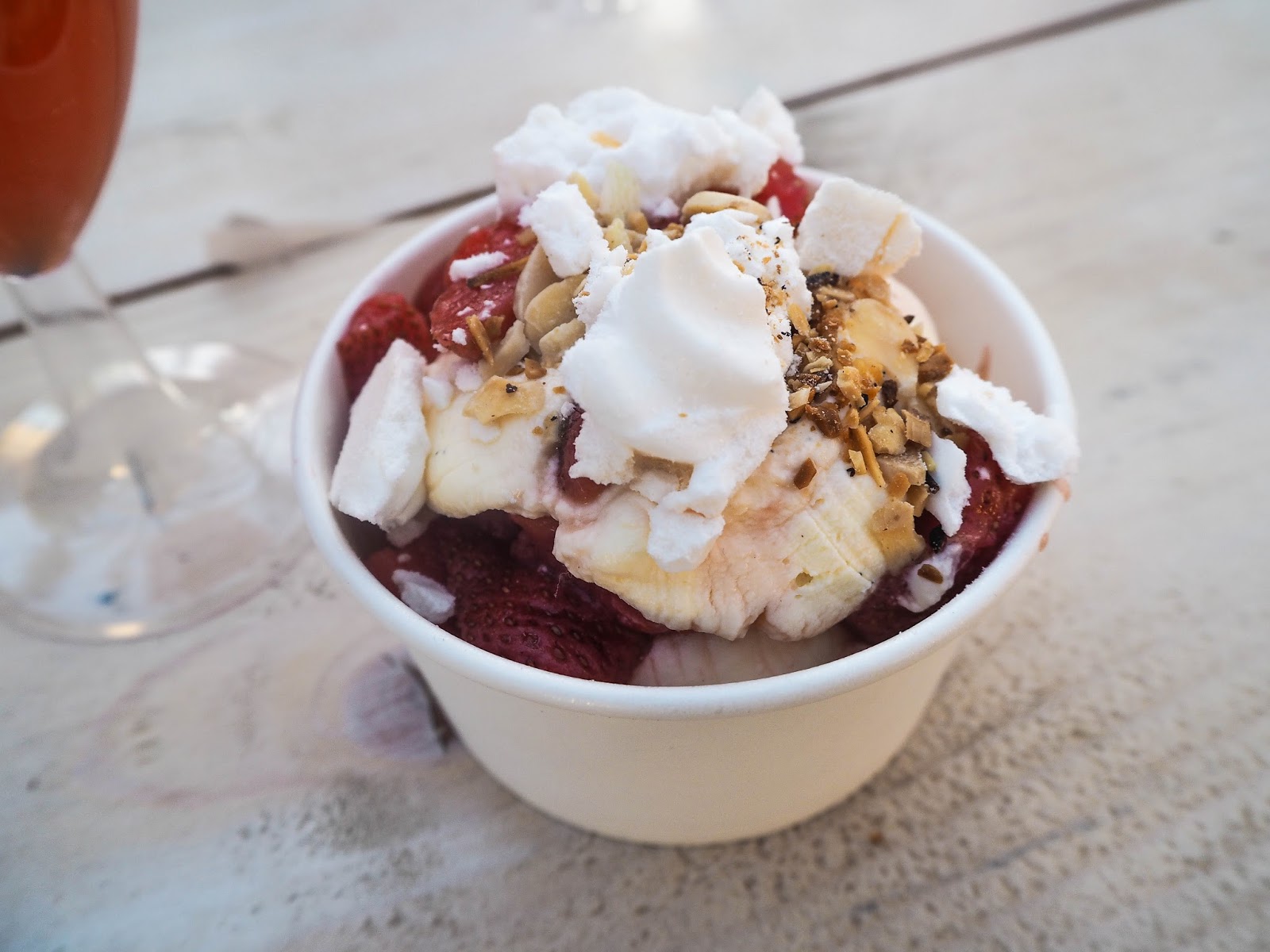 The bustle of Pergola on the Roof was a lovely escape from the manic streets below, and the perfect little sun trap. The girls and I had a couple of zesty, fruity cocktails and a good natter, and if anywhere can give me that AND good food, it’s a winner in my book. It’s open until 29th August, so go and have a gander if you’re west London bound, and seriously consider it anyway if you’re not.