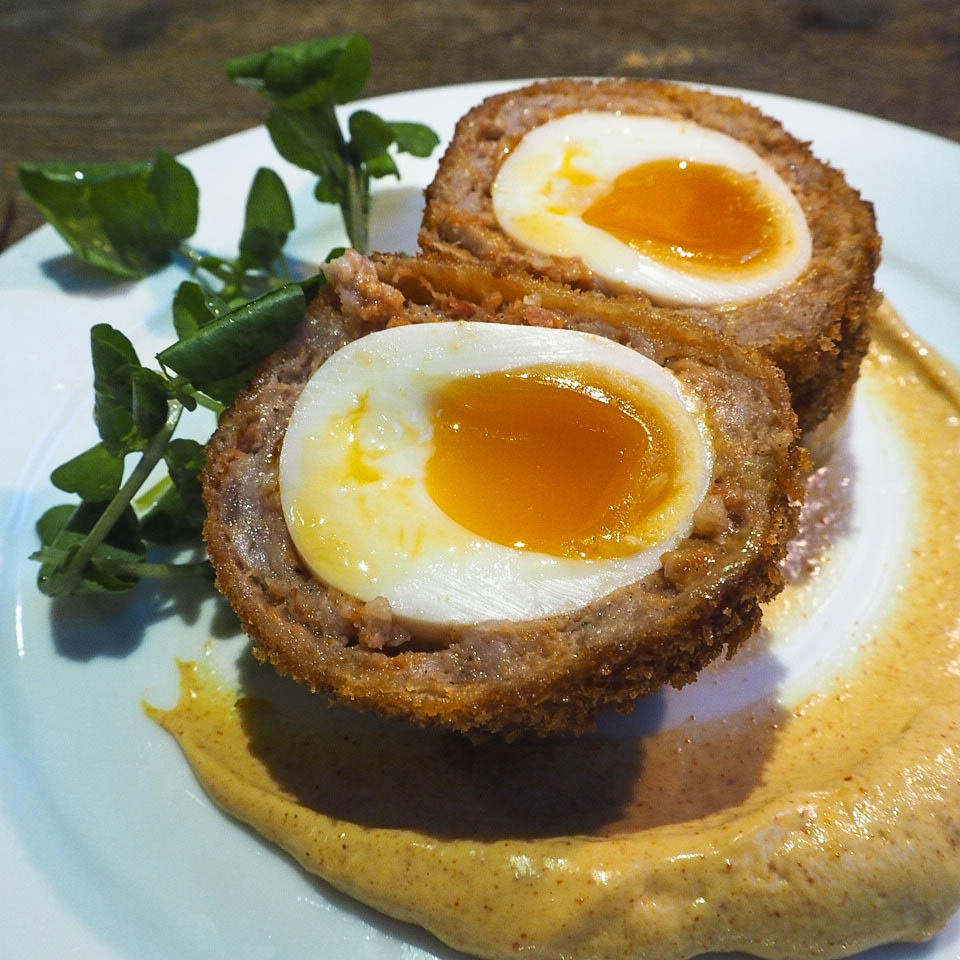 When it comes to pub food there’s a gap in the market between reheated frozen lasagne and Michelin starred cuisine. You take a risk eating somewhere who, up front, deals predominantly in pints, but it paid off at The Happenstance.

Sat in the shadow of St Paul’s Cathedral, you’re initially greeted by the classic City crowd who couldn’t fit into Paternoster Square, but going into the back is a vast dining space with open kitchen, dimmed lights setting a pleasantly different mood to that of the bar. We settled in with some classic Old Fashioneds and perused the menu. 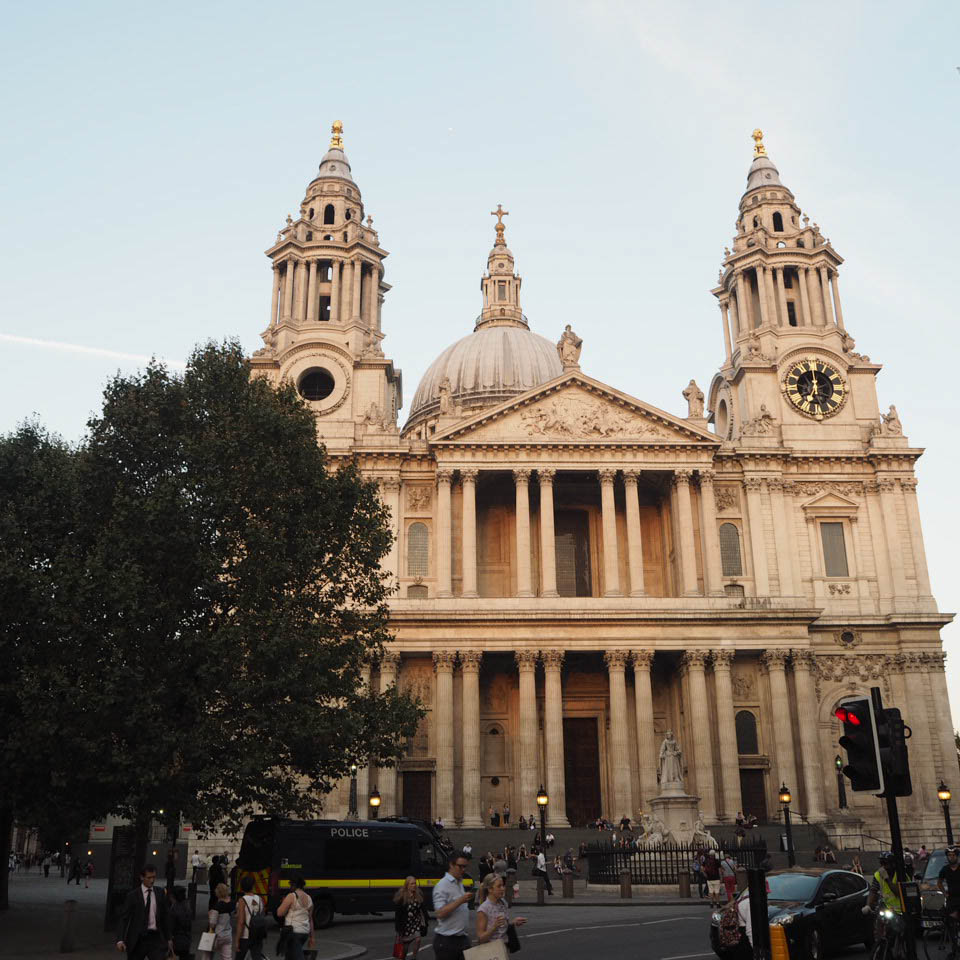 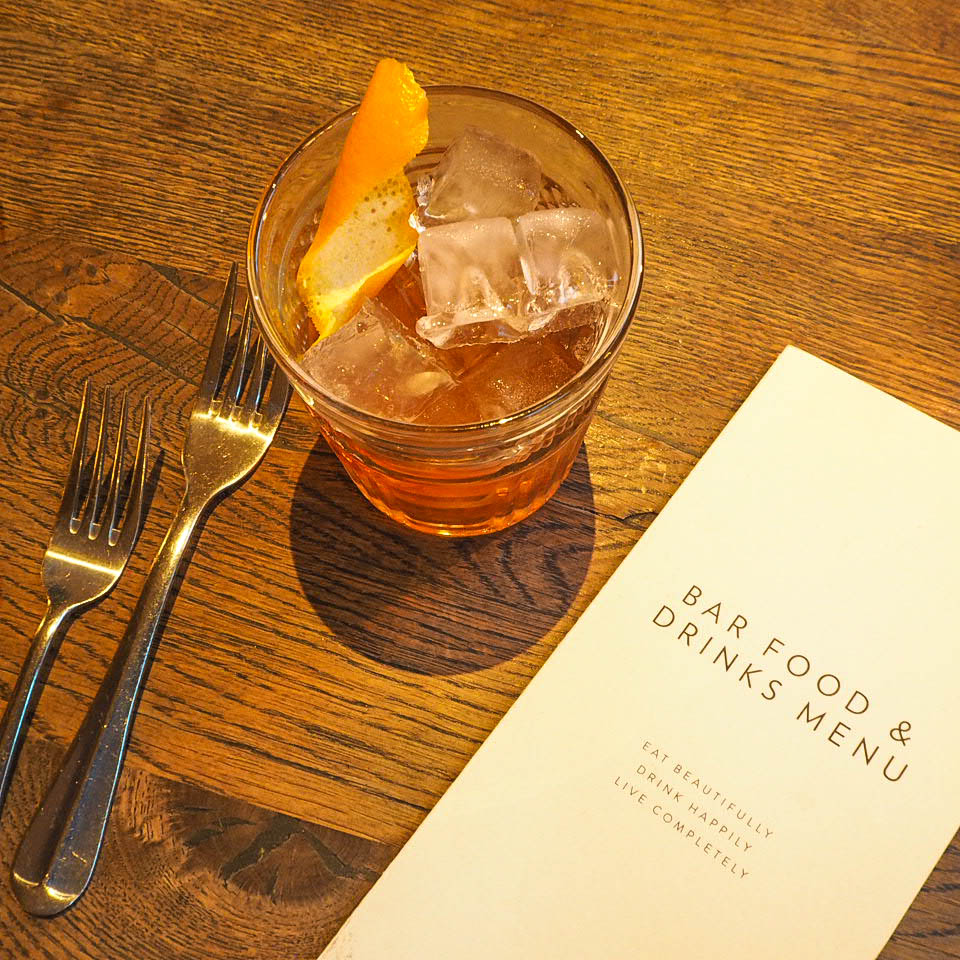 The new autumn menu is a blinder and full of the sorts of home comforts I love. Carbs and pastries and stodge, in the yummiest degree were on offer, and we started with the chorizo scotch egg. Paprika infused mayonnaise brought out the Spanish flavours and the spice was upped with rocket on the side. Most importantly, the yolk was soft but not entirely runny, so I could sop up the fallen breadcrumbs with glee.

For mains, B went for the roast cod with brown shrimp and gremolata mash. I’ll admit, I had to Google ‘gremolata’ but it turns out that it’s made up of parsley, lemon and garlic – the latter two being classic flavours with fish, and so accompanied it perfectly. B was extremely content as the dish was swathed in butter, which we mopped up quite happily. 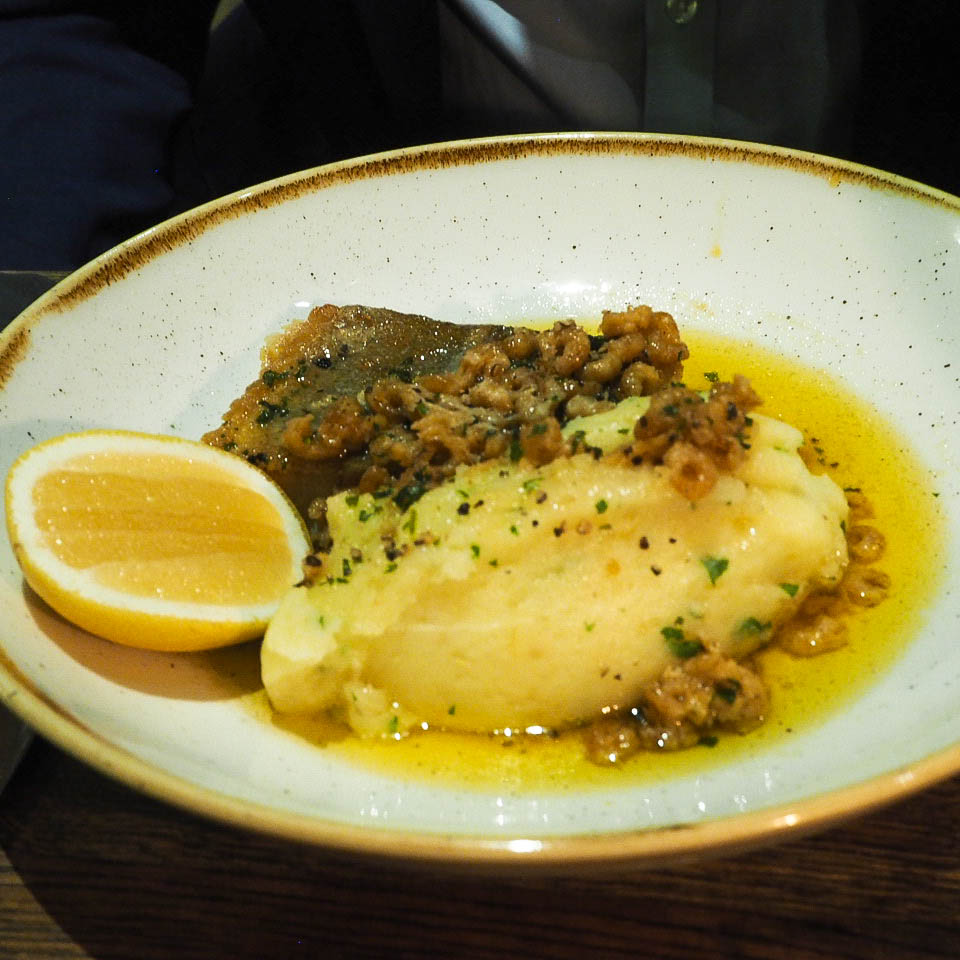 My main of venison pie was a pleasant surprise. Most pub pies come served in a ceramic pot and topped with a puff pastry lid, which I always find massively disappointing. This, however, was the real deal, the pastry crispy on the outside and encasing a not-too-shabby amount of venison chunks. The gravy was a little watery for me, but the filling was more than substantial to make up for it. 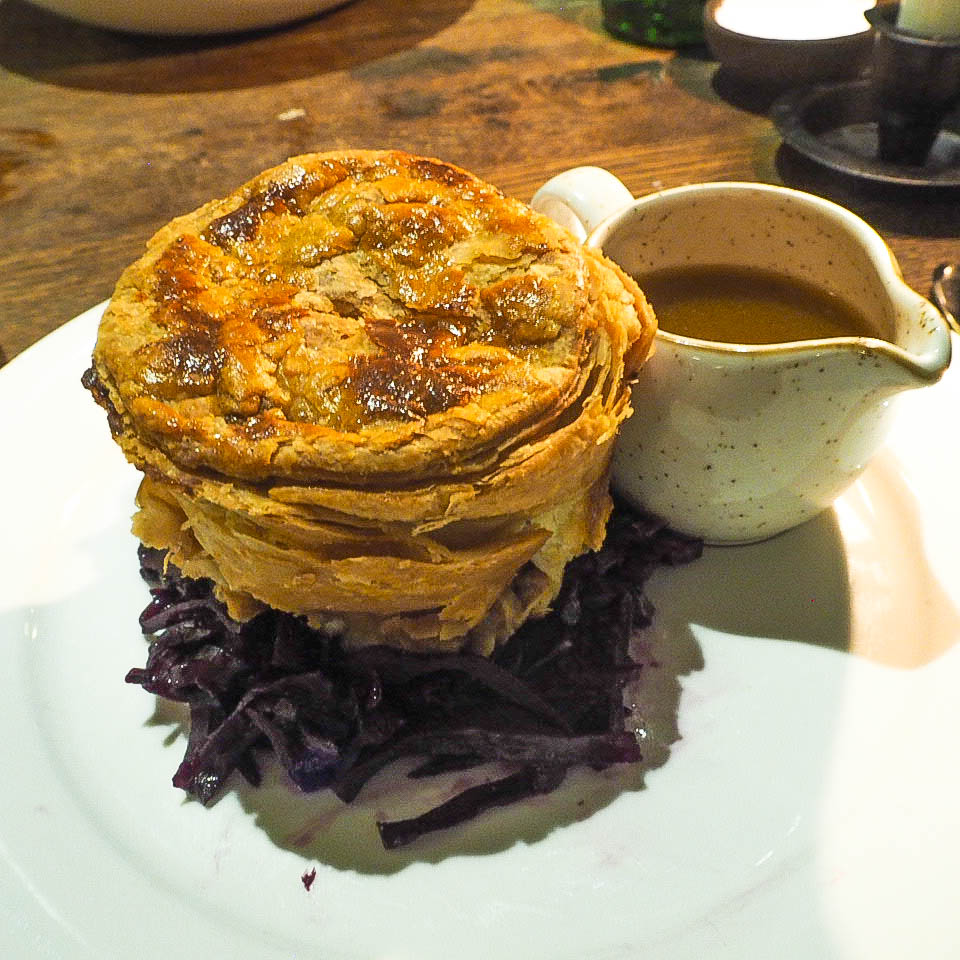 Nearing capacity, we somehow braved pudding. B went for the signature chocolate orange jaffa cake which put GBBO attempts to shame. I don’t like orange flavoured desserts, but the small amount I tried revealed a soft sponge, dark, sugary chocolate and a healthy dose of pleasant orange – not a cheap artificial flavouring. 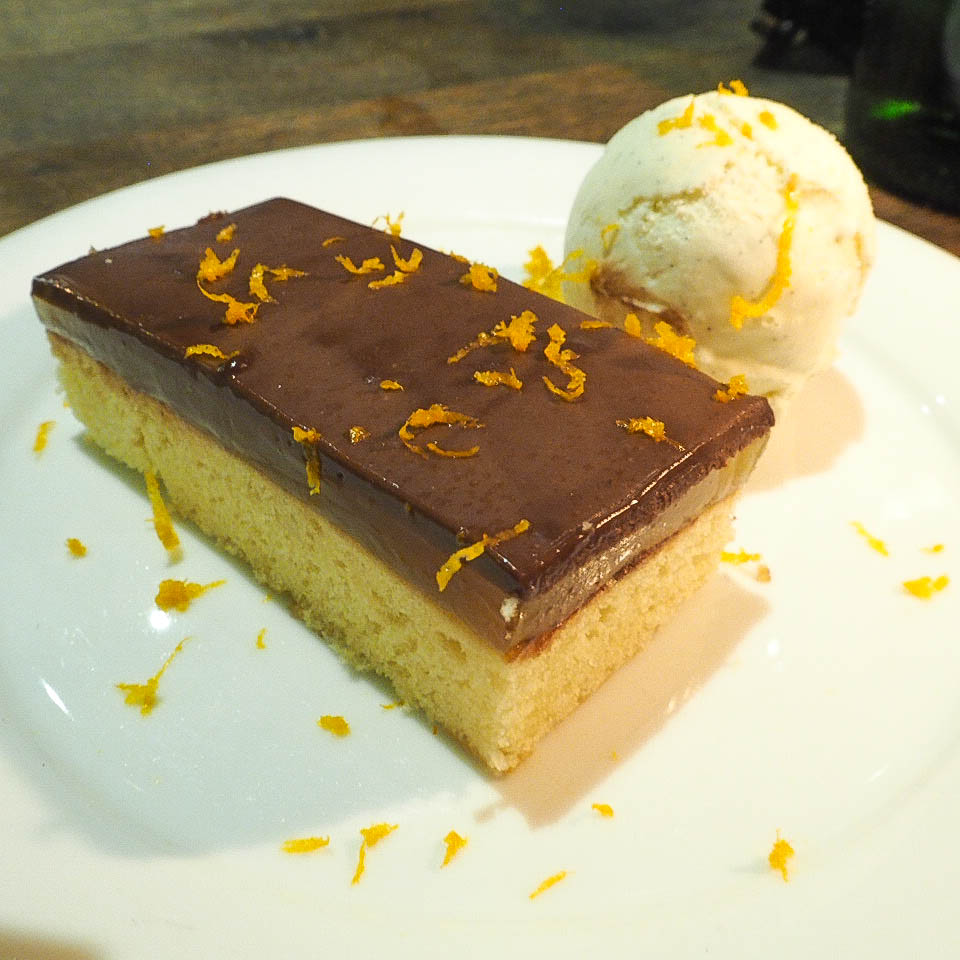 I went full pelt into the pecan pie. That’s right, I double pie’d and didn’t regret a thing. It wasn’t dry at all, which is always a fear with this particular dessert and sweet, sweet brown sugar glided through the whole thing. It did one of my favourite desserts proud. 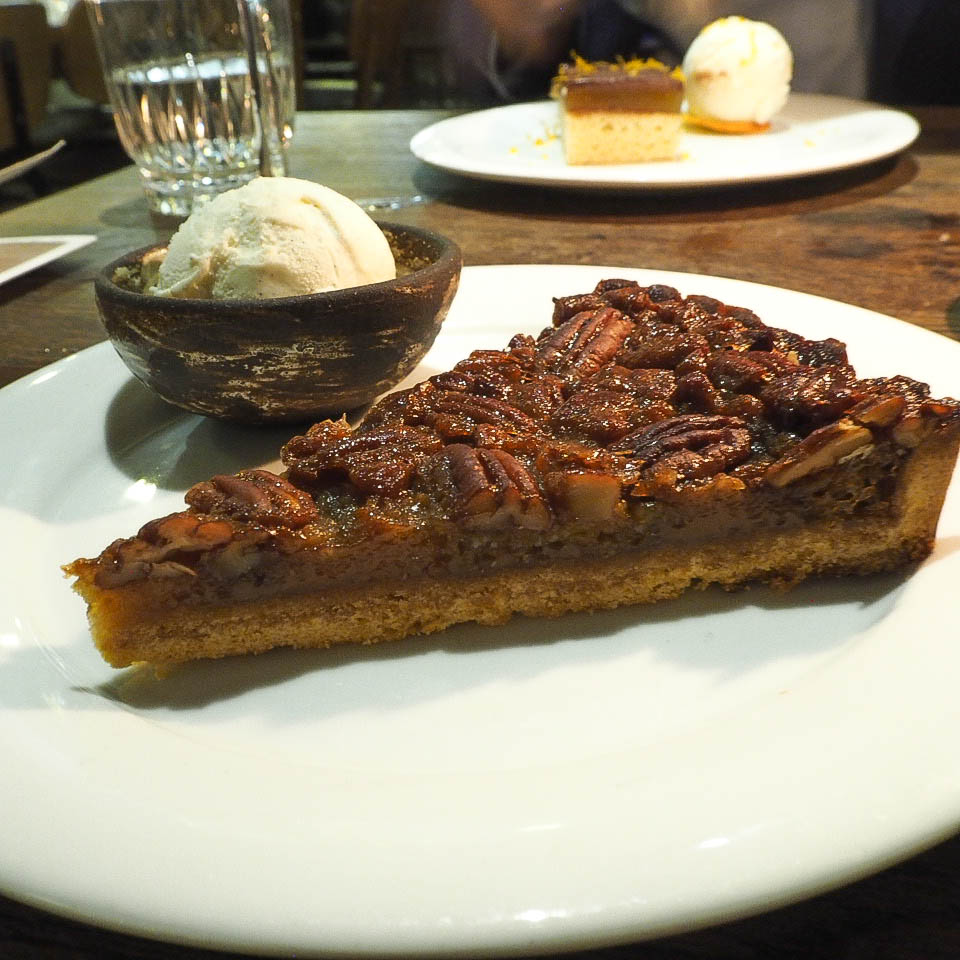 The Happenstance is unassuming on the outside and a pleasant surprise on the inside. A calm and attentive staff made us feel incredibly welcome and the food put us into a gentle carb daze for the rest of the evening.

Our meal at The Happenstance was complimentary but all opinions are truthful and unbiased.