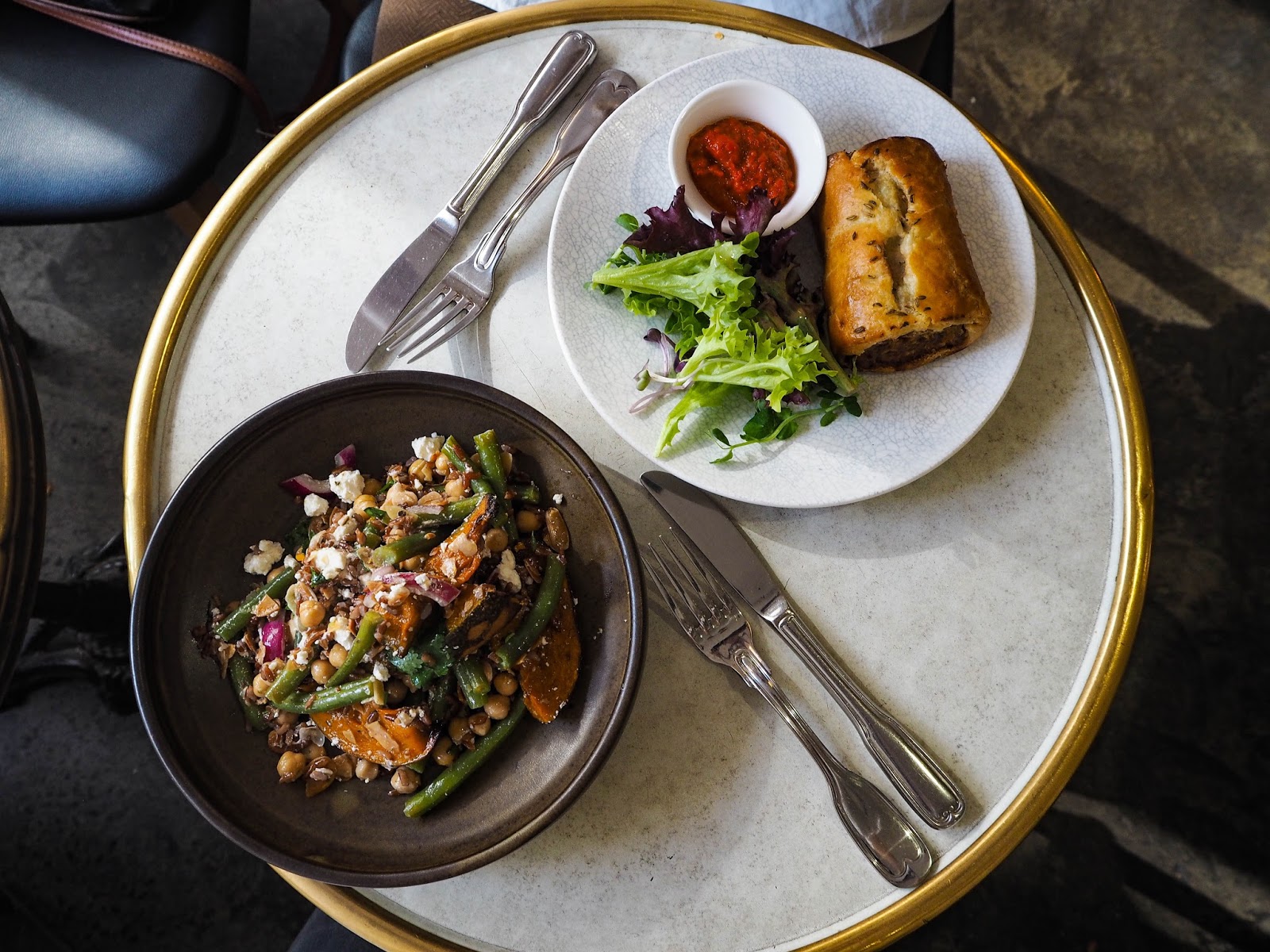 I’d heard on the grapevine before arriving in Tasmania that Hobart is a bit of a unknown foodie gem, but nothing could have prepared me for the unbelievable food I had for almost every meal during my visit. I indulged in brunch, lunch, dinners and desserts that have seared themselves into my memory as some of my favourite meals ever, and if there’s one thing that would make me travel back to Tasmania – it’s the food. A full post on the incredible Salamanca Market is to come, but for now, here’s the other places my stomach fell in love with: 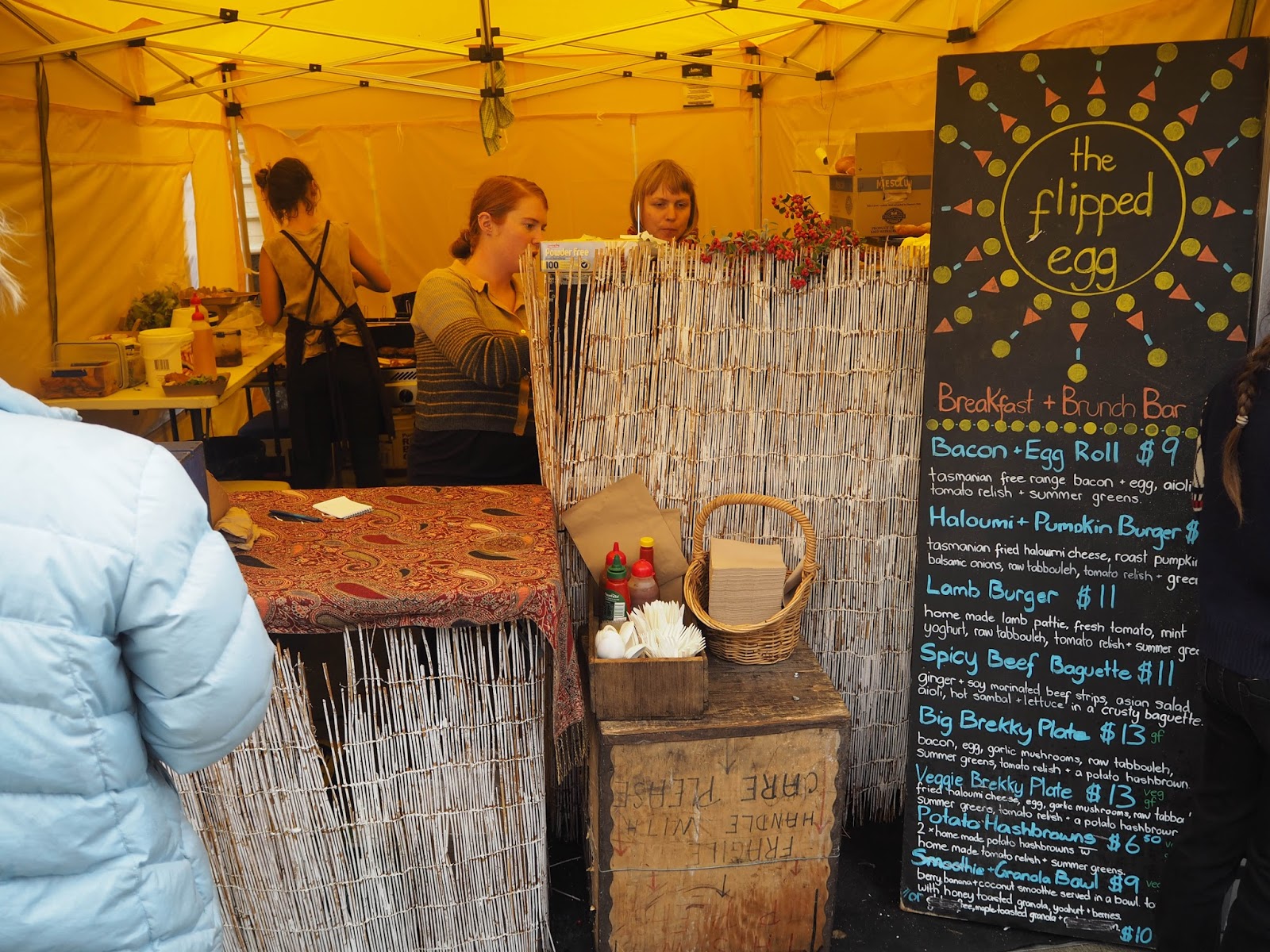 After eating everything in sight at Salamanca Market the day before, we weren’t sure if Farm Gate Market could compare, but it was spectacular. Not only did we buy some beautifully fresh and local produce for our picnic to take to Port Arthur, I also had one of the best breakfasts of my life from The Flipped Egg. It’s rare that I choose a vegetarian breakfast over a meaty one, but I saw fried halloumi and I was in. 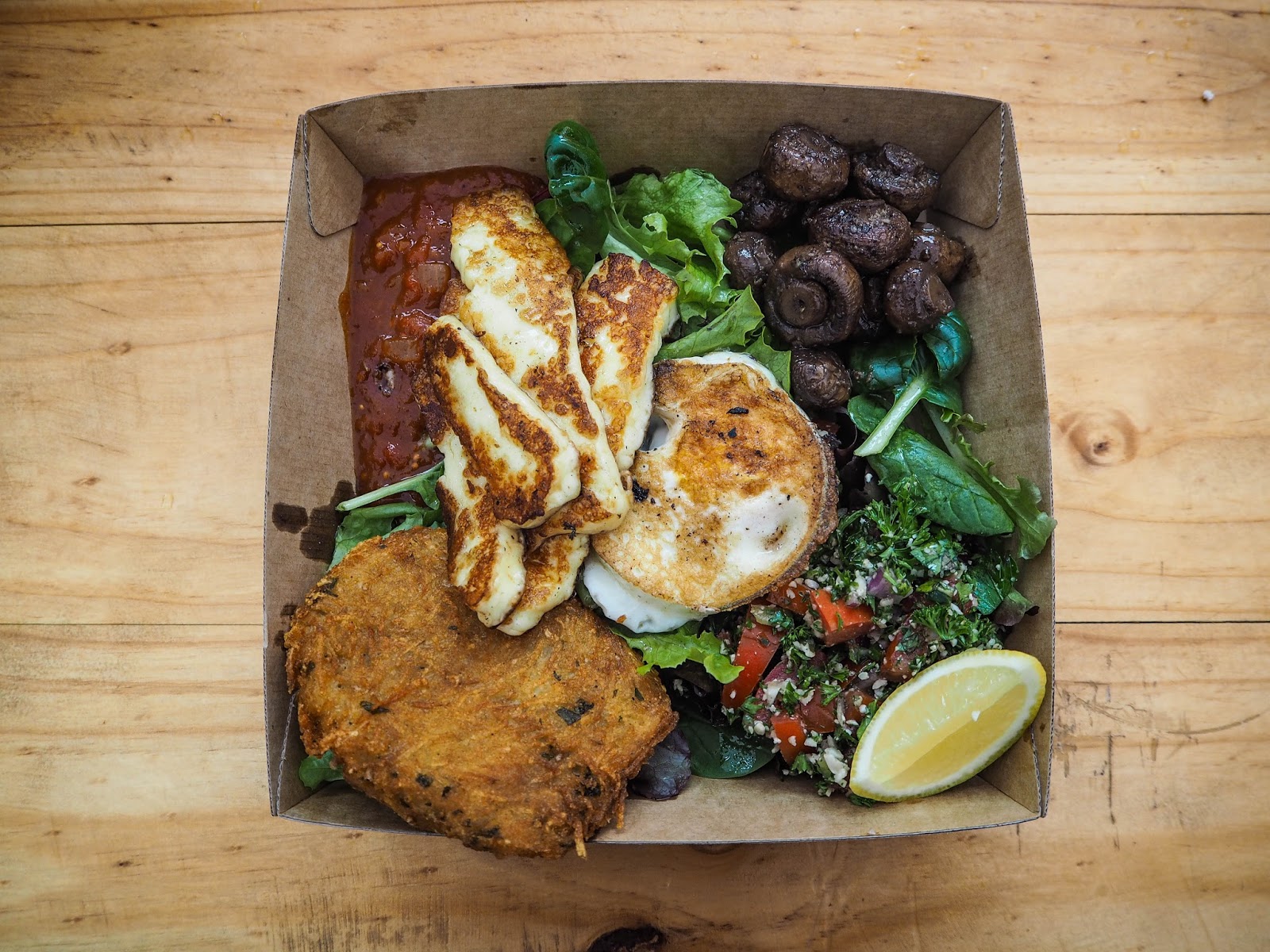 It was honestly the best halloumi I have ever had, and alongside garlic mushrooms, fried egg and a hash brown, it was evened out with fresher flavours from a selection of salad greens, tomato relish and a raw tabbouleh. I was actually in heaven. 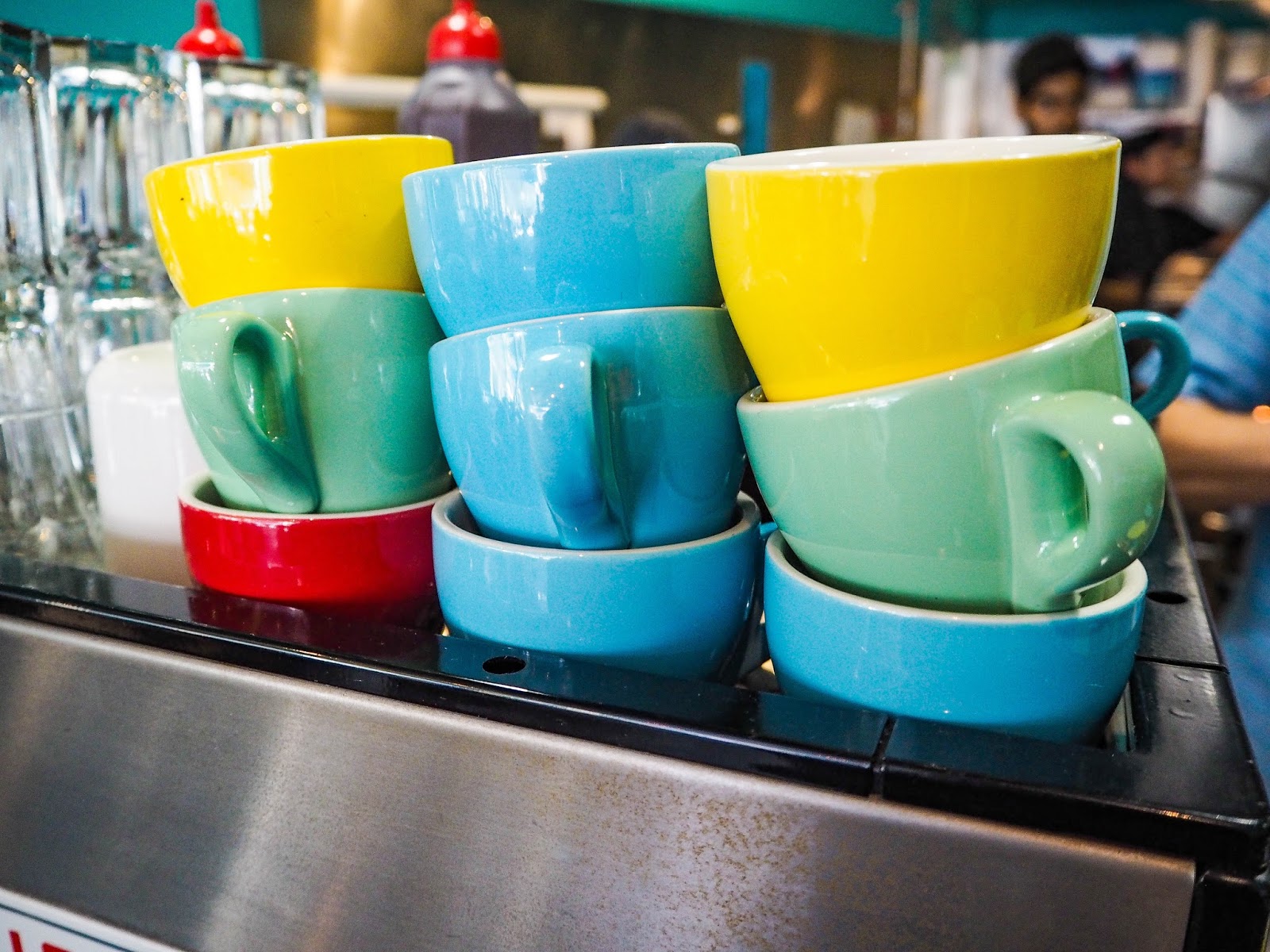 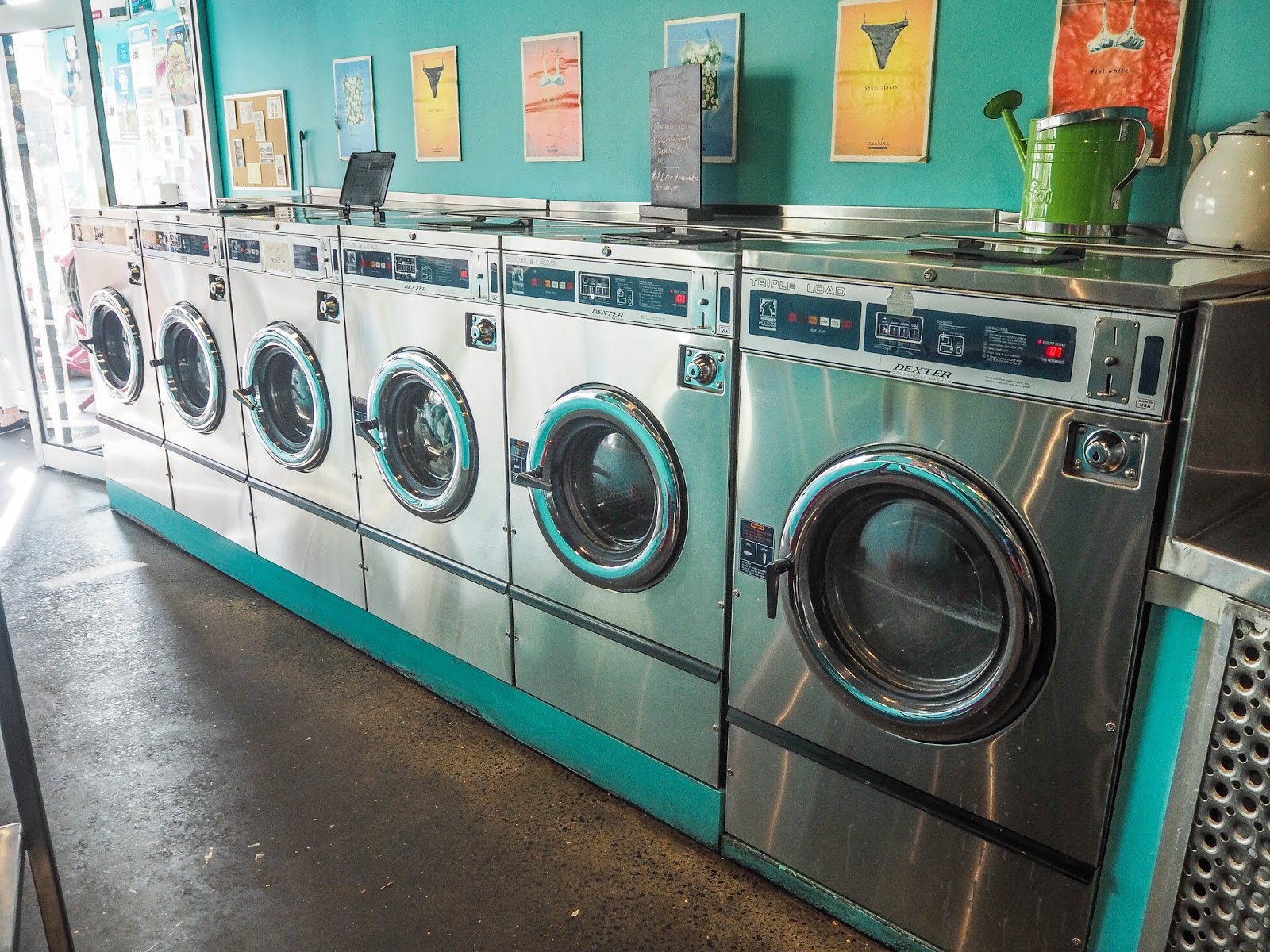 Cafe-cum-laundromat (because that’s a combination that makes sense, obviously) Machine Laundry seemed to be the go-to brunch spot for locals and tourists alike. We had to wait a little while to nab a table, but the menu looked so damn good that we knew we had to try it before leaving Hobart later that morning. Settled in for brunch, I had a maximum hot chocolate, made with unsweetened Dutch cocoa and served in a BOWL, rather than a cup. 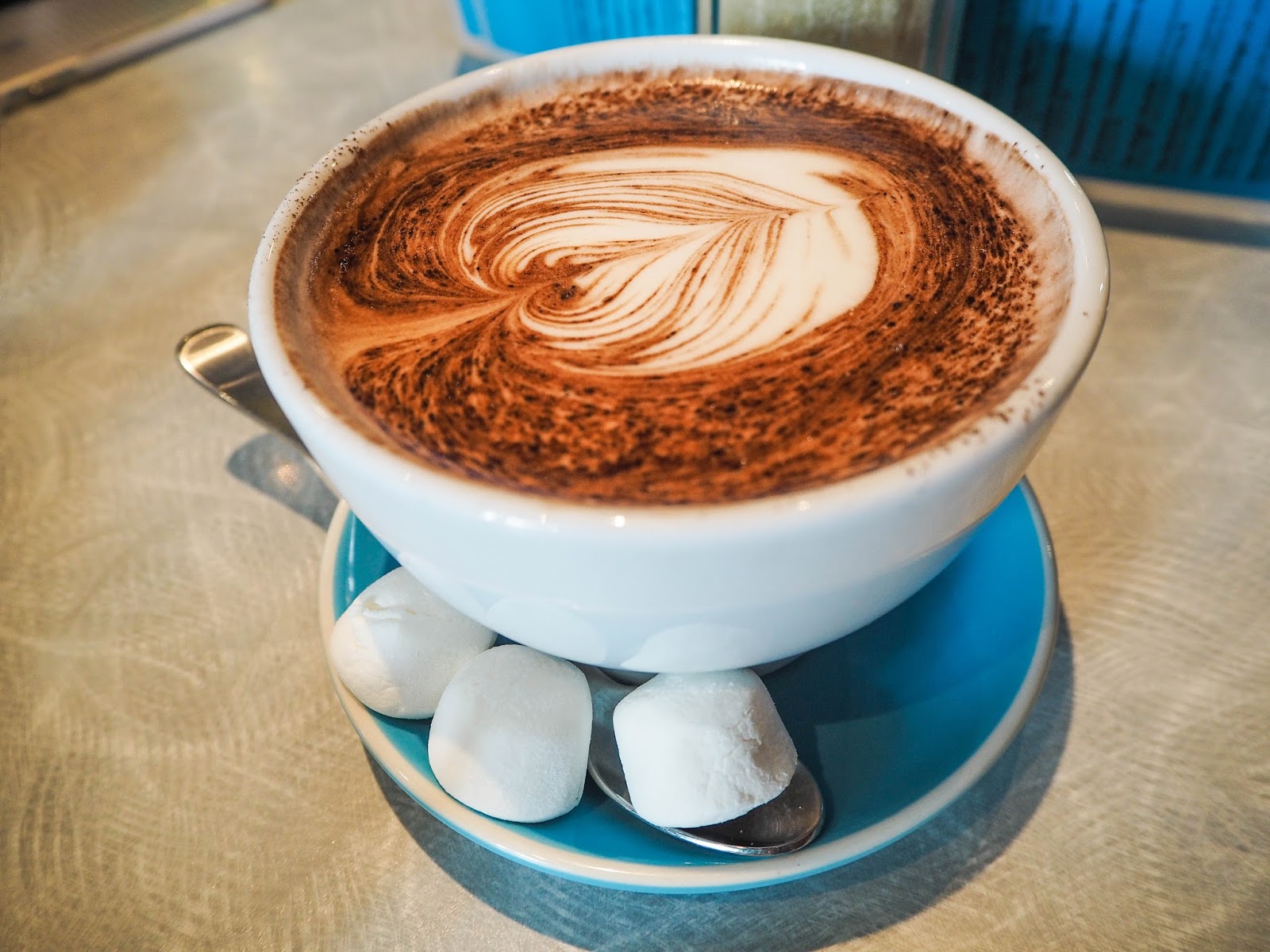 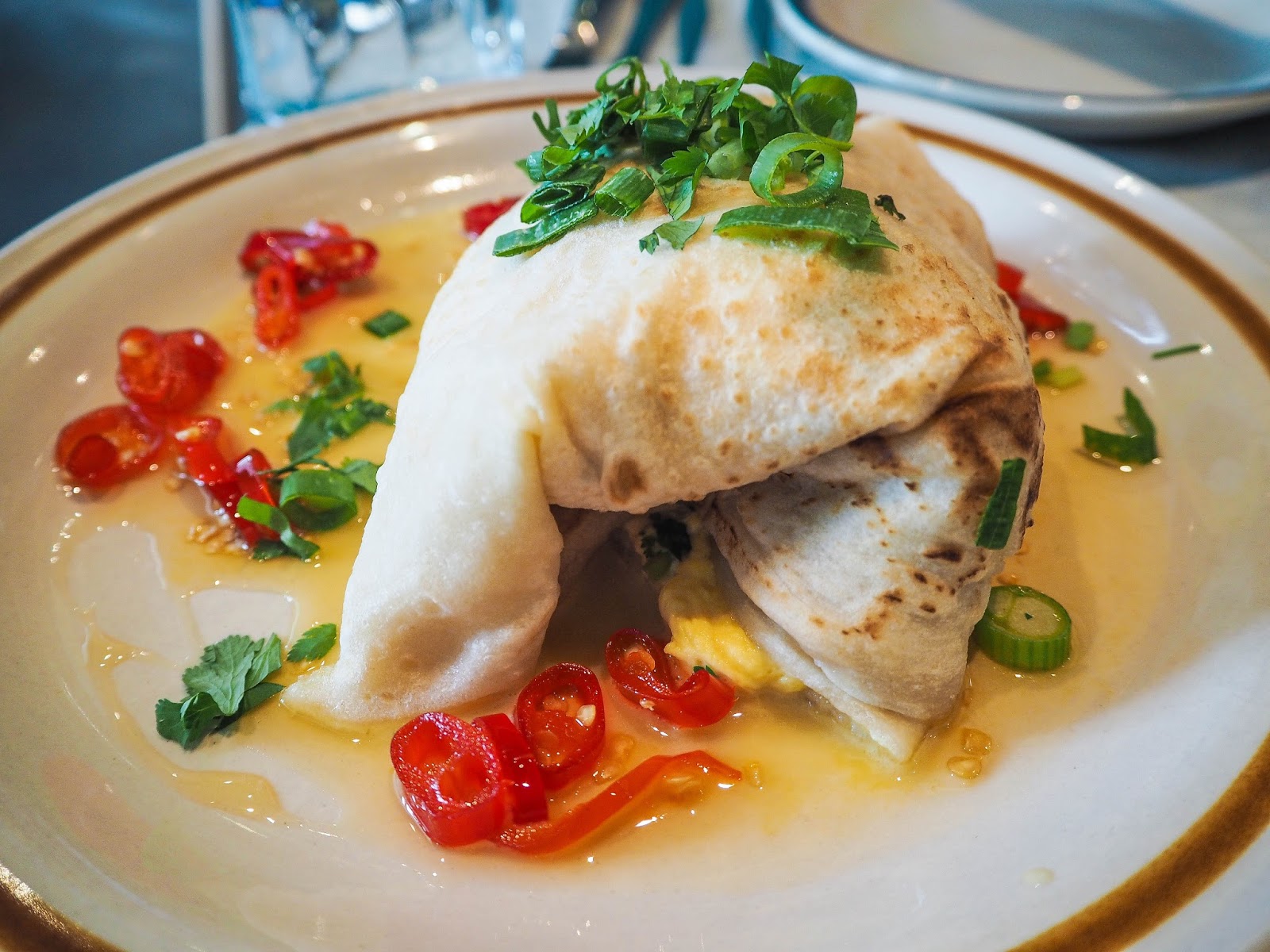 Bog-standard eggs for brunch were whacked up a billion percent by the Machine Packed Roti Bread. A beast of a dish, it wrapped soft roti around a mound of buttery scrambled eggs, dashed with fresh chillies. Sod putting eggs on toast, I demand it served in roti from now on! 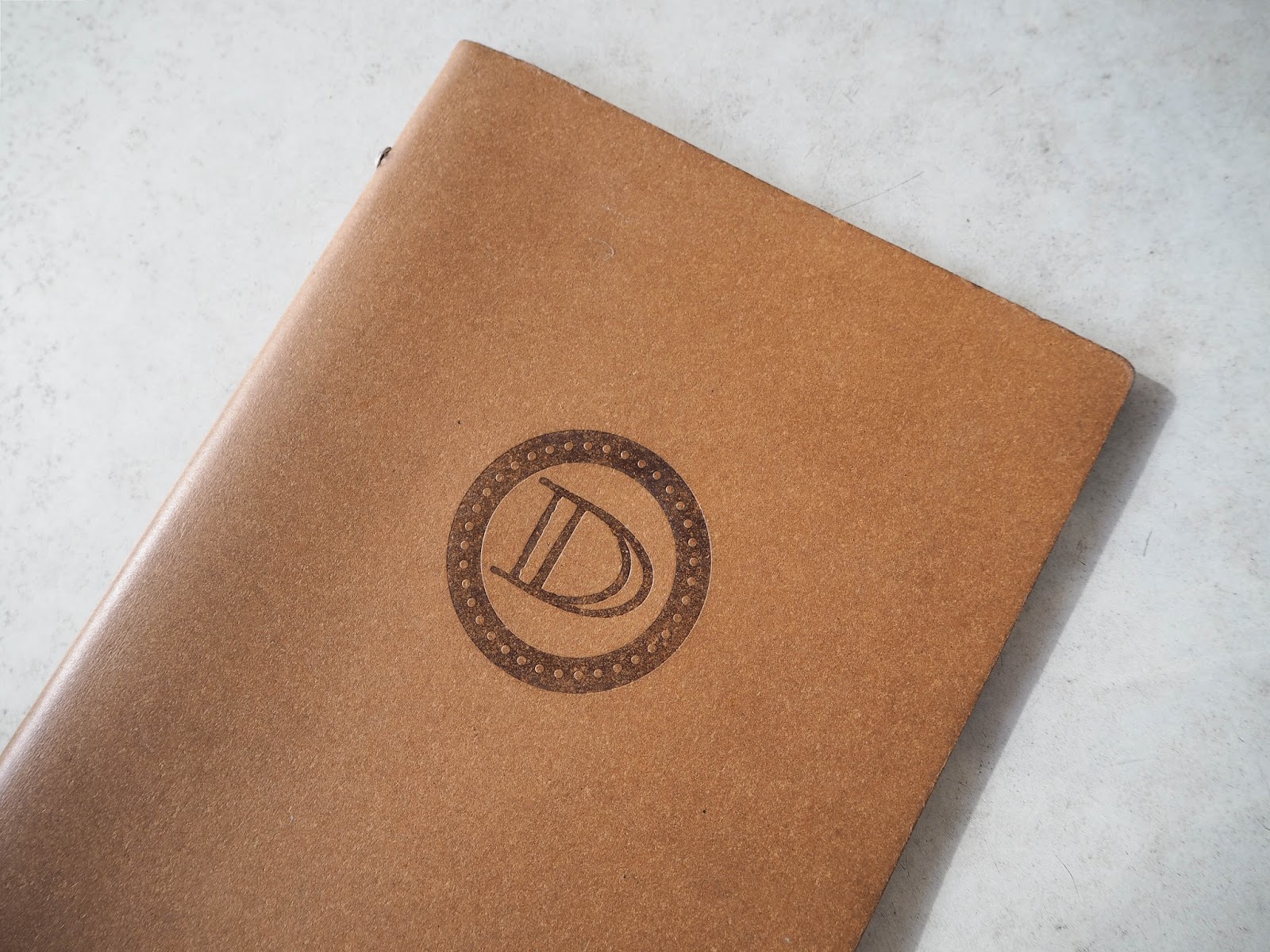 After finishing our meal at Daci & Daci, the first place we’d eaten at in Tasmania, we knew Hobart was going to be something special. It’s a quaint cafe with a 1900s feel thanks to dark wood table and chairs as well as glass cases of delicate patisserie. It was lunch time so something savoury was called for; the Moroccan lamb sausage roll was generous with its filling and had a peppery, flaky pastry. 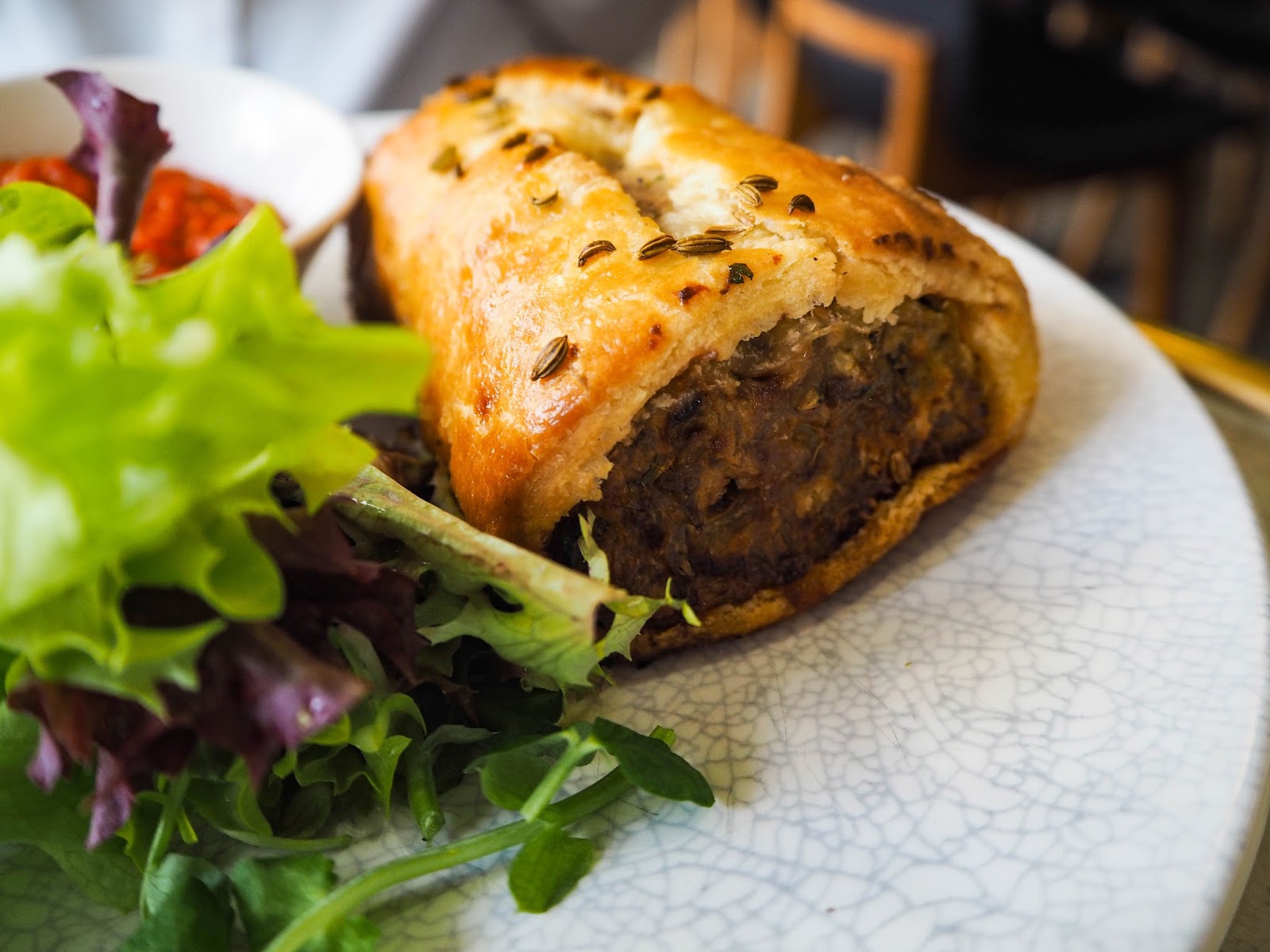 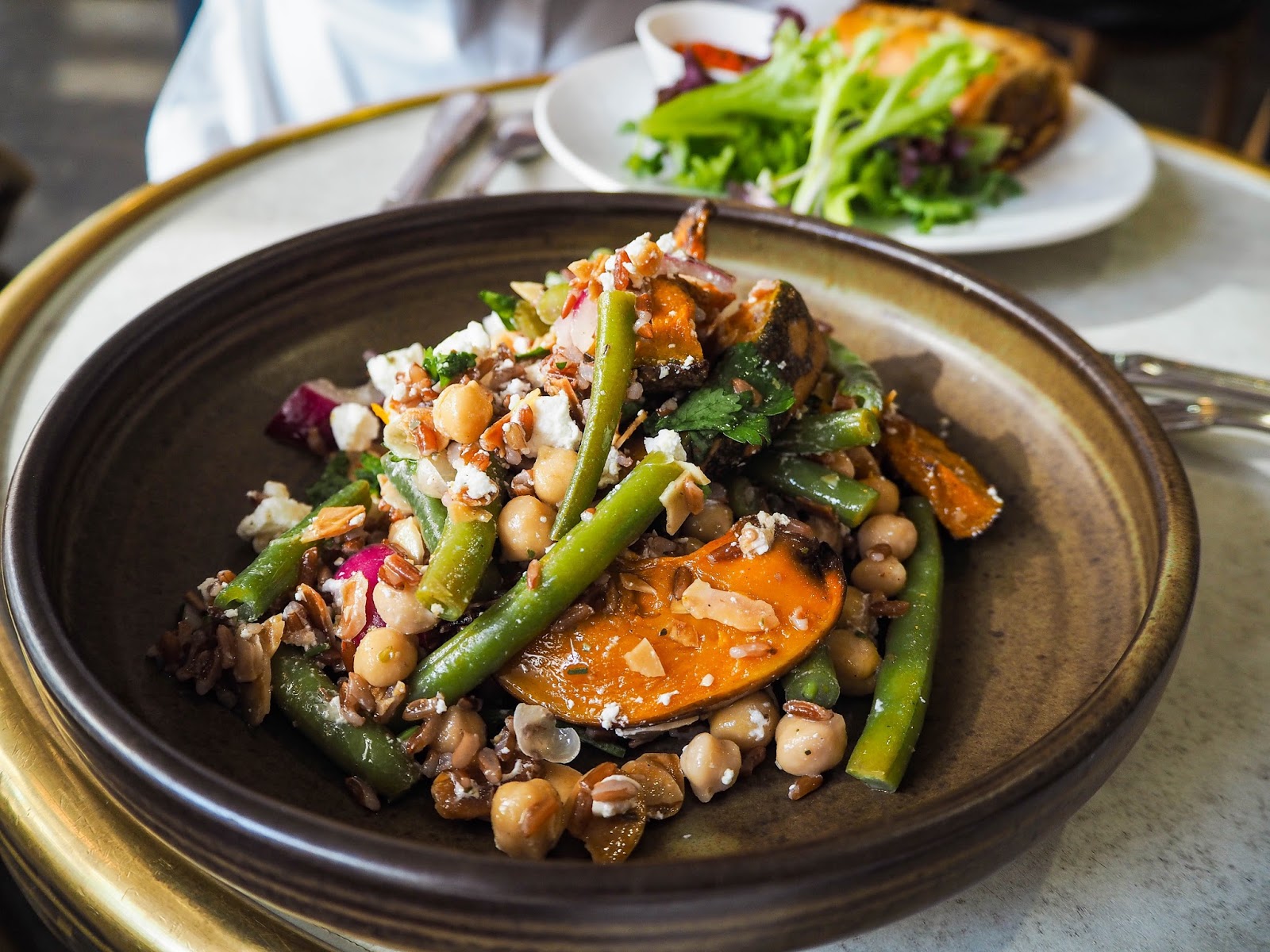 Alongside that was the sort of salad that, if I made it at home, I might actually get my five-a-day more often: green bean, roasted pumpkin, red rice, toasted almonds, radish and chickpeas, tossed in a tart red wine vinaigrette. I could’ve eaten it forever. 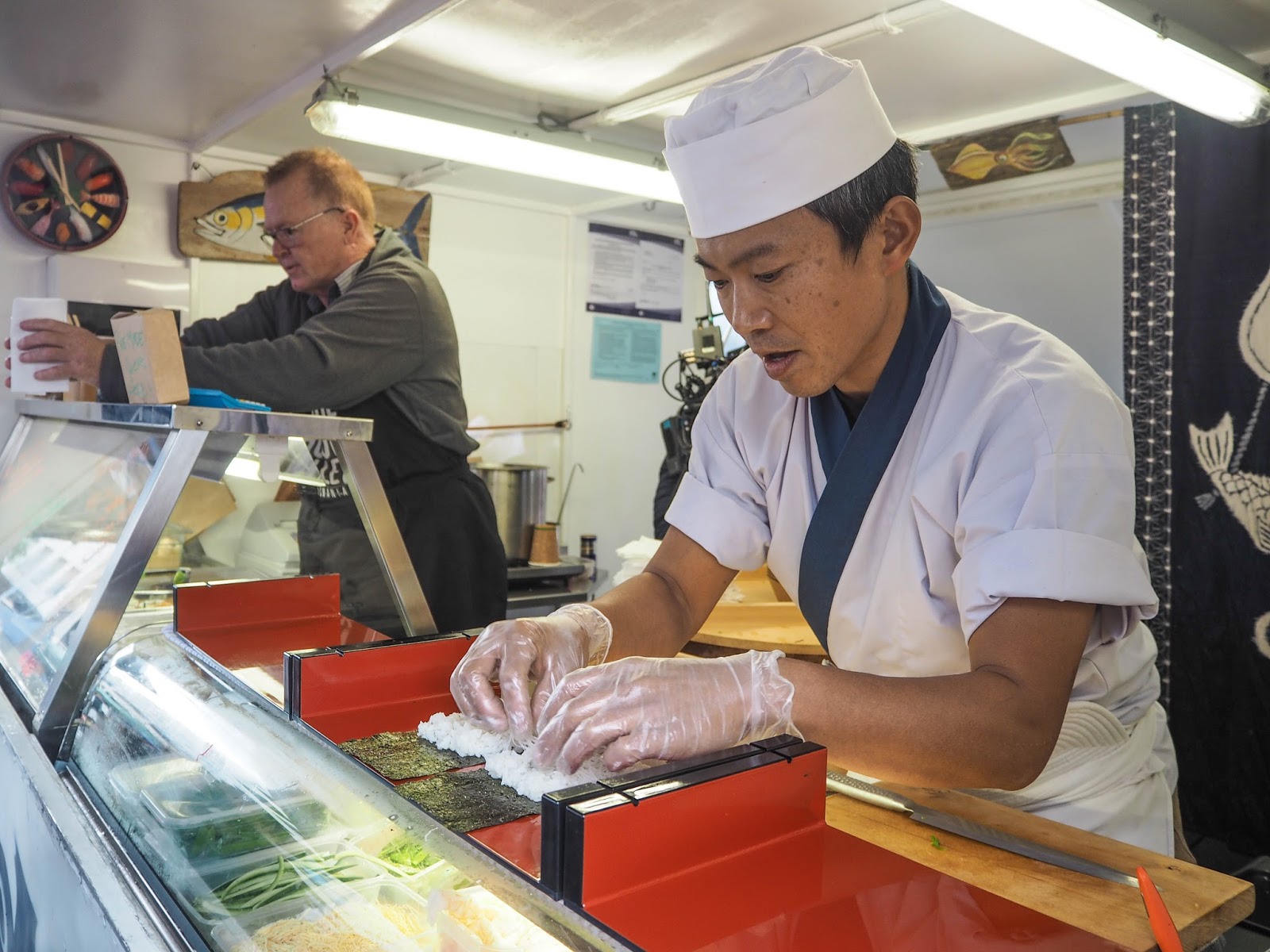 Masaaki Koyama is touted as Australia’s best sushi chef, which is hard to believe when you see him serving up food from a food truck in Farm Gate Market, but SO easy to believe when you taste what he makes. His restaurant is open two days a week in Geeveston, but we got the heads up to queue as early as possible for his Sunday stall so we didn’t have to wait all day, and sure enough by the time we’d collected our order, people were literally waiting around the block. 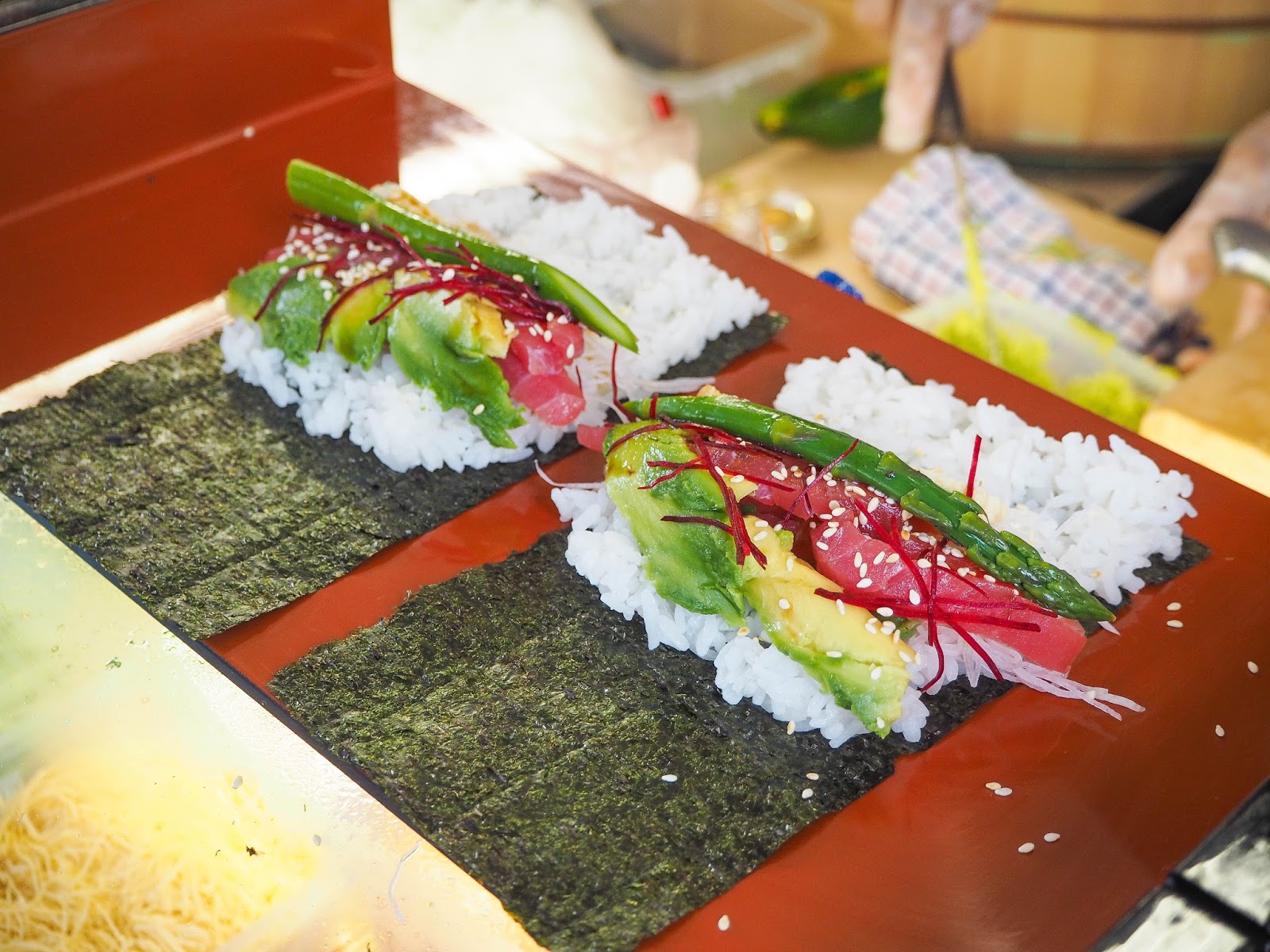 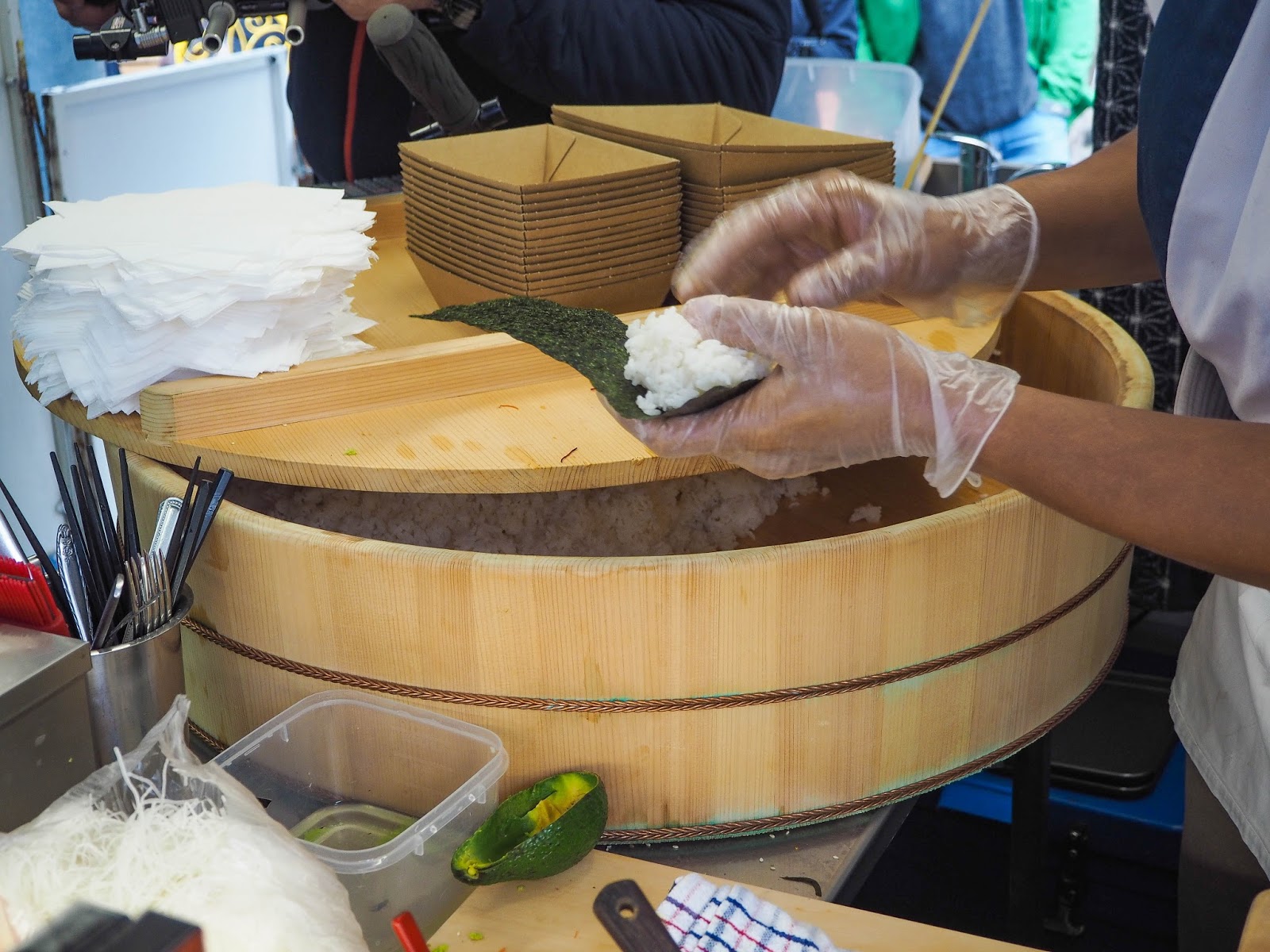 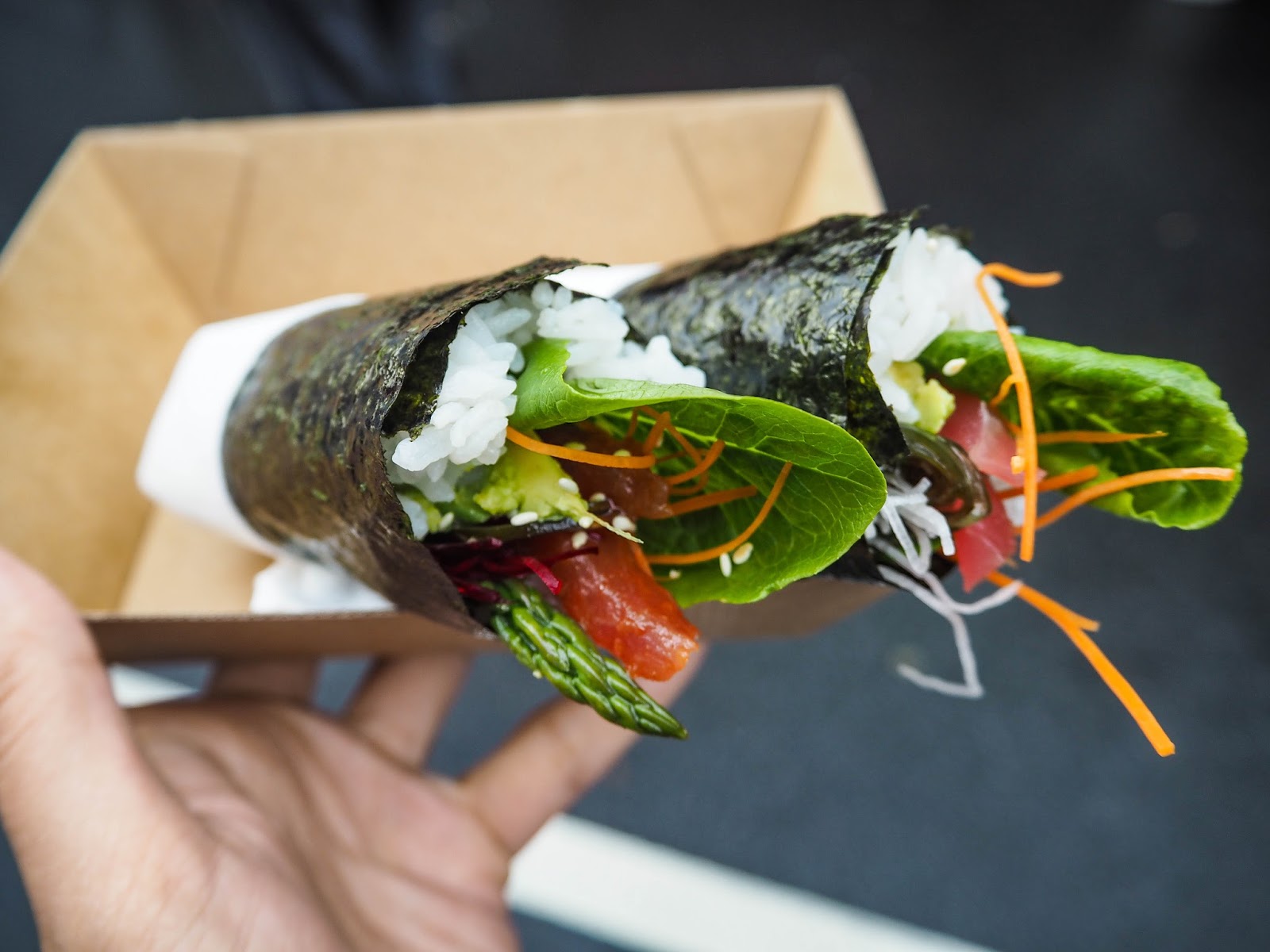 I tried a tuna roll wrapped in thin seaweed with sticky rice, shredded carrot, radish and avocado, topped with sesame seeds. I went for the spicy tuna option which had a real kick, and I also included wasabi to my order so I had that wonderful gradual build of heat that wasn’t overpowering due to the fresh flavours evening everything out. Did you know that Tasmania is the only place aside from Japan that grows wild wasabi? It’s pure flavours like that which mean it is absolutely the best sushi I’ve ever had and I can’t wait to compare it to the stuff I eat in Japan later this year! 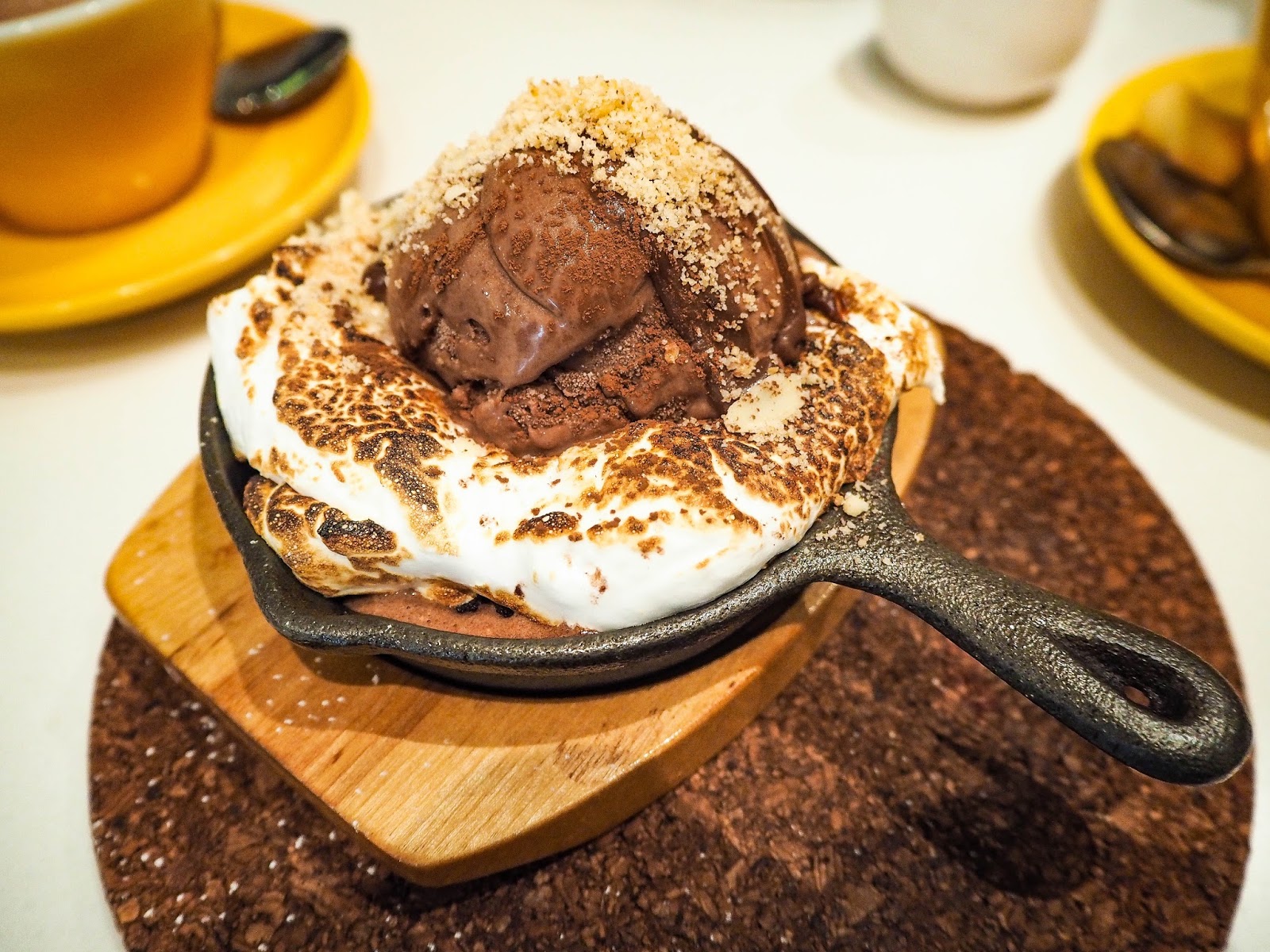 When it’s 9pm and you’ve just woken up from a food coma induced by goodness knows how many savoury delights from a day of eating in Hobart, what do you crave? SUGAR. We’d clocked the Honey Badger Dessert Cafe earlier in the day but were too full to contemplate trying it out, but going back for an evening snack was right on the money.

I had the incredible Black Panookie, a pan based chocolate chip cookie topped with marshmallow, chocolate ice cream, warm chocolate sauce, cookie crumbs and toasted almonds. Yep. Allllllllll of that. The cookie is honestly the best cookie I’ve ever had; it was warm and gooey, soft and freshly baked, and the blowtorched marshmallow on top was melting and seeping into it. I wanted to eat two of them, but probably wouldn’t have made it back to the hotel in one piece. 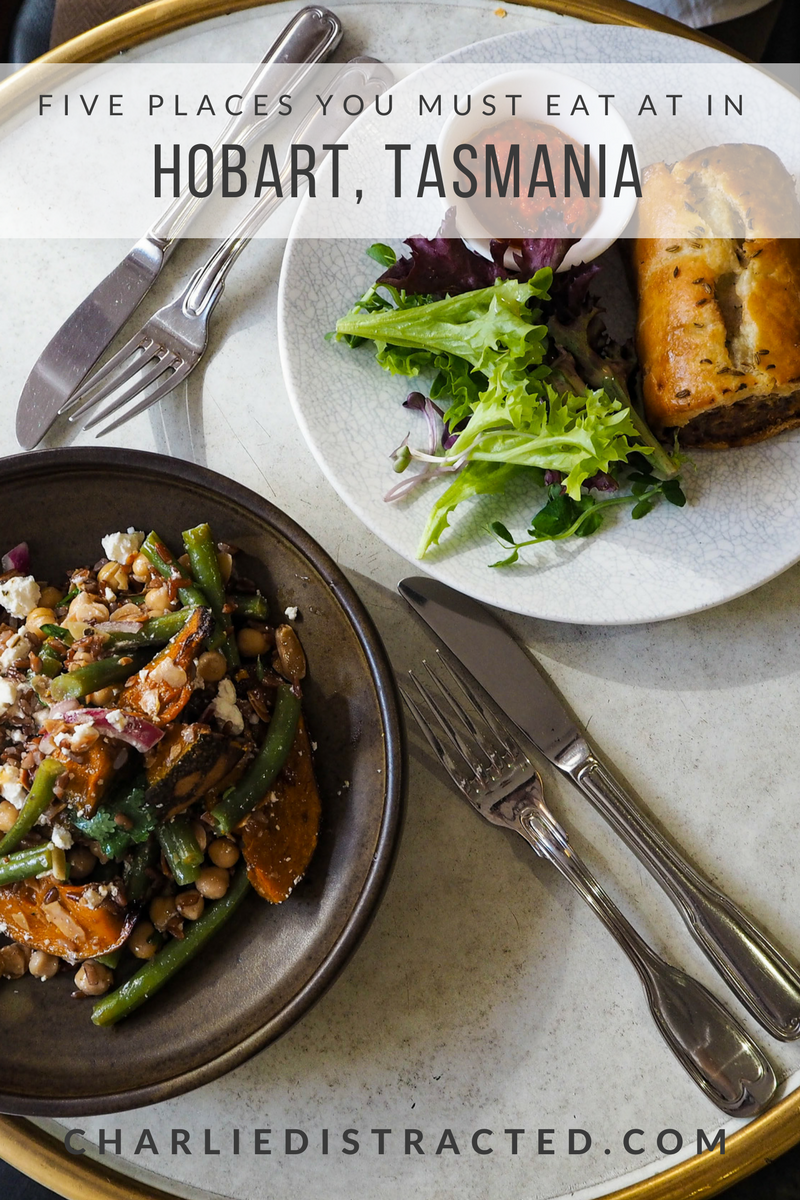