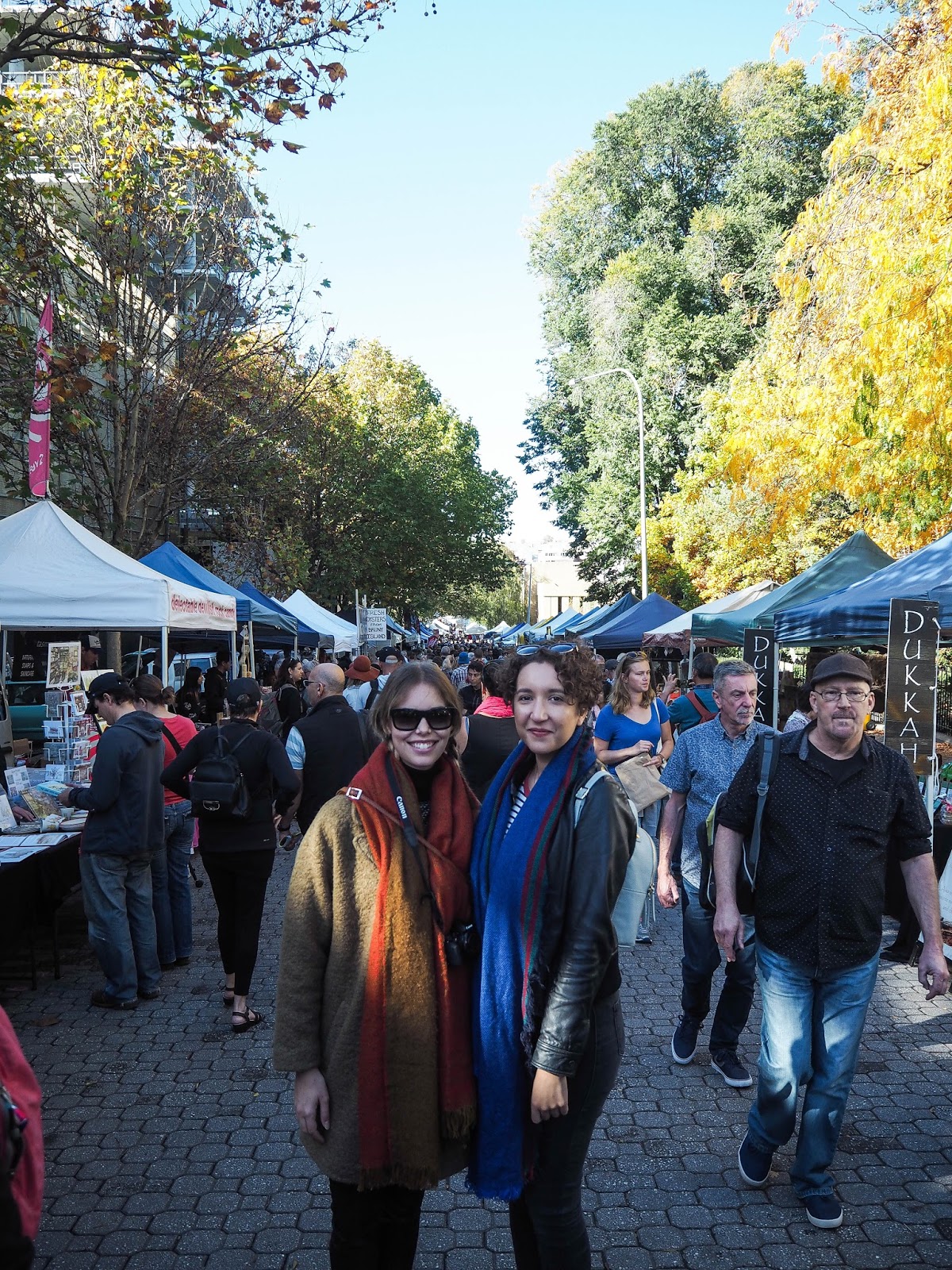 The incredible Salamanca Market in Tasmania is, without question, the best food experience I have ever had. To open a post with that line is one hell of a statement, but the variety of foods on offer meant we literally spent an entire day walking from one end of the market to the other with the aim of trying as many things as possible. 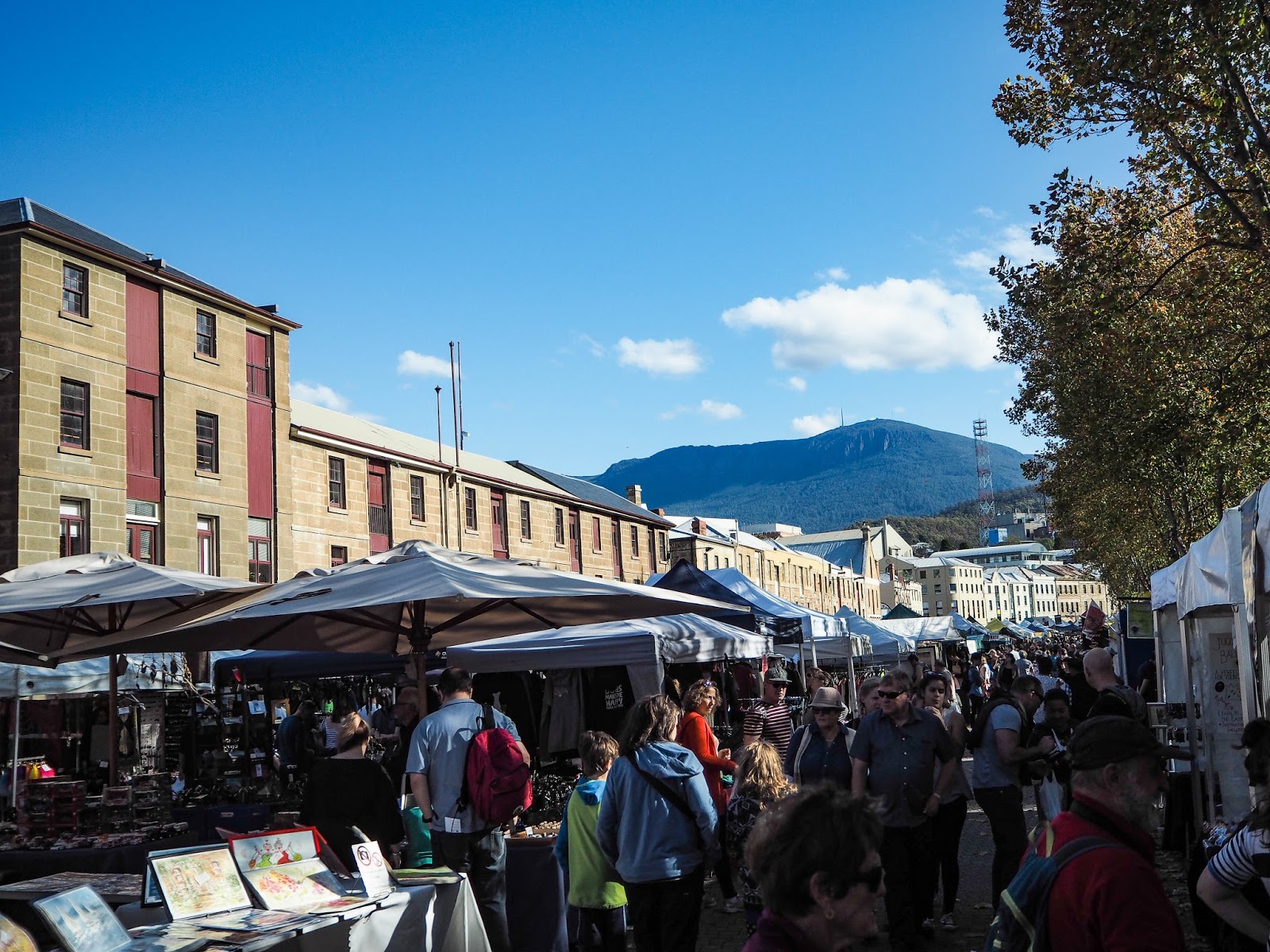 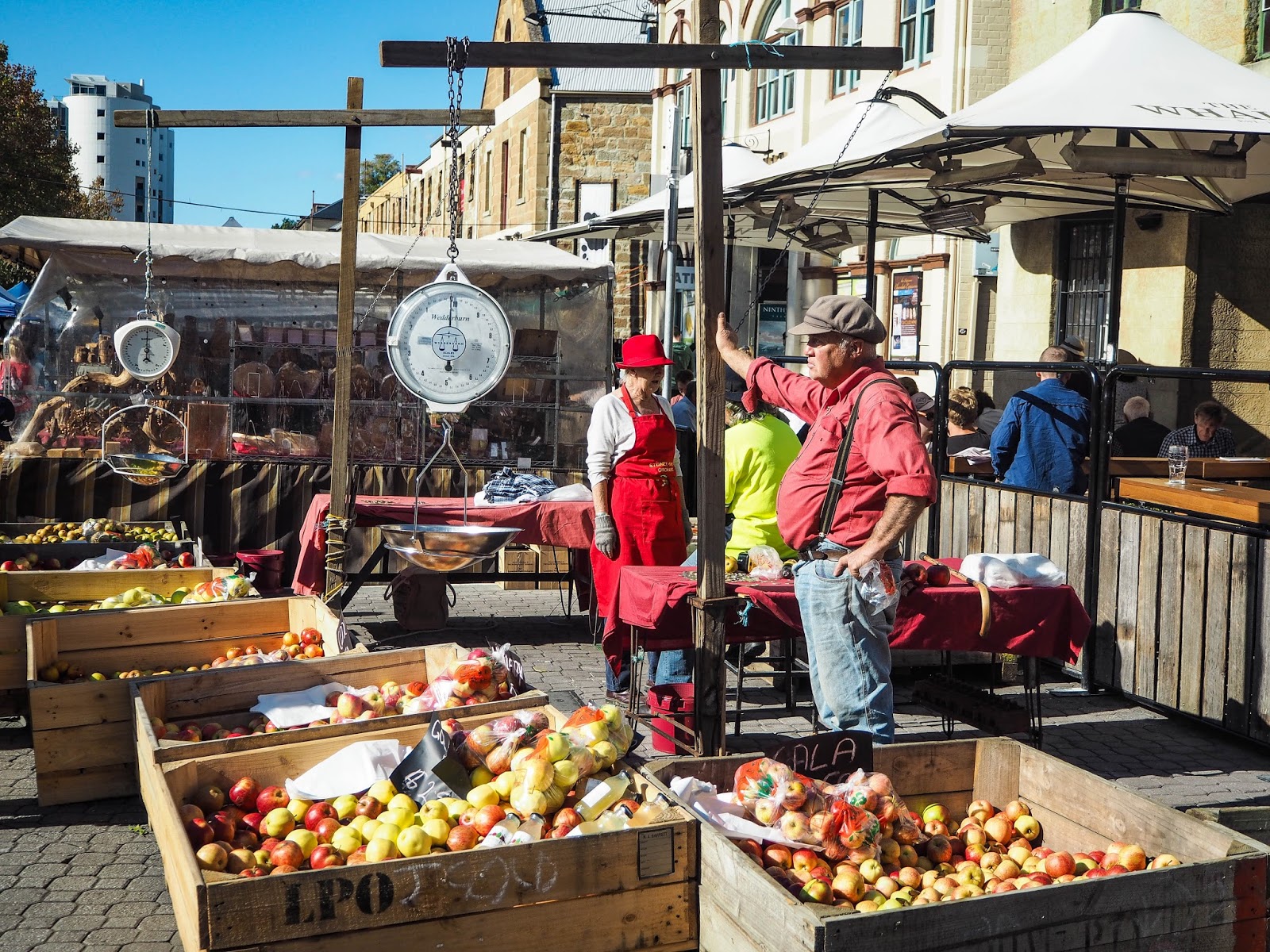 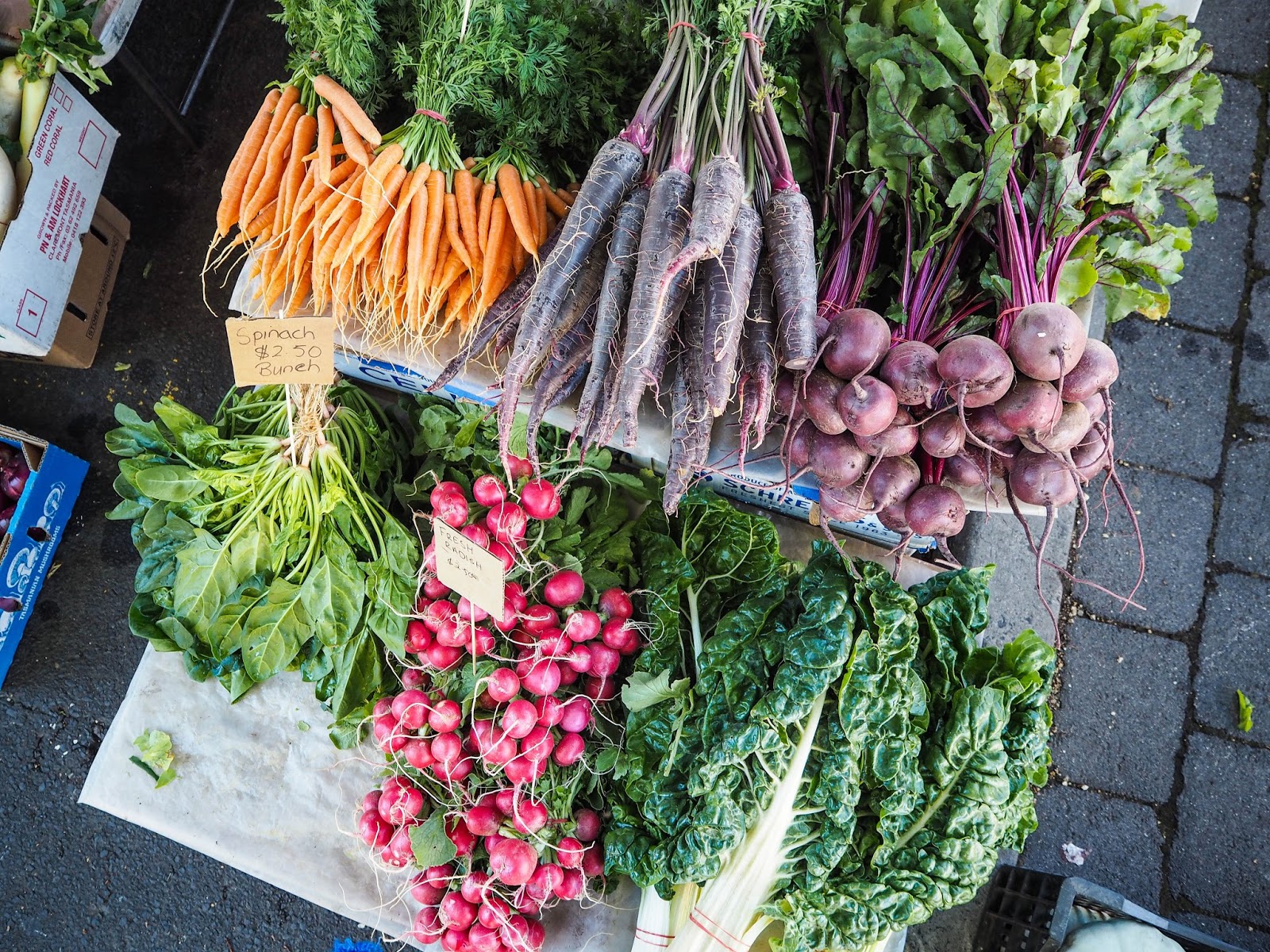 At first glimpse, we spotted how a few stalls were proudly proclaiming their Tasmanian ingredients. So we made a pact: every time we saw a vendor selling something ‘local’, we would try it. Aaaaaaaand that, dear readers, was our downfall, because it turns out EVERYTHING in Salamanca Market is fresh, homemade and very, very Tasmanian. But we persevered. Here’s what we loved the most: 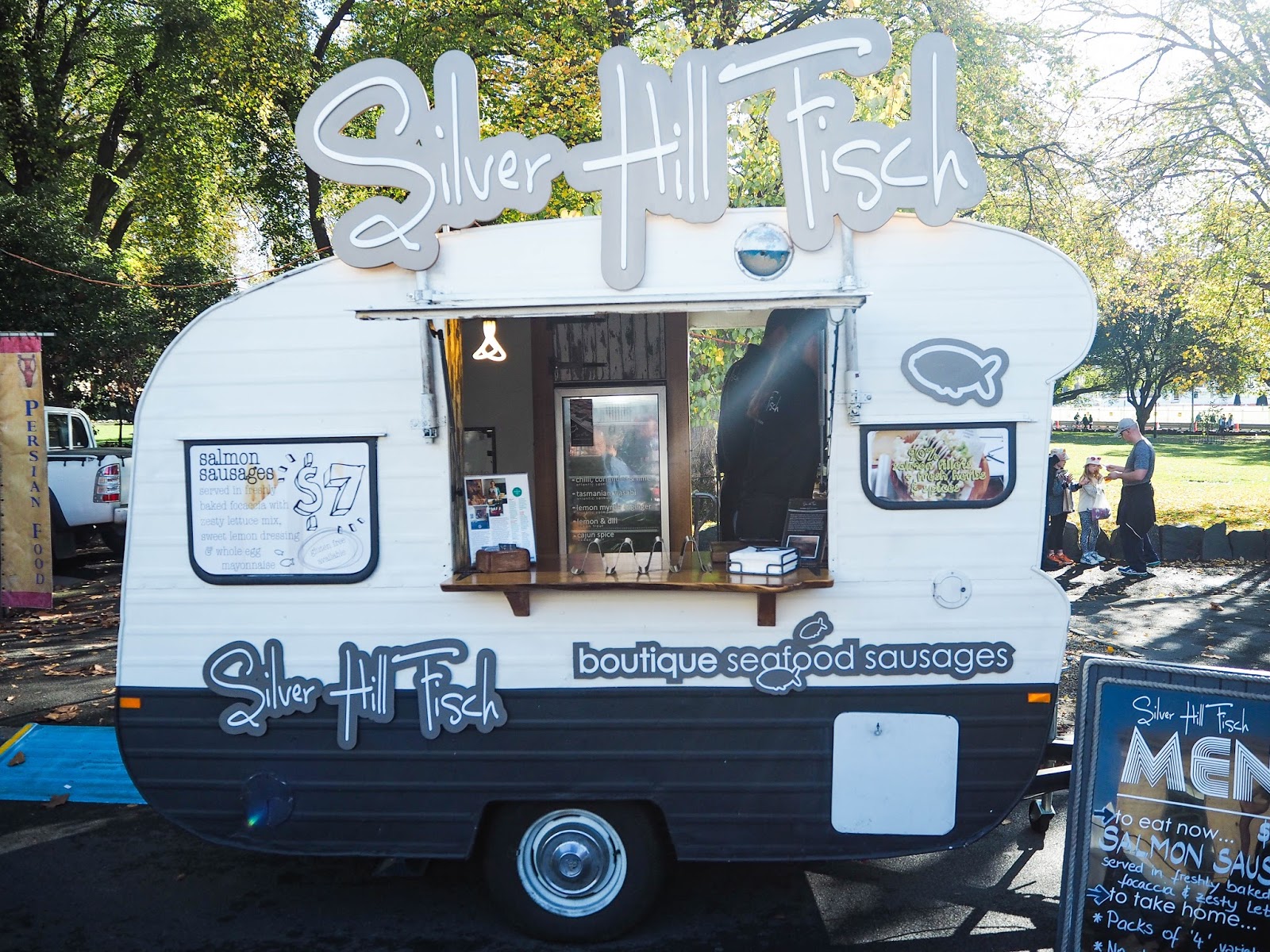 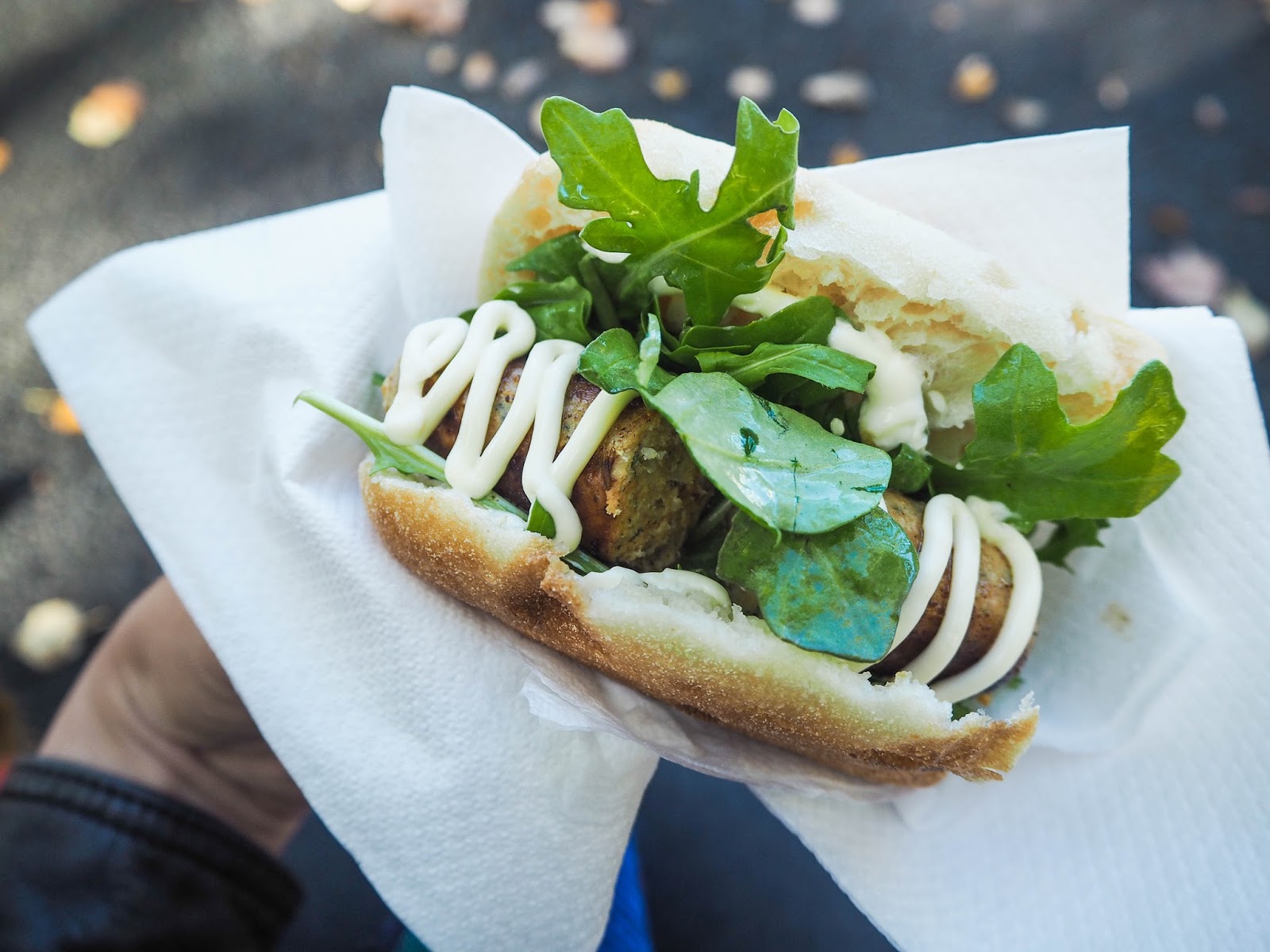 Away from the main thoroughfare and surrounded by tables packed full of tourists stuffing their faces, we spotted a little caravan belonging to Silver Hill Fisch, serving up a fishy take on the regular hotdog. I’m not a huge fan of salmon (unless it’s smoked and served in a bagel because I’m basic like that), but this had added freshness from dill, a creamy texture from whole egg mayo, and a spicy aftertaste thanks to the rocket – all served up in a fluffy-on-the-inside, crispy-on-the-outside focaccia. 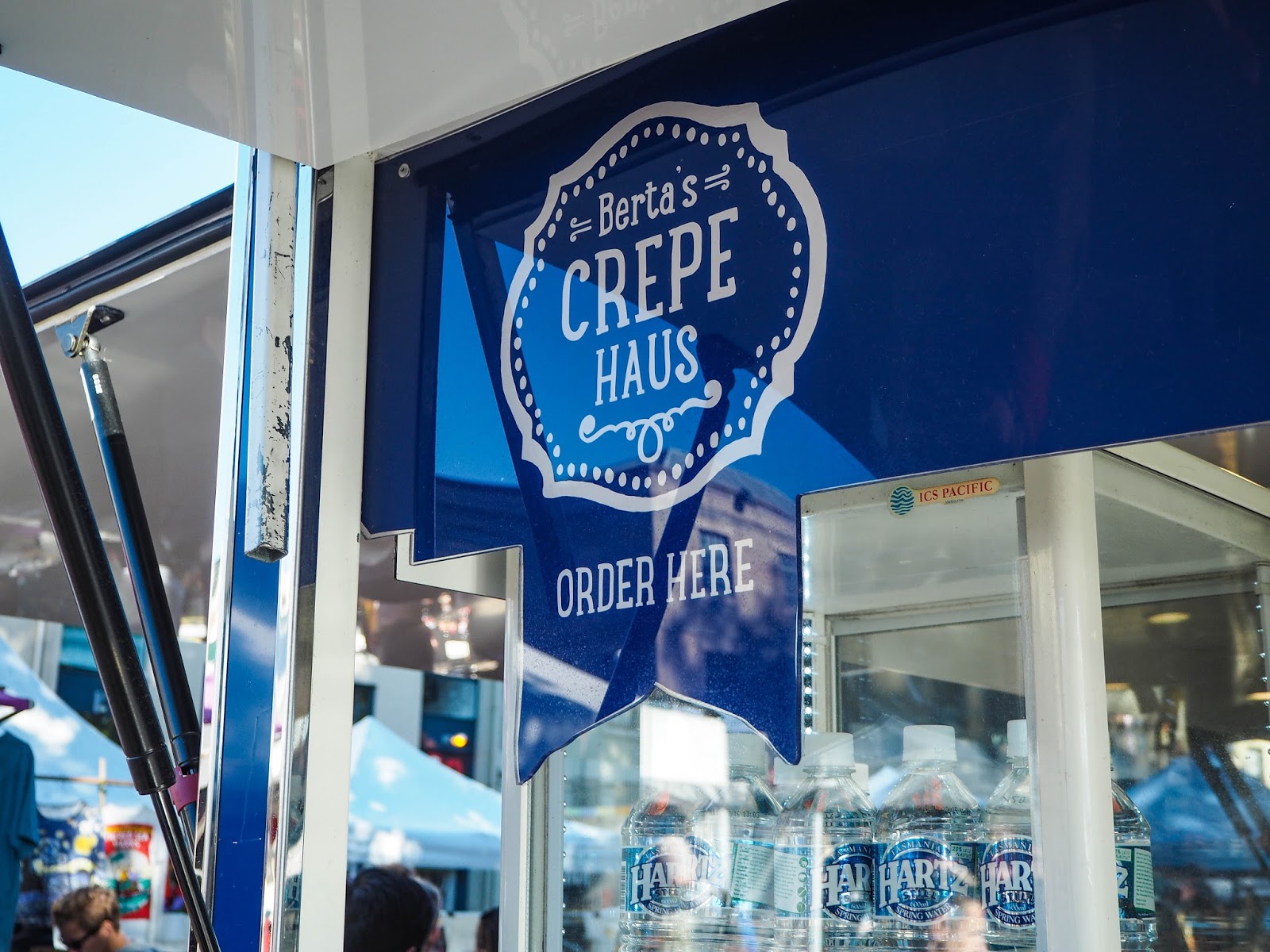 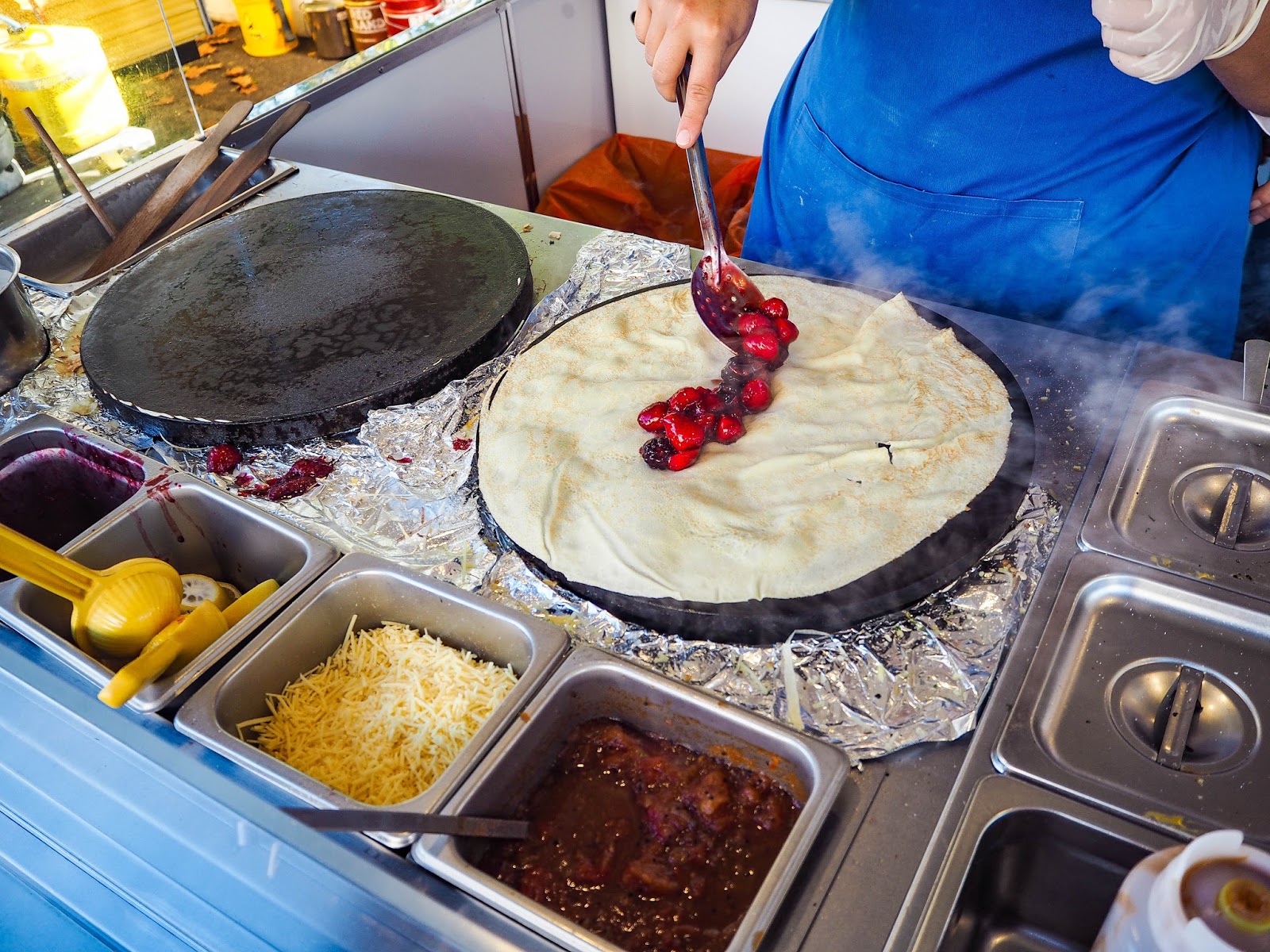 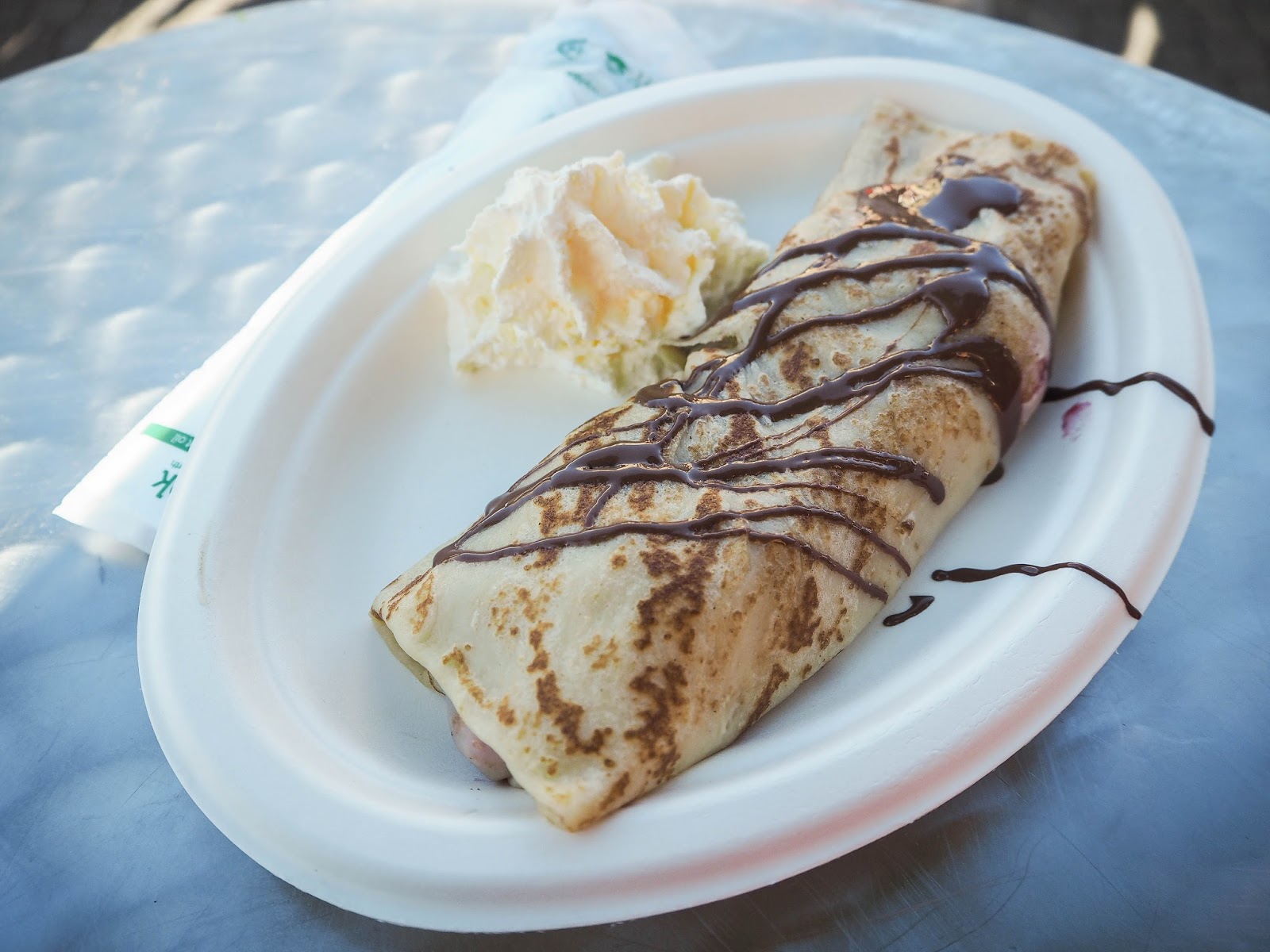 We ended up doing a savoury-sweet pattern as we wound through the market, and Berta’s Crepe Haus was our first dessert-based stop. A crepe is pretty simple by all accounts, but what I loved here was the local ingredients. The sheer quality of the local produce in Tasmania is mind-blowing, with even a simple apple knocking my socks off, so the blackberries, strawberries and raspberries on top of my crepe were more than enough to warrant a mention here. 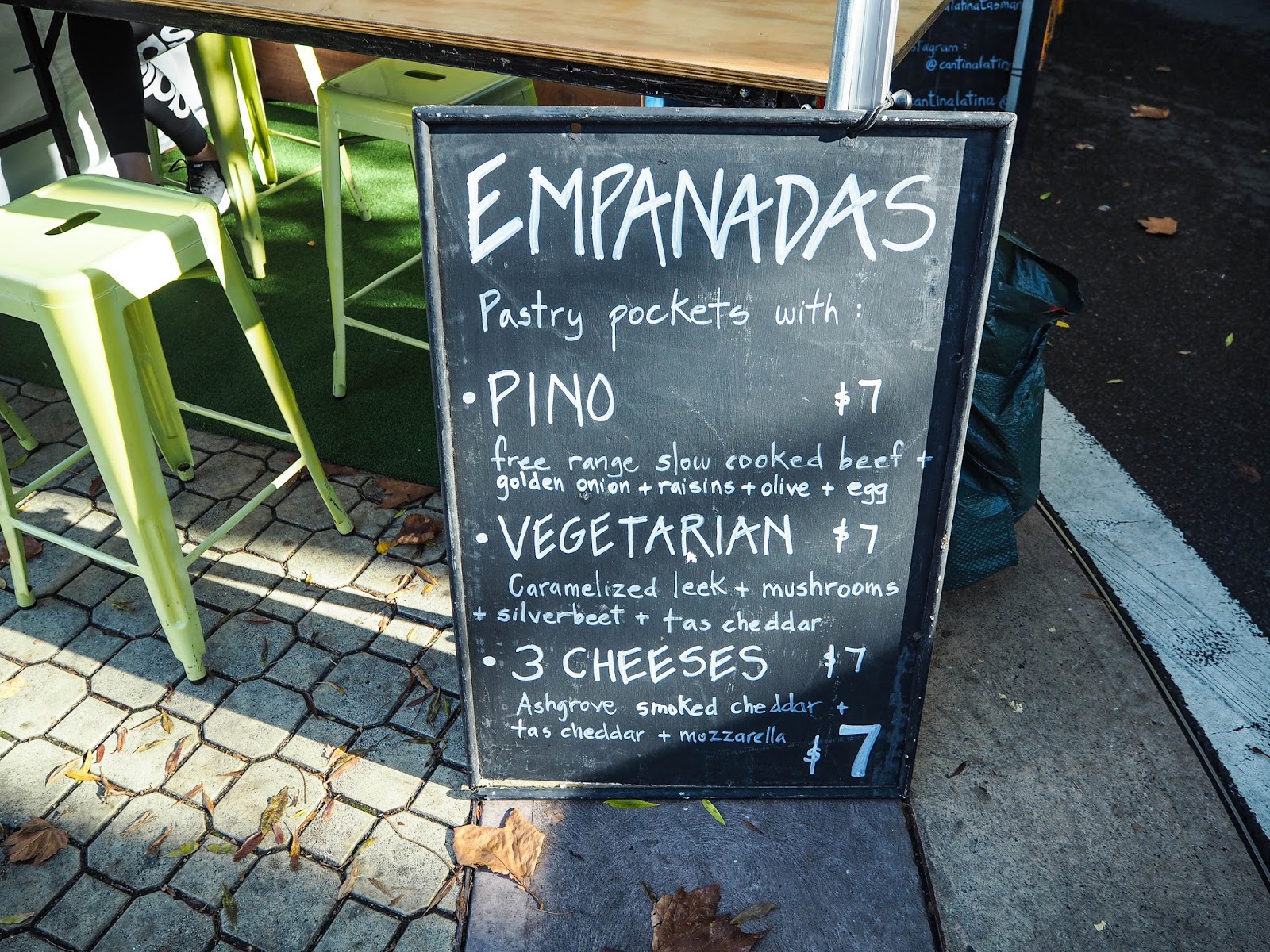 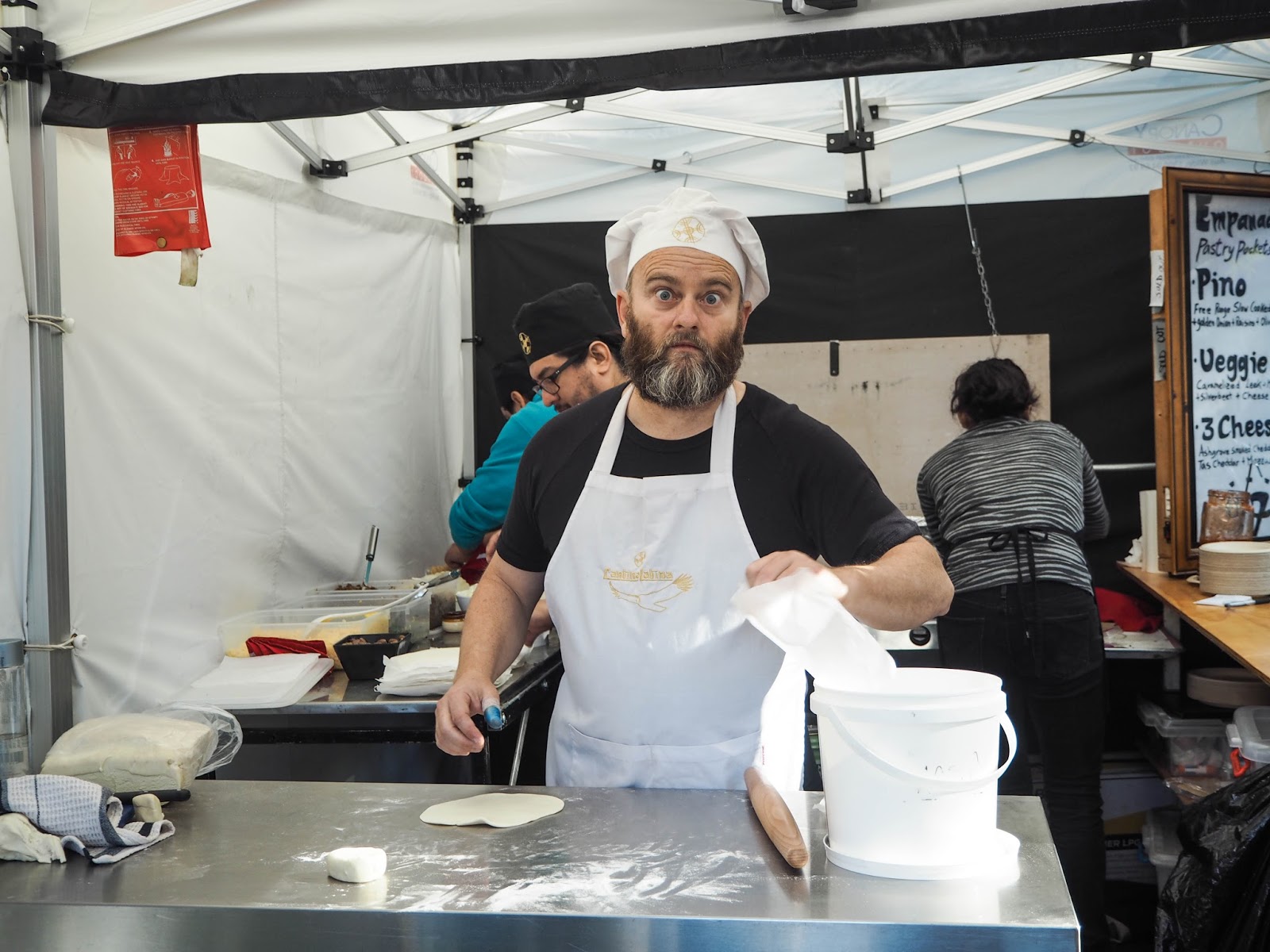 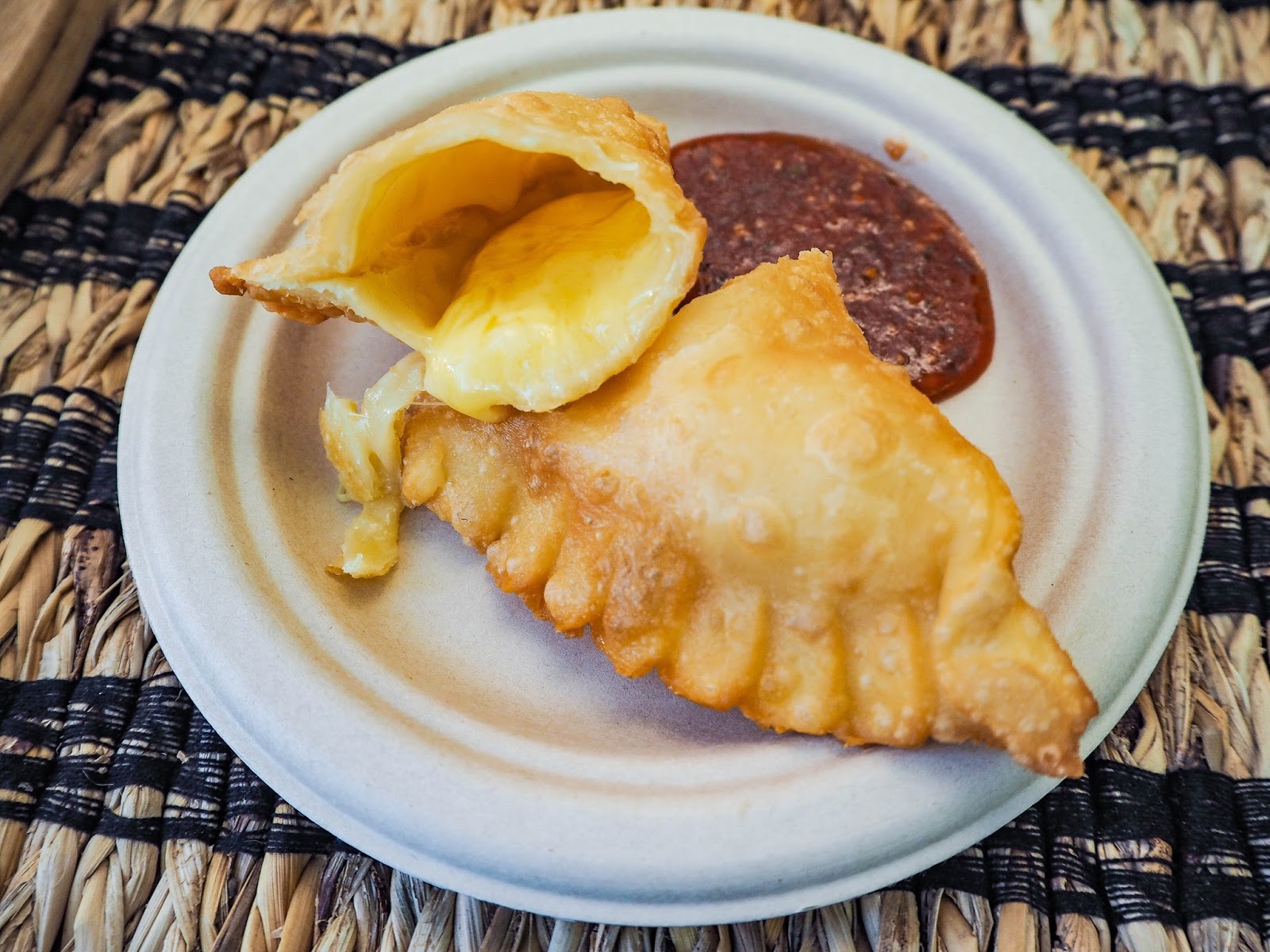 Served by a big bearded chef who threw us banter and beaming smiles, we plucked for the three cheese empanada from Cantina Latina, stuffed with Tasmanian smoked cheddar, a regular cheddar and mozzarella. The latter made the insides have that super pleasing stringy quality throughout but the stand out flavour was the smoked cheddar. Not overpowering, just deep in taste, and so perfect with the mild chilli dipping sauce that came with it. 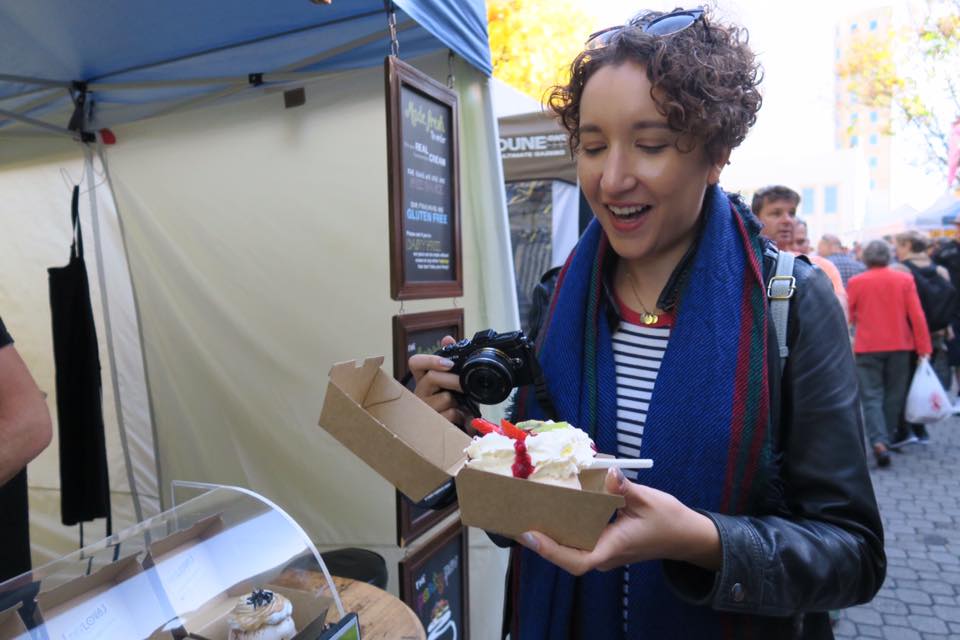 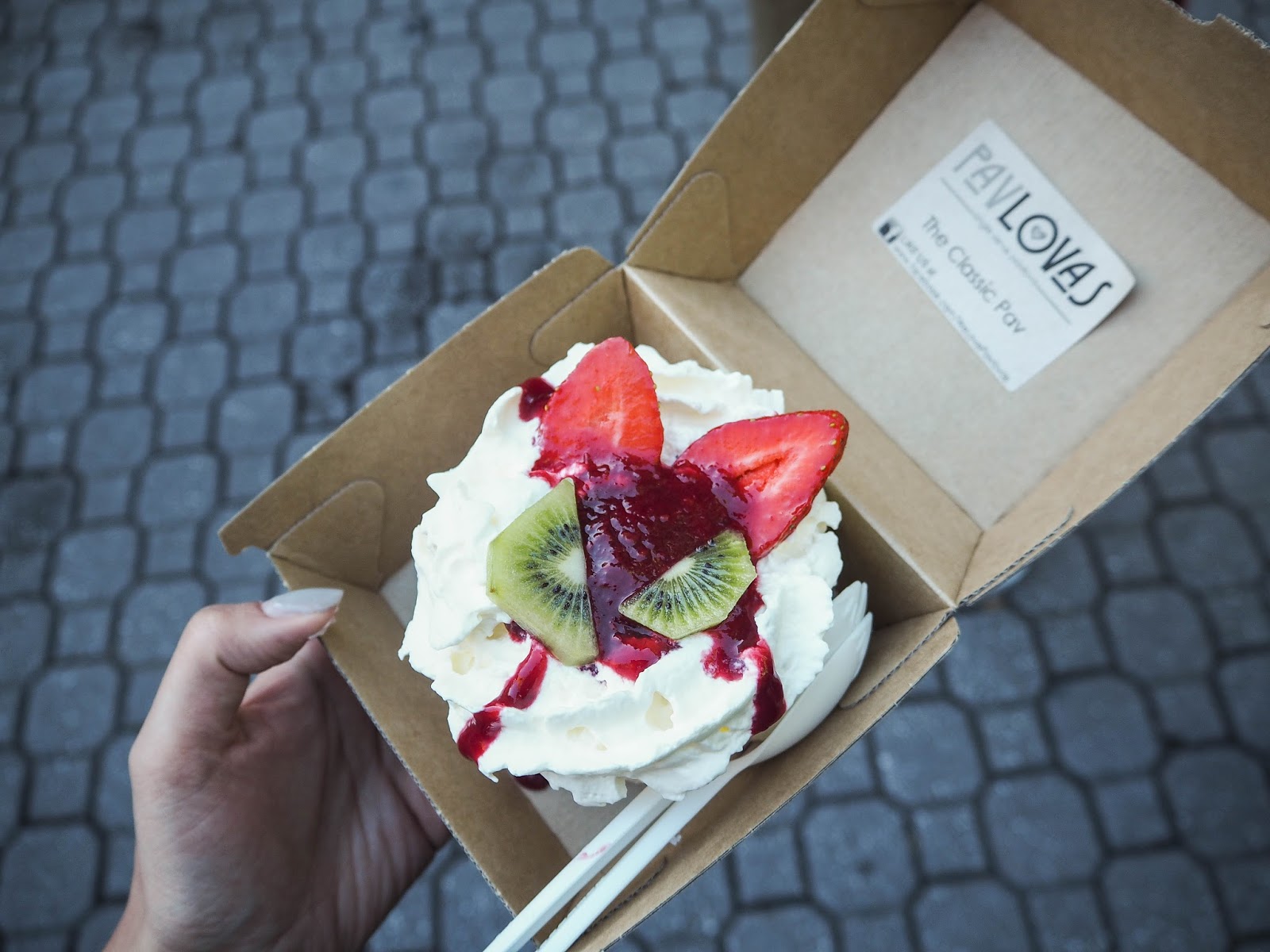 I sure do love me a pavola. This little stand sells single serve portions that include a big ol’ individual pav topped with cream, strawberries, kiwis and a raspberry sauce. I’ll be honest, yes, the ingredients are fresh and it was utterly delicious, but it is essentially what it says on the tin. I rate it so highly because anywhere that can give me a pavlova to-go is worthy of an enthusiastic ‘You’re hired’ from Lord Sugar himself. 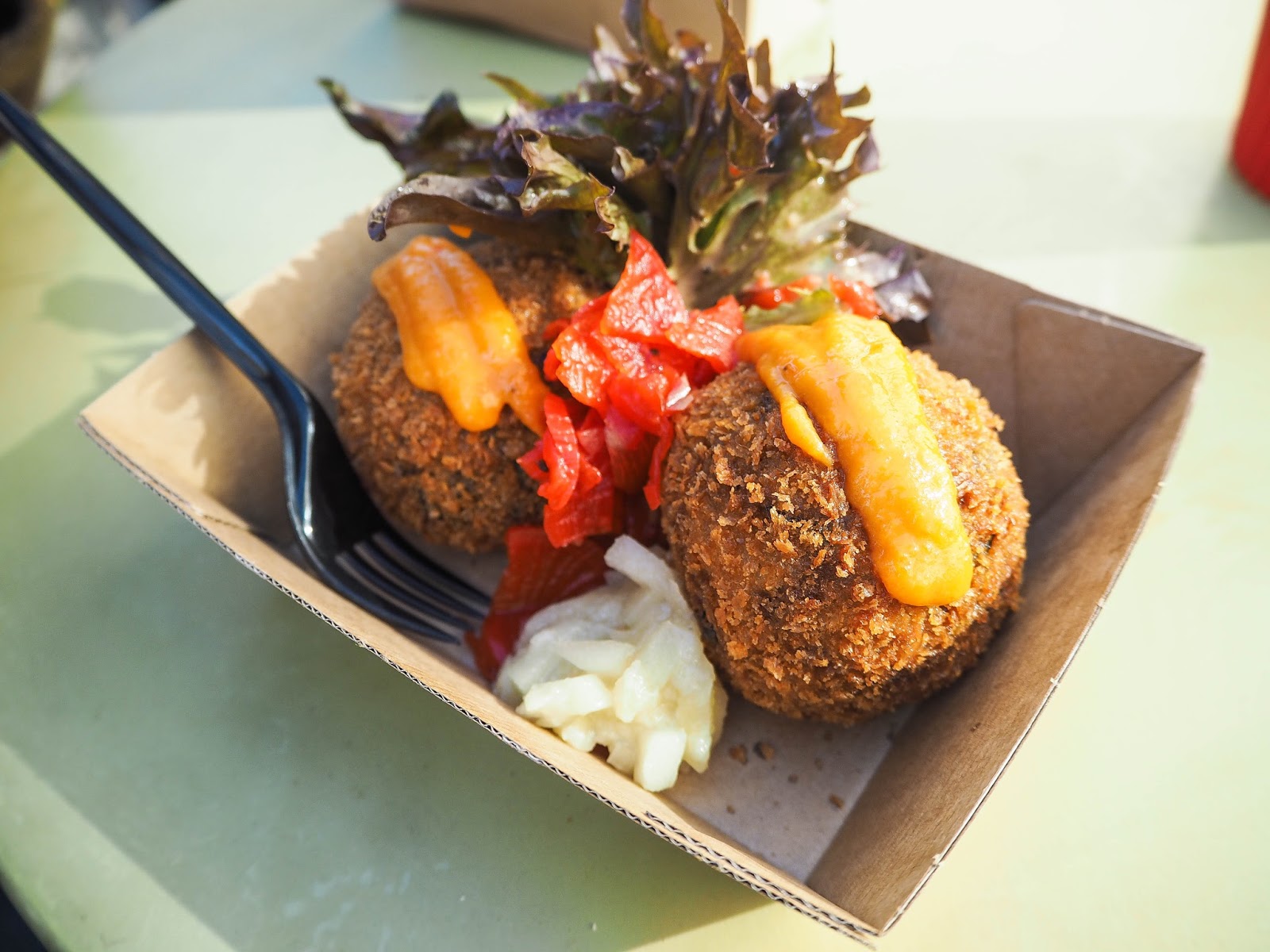 Having arrived in Australia a month after visiting South Korea, I was excited to try this take on a classic. The people of Seoul are really into innovation so this didn’t feel like a gimmick and I loved it. The inside was boiled white rice, pumpkin, red pepper, peas, red onion, garlic, ginger and courgette, all squidged up, wrapped in panko breadcrumbs and deep fried. A serving was two of these enormous balls, topped with red pepper puree, sweet apple sauce and a homemade kimchi. It was essentially a Korean arancini ball, the only bibimbap element that was missing was the fried egg on top. But that have tipped me over the edge into deliriously happy. 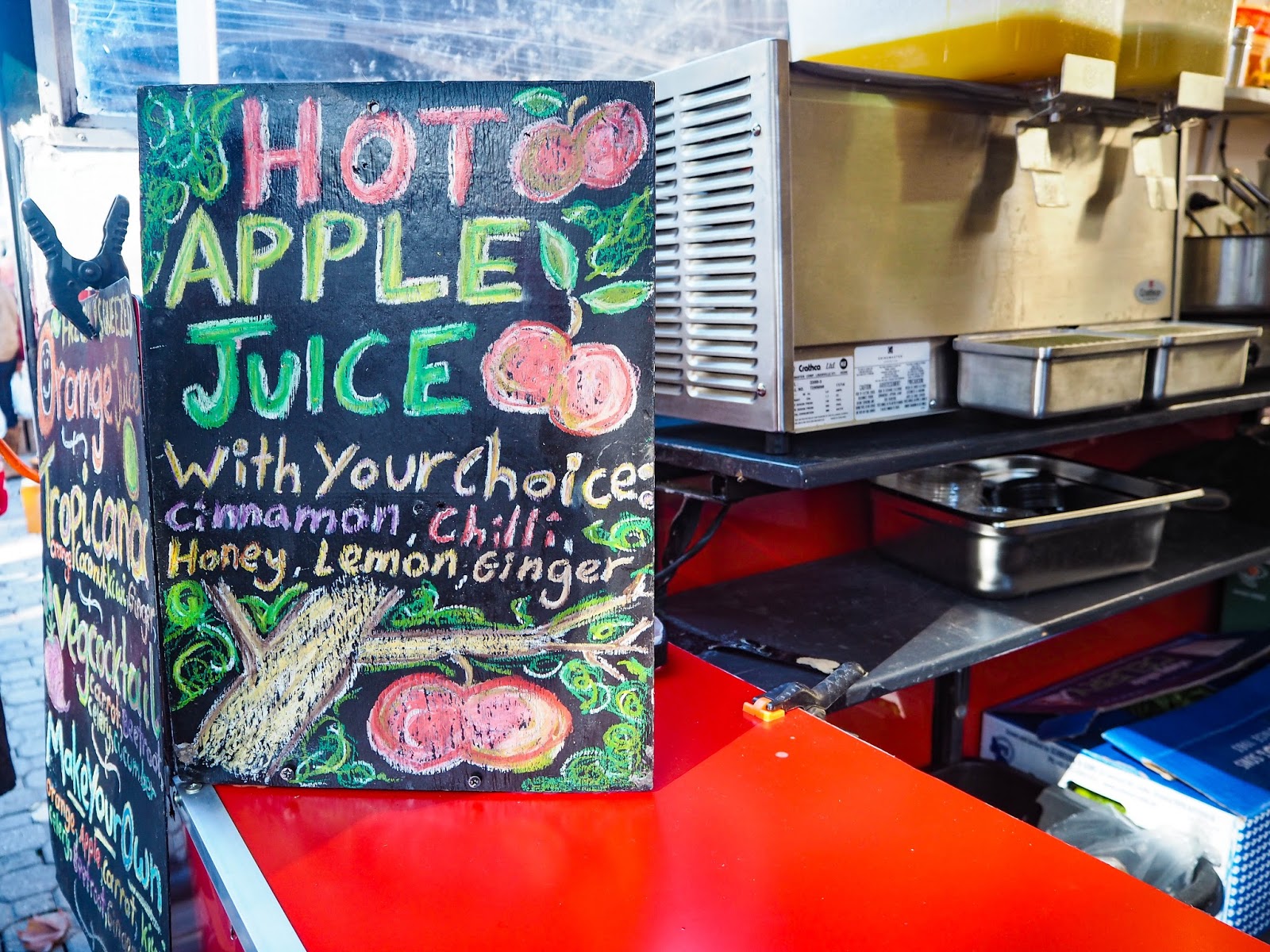 This innovatively named stall really does what it says on the tin. Juices and smoothies of all kinds, but it was autumn in Tasmania and it was a little chilly, so the hot apple juice absolutely took my fancy. You could pick and choose what you wanted added to it, so I went for cinnamon and honey (opting out of lemon, chilli and ginger). The result? Liquid Christmas in my belly. 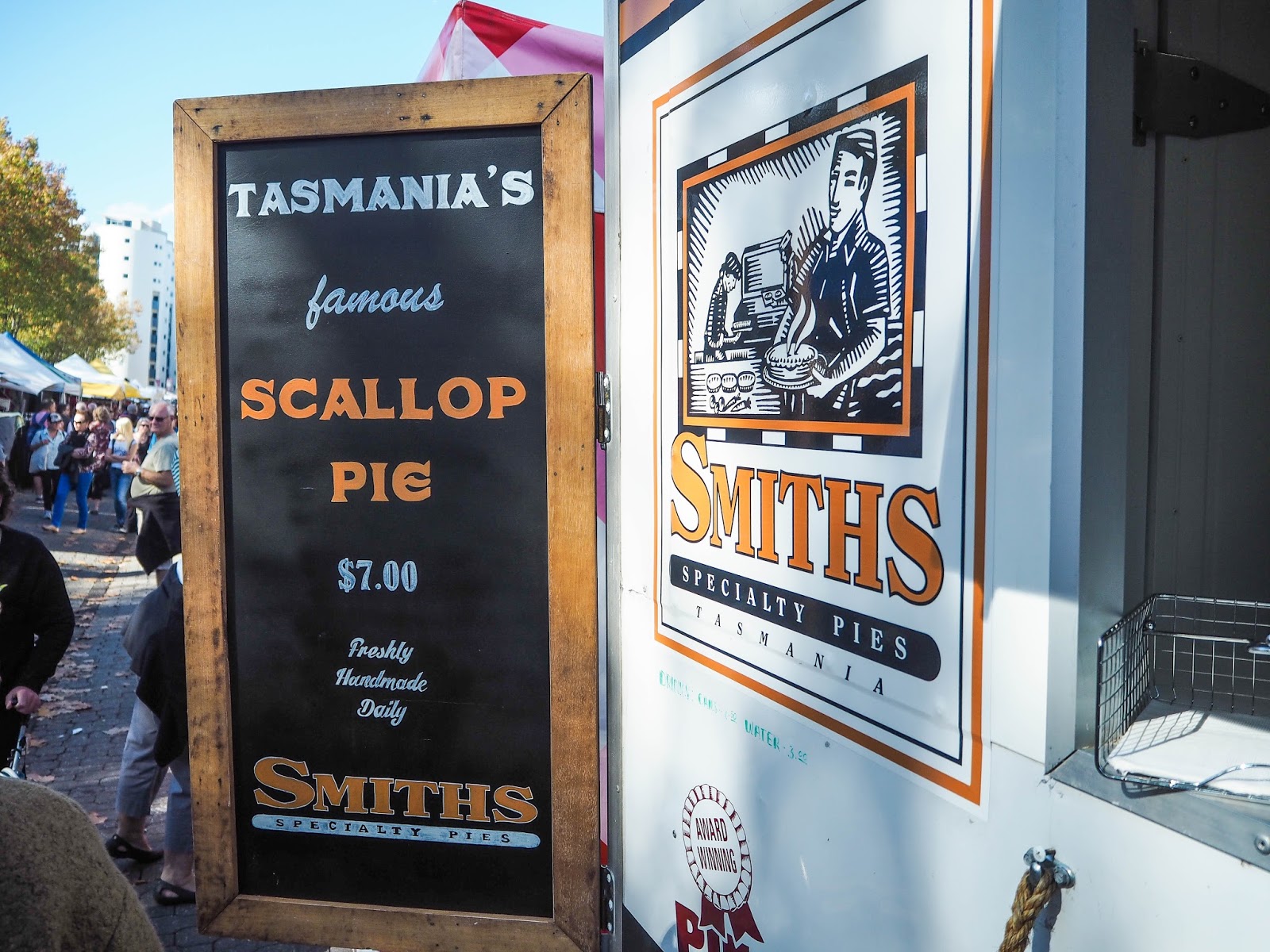 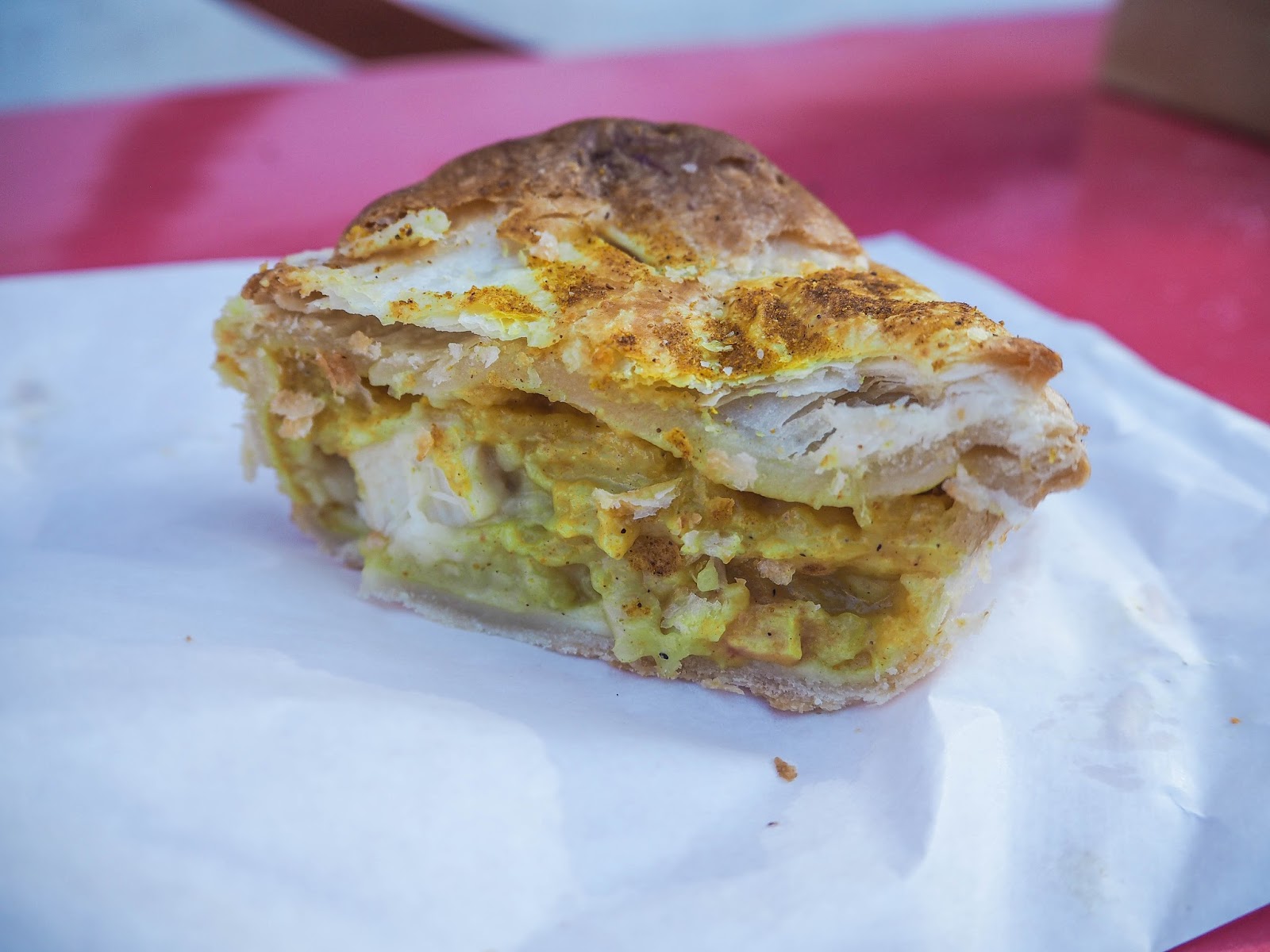 The seafood in Tasmania is legendary, based on the fact the surrounding waters are some of the cleanest in the world. So the scallops that flourish there are not only enormous, but beautifully rich and filling. The scallop pie looked like the sort of pie you’d get in a British chippy, with flaky pastry on top but so much more filling than I’m used to. It had a sauce similar to coronation chicken – kind of verging towards curry, but with a strong turmeric influence and no chilli heat. Very different and absolutely one to try out.

Oliebollen from The Smallest Pancakes in Town 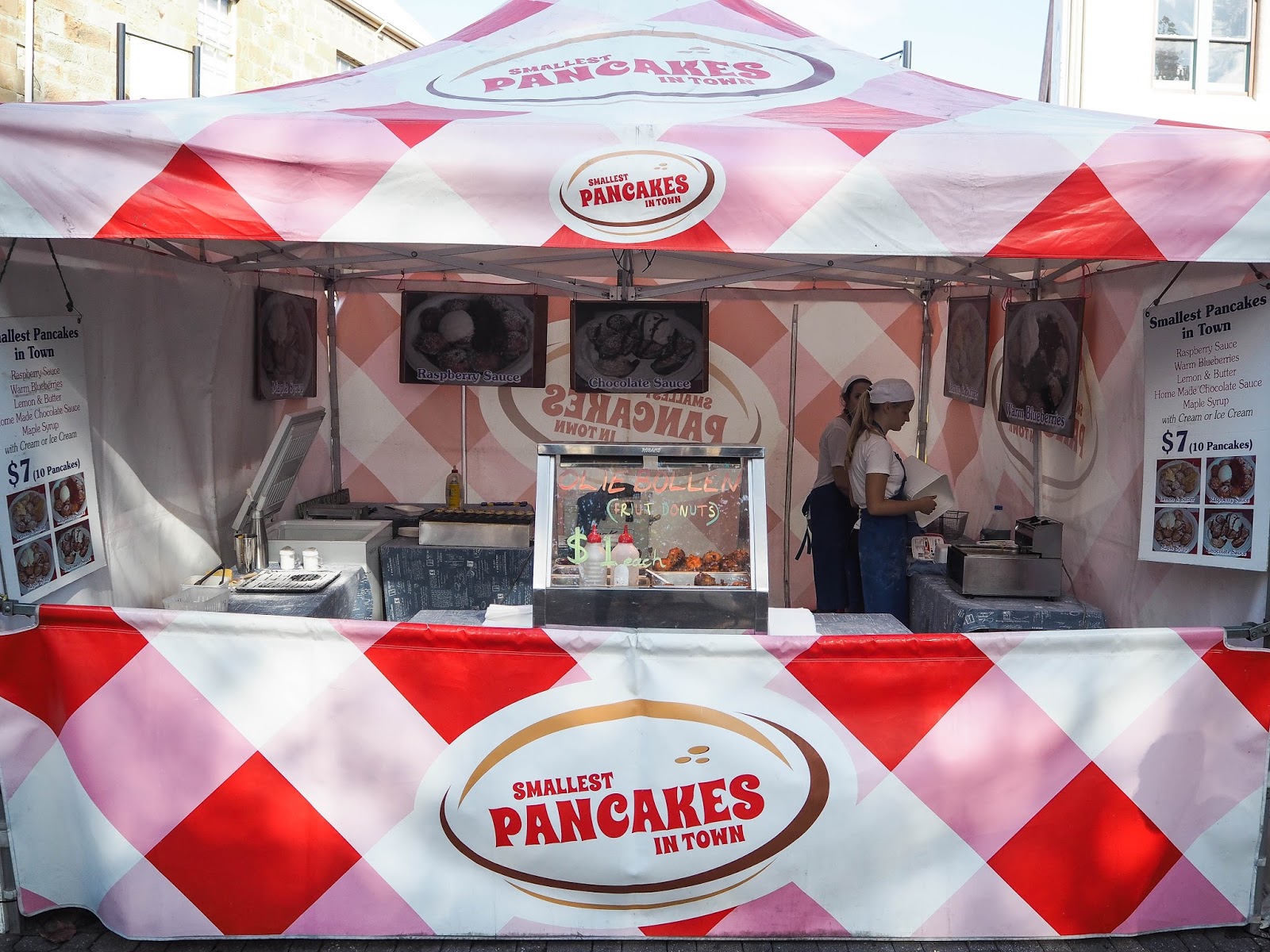 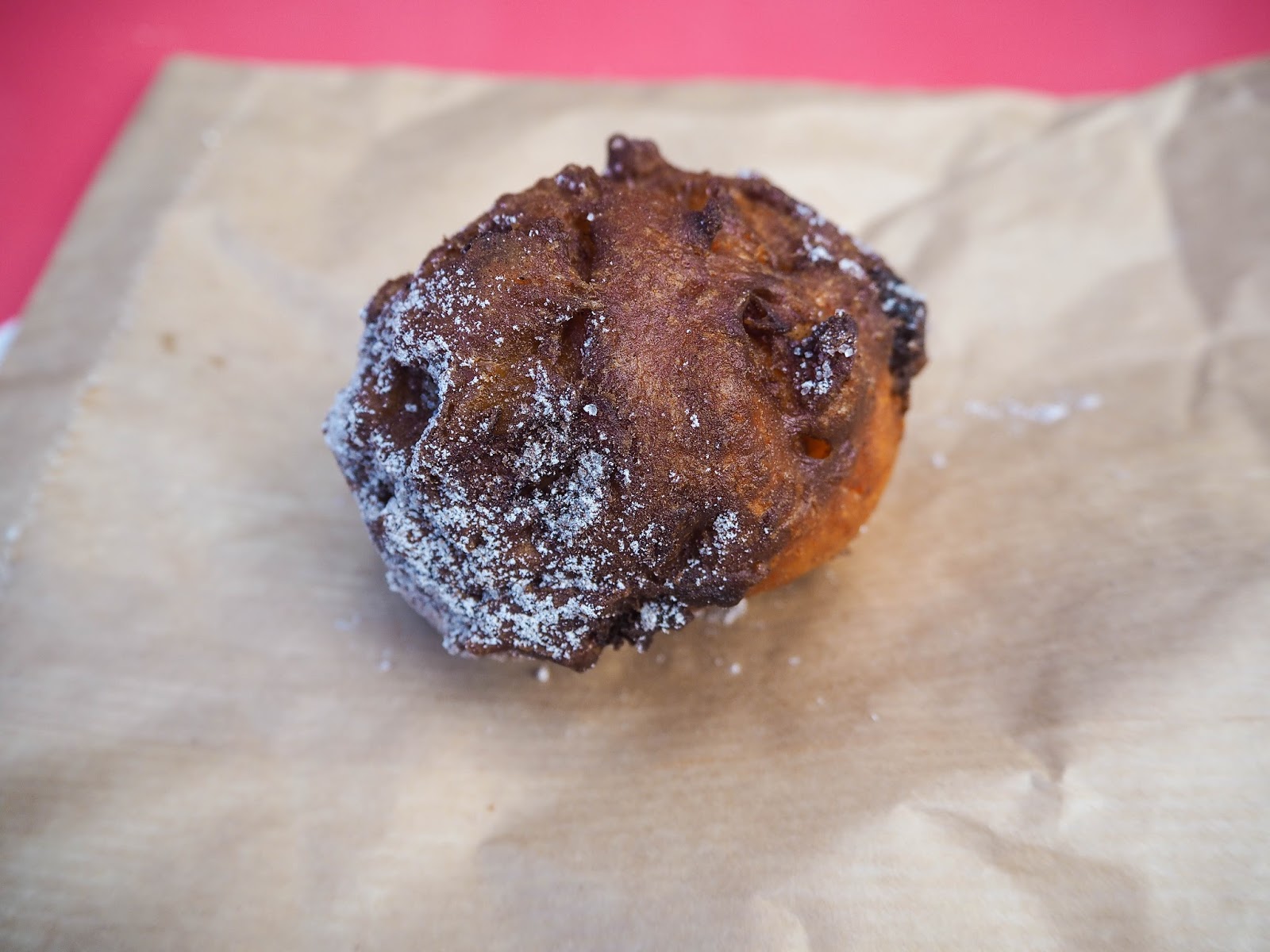 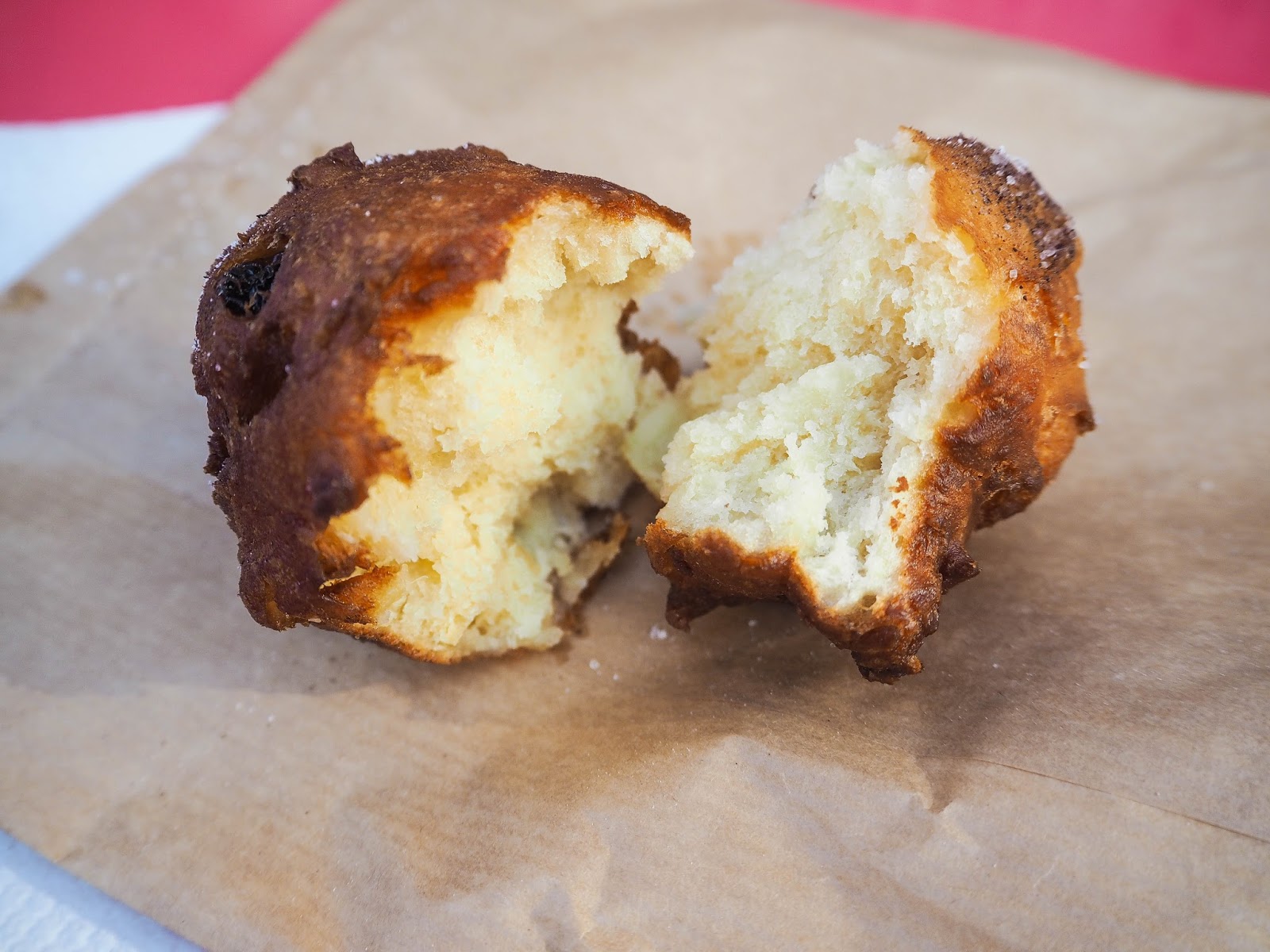 This place does indeed sell teeny, tiny pancakes, but we were drawn in by the stellar looking oliebollen. They’re a traditional Dutch and Belgian food, made of a dried fruit filled dough which is then deep fried. I’m not really a fan of dried fruit, so I tried it and then actually picked bits out but I perservered because the dough was so good. 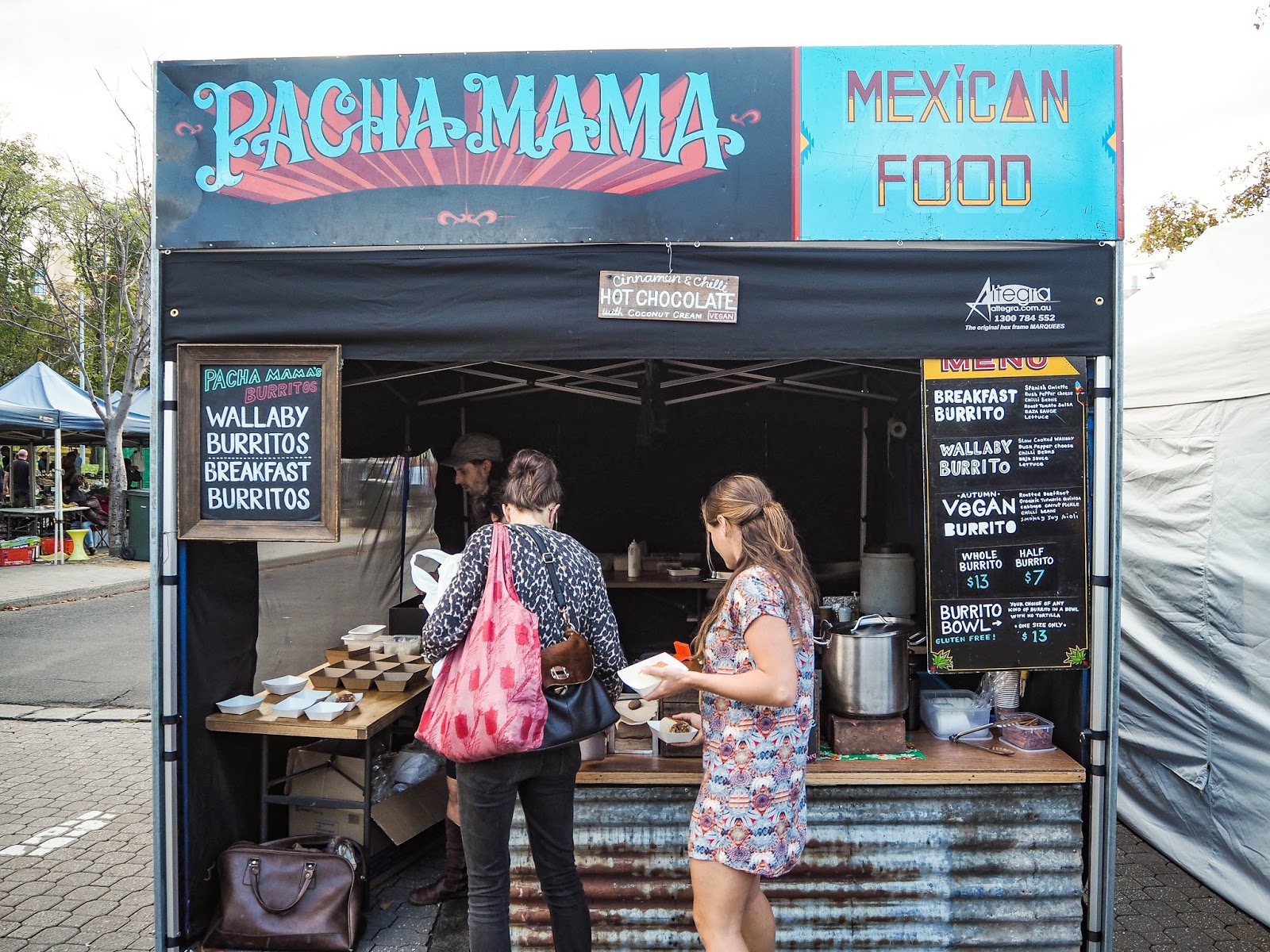 By the time we reached Pacha Mama Burritos, we’d already given up on…well…everything. We were so full. We were sleepy. We weren’t going to eat anymore but lo and behold, as we headed towards the exit, we couldn’t help but be drawn in because we were in Australia, and it seemed only right (and a bit weird) to eat wallaby. The meat itself is like pork in texture, but it wasn’t particularly noticeable as a flavour when topped with refried beans, lettuce, chilli mayo and a smoky chipotle sauce. We split one between us and sat on the floor to eat it. Because we physically could not stand up anymore.