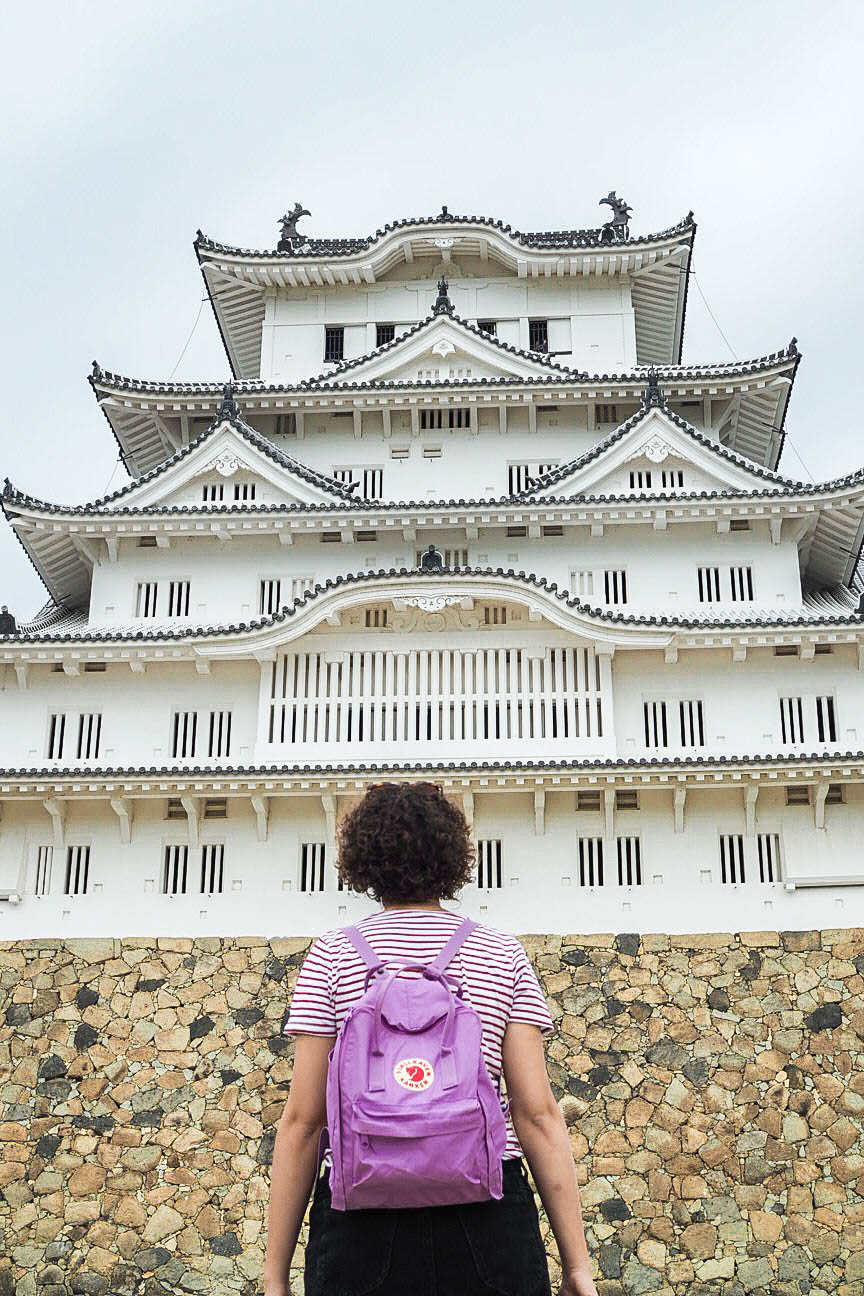 Himeji Castle has a lot to answer for. Its iconic structure and shape has been the blueprint for literally hundreds of imitation buildings across Japan and the world. You might not know it by name, but I bet that as soon as you see it, you know it. Or at least have referred to the emoji it’s influenced as ‘that Japanese castle’. And to be honest, if it’s famous enough to have its own emoji, well, consider me in. I realised it was only an hour away from Osaka, my first stop in Japan, and as I had a day to kill before the rest of my travel buddies arrived, it became cemented into my itinerary. 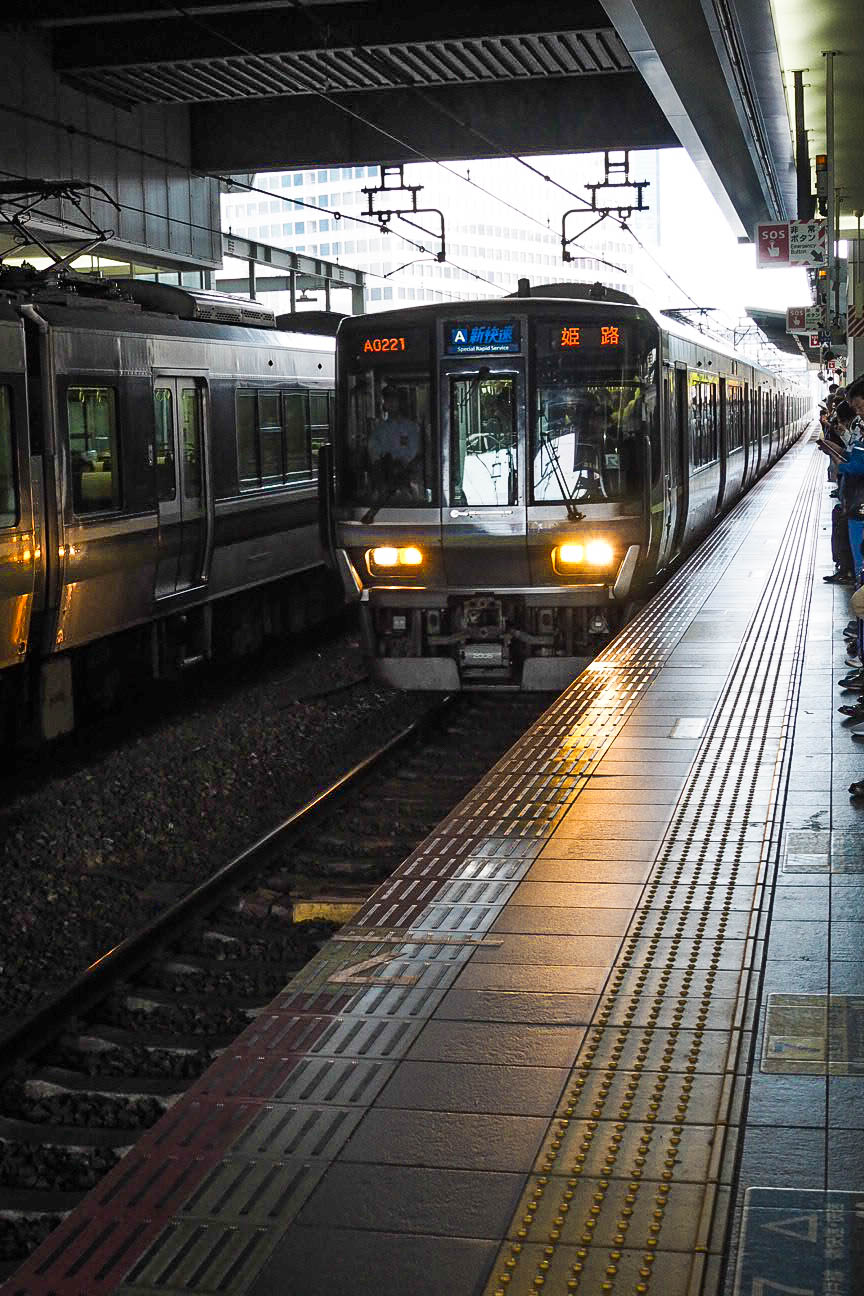 The train journey wasn’t particularly scenic (and I missed the bullet train through sheer confusion whilst navigating the Osaka subway system for the first time), but I could see the castle as we pulled into Himeji station and an uncontrollable ‘OMG THERE IT IS’ grin spread across my face. I’d read that you can hire bikes in the city, but tourist information let me know that they weren’t allowed in the grounds so I skipped two wheels and stuck to walking instead. The castle is immediately visible when exiting the station and is a super simple 10 minutes walk in a straight line, but I needed breakfast first. 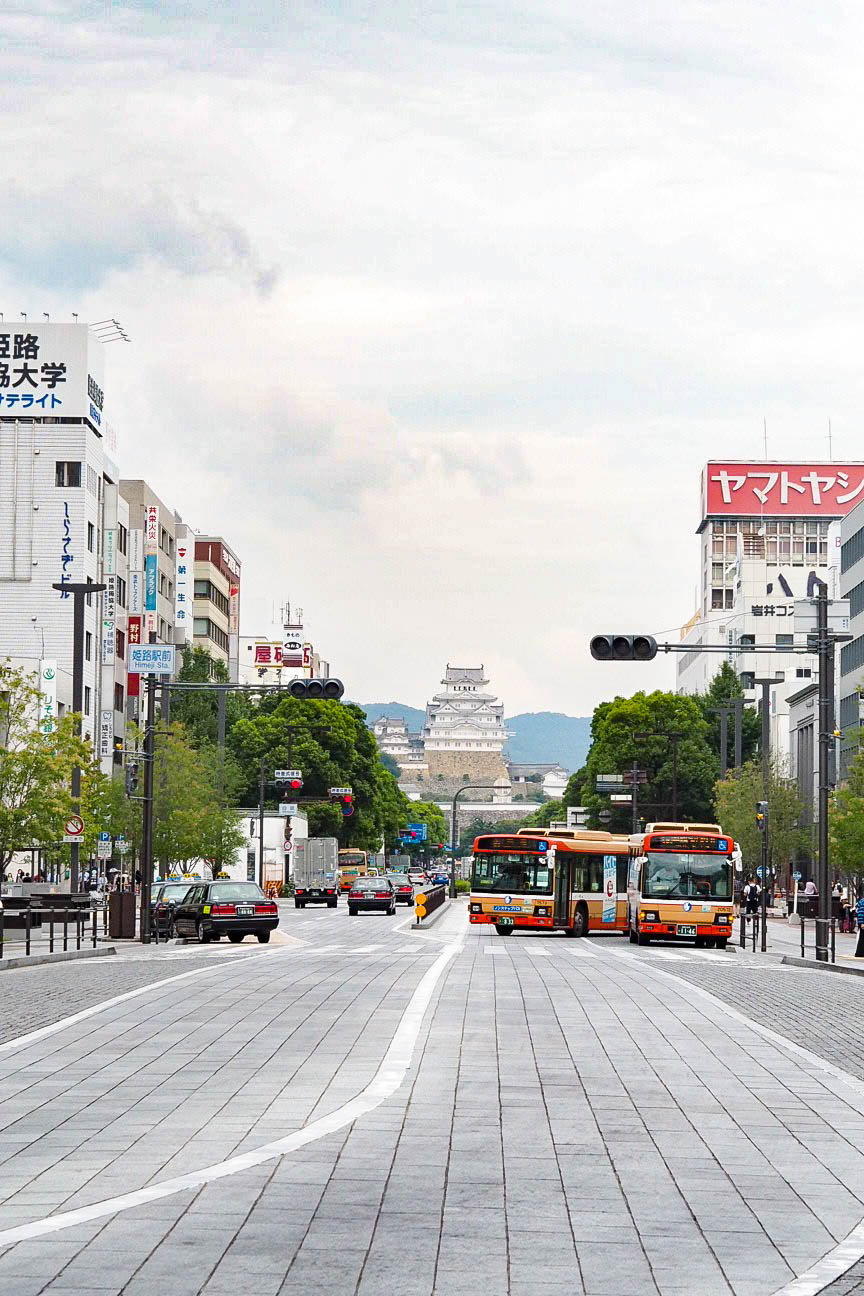 I stopped for breakfast in a little cafe called The Farmer’s Daughter where I was greeted by a robot waitress who wanted to know if I was staying in or taking away. A human waitress then kindly showed me to my table and I ordered a slightly strange, but pretty tasty, meal of toast, salad, one single chipolata and some scrambled egg. I didn’t have a huge amount of time to see the town, as I was heading to Kobe for an early dinner, but it was clear that they are very proud of their castle – even the roadworks signs have happy little castle faces on them! 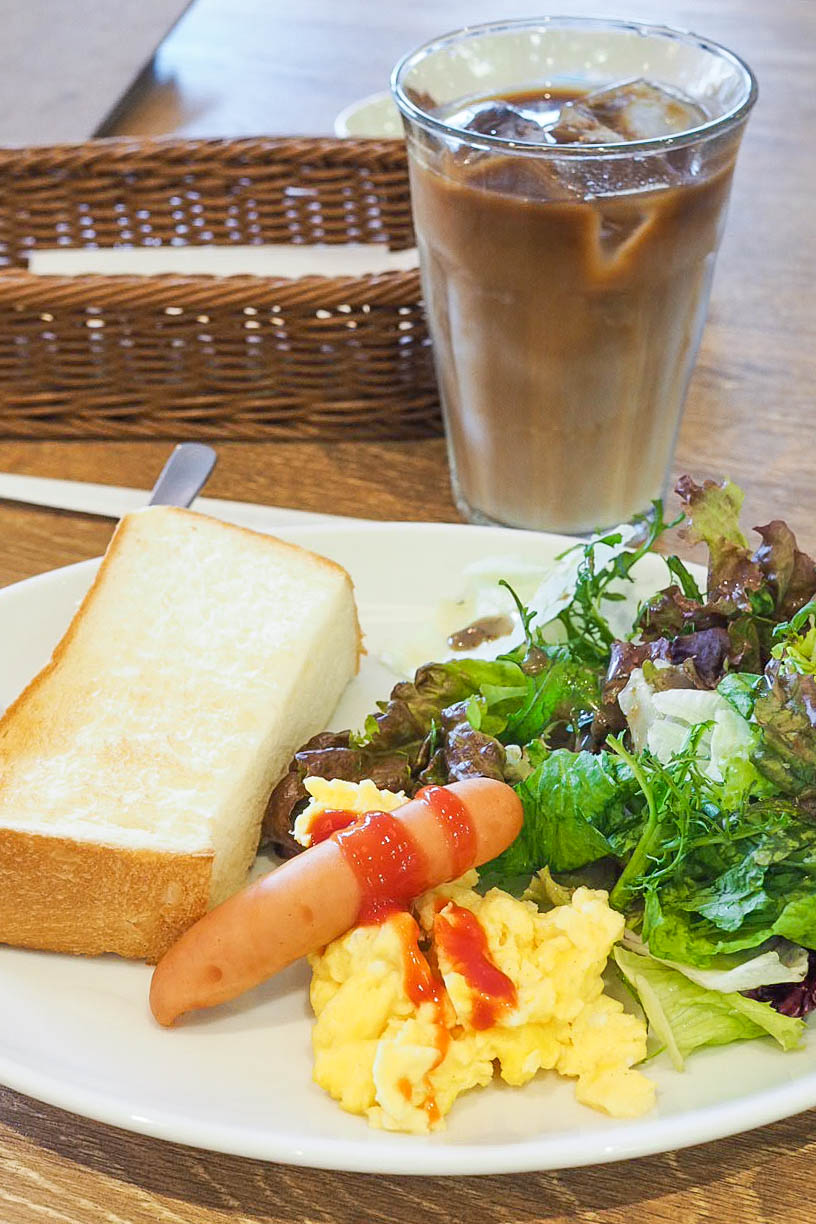 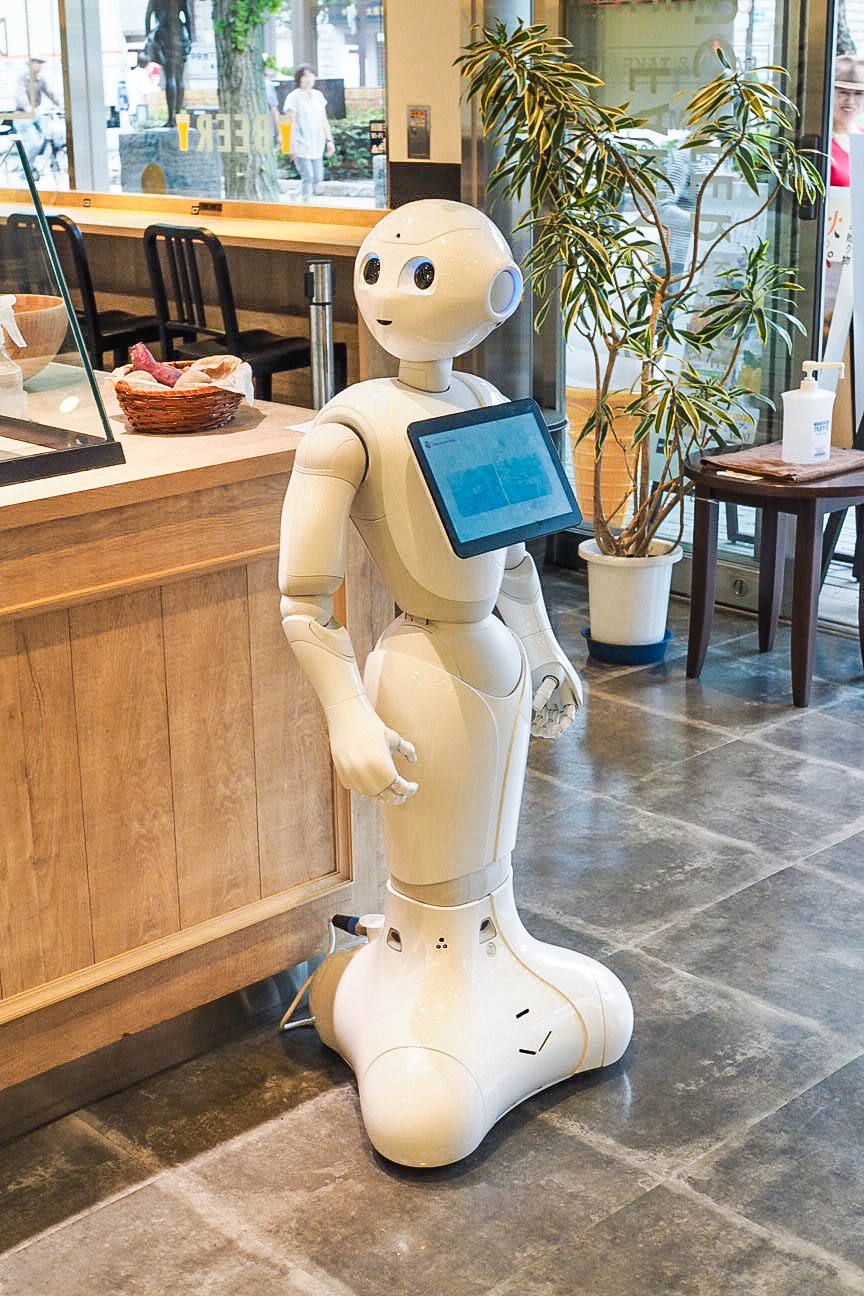 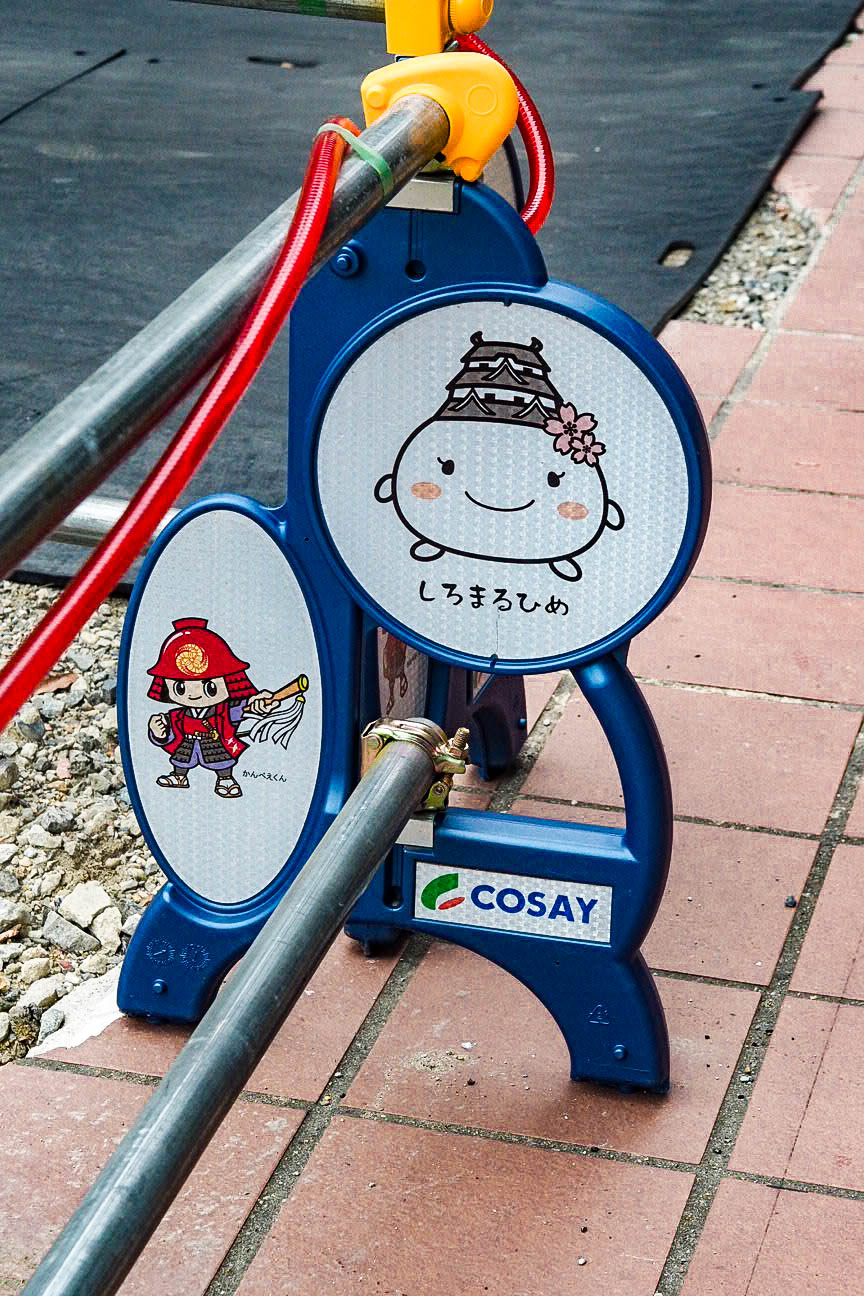 Being a Wednesday, thankfully the castle wasn’t overwhelmingly busy; my fellow tourists appeared to be Chinese tour groups or Australian school trips. The building itself is perched majestically atop a stone fortress and surrounded by a now-empty moat. It’s characteristic rooftop waves spread out and up, and the clean, white facade gives it a regal feel, hundreds of years after it was last lived in. 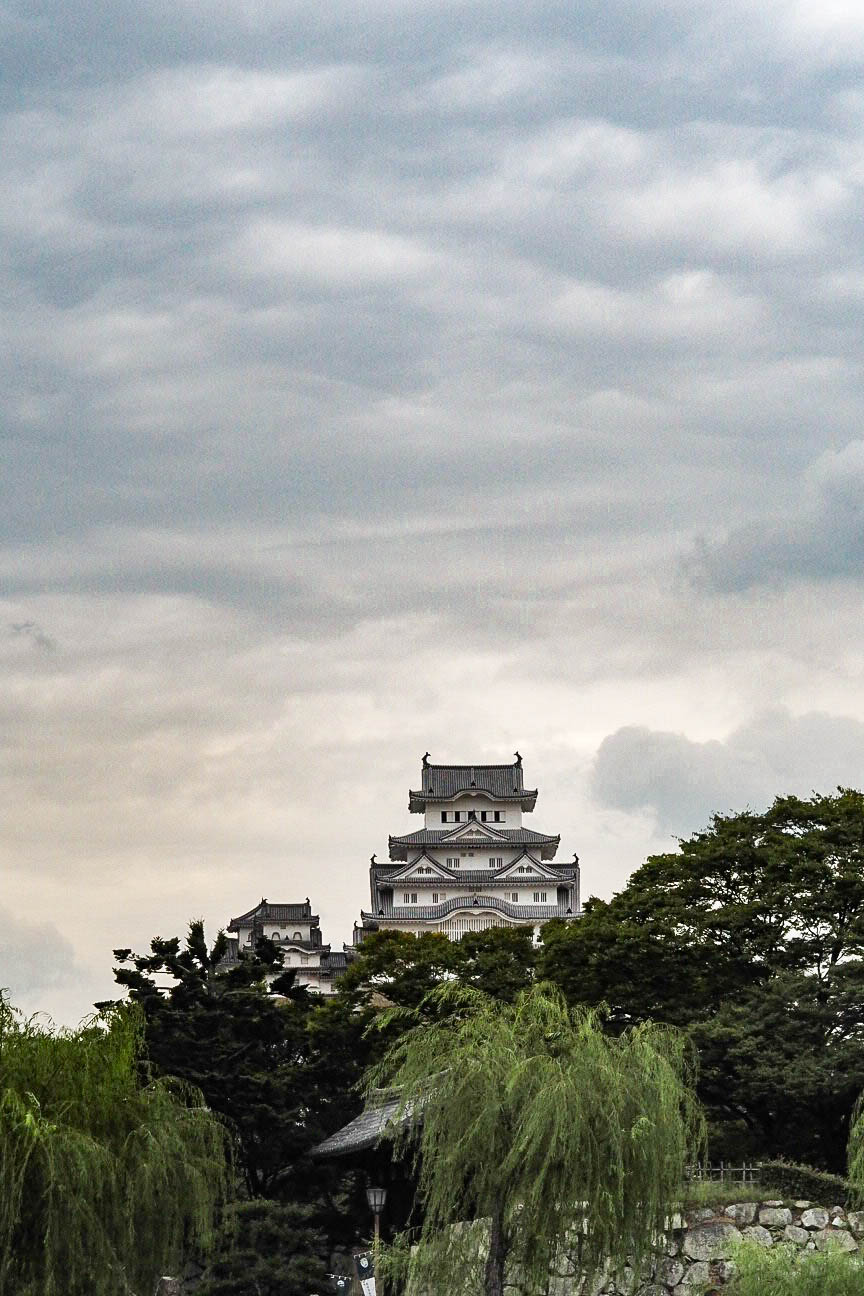 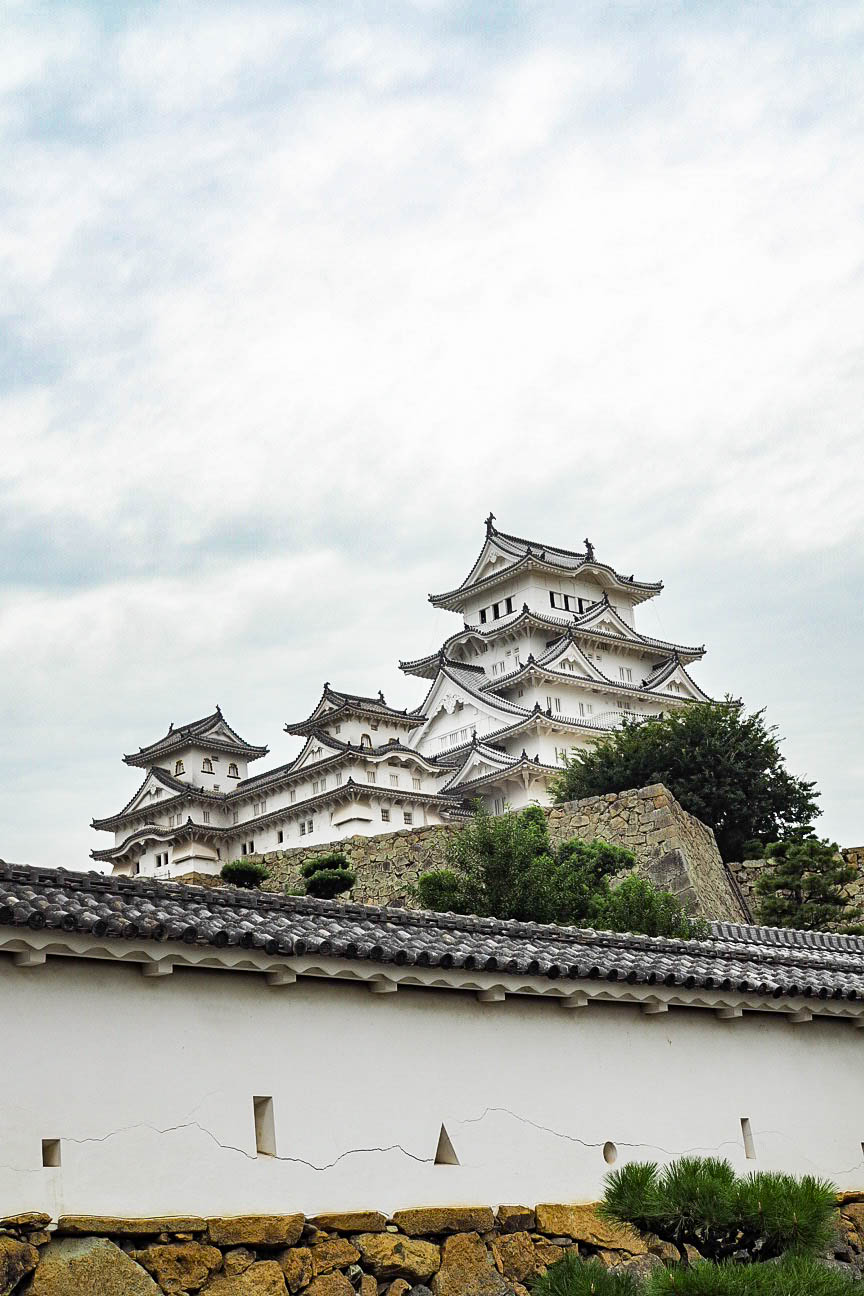 The main attraction is the opportunity to go into the castle and climb all the way to the top, which is all included in entry fee (Y1000 at the time of writing). Like all temples and places of historical or religious importance, you have to take your shoes off, so I walked barefoot through the oldest castle in Japan, with my Supergas in a carrier bag provided to me. 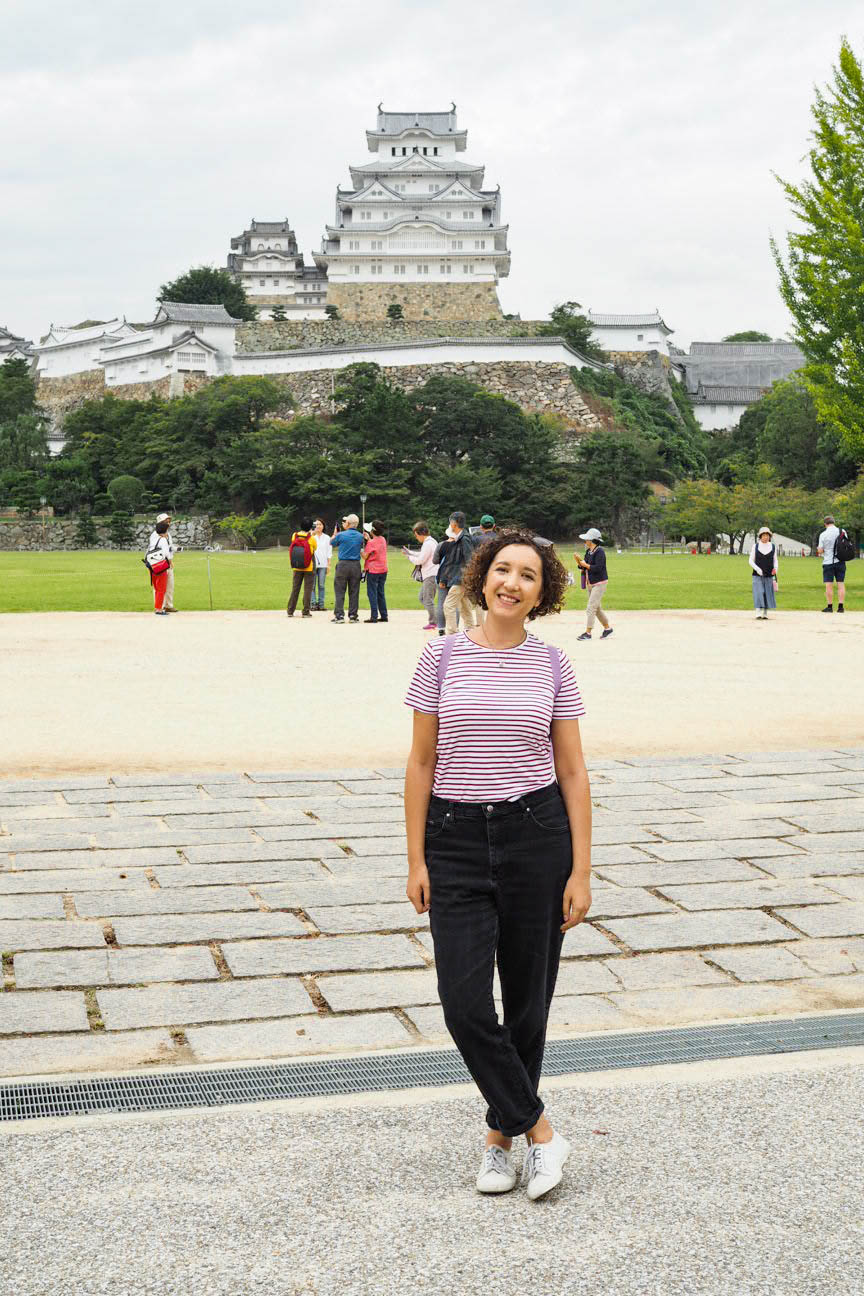 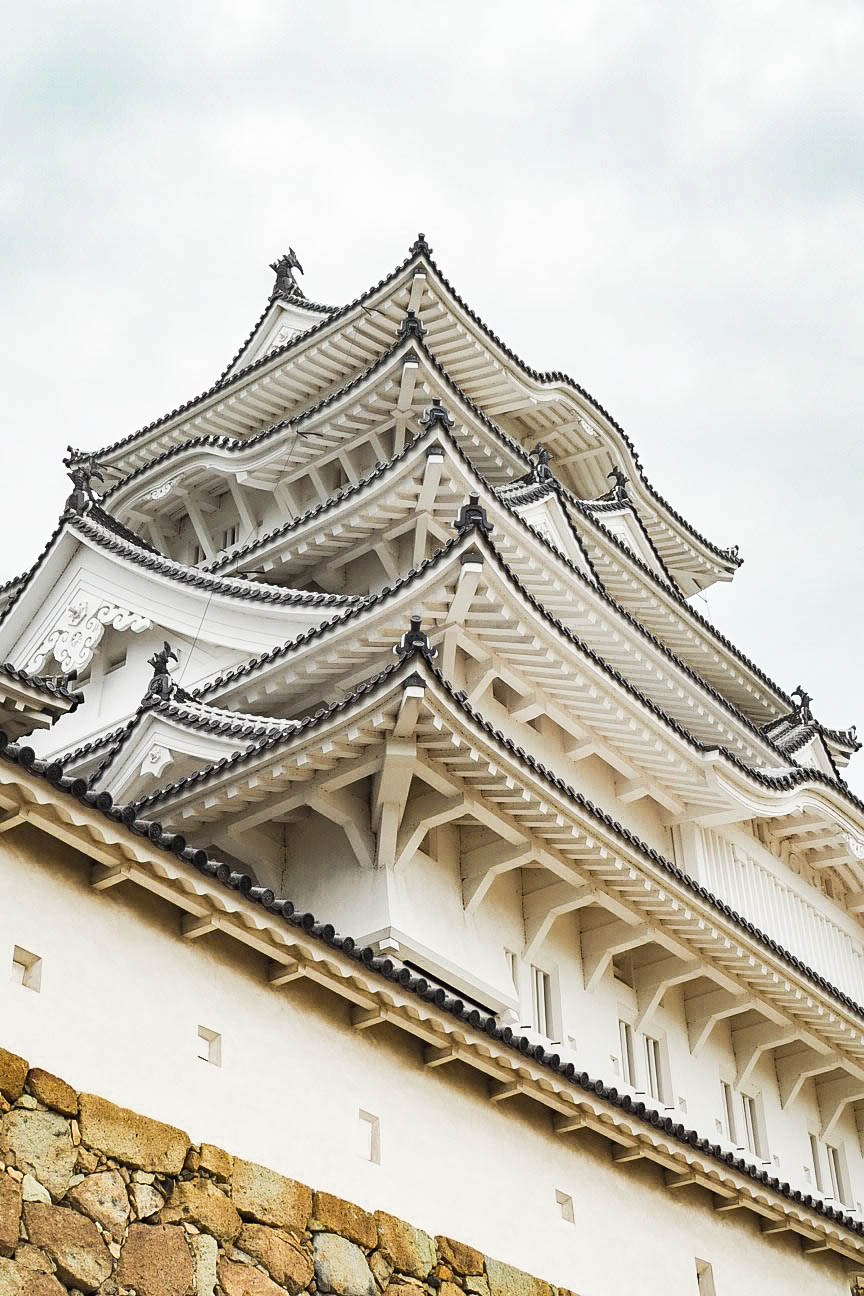 The stairs in the castle are extremely steep and the ceilings are super low. For a 5ft 10 woman with dodgy balance, it meant I had to watch every single step, but taking it slowly meant I wasn’t knackered by the time I got to the top and I was able to take in the vast rooms of the castle along the way. And the effort is worth it. 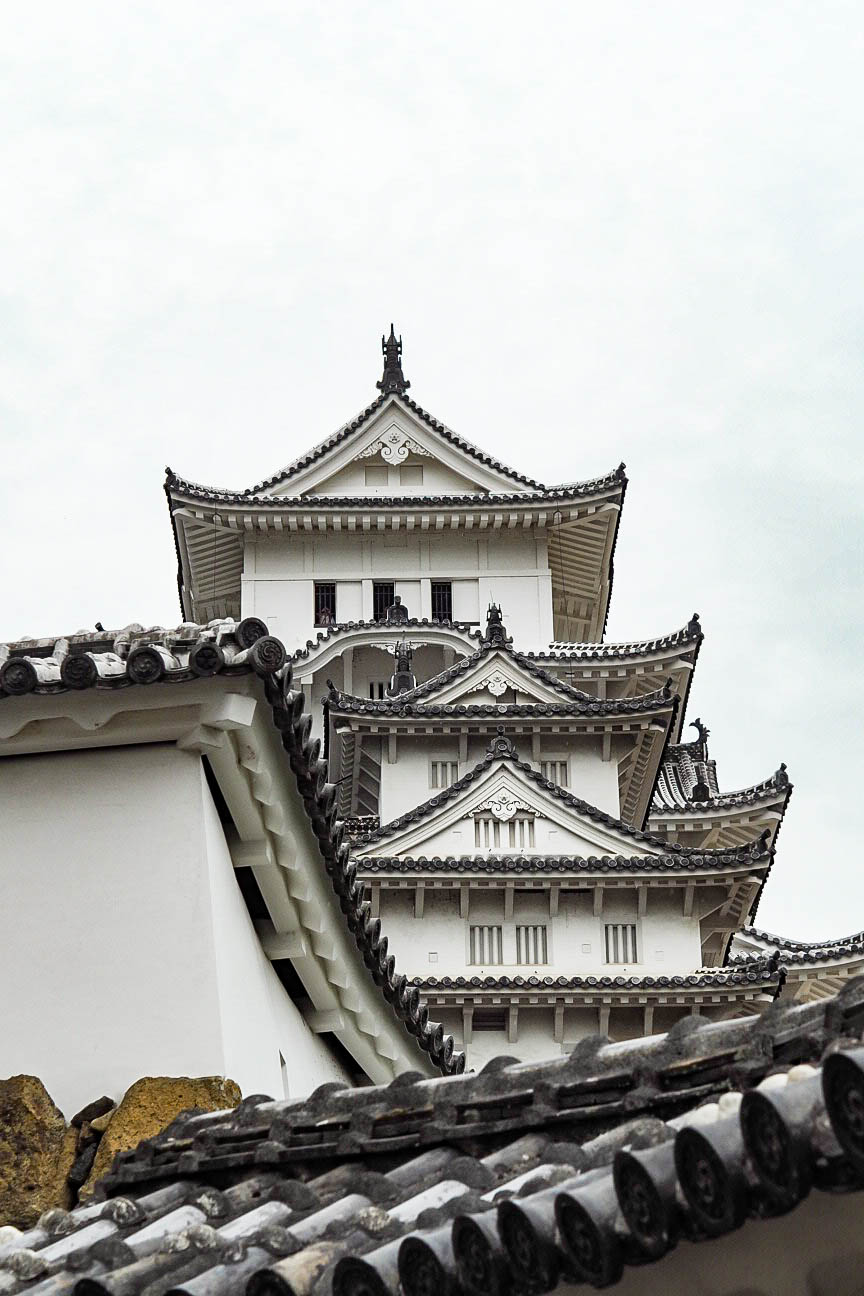 Gorgeous views across all of Himeji and beyond into western Kansai. Of course battles were won here; there’s no way anyone was creeping up on this behemoth! The surrounding gardens scattered with small temples and shrines can also be seen which go a step further to showing how vast the peripheries of the castle grounds are. 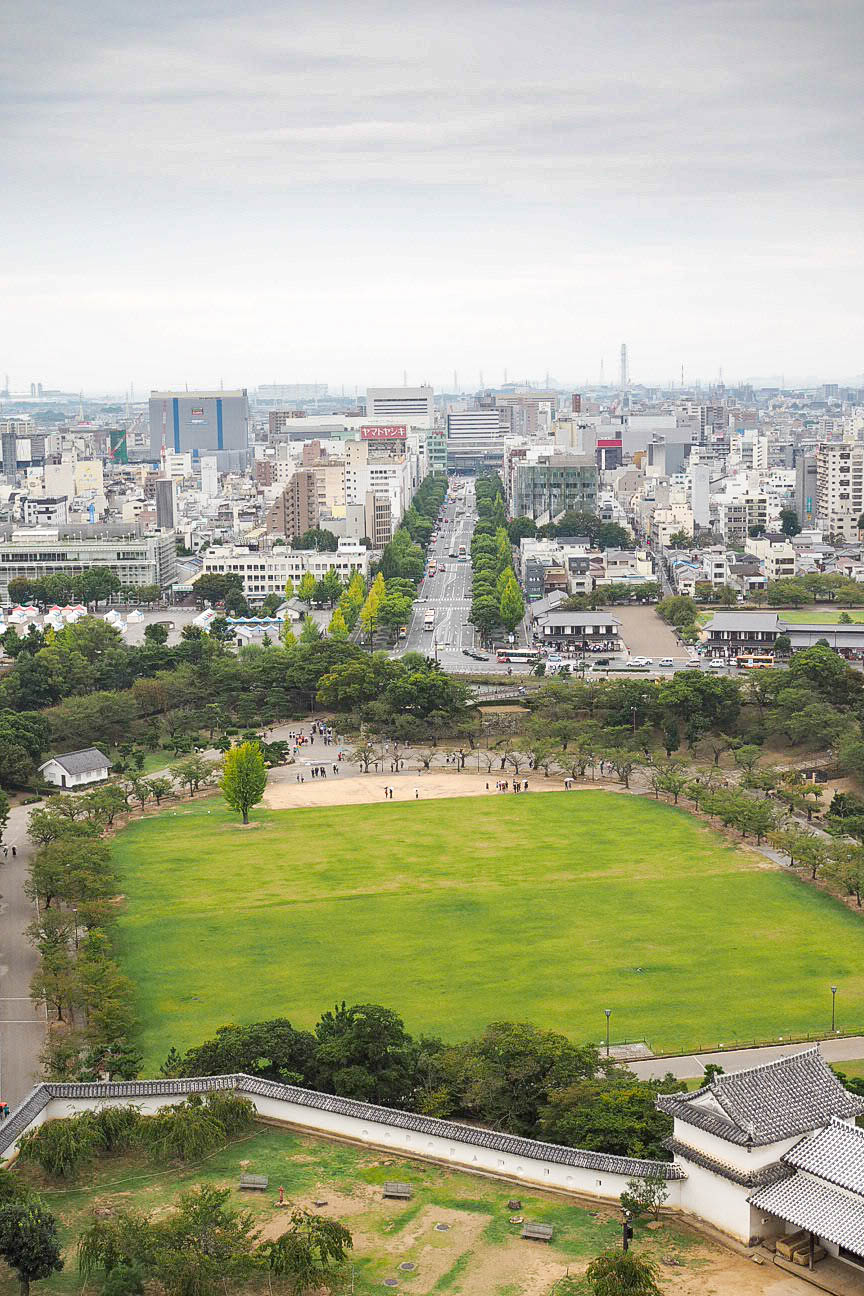 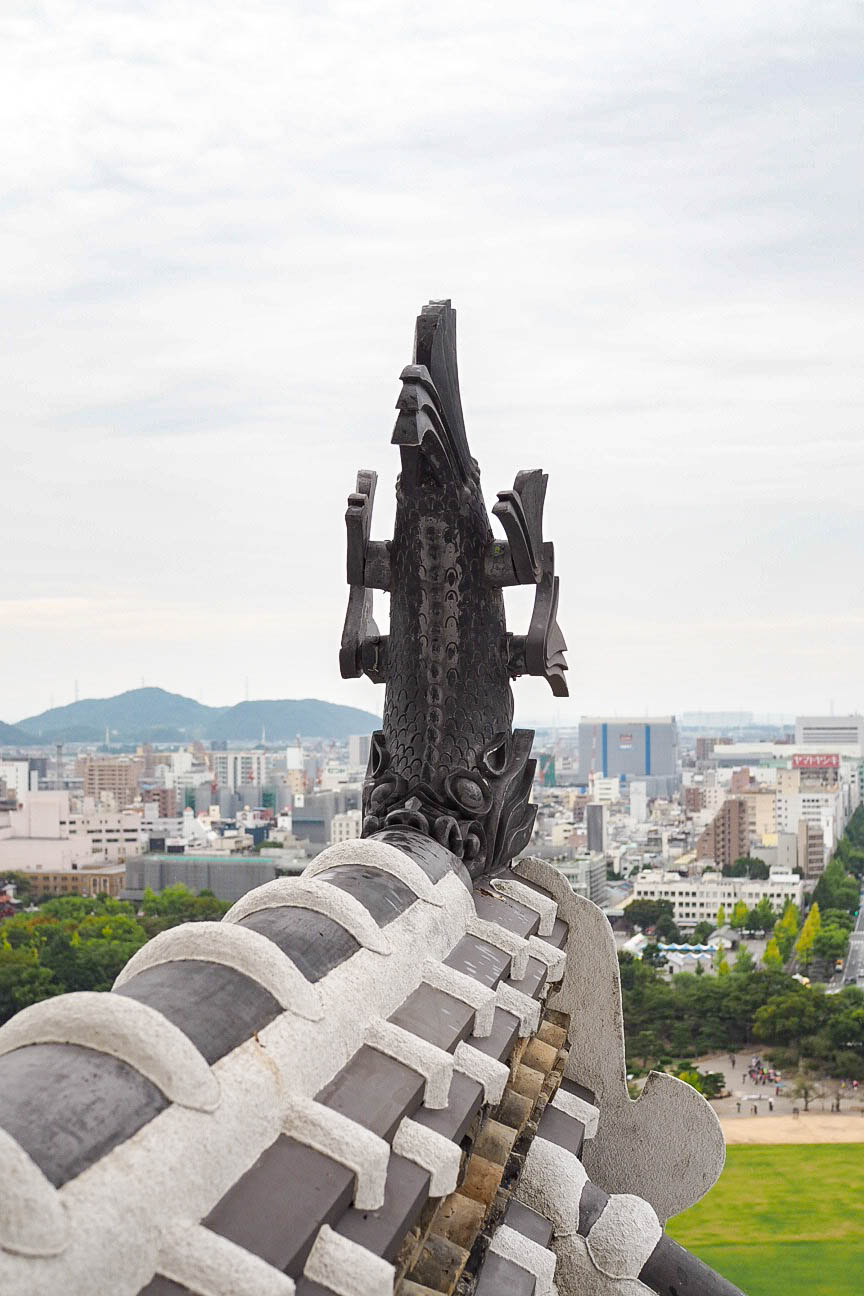 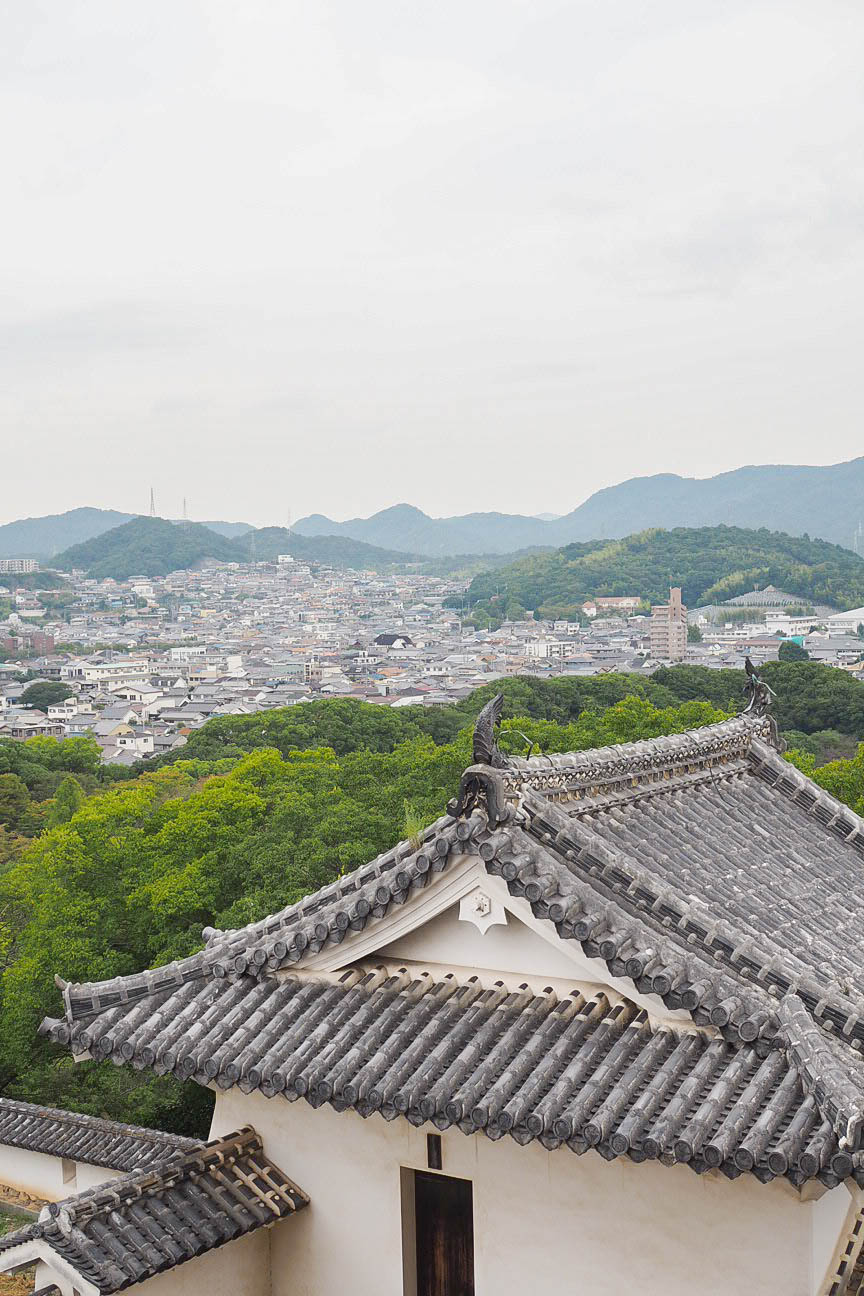 It was one of those experiences that I’m glad I got to do on my own. Embracing the peace away from the school groups and tourist buses, and being able to sit and just look up without talking to anyone allowed me to really take in the beauty of the castle. It was surreal as much as it felt familiar and it gave me my first glimpse of how stunning Japan really is. 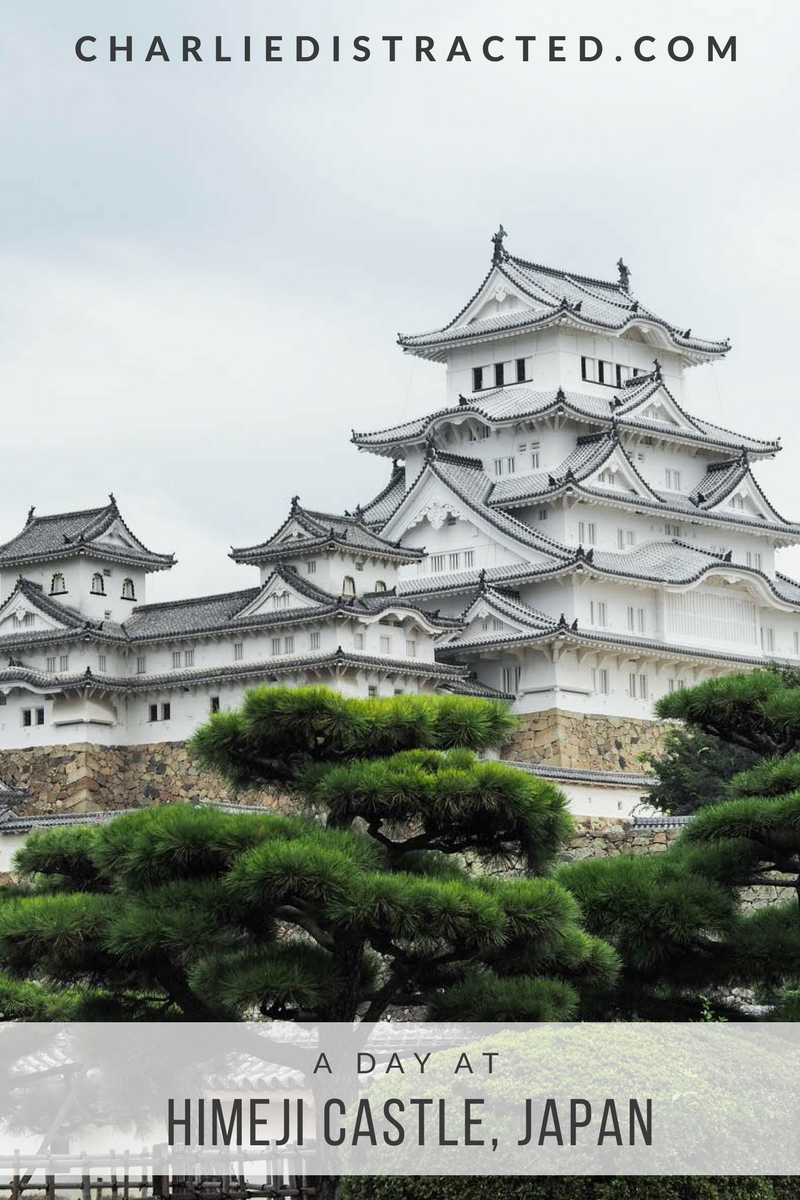