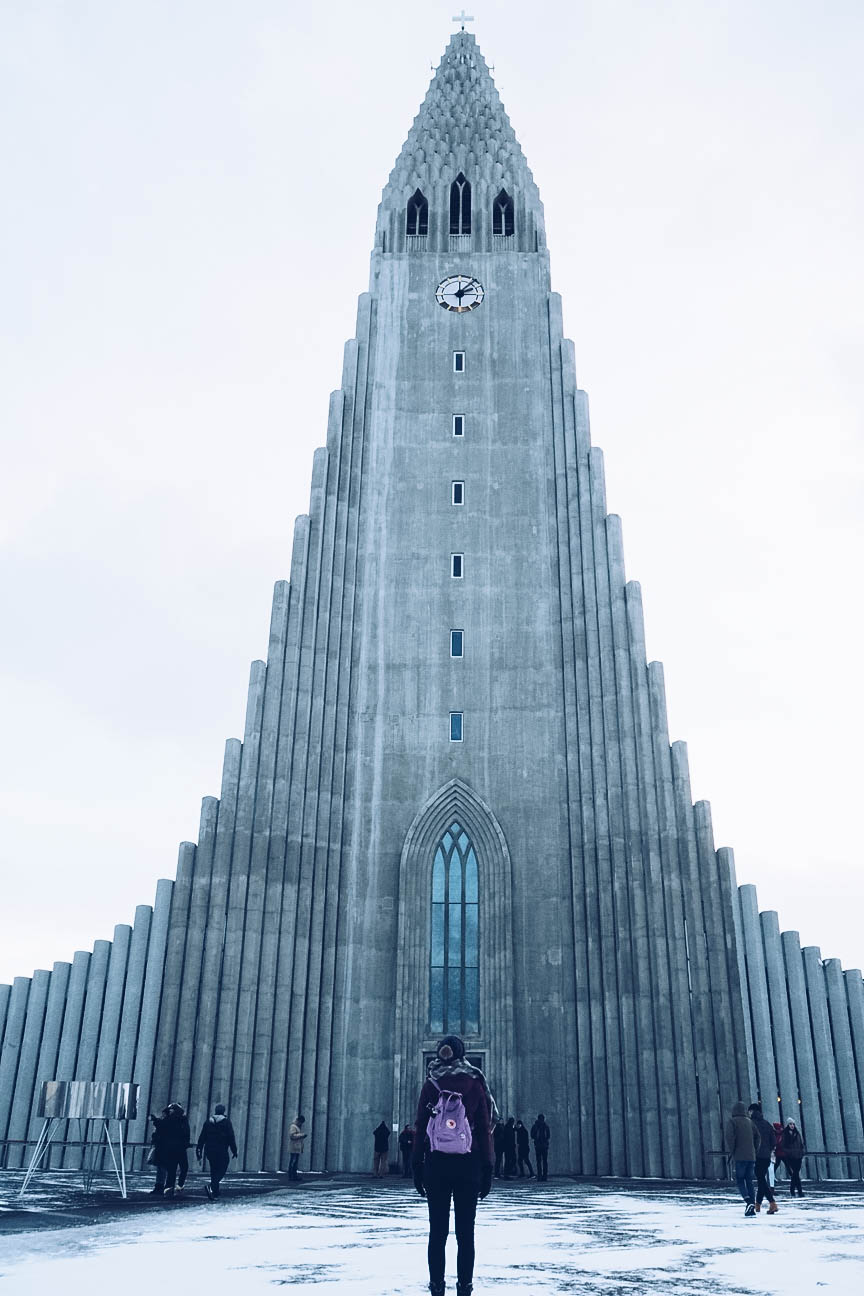 Something to be aware of immediately when planning a quick long weekend in Iceland, is the amount of sunlight you’ll be getting. If you’re travelling in winter to increase your chance of seeing the Northern Lights, you need to keep in mind that the sun doesn’t come up until around 10am and it starts setting again at around 3.30pm. This meant pretty meticulously planning out our time, but with Reykjavik being so small, it’s super easy to get around on foot and tick a lot off your list. 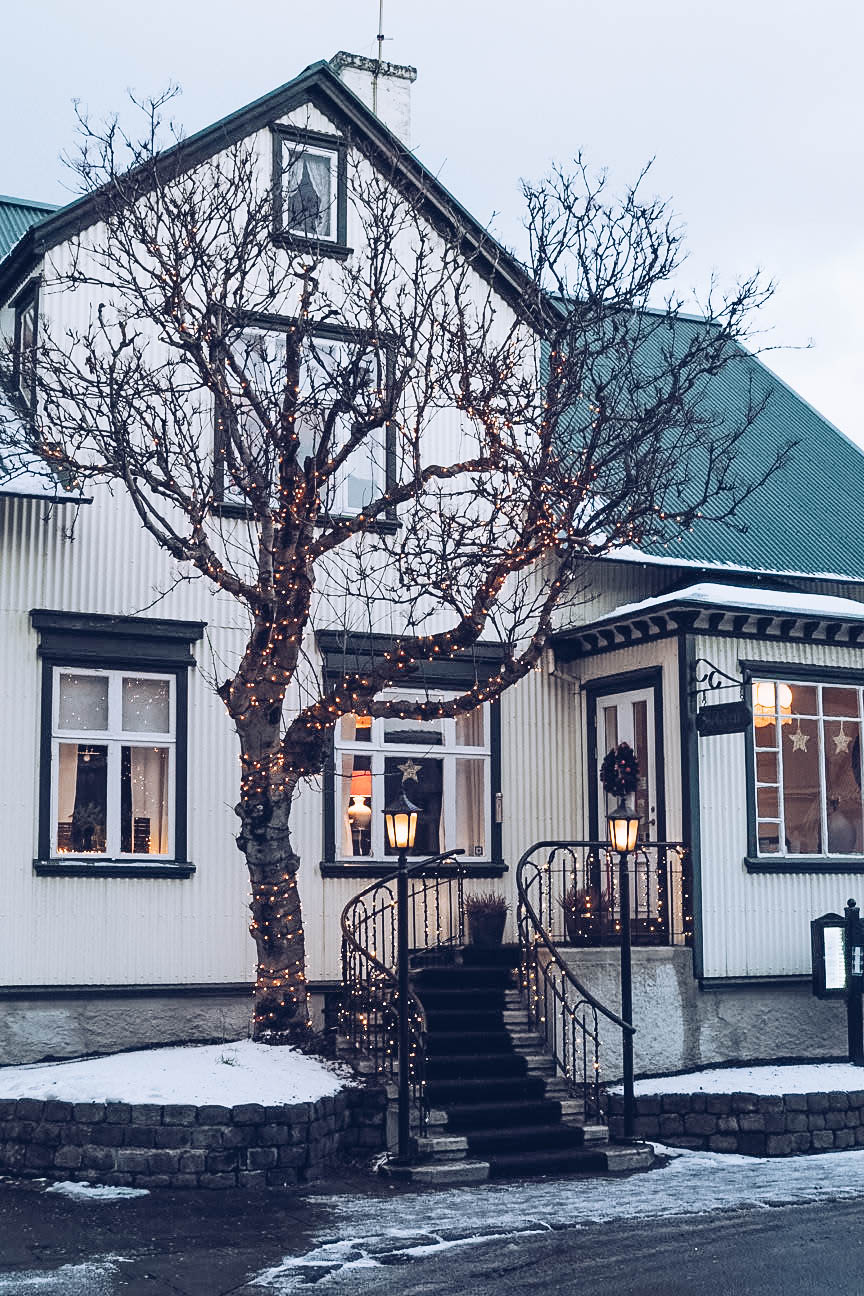 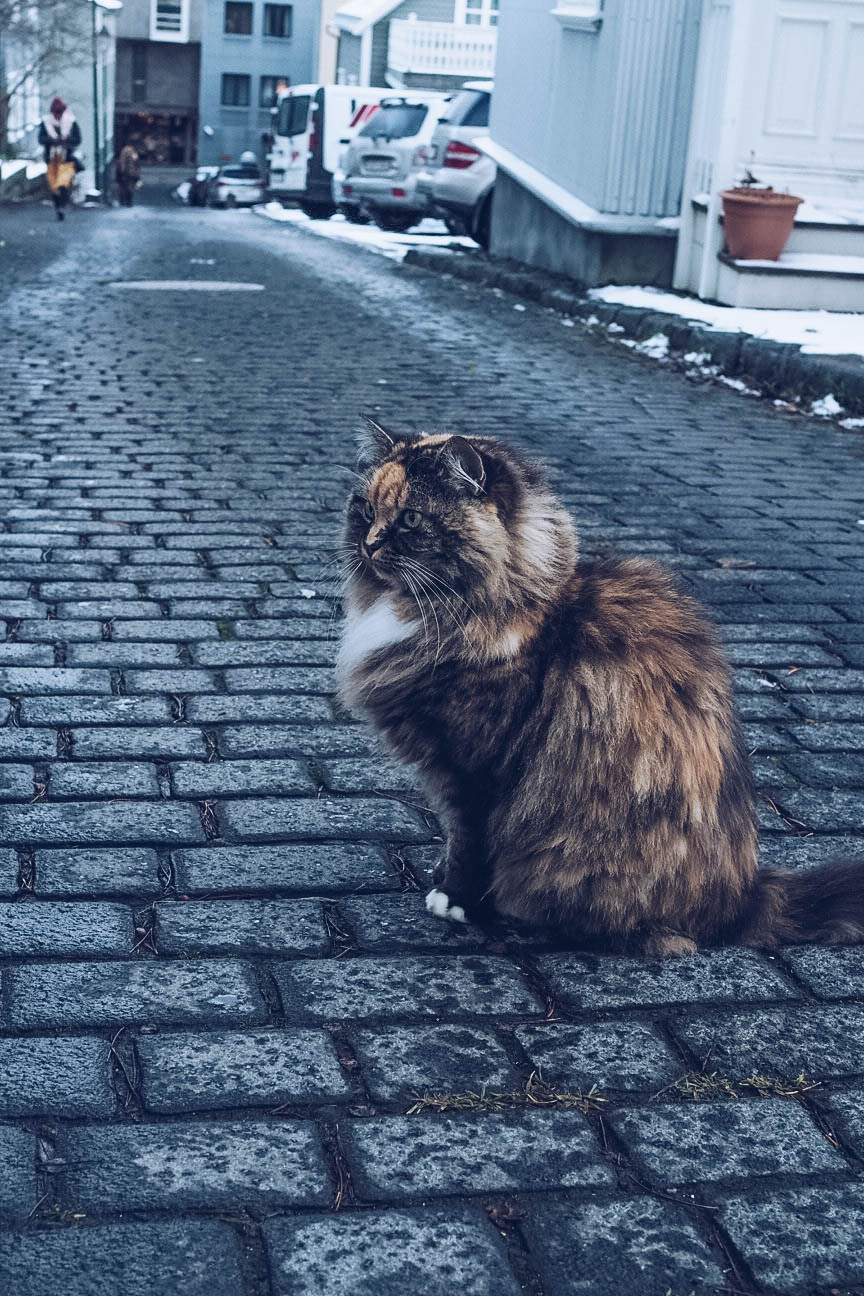 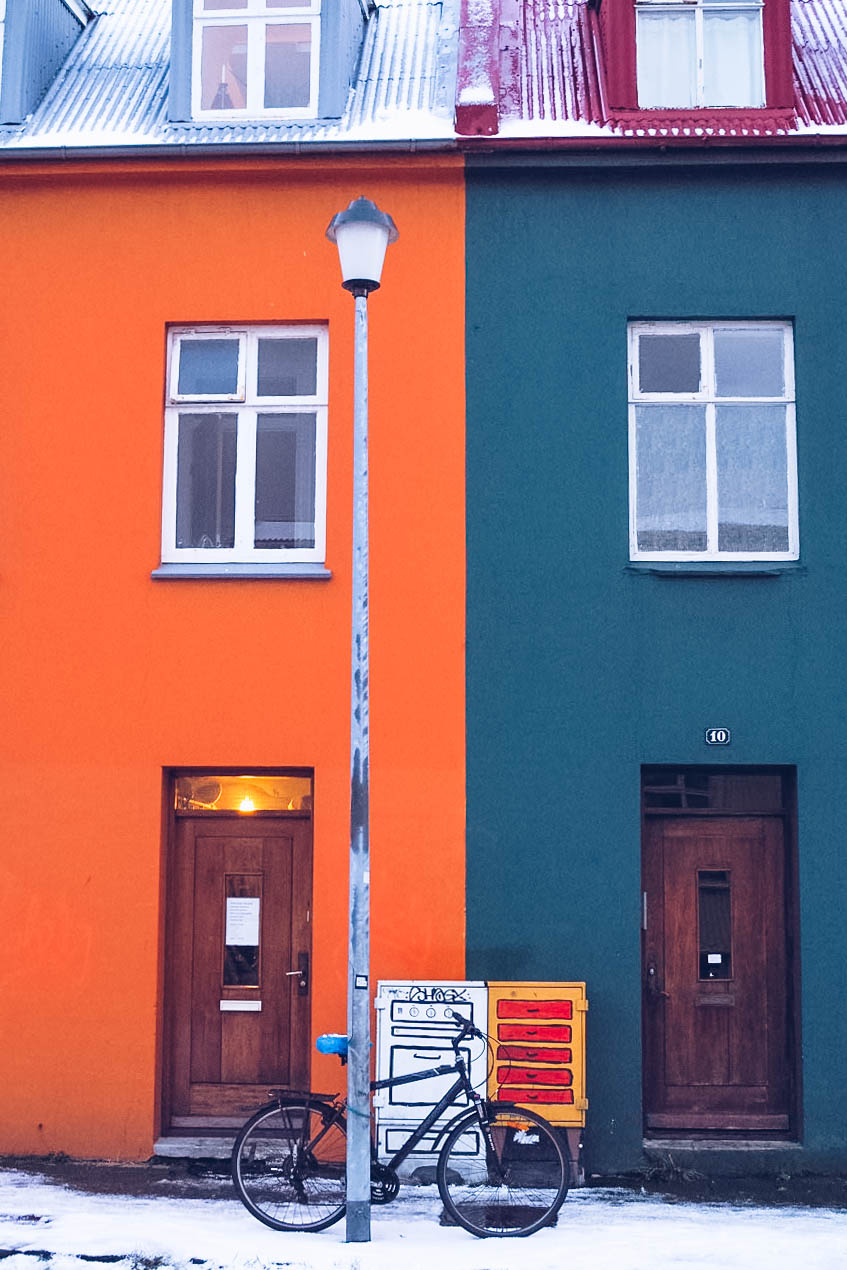 Here’s how I spent 24 hours in Reykjavik:

9am: Breakfast at The Grey Cat 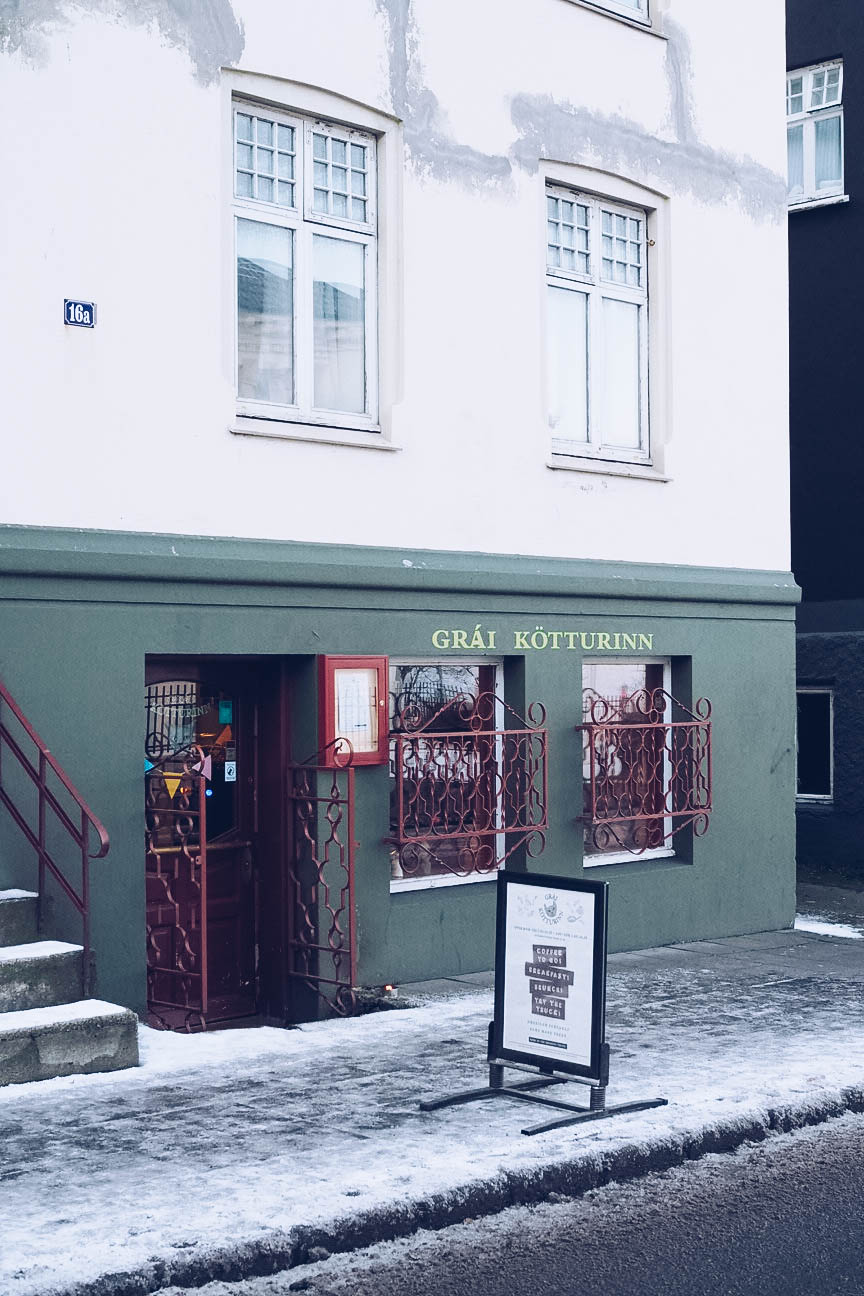 Shivering in low-to-freezing temperatures first thing in the morning, there’s not much that can persuade me to leave my hotel in the dark, but the promise of a hearty breakfast certainly can. The Grey Cat, or Grai Kotturinn, is a tiny little cafe that sits around 15 – 20 people and serves big, big portions. I ordered The Truck which consisted of plate-sized pancakes, doorstep toast, bacon, poached eggs, potatoes and tomatoes; somehow I ate the entire thing and it absolutely kept me running until well into the afternoon. 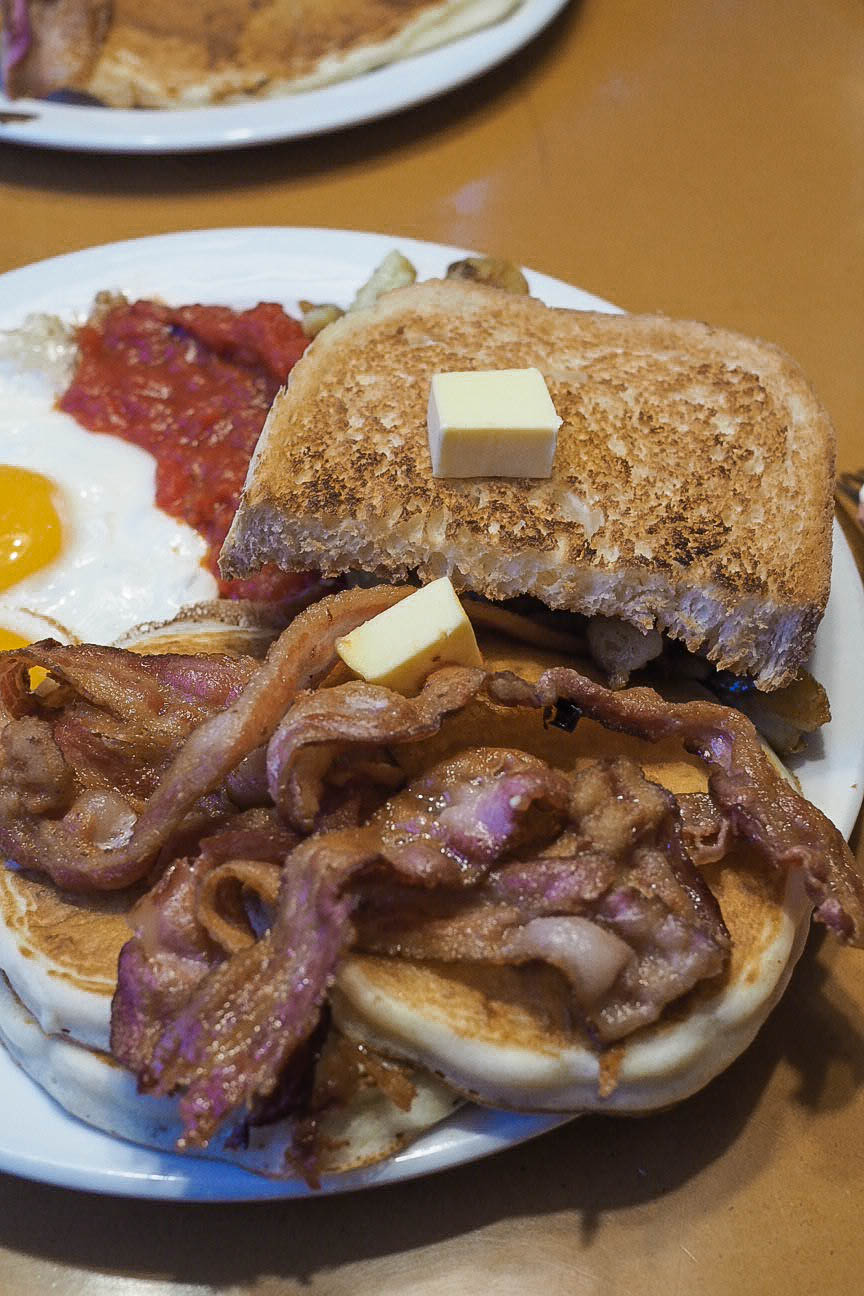 10am: Go to the top of Hallgrímskirkja 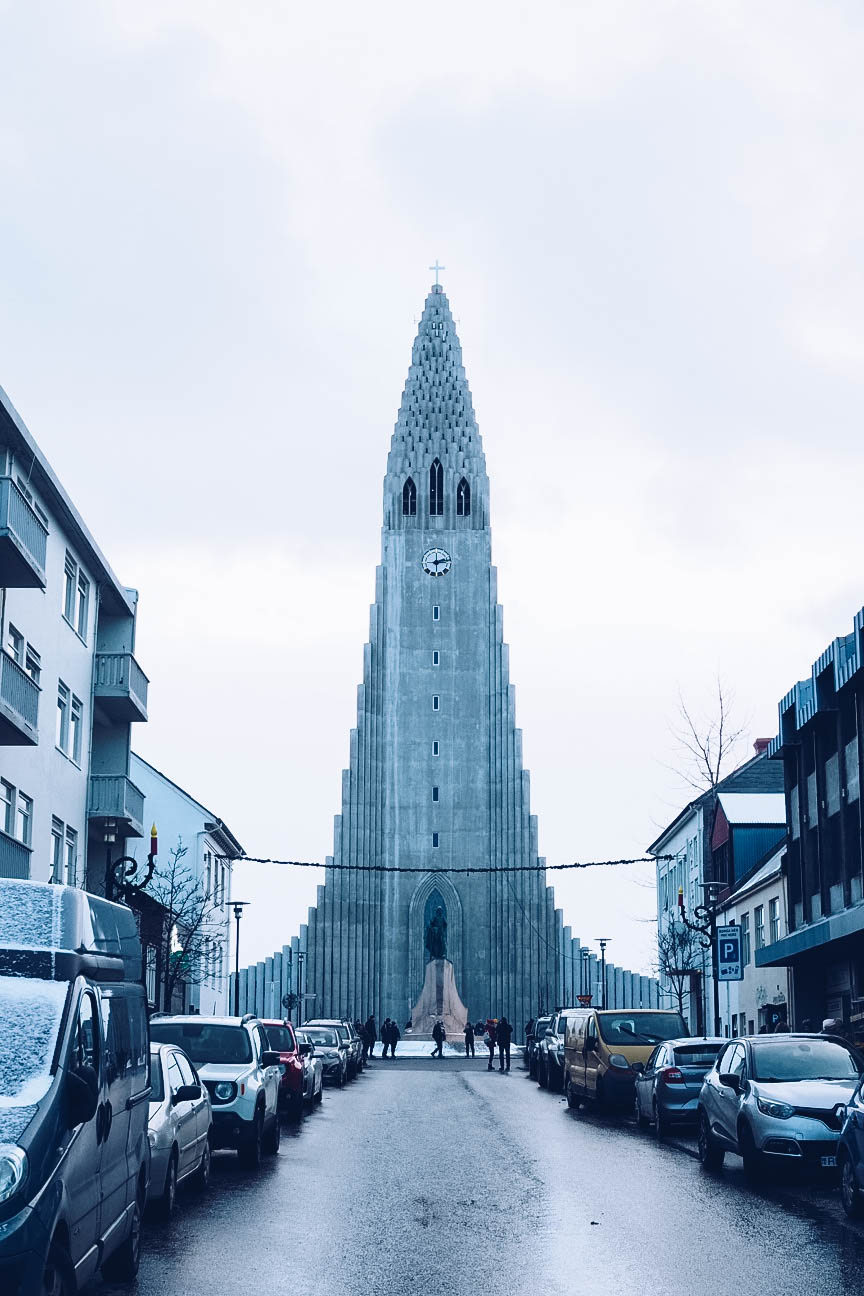 Hallgrímskirkja is the most iconic building in Reykjavik’s skyline, especially as the city is pretty low-rise anyway. It’s Gothic/Expressionist architecture is impressive enough from the outside (make sure you walk around the back as well as taking in the imposing front facade), but it’s best feature is the view from the top. The queue isn’t too bad and it’s not that expensive either, and taking in the colourful matchbox houses from the top is absolutely worth the minimal effort. 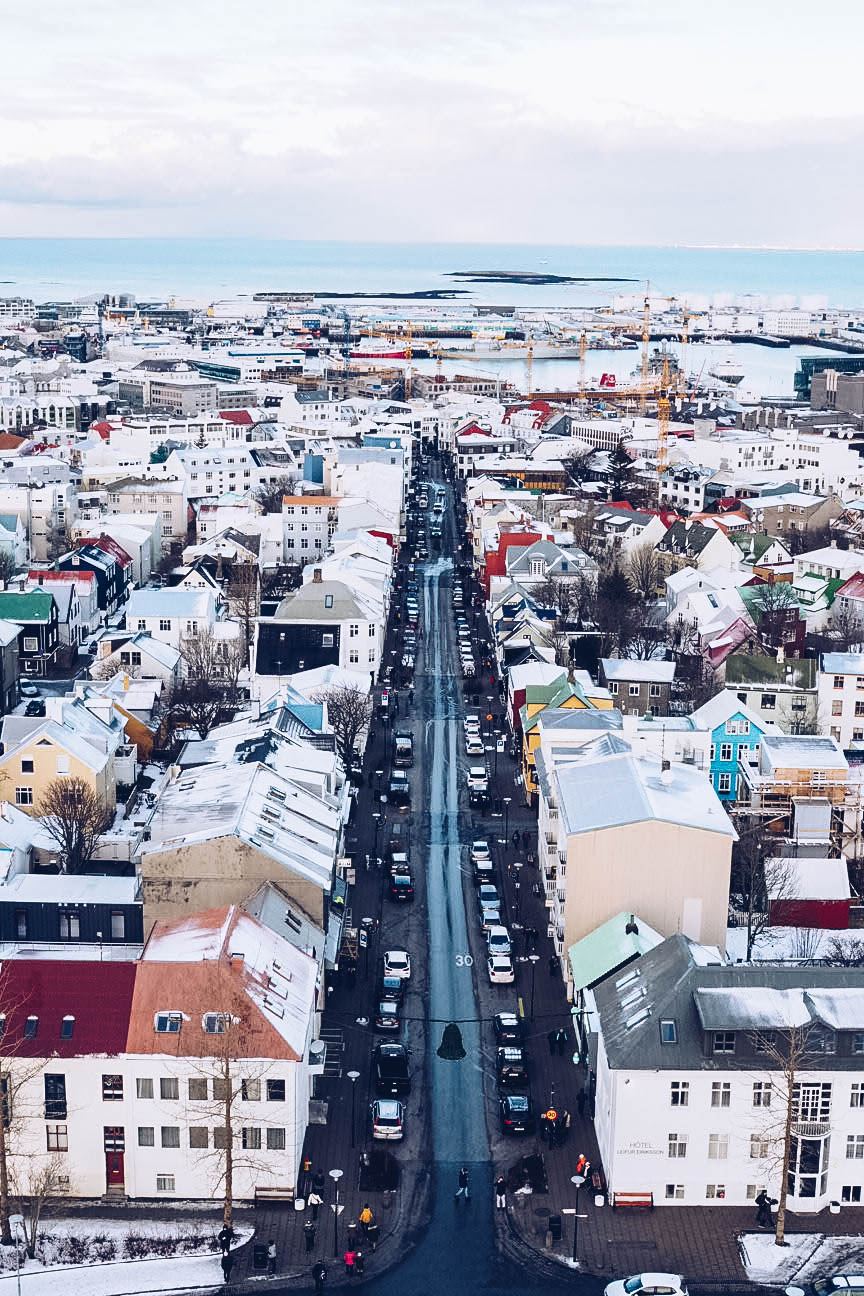 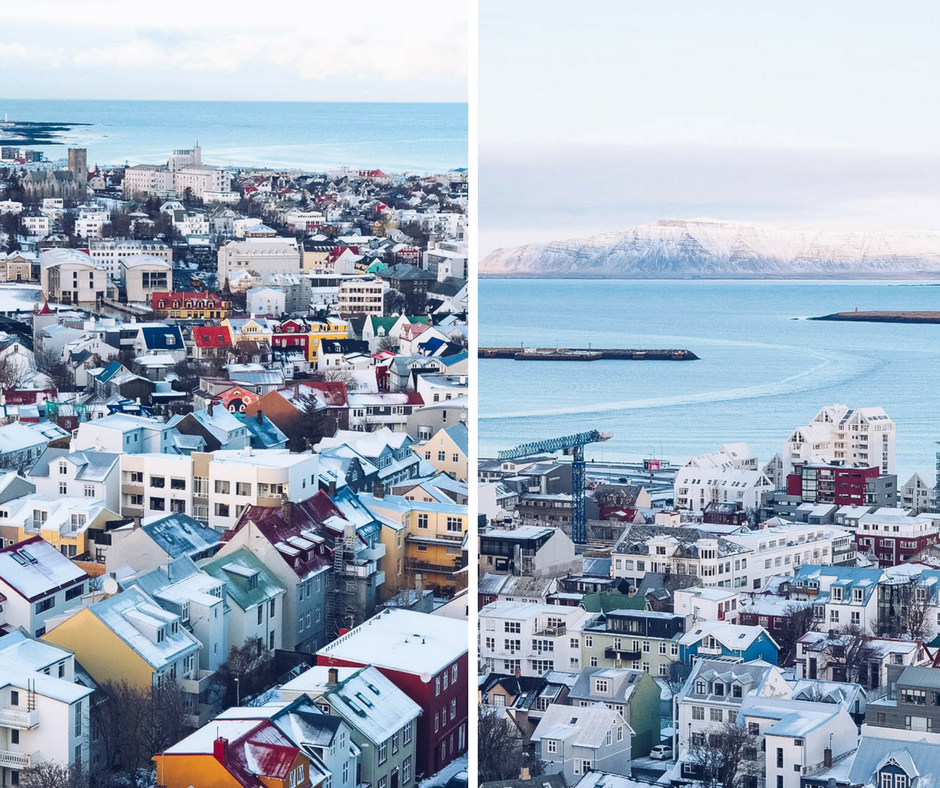 Find it at: Hallgrímskirkja, Hallgrímstorg 101, 101 Reykjavik

11am: Wander through the streets down to the harbour 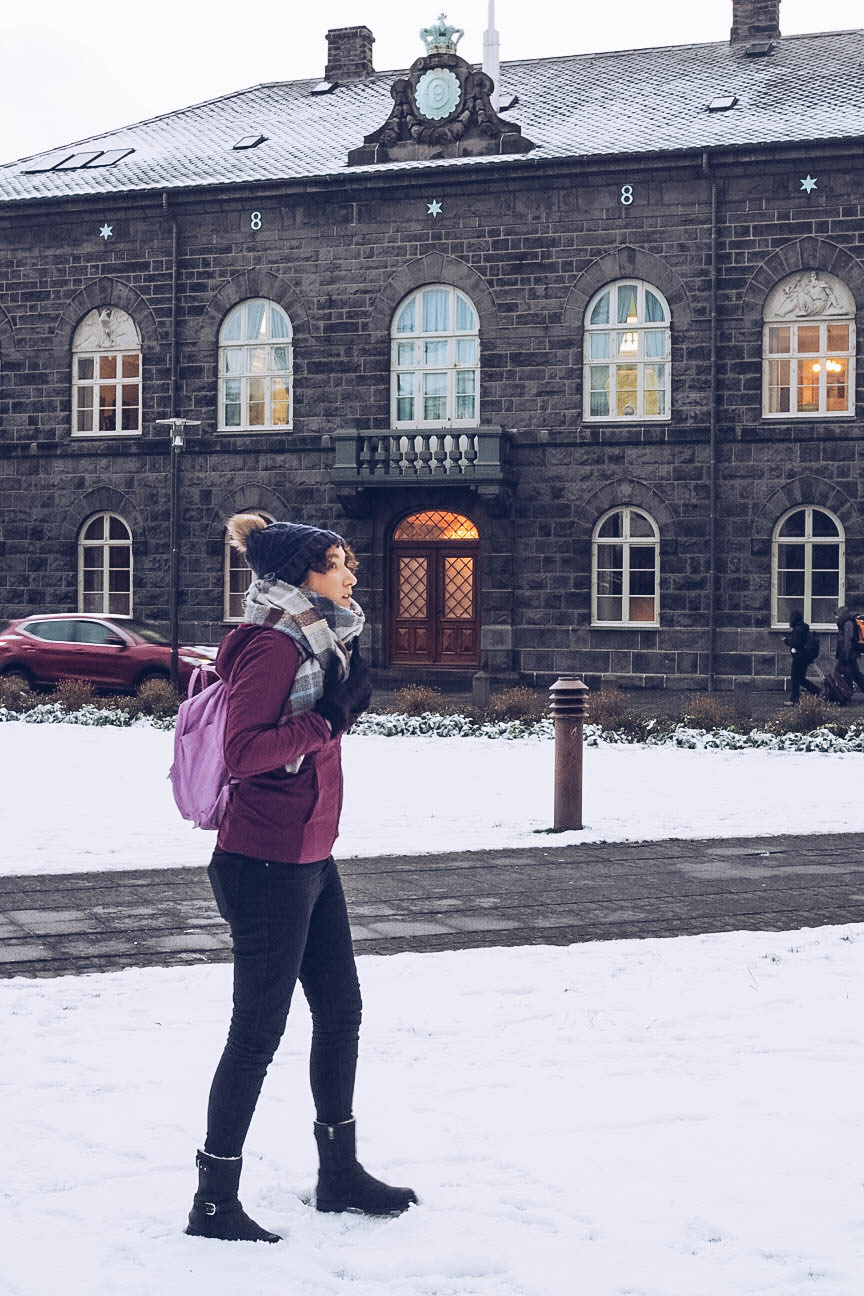 Reykjavik is an absolute pleasure to wander around, even in the snow flurries we experienced. Houses are straight out of a fairytale storybook, edged in primary colours and absolutely picture-perfect. There are huge murals hidden in plain sight, so keep your eyes open for flashes of colour down alleyways and around corners, but definitely take in the traditional architecture too. The Icelandic parliament, Alþingi sits right by the edge of Tjörnin Lake which was stunning in its half-frozen state. 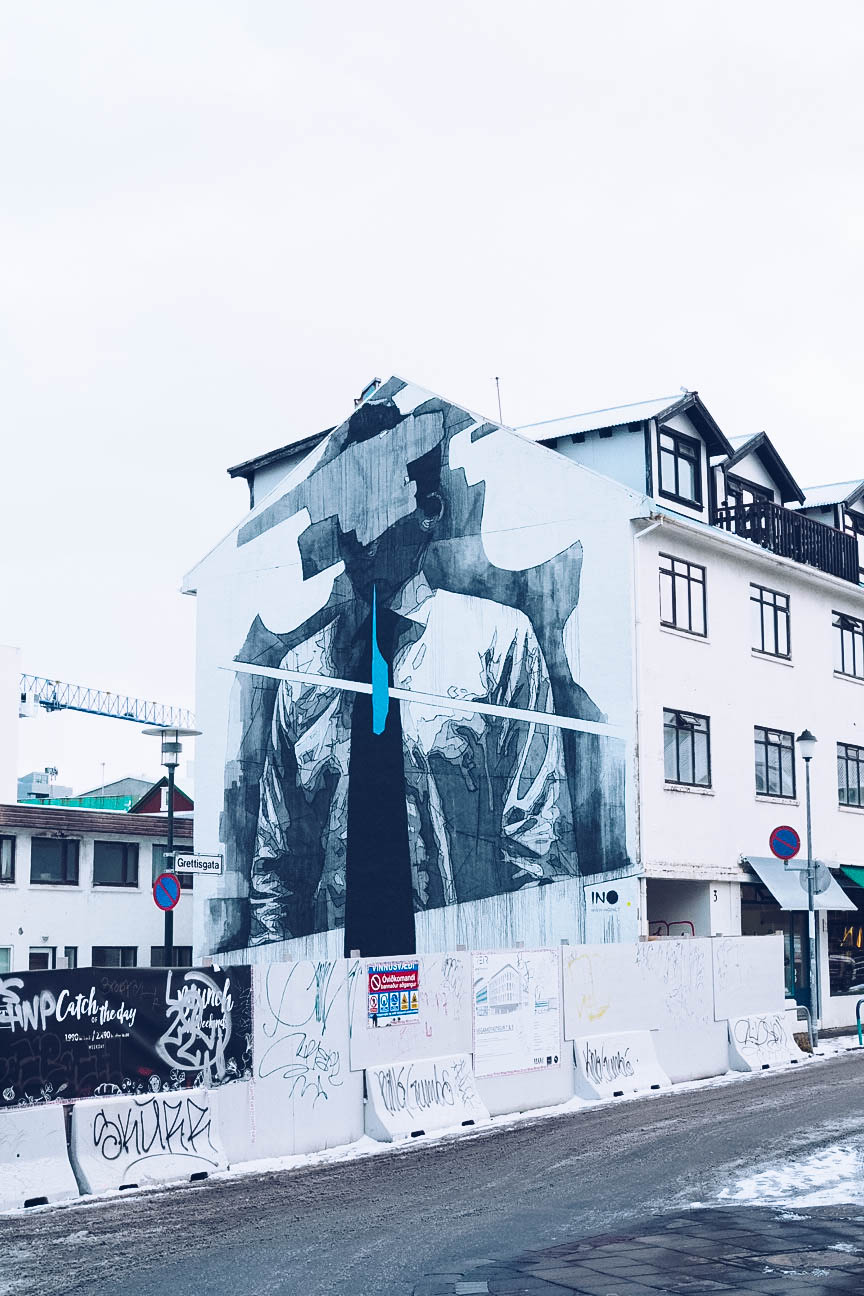 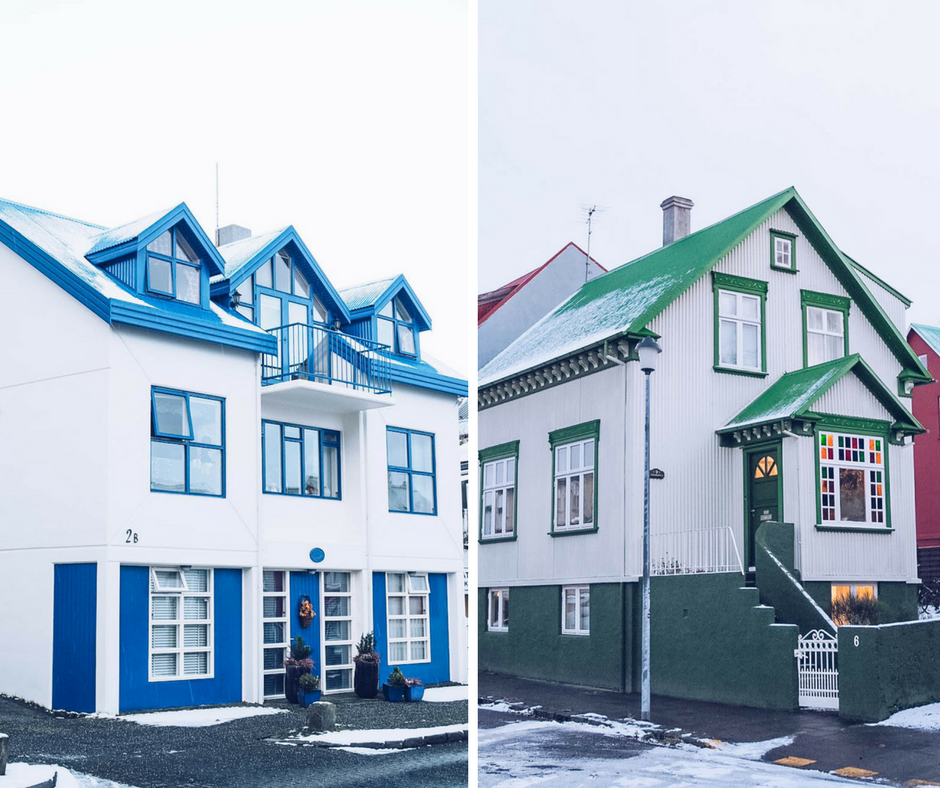 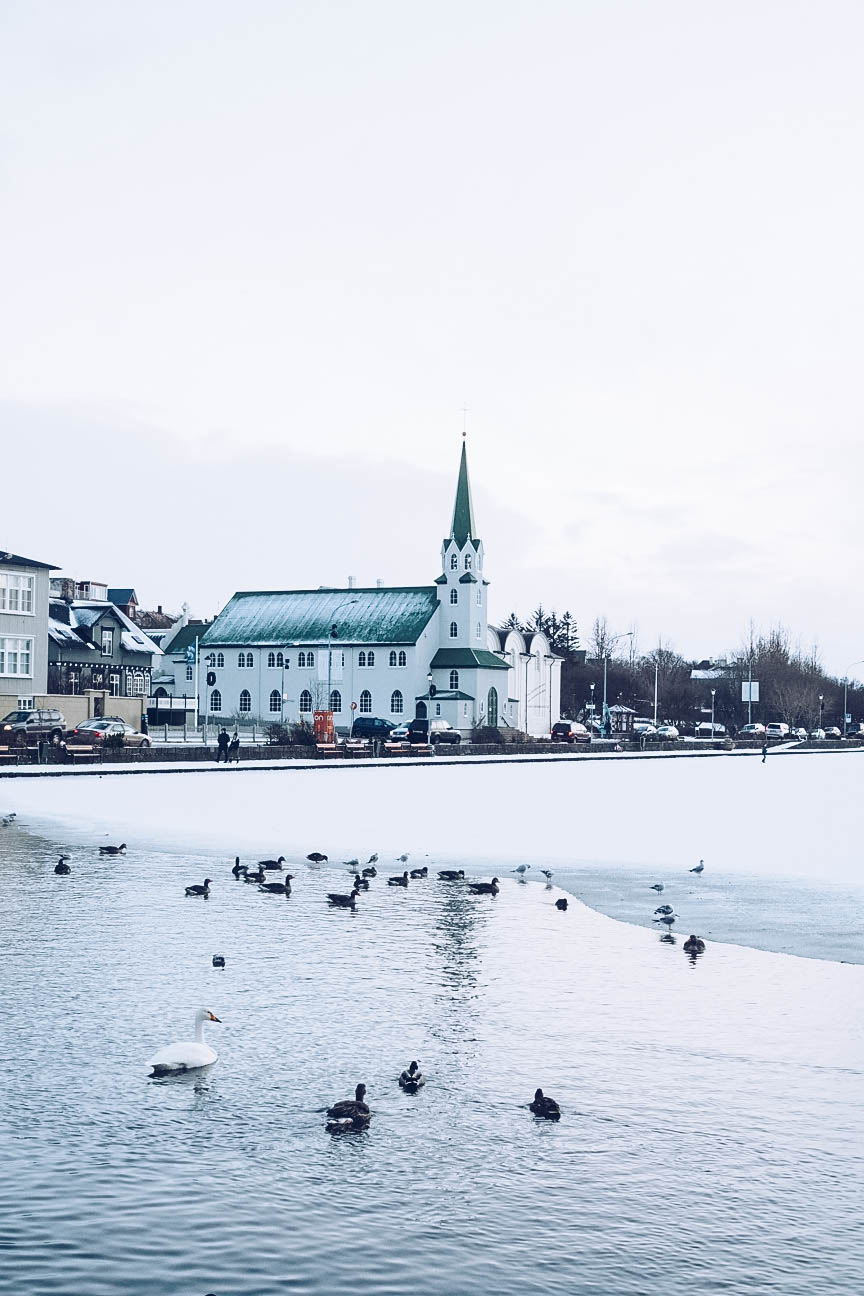 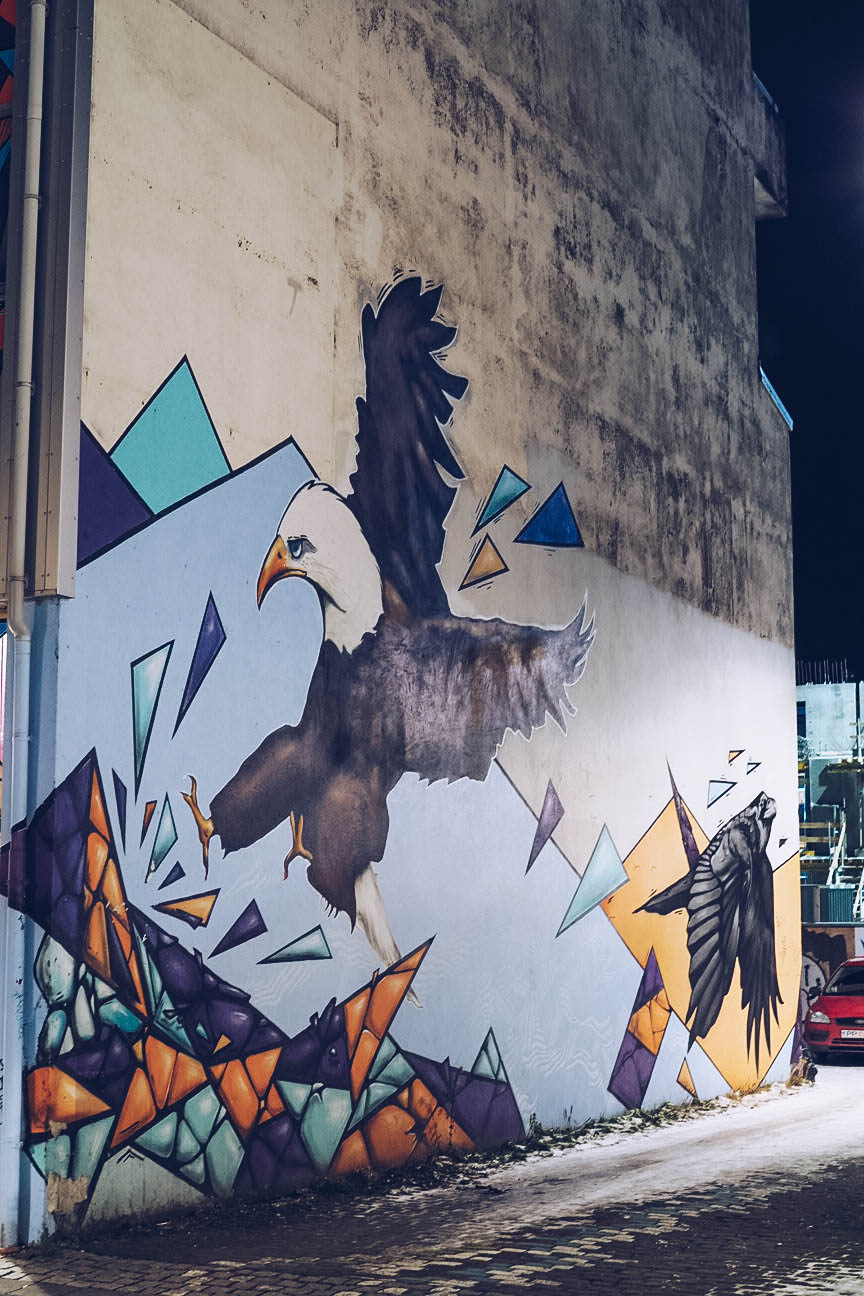 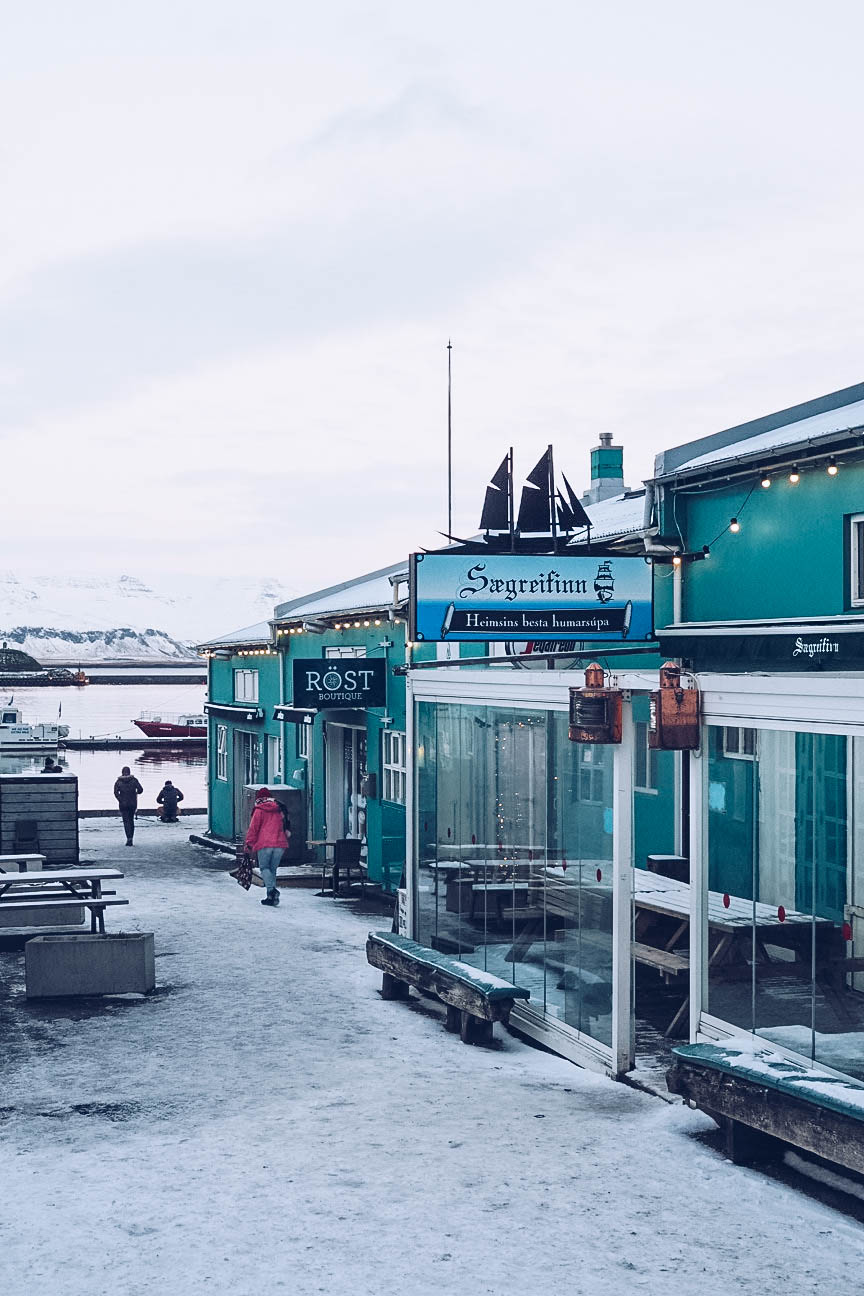 Right on the water’s edge is another tiny eatery, Sægreifinn, or Sea Baron, a simple stop-off for traditional lobster soup. The seafood in Iceland is beautiful thanks to such clear and clean waters surrounding the island, and I was more than satisfied with our quick lunch break here. I didn’t need a huge portion of food after my mammoth breakfast, so this was more than enough, and it was creamy, buttery with a good dash of cracked black pepper to give it a kick. I dunked crunchy bread in with greedy scoops and was completely warmed through. 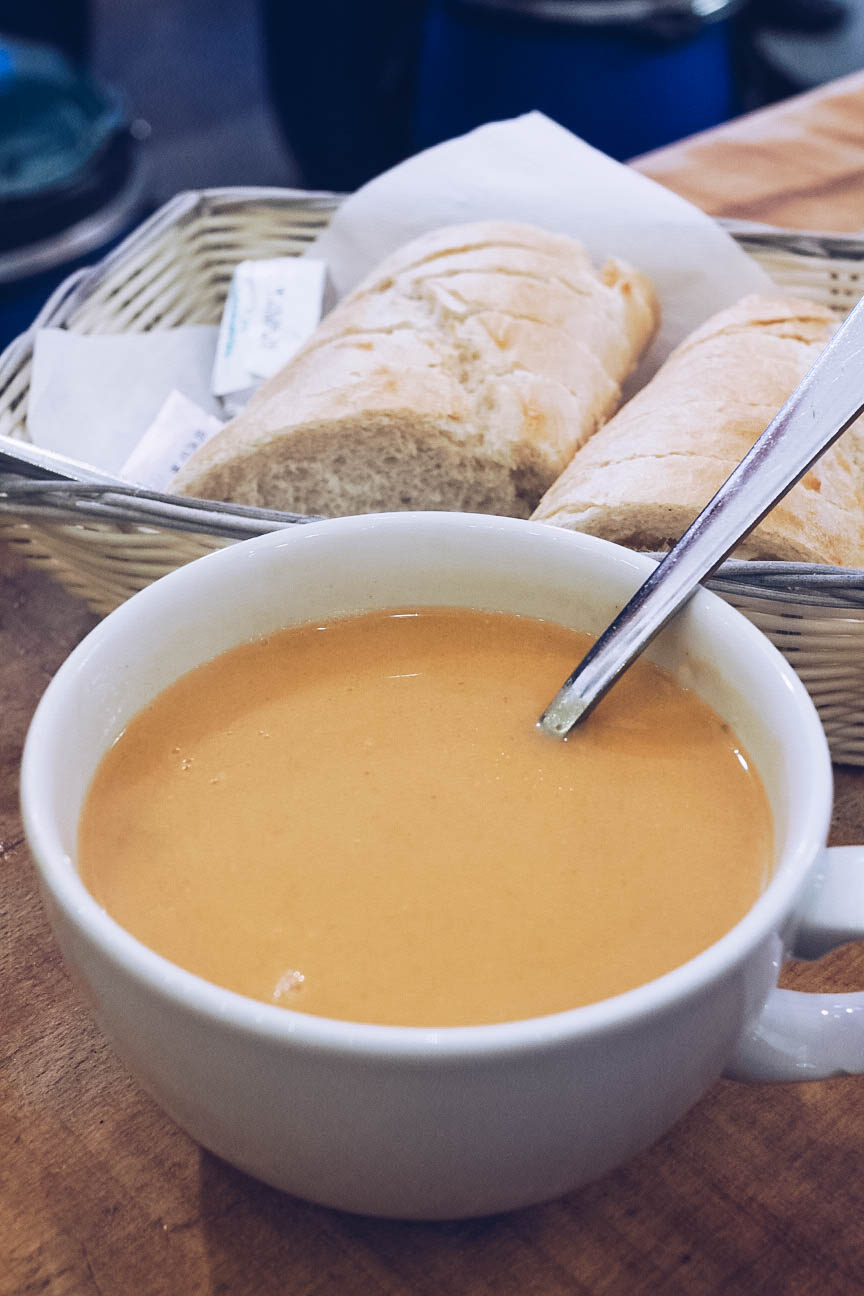 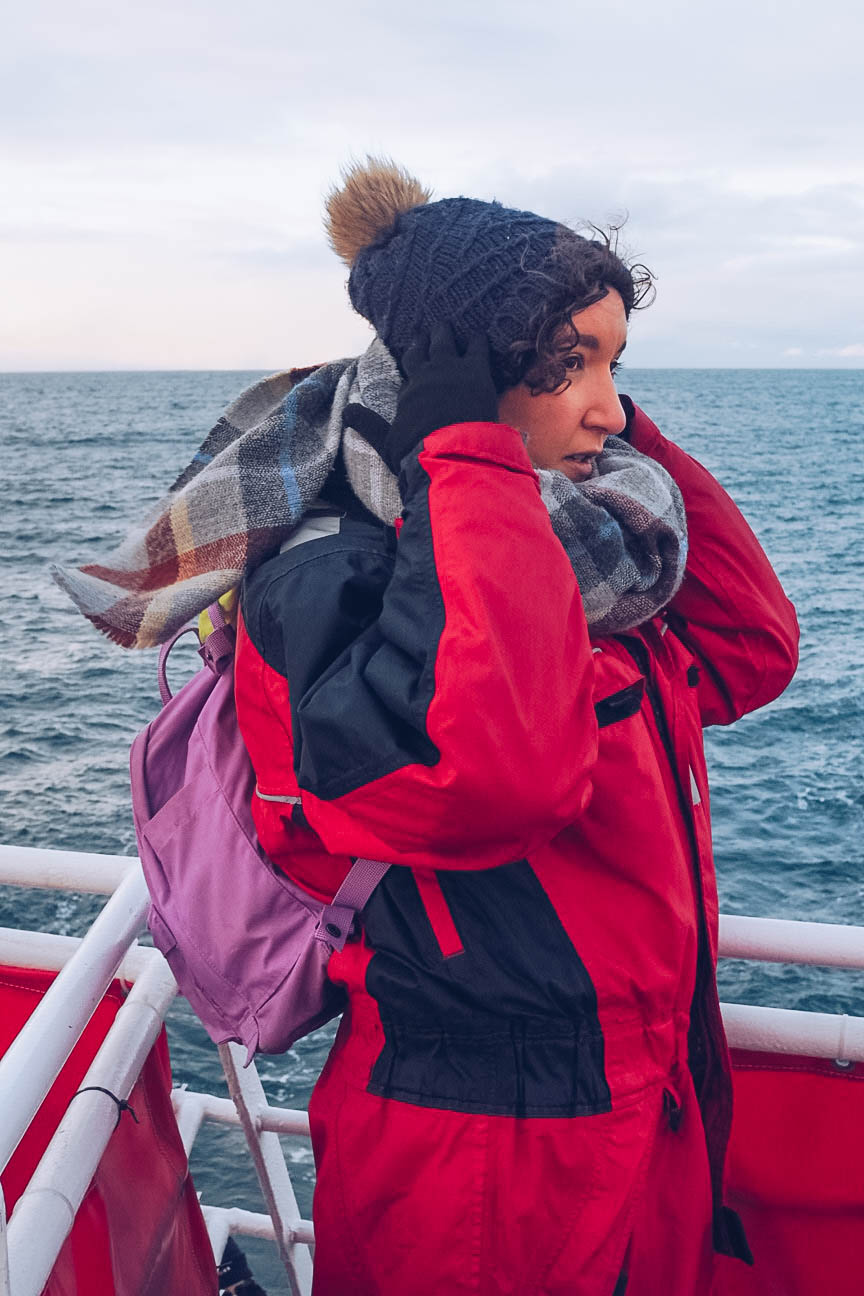 Reykjavik is blessed with a beautiful coastline and the whole of Iceland is surrounded by some incredible wildlife. We’d missed the time of year to see puffins, but there was the opportunity to potentially see whales and dolphins, so we set sail on an afternoon tour with Elding Whale*. We were given full-body warm suits which went over the multiple layers we were already wearing and allowed us to stand outside on the boat for the three-hour duration of the tour. Although we didn’t see any whales, we were treated to multiple visits from excitable dolphins who swam alongside and around us for the majority of our trip. Our guide was knowledgable and excitable, and it was an absolute pleasure for this land-lover with very wobbly sea legs! 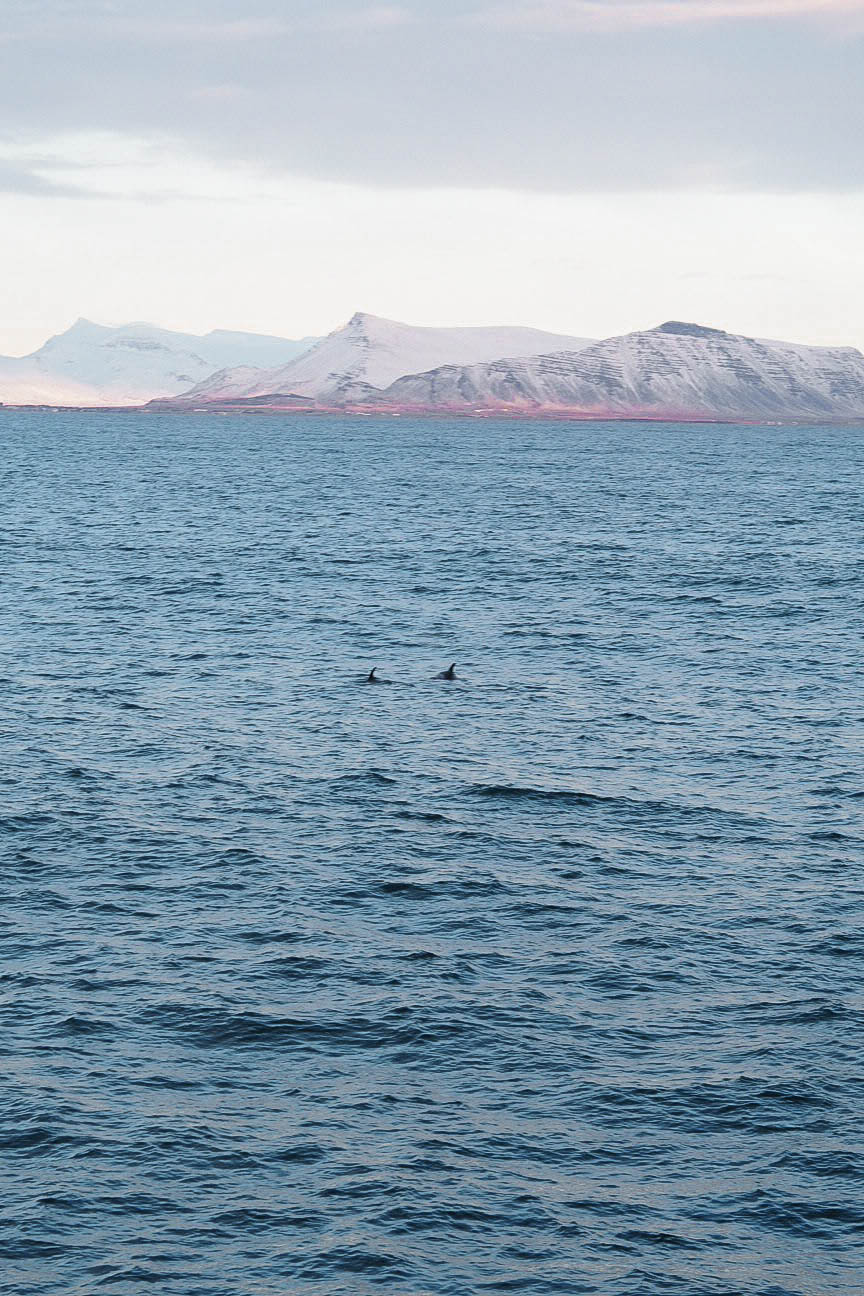 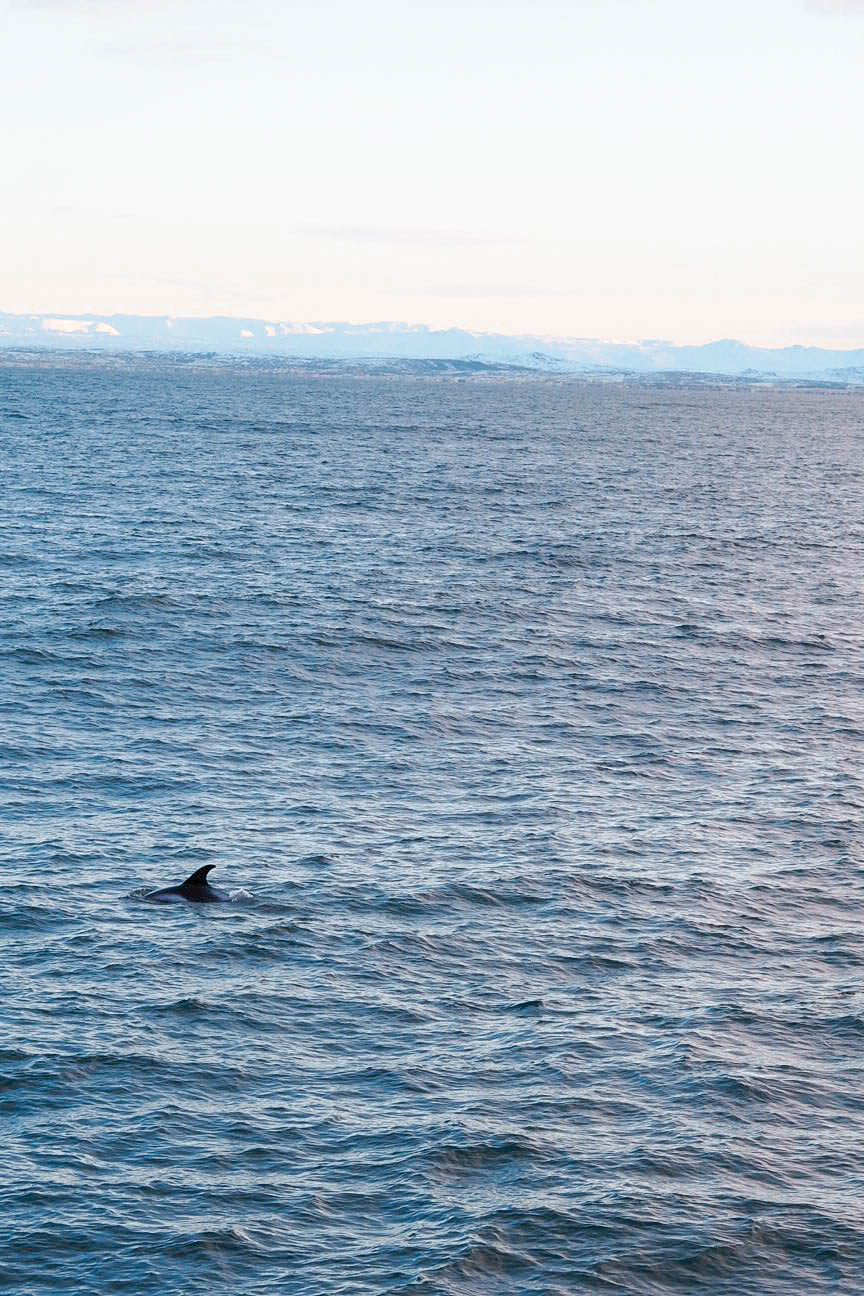 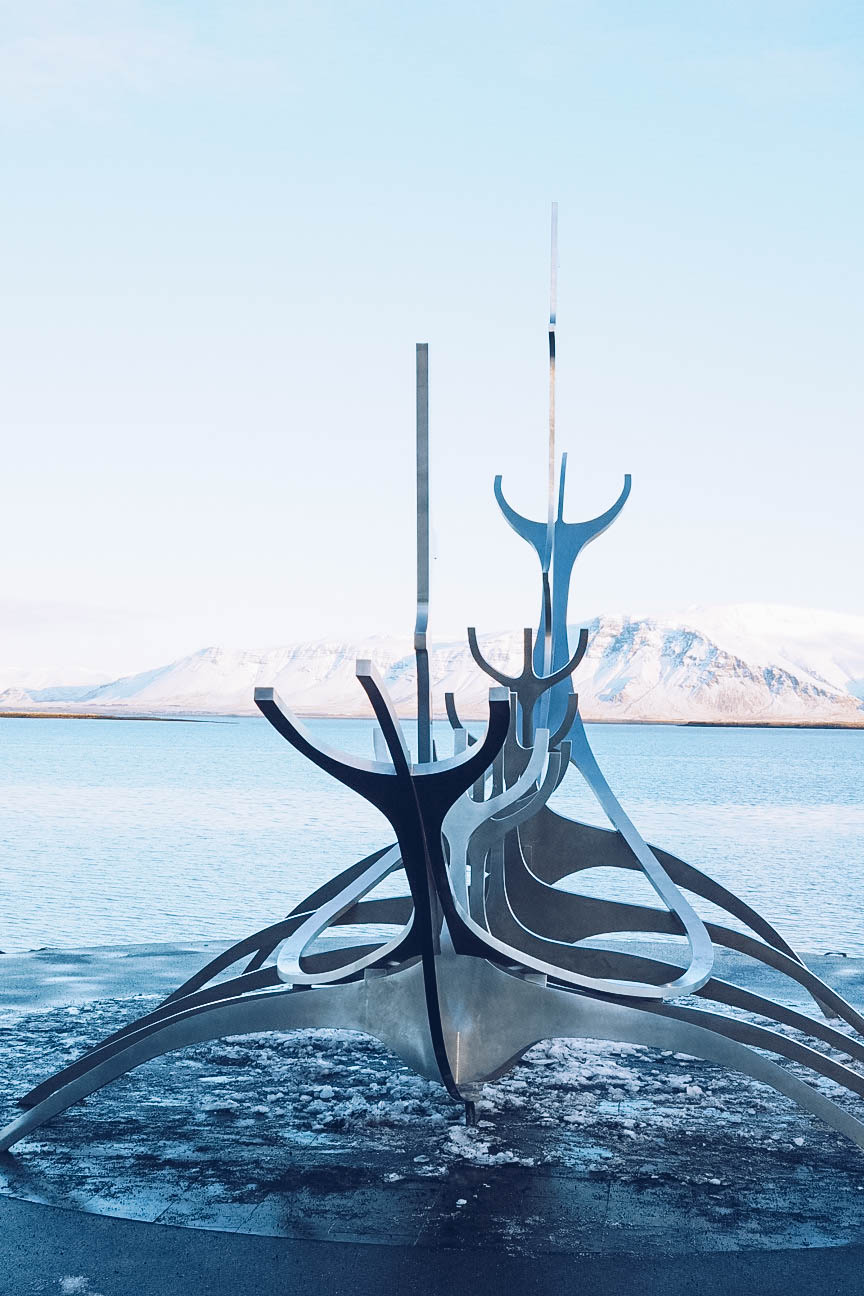 Easily the most famous sculpture in Iceland, The Sun Voyager overlooks the water on the northern edge of the central part of the city, close to the beautiful Harpa Concert Hall. It’s supposed to represent a boat floating towards undiscovered territory full of hope and freedom, and although I’m not a great art aficionado, it did look beautiful as the sun set. 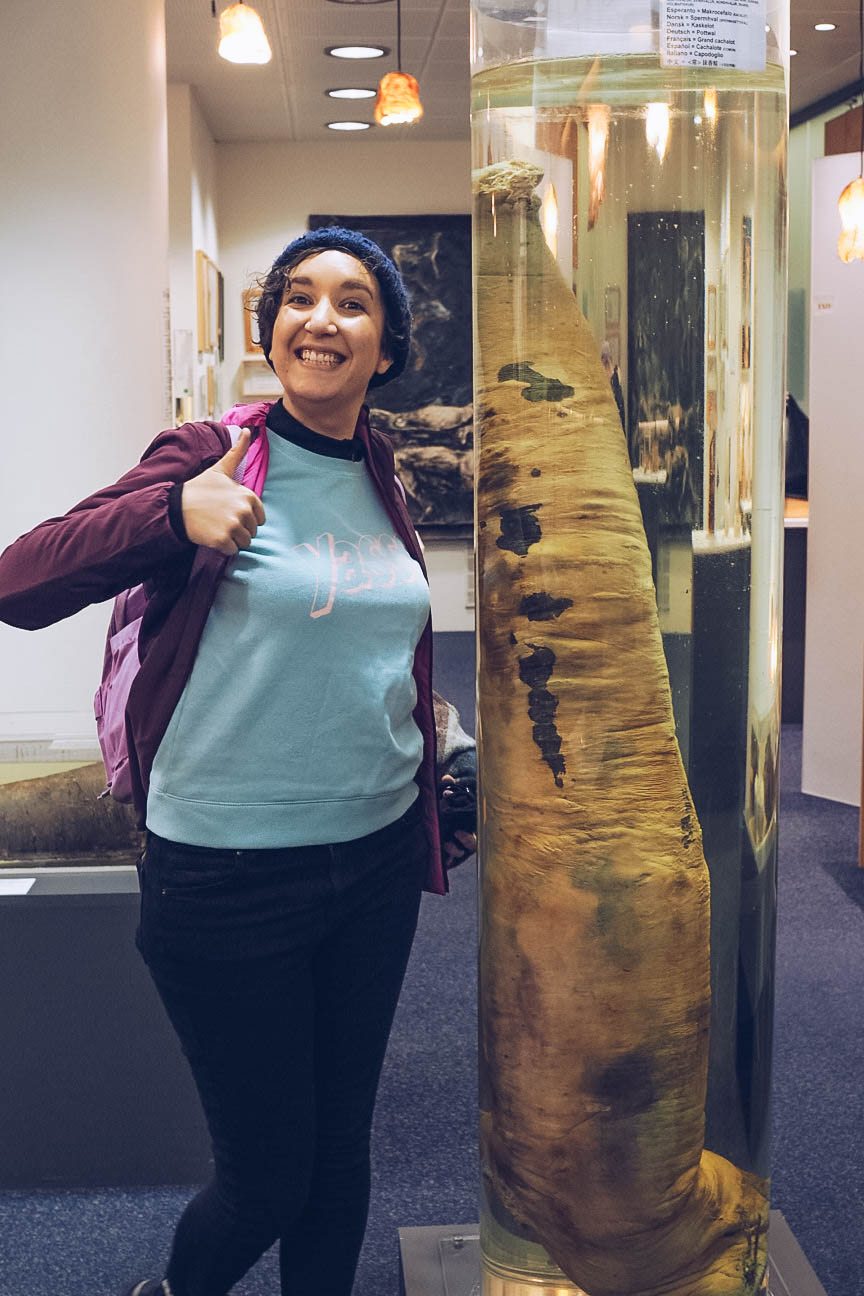 In simple terms, the Icelandic Phallological Museum is the world’s largest collection of penises. That’s right, it’s a building full of actual cocks, from a tiny hamster peen to a terrifyingly large sperm whale member. They’re all pickled and put in jars and tubes of all sizes and placed on shelves for bemused viewing, the place isn’t exactly an in-depth educational establishment but my god it is hilarious. Show me somewhere that will allow me to make inappropriate genital jokes for a solid 45 minutes and then buy a shot glass with a dick on it, and I consider that worth the airfare. 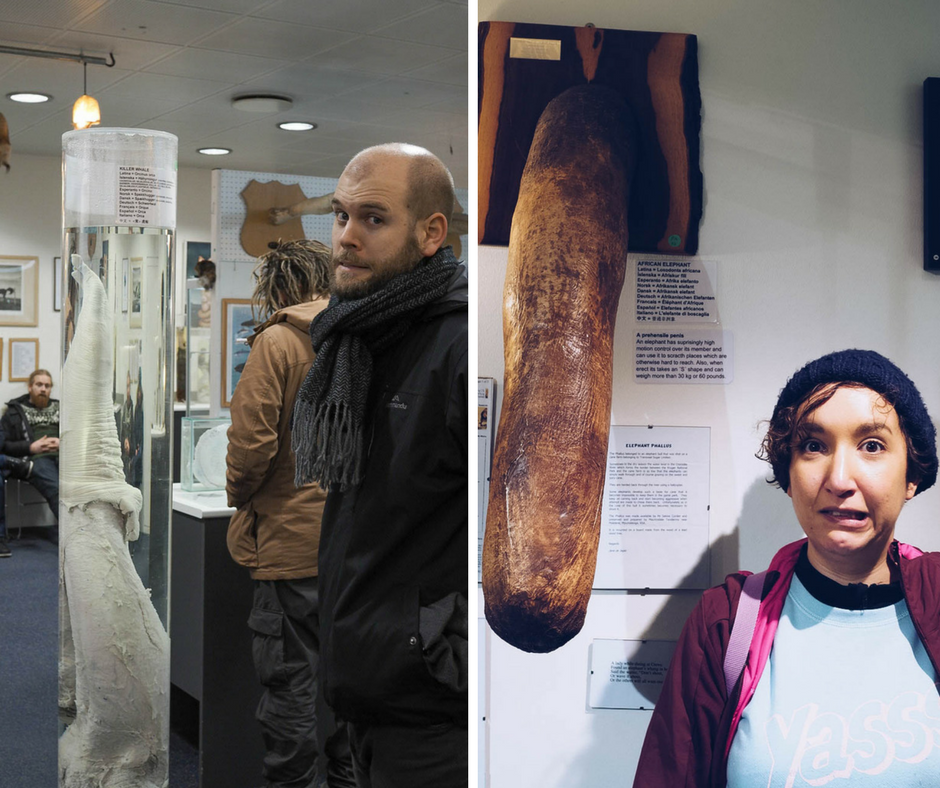 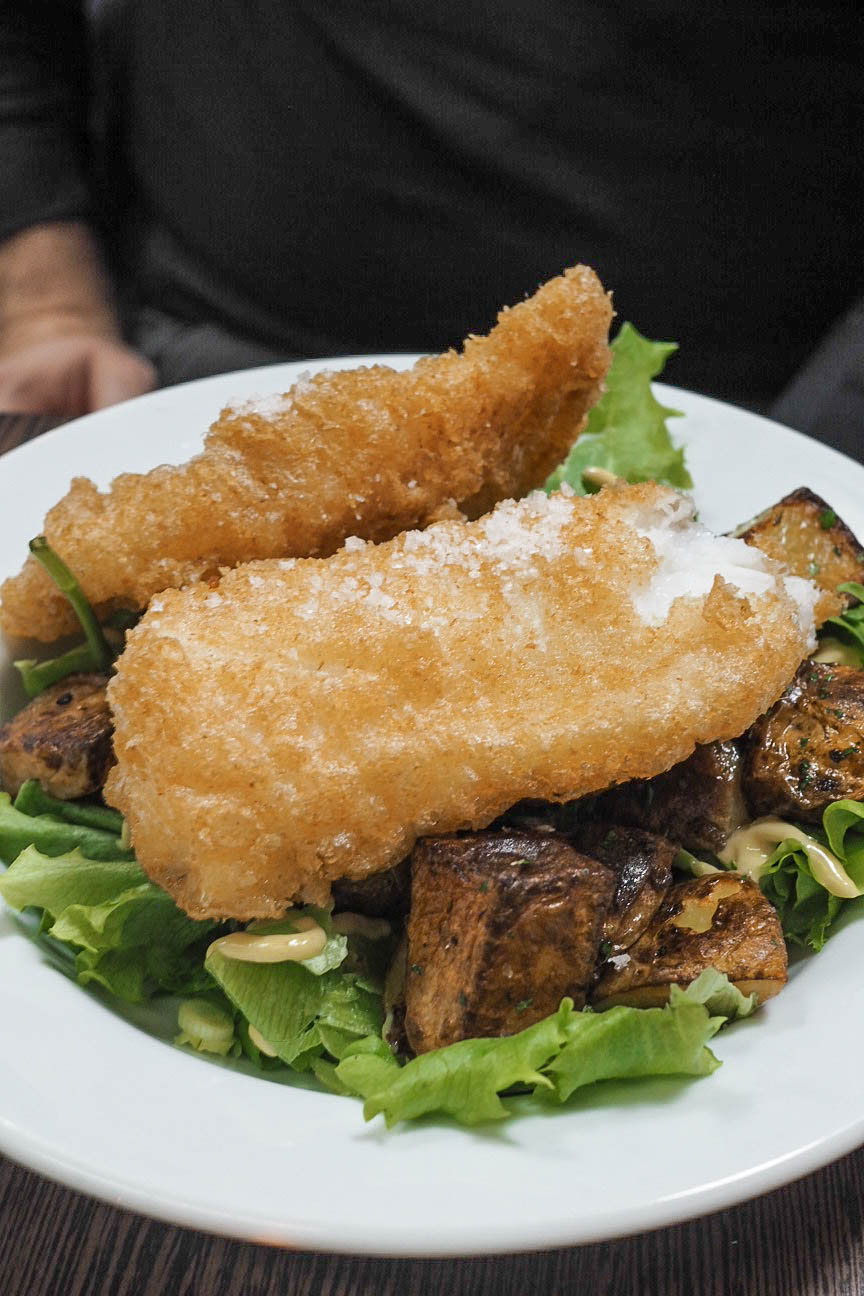 Self-explanatory restaurant names can be massively hit or miss: Where the Pancakes Are = big ol’ yes; Burger and Lobster = nope nope nope. Icelandic Fish & Chips firmly falls in the ‘hit’ category and is conjoined with a small museum on volcanoes which is adorable. The food is super simple and incredibly good; you pick your fish (I went for cod), it’s coated in a light, flaky batter and served with roast potatoes and a green salad. Their signature condiment is Skyrronaise, which is essentially mayonnaise made with the Icelandic’s favourite yoghurt, Skyr which we had mixed with honey and mustard and I came away determined to recreate it at home! 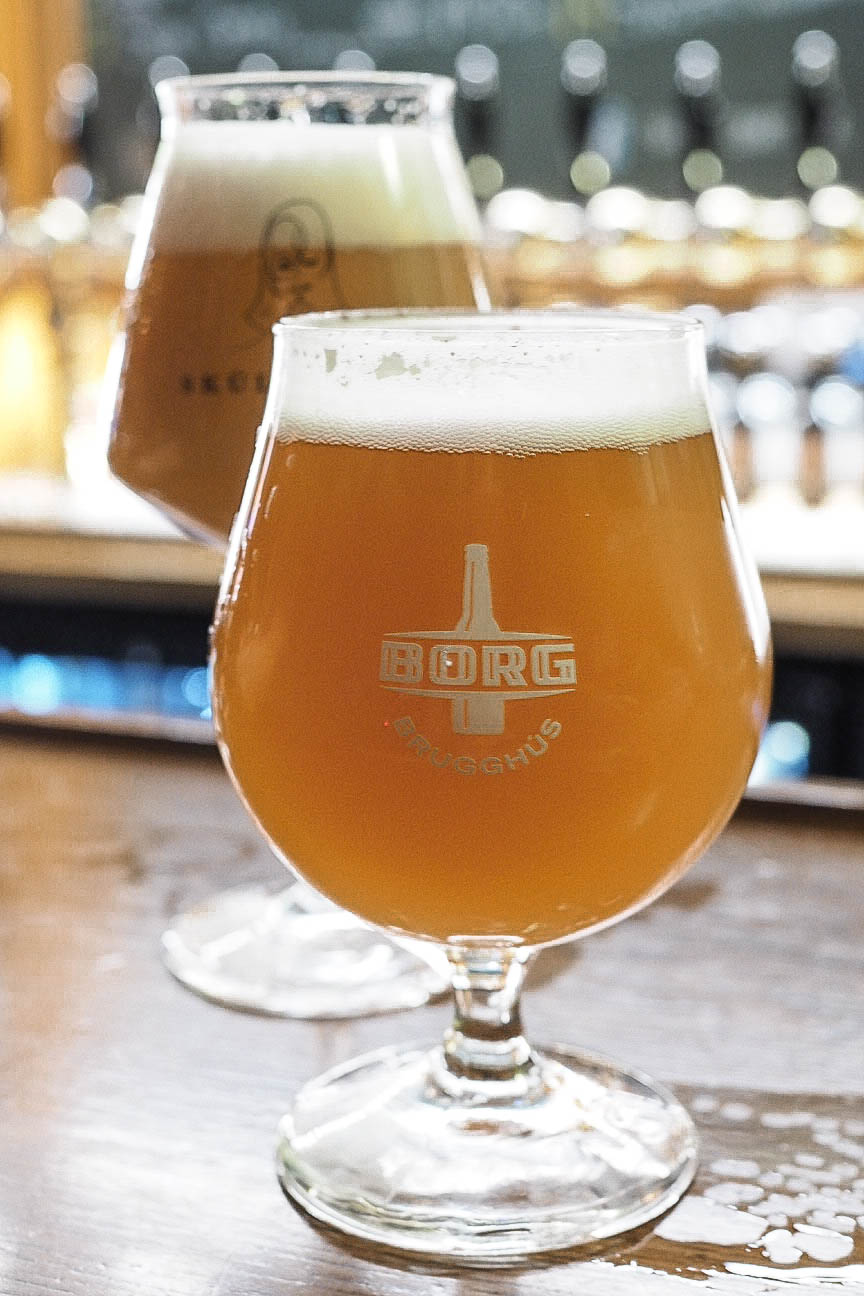 Yes, alcohol in Iceland is as expensive as the rumours say, so you have two choices: have a couple of cheap tinnies from the newsagents in your accommodation, or spend your money well and drink some local Icelandic brews. We pitched up at Sküli, sat at the bar and chatted with the extremely knowledgable barman about what we like and don’t like in a beer. I had a pint from Borg Brugghús, a small Rekyjavik-based brewery, and my boyfriend sampled First Lady IPA from Lady Brewery, another local company that is majority run and owned by women. Both were excellent; tasty and made with passion – two things I look for in every beer I drink. 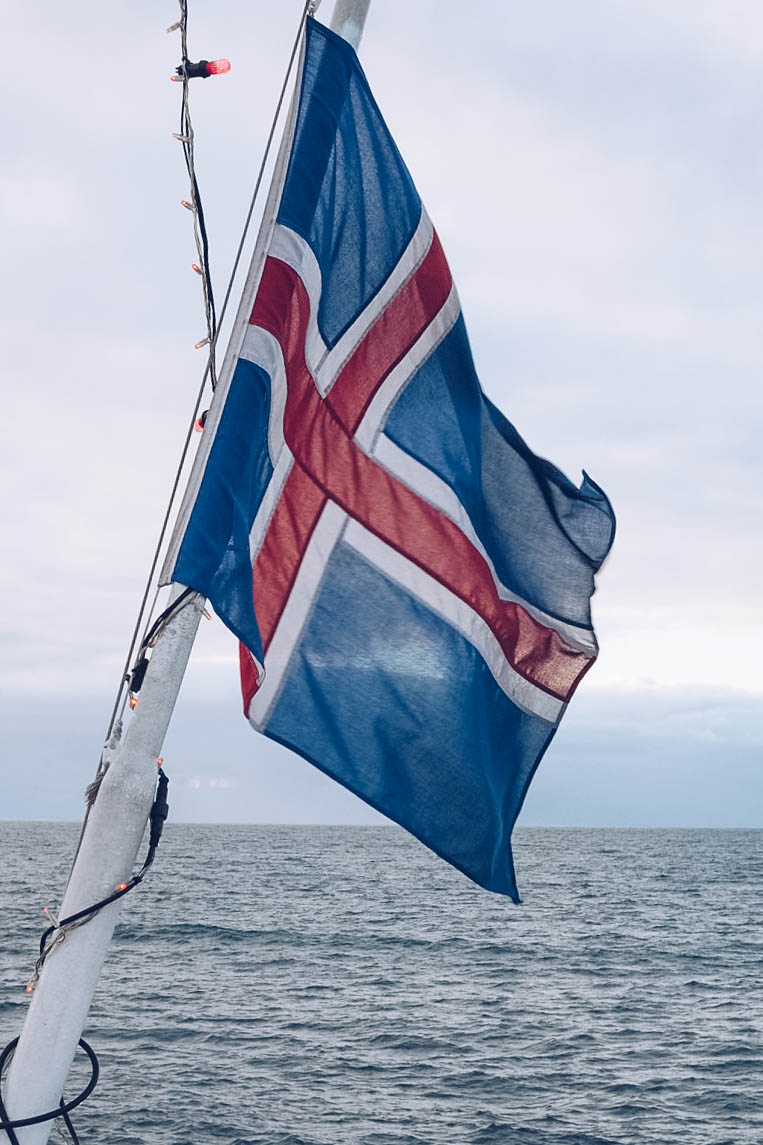 Reykjavik is small in size but big in personality. It’s hipster charms fit in seamlessly with traditional values and a passion for local and planet-friendly tourism which makes it an easy place to visit for your conscience. It is perilously expensive though, so budget carefully to make sure you see everything without having to live off Pot Noodles for the next month.

Where I went in Reykjavik 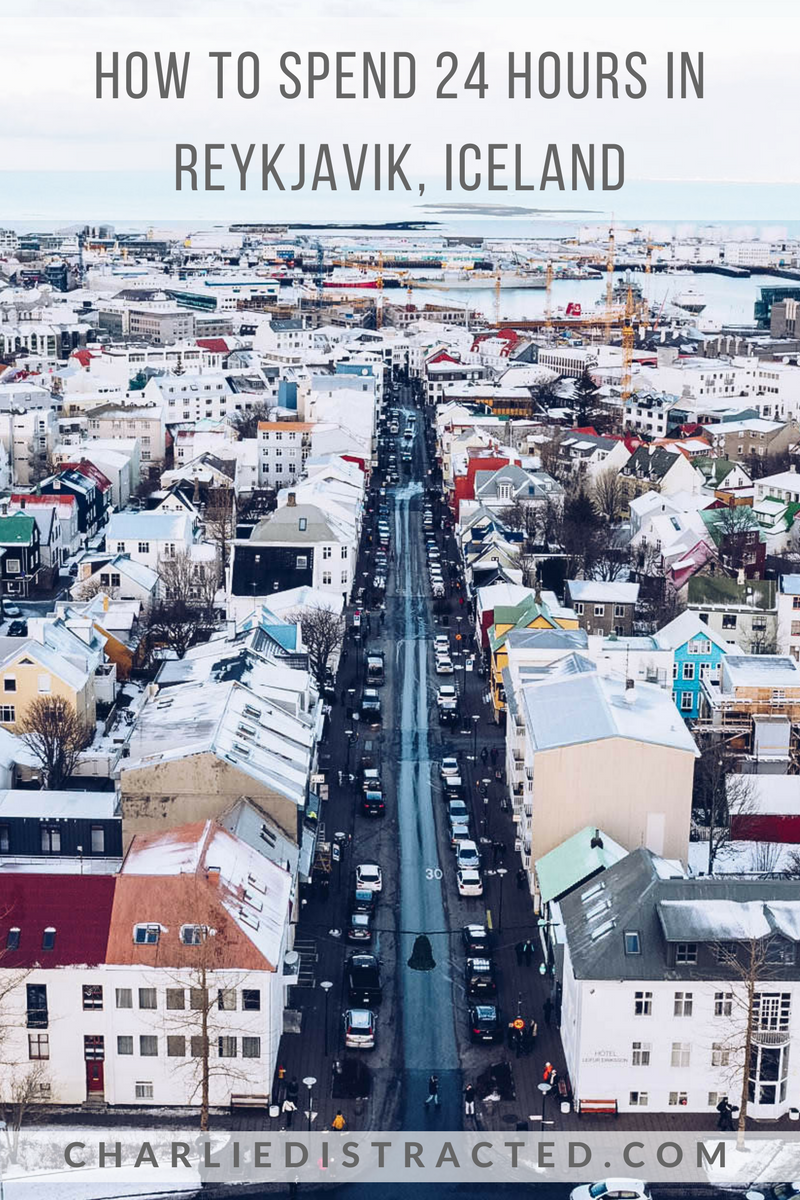 *Our Elding Whale Watching tour was complimentary. All words and opinions are my own.