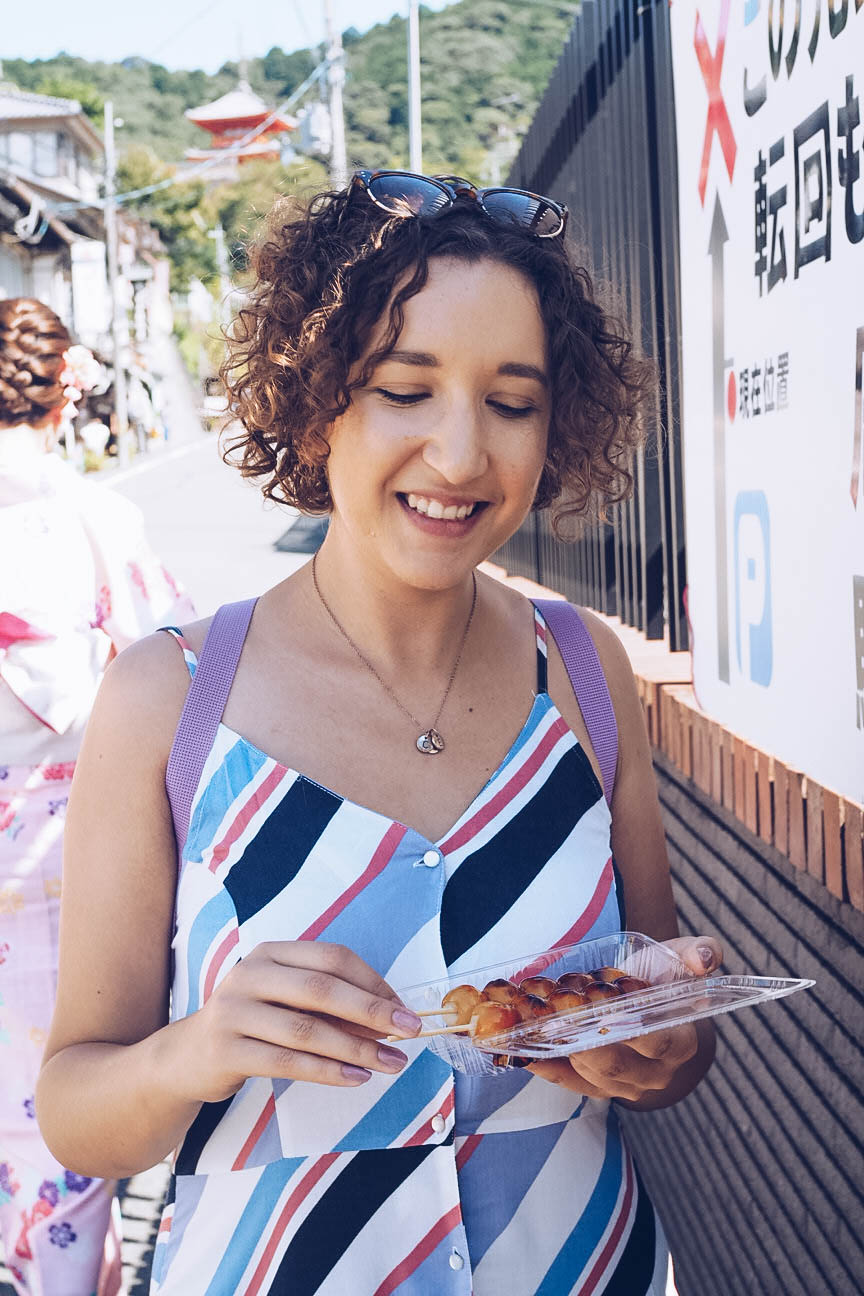 Japan, to my surprise, isn’t really a street food country. World-famous for its cuisine, I was surprised that there wasn’t stall after stall of vendors selling their wares in every city we visited, especially since nearby South Korea is FULL of them. It could be down to the fact that it is considered incredibly rude to walk along the road whilst eating; most places will either have a bin next to them so you can eat and dispose immediately after purchase, or they’ll insist that you sit in a physical premises. Although they might not be as plentiful as other Asian countries, there are street food stalls to be found, and these ten items where my ultimate favourites: 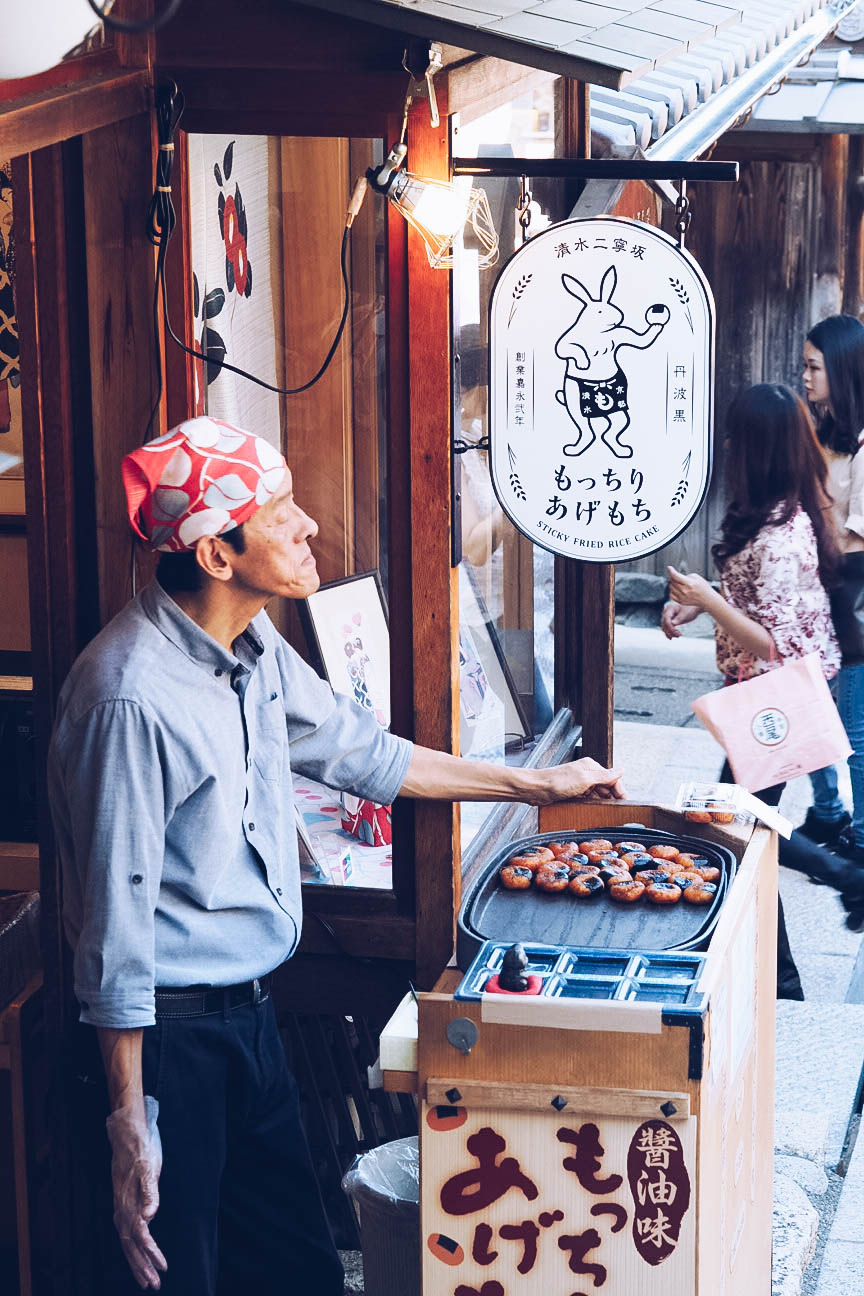 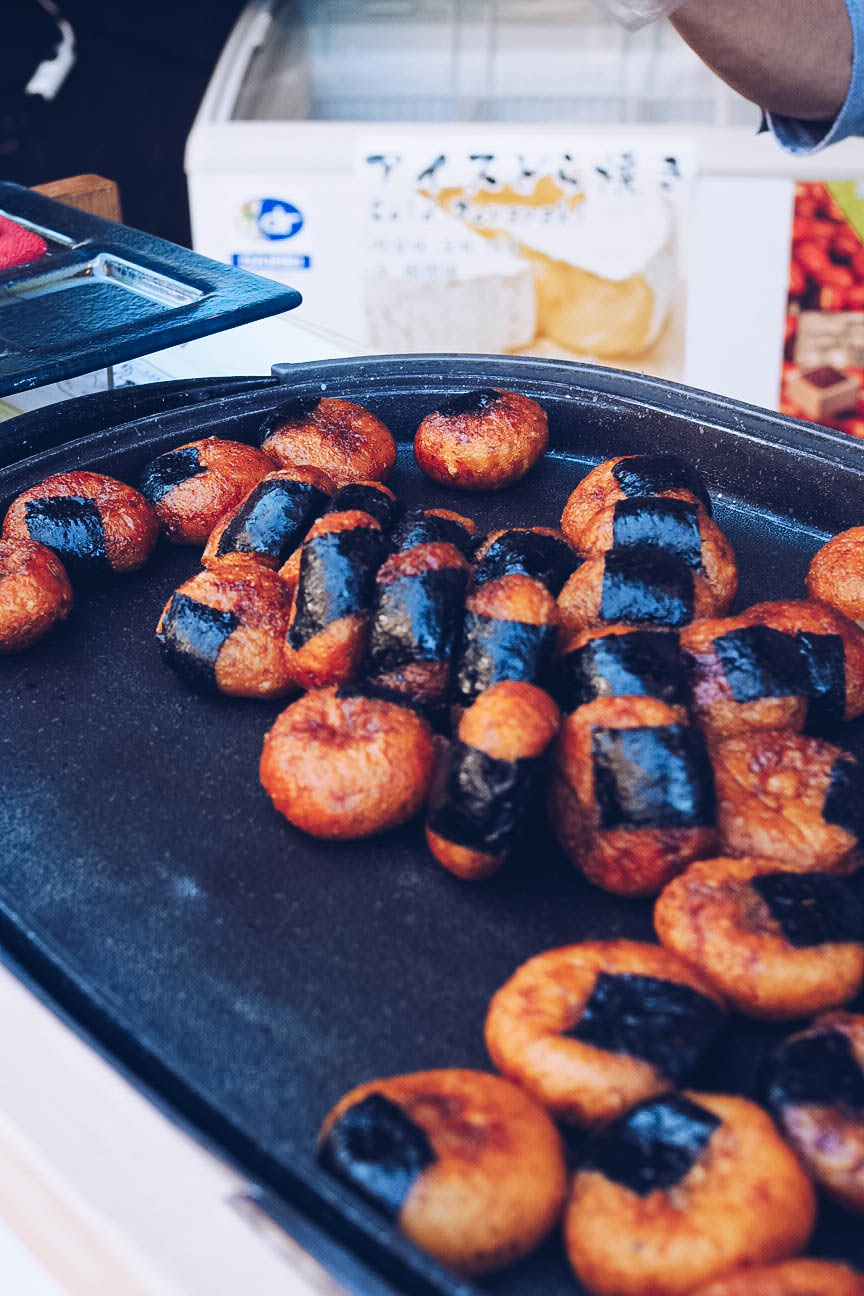 These are about the size of a Jaffa Cake and is a soft rice cracker, brushed in a sticky, sweet soy sauce and wrapped in a bit of nori seaweed at the bottom. Japanese street food LOVES some form of rice brushed in soy, so you’ll find a lot of variations of these ingredients pretty much everywhere. I found these being cooked over a charcoal grill by a man with an amazingly expressive face that looked like it was made from sun-drenched leather, around the Sannen-zaka district in Kyoto. 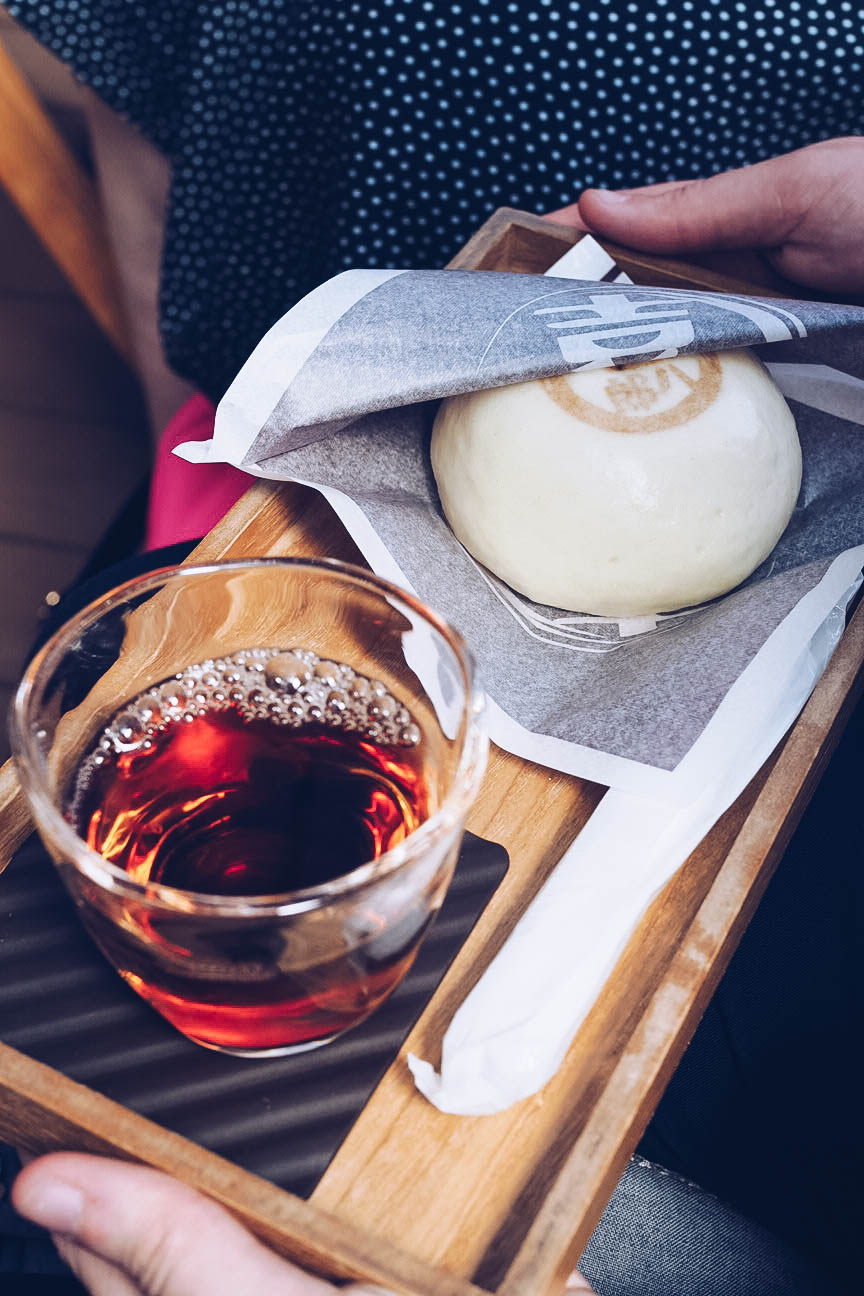 I’m sure these have some sort of official name, but they’re essentially like a char siu bun but with beef rather than the Chinese traditional pork filling. I found this soft sweet dough packed full of pulled meat at Kihachiro, on a boiling hot day in Kyoto having travelled from Osaka by bullet train that morning and not eaten anything. This went down a treat with a refreshing iced oolong tea. 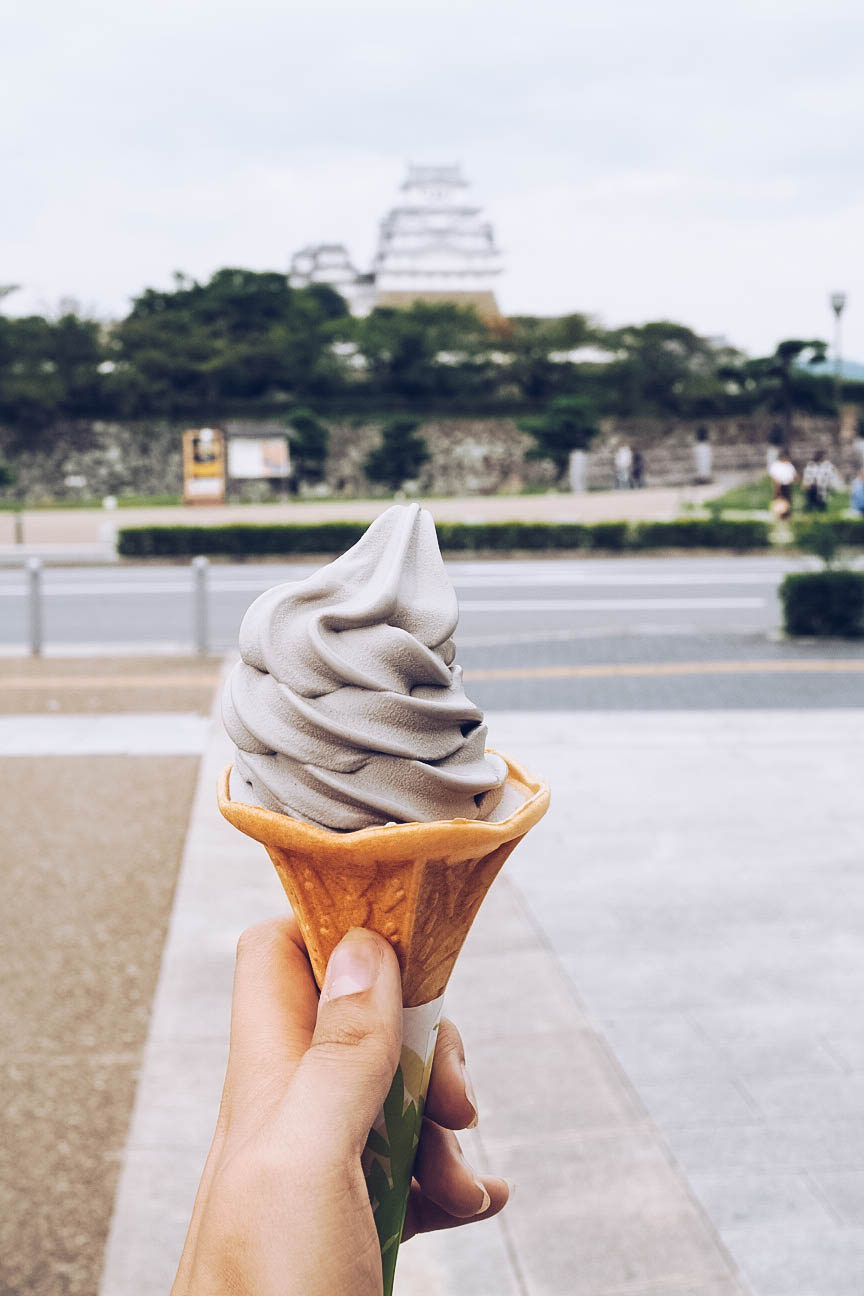 This is absolutely something that I wanted to try purely because I’d seen it on the internet, but it turned out to be completely delicious. It was a creamy soft serve with a deep nutty flavour, which will completely appeal if you’re on the fence about something as sweet as peanut butter. The charcoal colour is completely natural apparently, but it definitely stains white t-shirts as I found out later. I found mine just on the outskirts of Himeji Castle, but I saw it elsewhere around Japan. 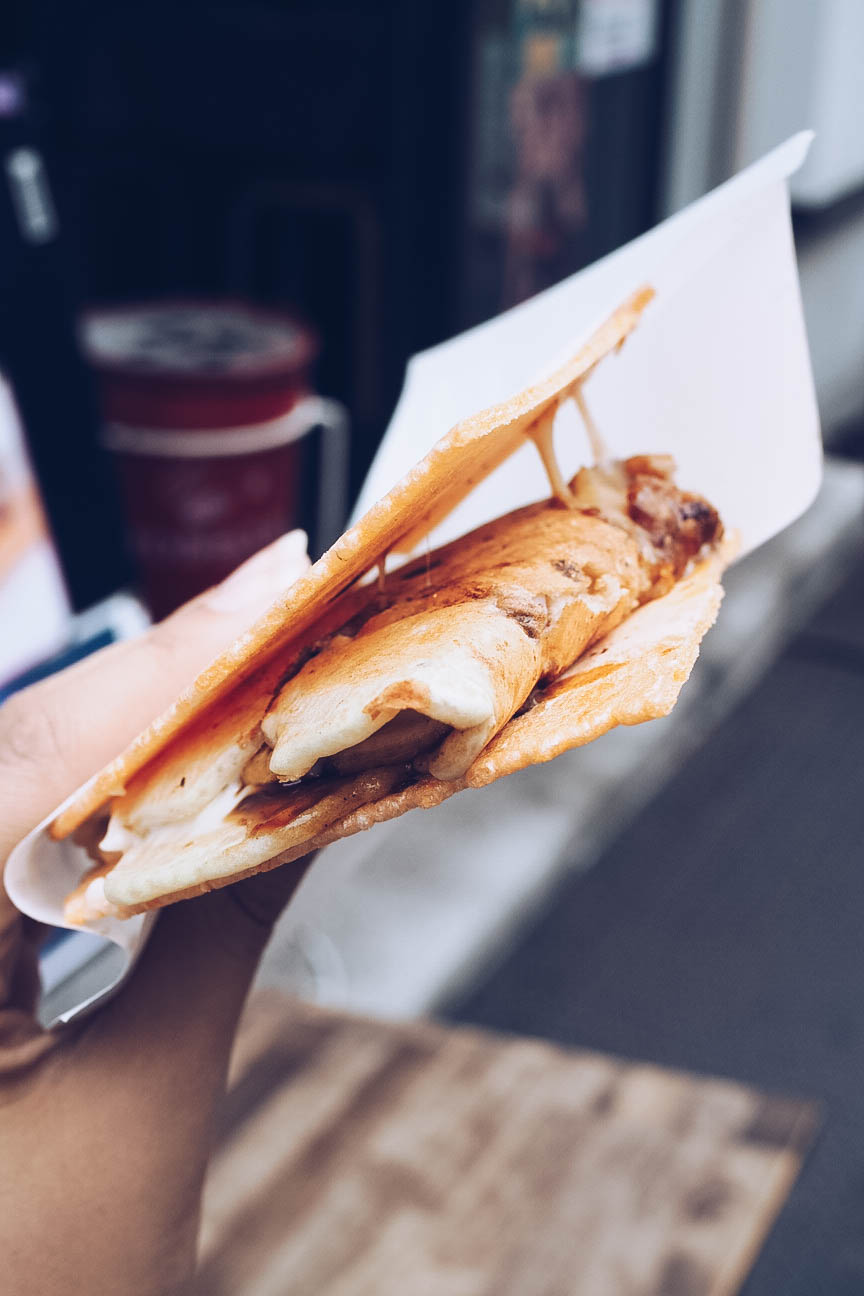 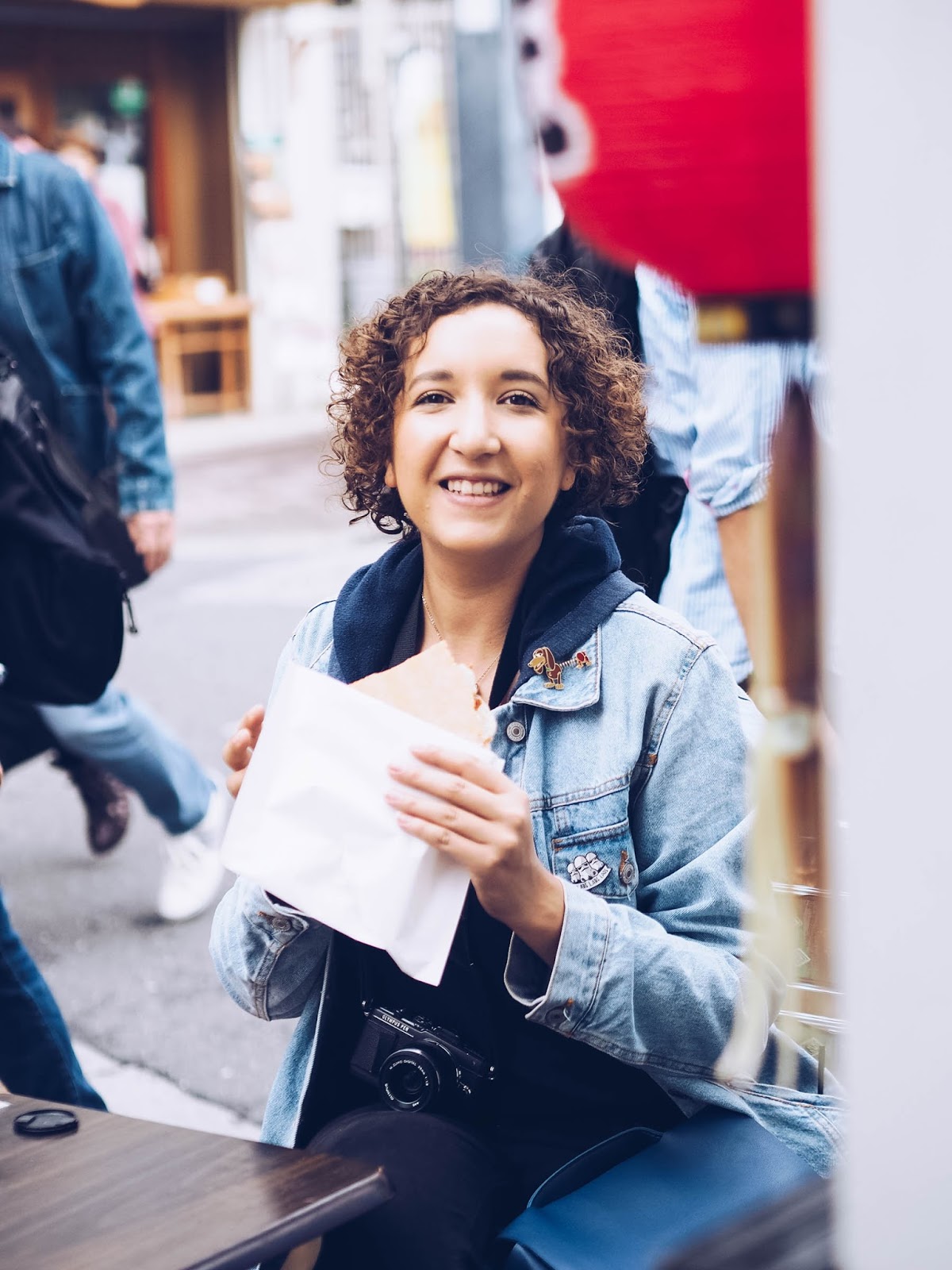 This grilled squid dish is actually a local speciality of Osaka, but I found mine at Ikayaki Yakiya in the Yanaka Ginza area of Tokyo. A tiny little serving space with one man cooking for the masses, we managed to nab a seat outside to eat the squid in a crispy savoury pancake. Mine actually came with cheese and soy sauce (obviously) which meant I got a western hit to a new eastern flavour. 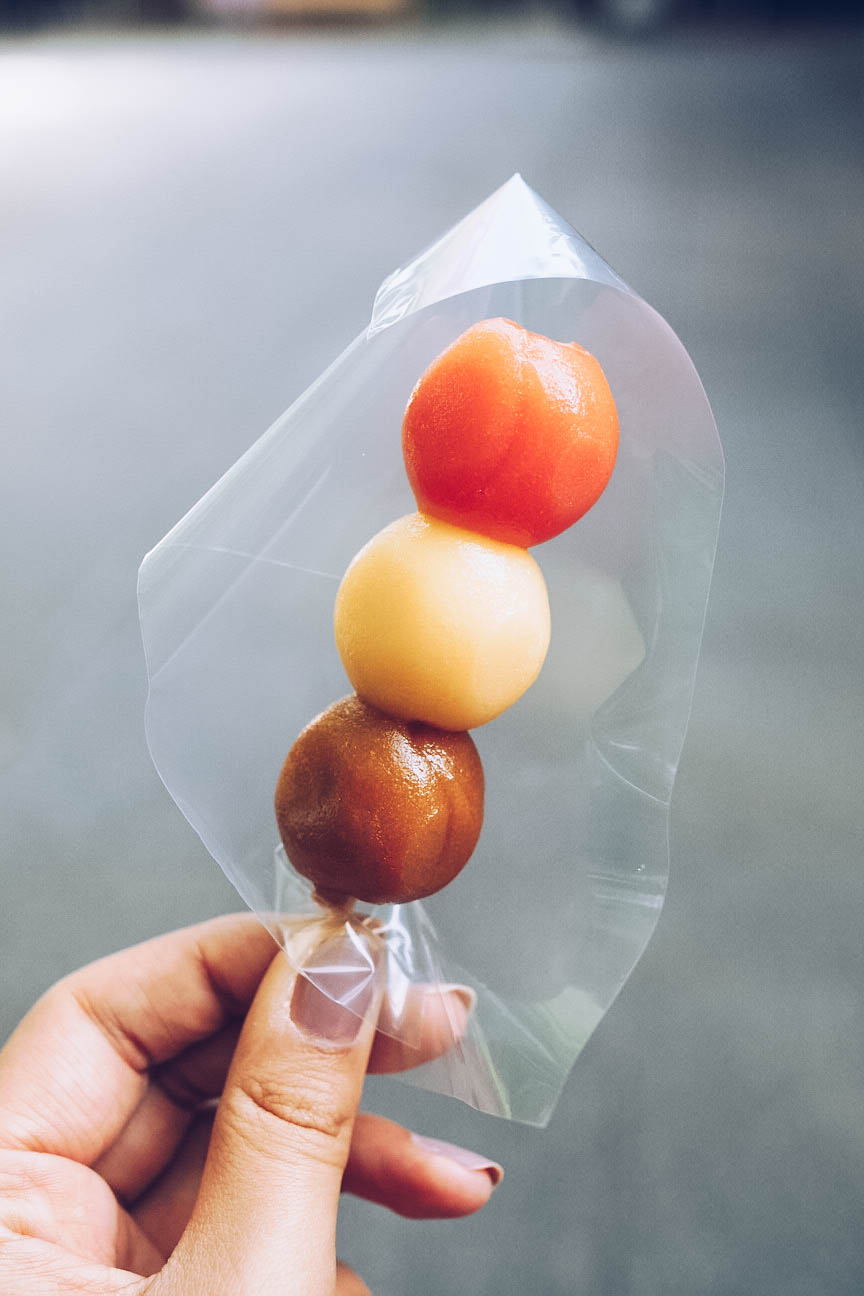 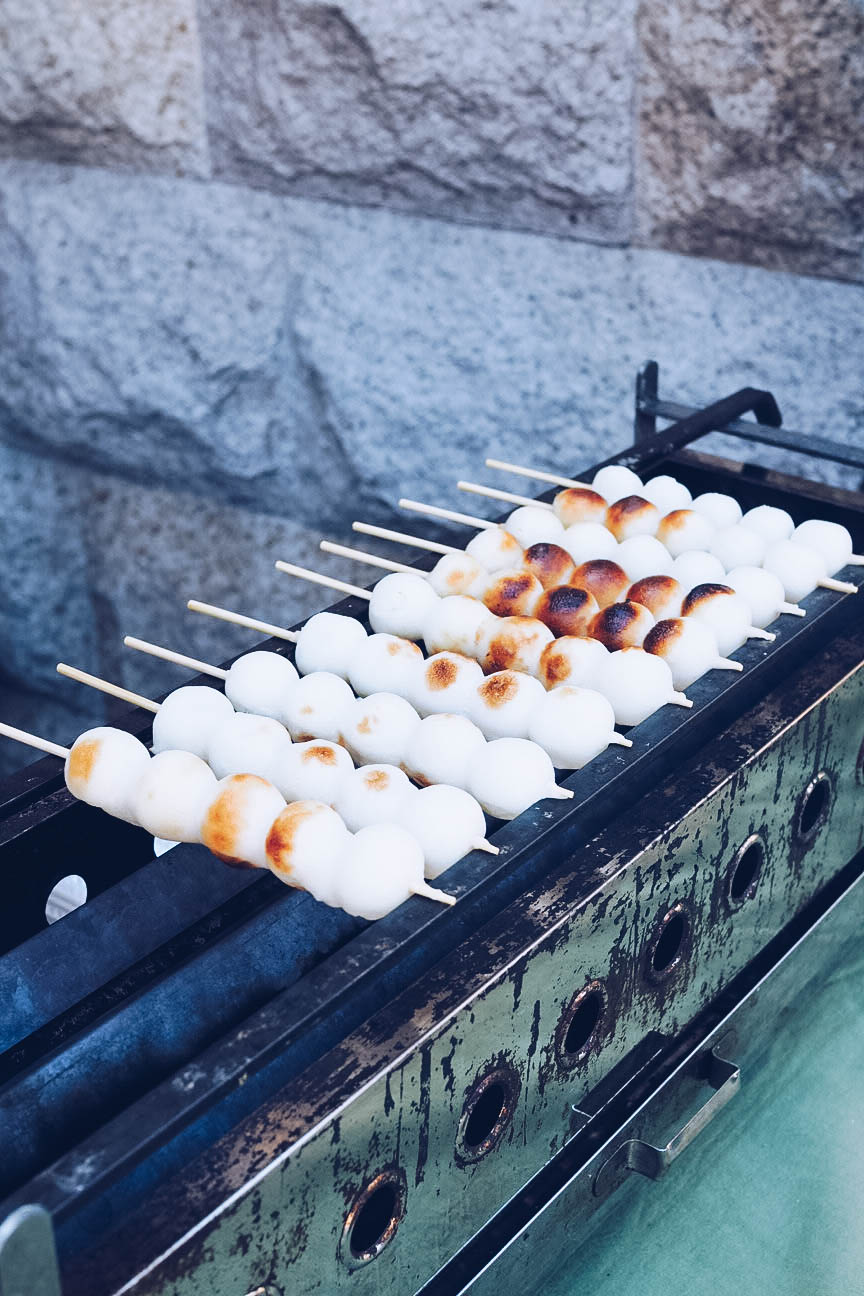 More sticky rice balls, but this time on sticks and not savoury but sweetened with (altogether now…) SOY SAUCE *shock horror*. Thing is, they are genuinely bloody delicious, and each variation is every so slightly different. I found the colourful variety (great for using the #emojisinthewild hashtag on Instagram!) at a tiny stall at the back of the Arashiyama Bamboo Forest, with red food colouring and matcha green tea powder giving them colour. The matarashi dango version are covered in soy, eaten warm and were my favourite version of this Japanese staple. 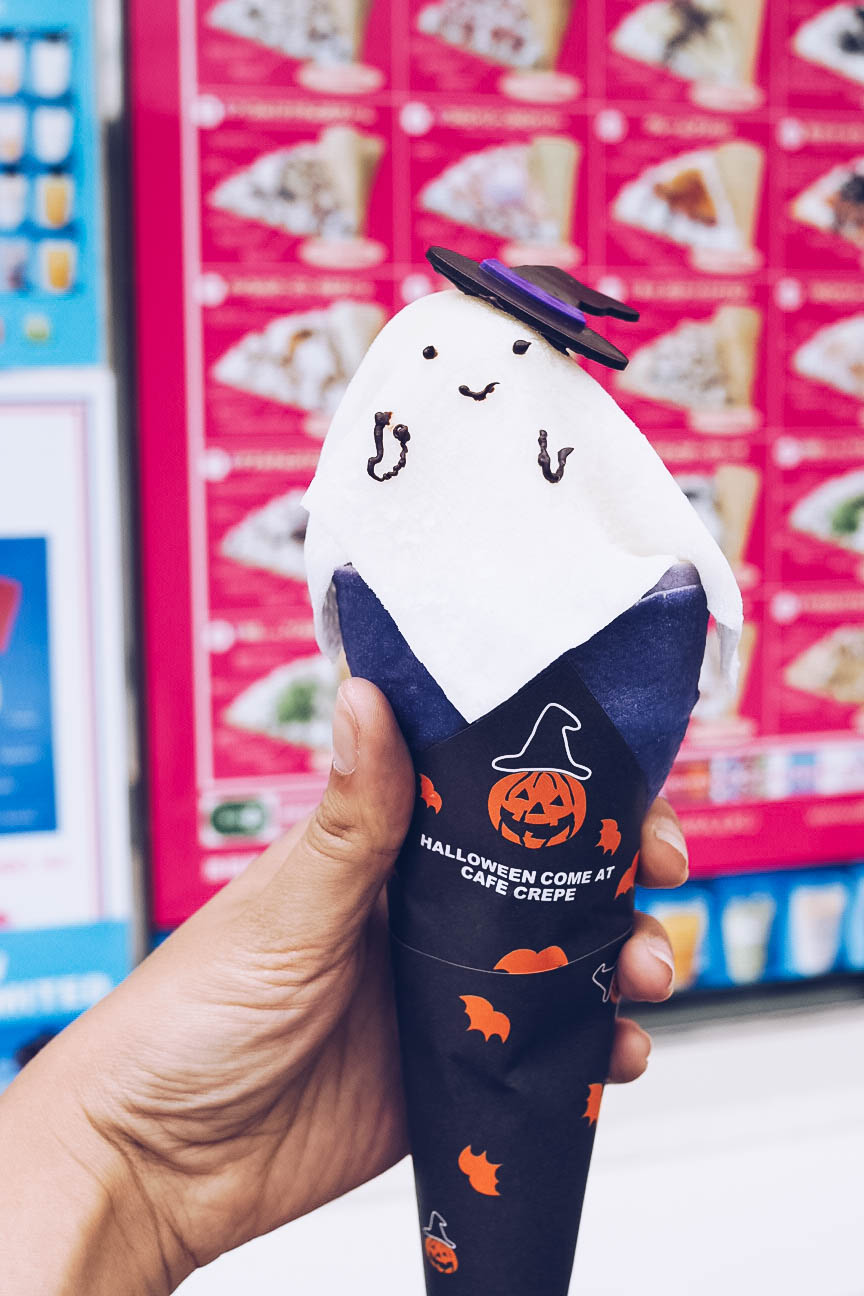 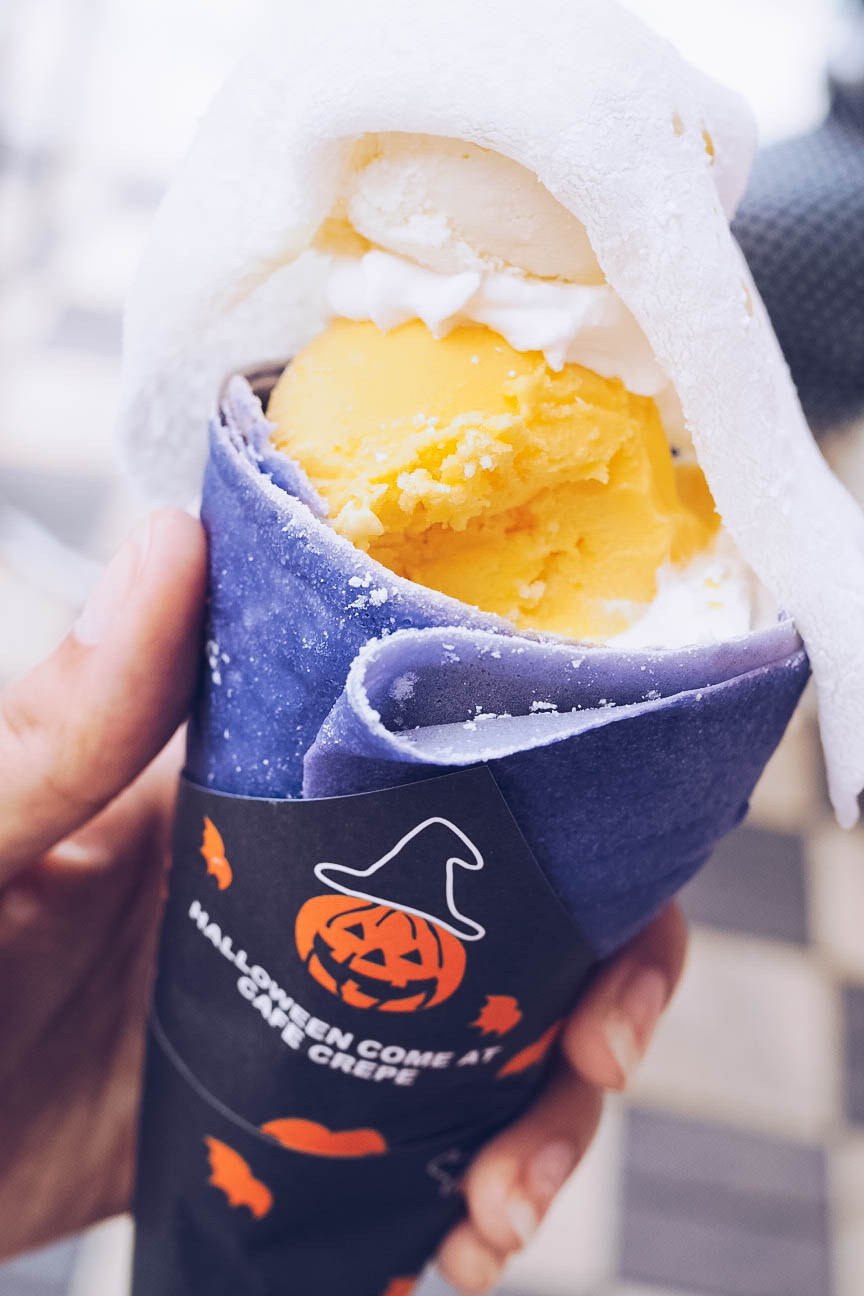 This is pretty specific to Harajuku in Tokyo, but in that particular area you can find them literally everywhere. The ones at Cafe Crepe though are legitimately mental. Mine was Halloween themed and came with a SLICE of pumpkin cheesecake wrapped in a purple crepe with a scoop of pumpkin ice cream, a scoop of vanilla ice cream and a heap of whipped cream. Obviously you’re going to go there, because why wouldn’t you? 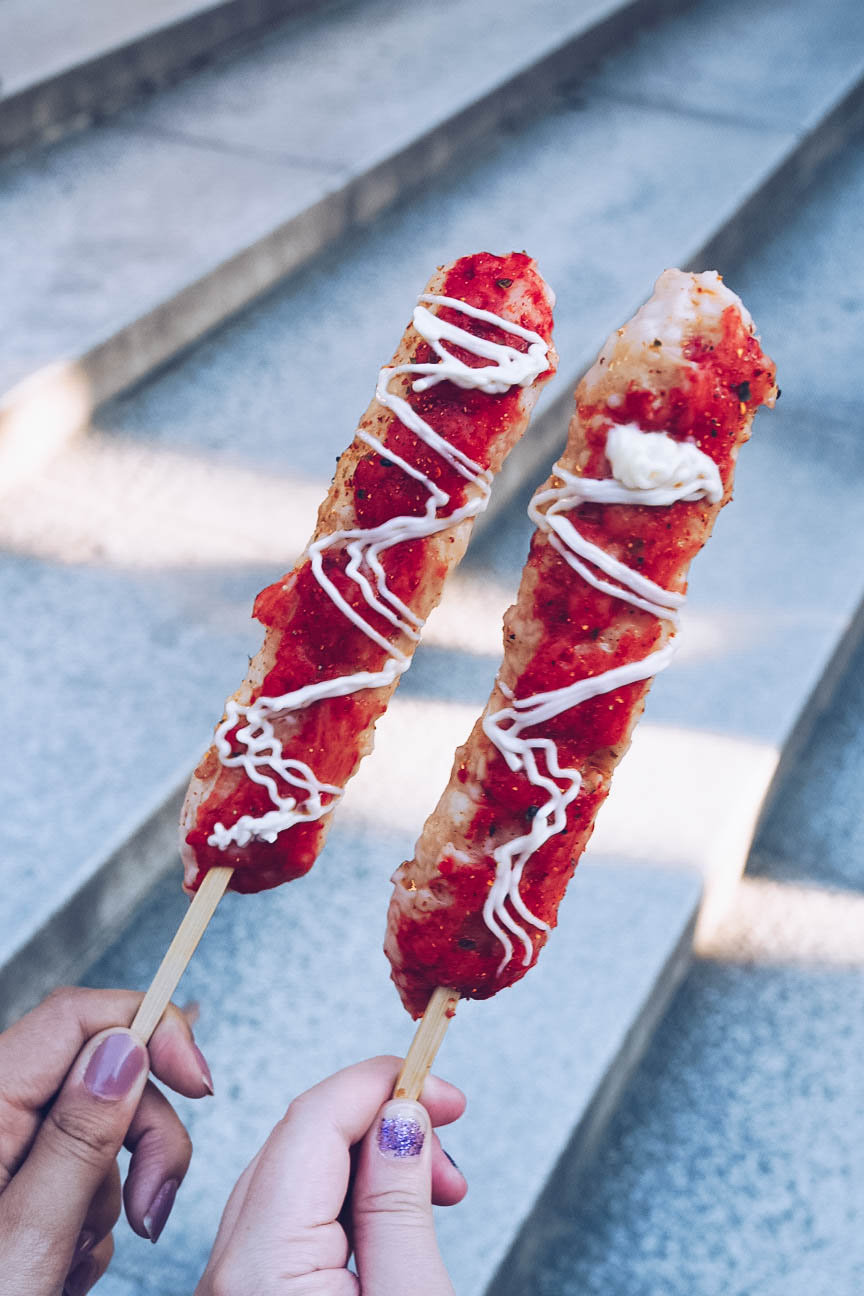 No, not those horrible bright pink processed things that used to appear in school dinners. These were actual crab meat on huge corndog like sticks, made with nothing but what you would hope, just with the added bonus of some seasoning and a spicy mayo-type sauce drizzled on top. It was recognisable but unfamiliar which is pretty much the best of all the things. 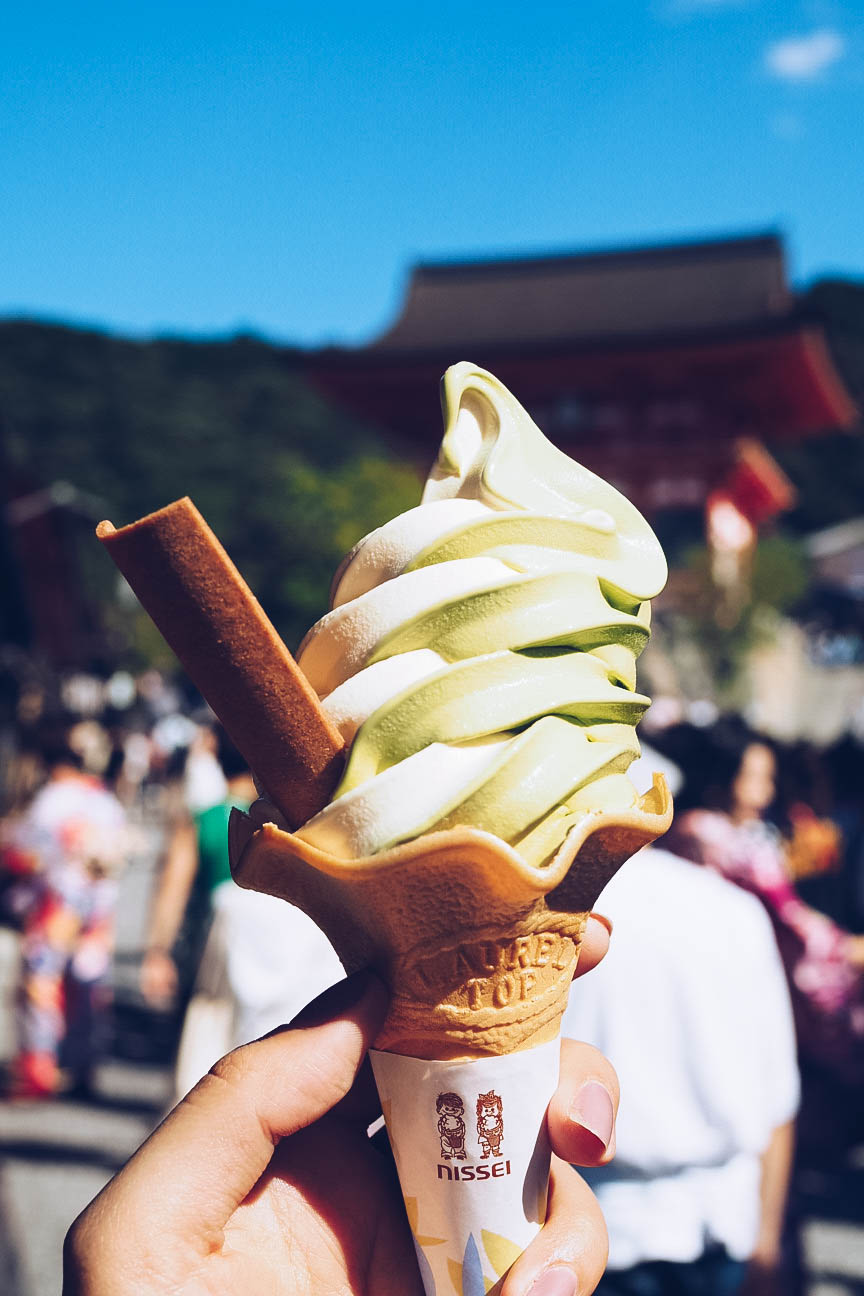 This is available in London now, but I’ve held off trying it until I visited Japan. I preferred the version combined with a vanilla ice cream as it evened out the bitterness. Rather than a chocolate flake, this came with a thin cinnamon biscuit which was so delicious, I sought out a box of them in a tourist shop in Kyoto and brought them back to the UK with me to crumble over everything I can think of. 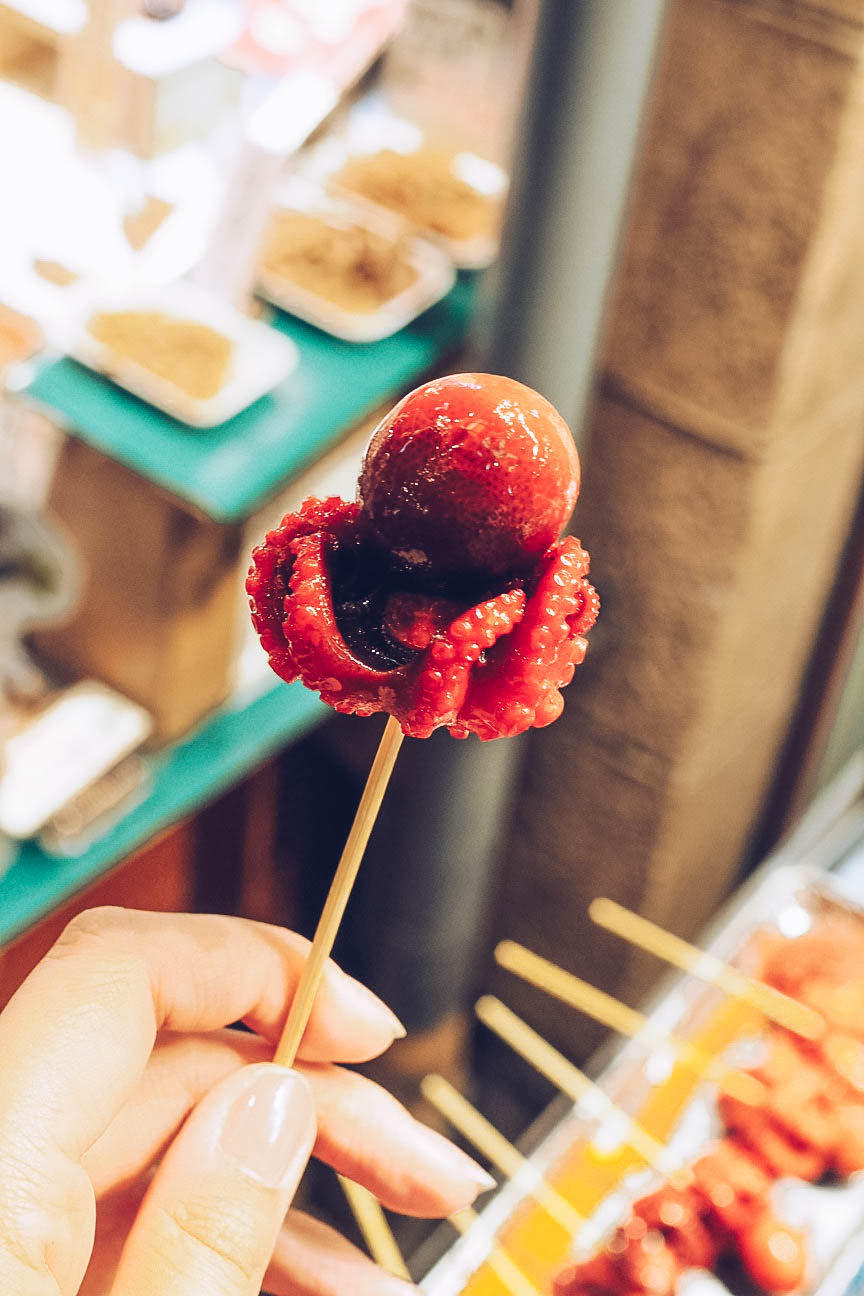 Probably the most divisive of street foods is tako tamago: a baby octopus on a stick, with a hard-boiled quail’s egg in its head, covered in sticky soy. I knew I wanted to try one but was obviously wary when the option was actually presented to me. Katy and I were brave enough to dive  in and it was surprisingly good! Pretty chewy and served cold, but certainly not vom-inducing, as long as you can get past the fact you’re eating a whole baby octopus! 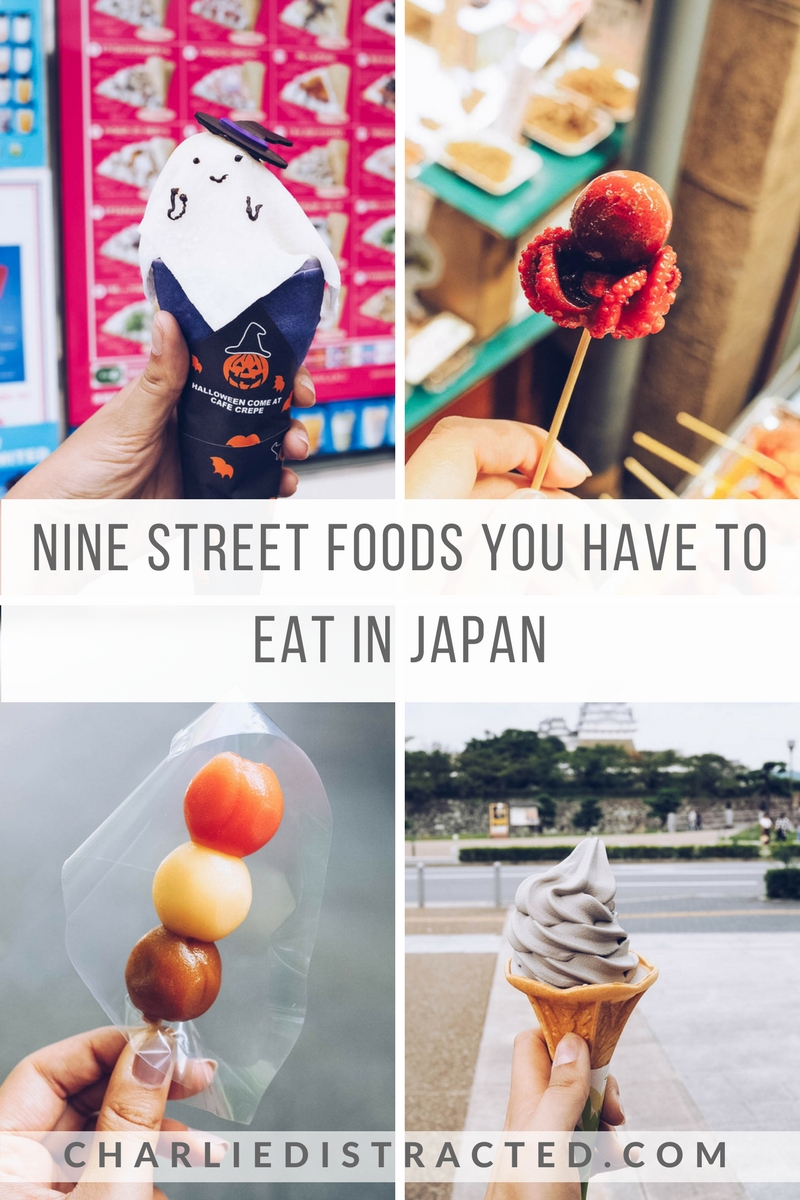 (Photos of me taken by Katy English)