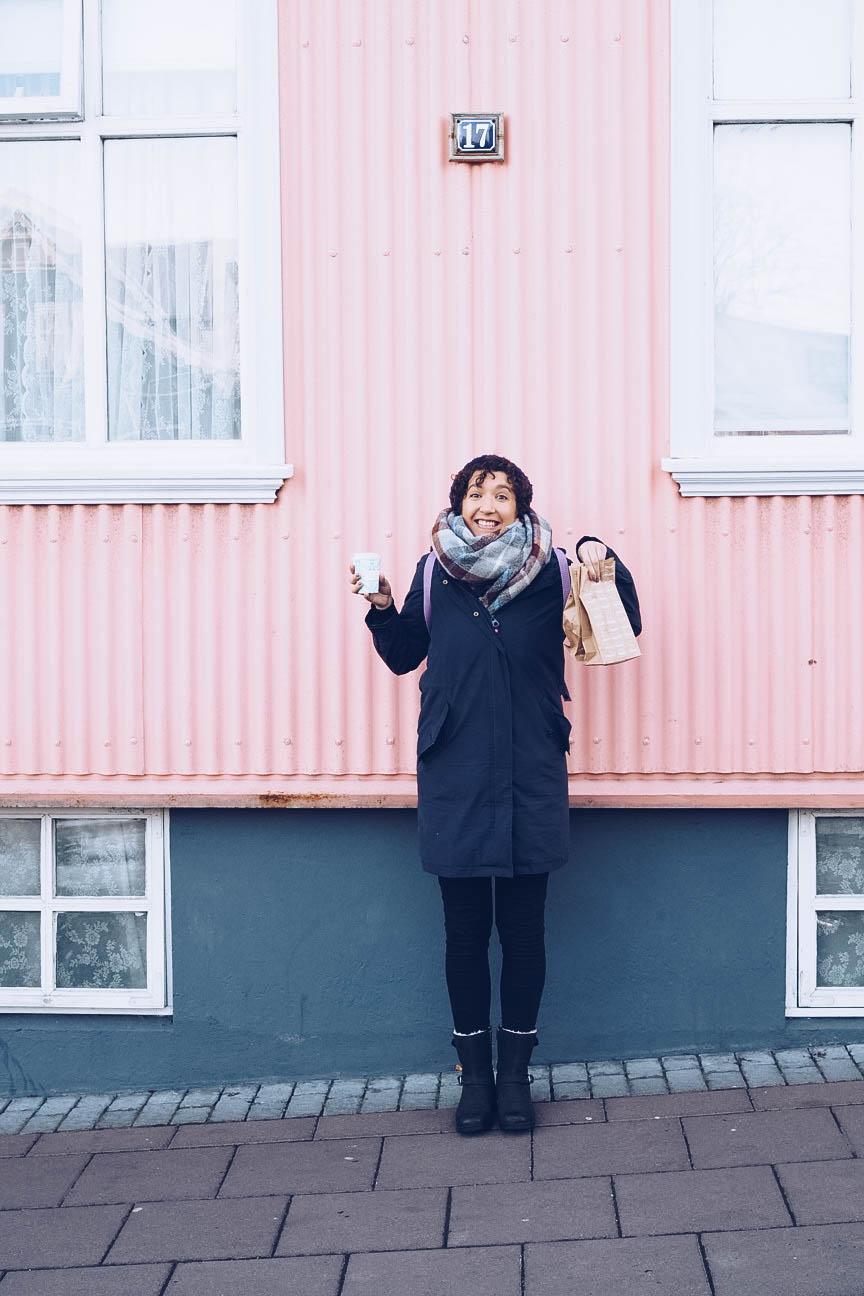 The food in Iceland has a bit of a reputation for being out-of-the-ordinary, seemingly centred around the rare meats variety. Now, as a woman who has eaten a baby octopus on a stick with a quail’s egg in its head in Japan, I’m down with trying most things. However, I read a lot about how sustainable some Icelandic dishes are and made a conscious decision to avoid them, meaning no puffin or whale on my plate, but that didn’t stop me from finding delicious food in Reykjavik.

Here’s the items you should look out for and where I enjoyed them the most: 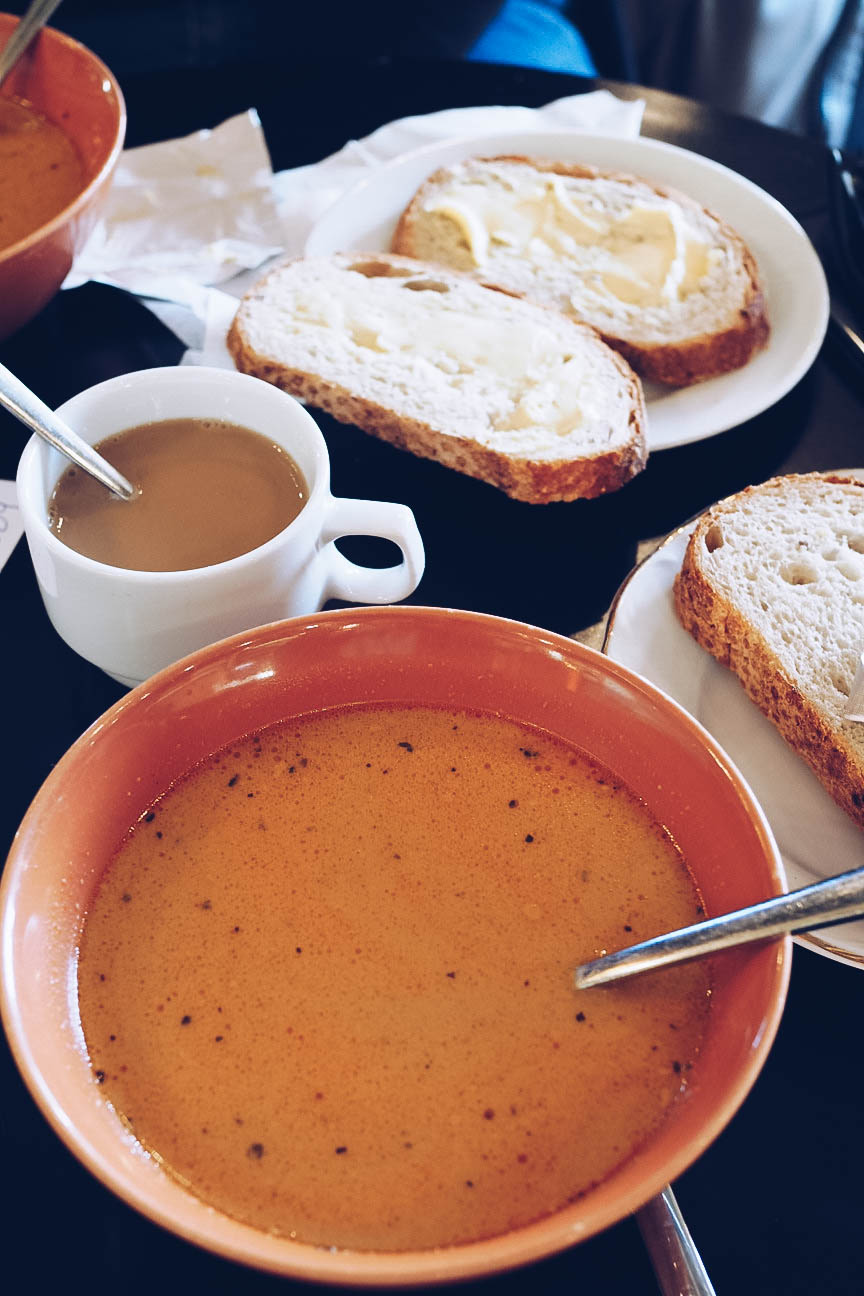 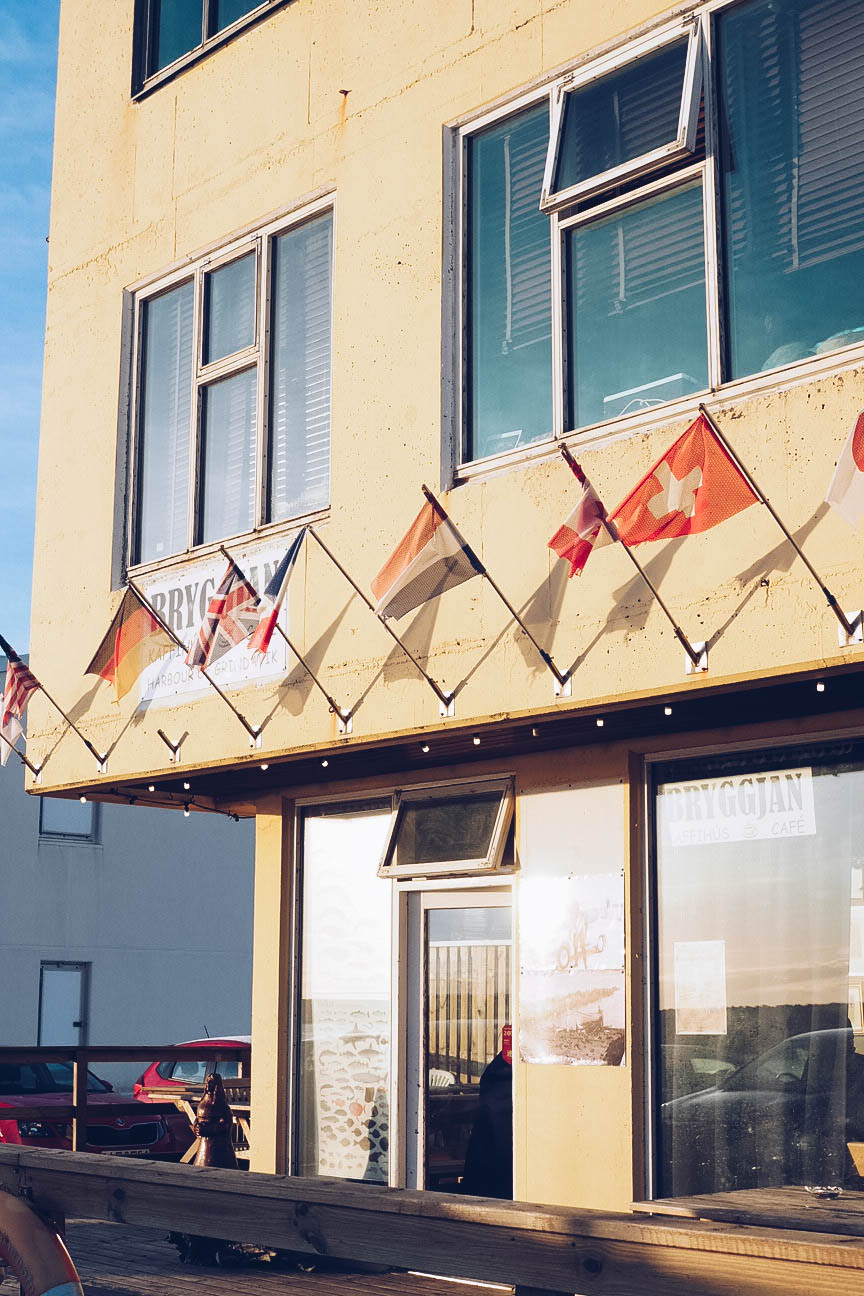 Being an island, fishing is a huge part of the country’s economy, and with strict environmental laws, you can be sure that the food in Iceland is fresh and sustainable. We’d had lobster soup at the well-known Seabaron restaurant in central Reykjavik, but the best version we tried was a little way out of the town at Bryggjan Kaffihus. Ten minutes drive from the Blue Lagoon, this unsuspecting fisherman’s haunt offers unlimited soup, bread and tea or coffee for around £8, which is a steal considering the cost of food in Iceland was eye watering at times. It was creamy and peppery and a whole level above anything else we’d tried. This was, surprisingly, my favourite meal of the entire trip. 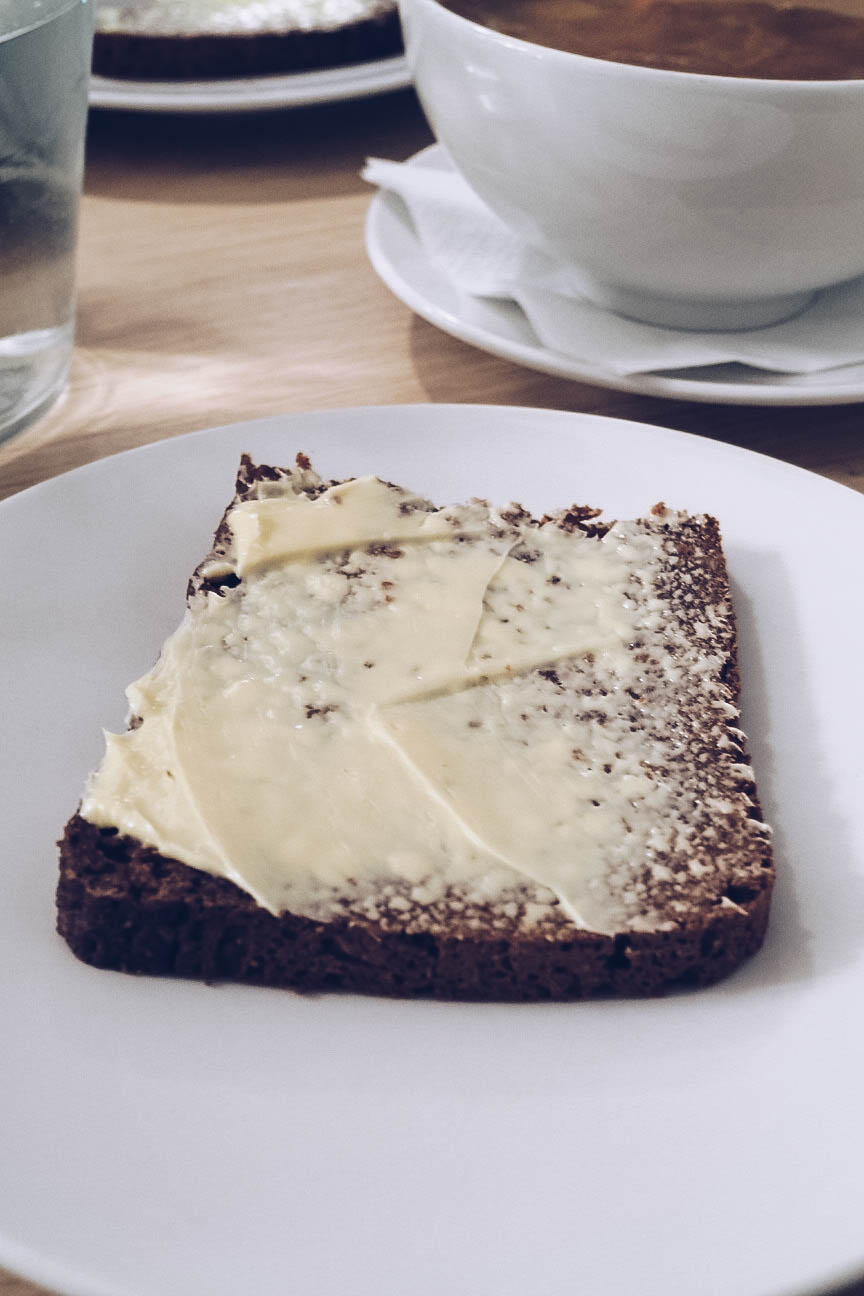 Thin slices of this dense bread are served with slabs of salty butter and taste great with the aforementioned lobster soup. Pretty much everywhere in Reykjavik will serve it, but it’s Cafe Loki, right opposite Hallgrímskirkja church, that does a bizarrely delicious spin on it. Rye bread ice cream is the dish to order here, and tour groups pack it out to try a taste. It has the expected sweetness of an ice cream but who’da thunk it, it does in fact retain the undeniable flavour of rye bread. Extremely clever stuff. 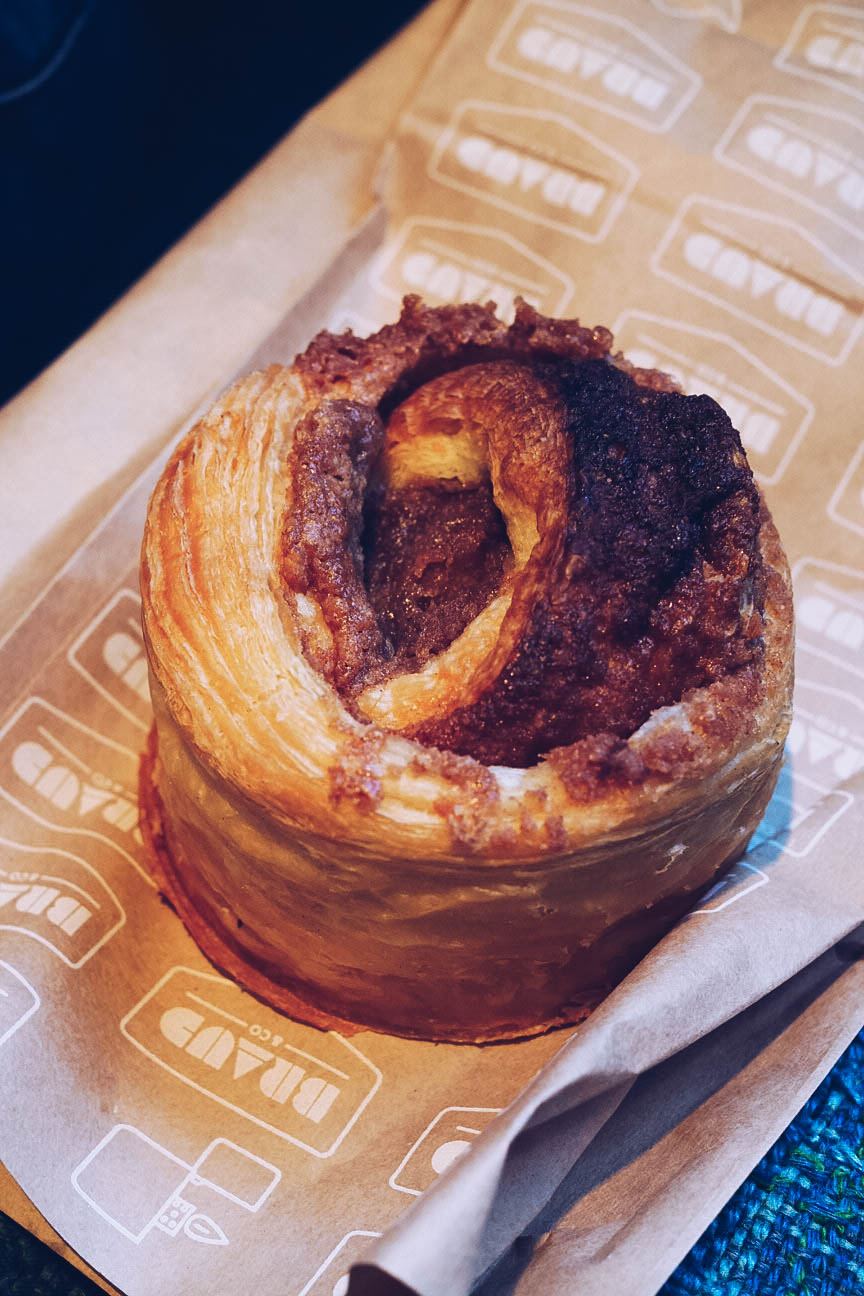 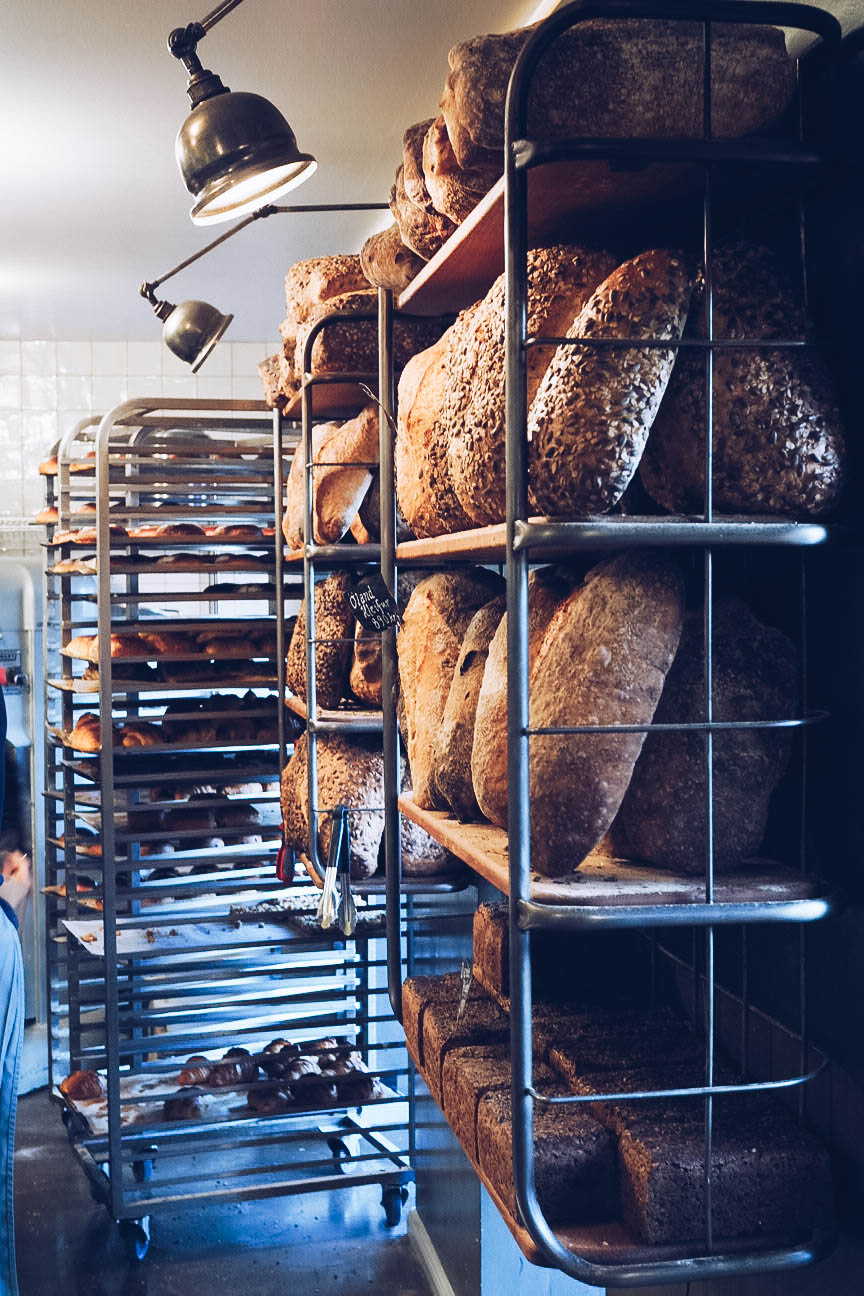 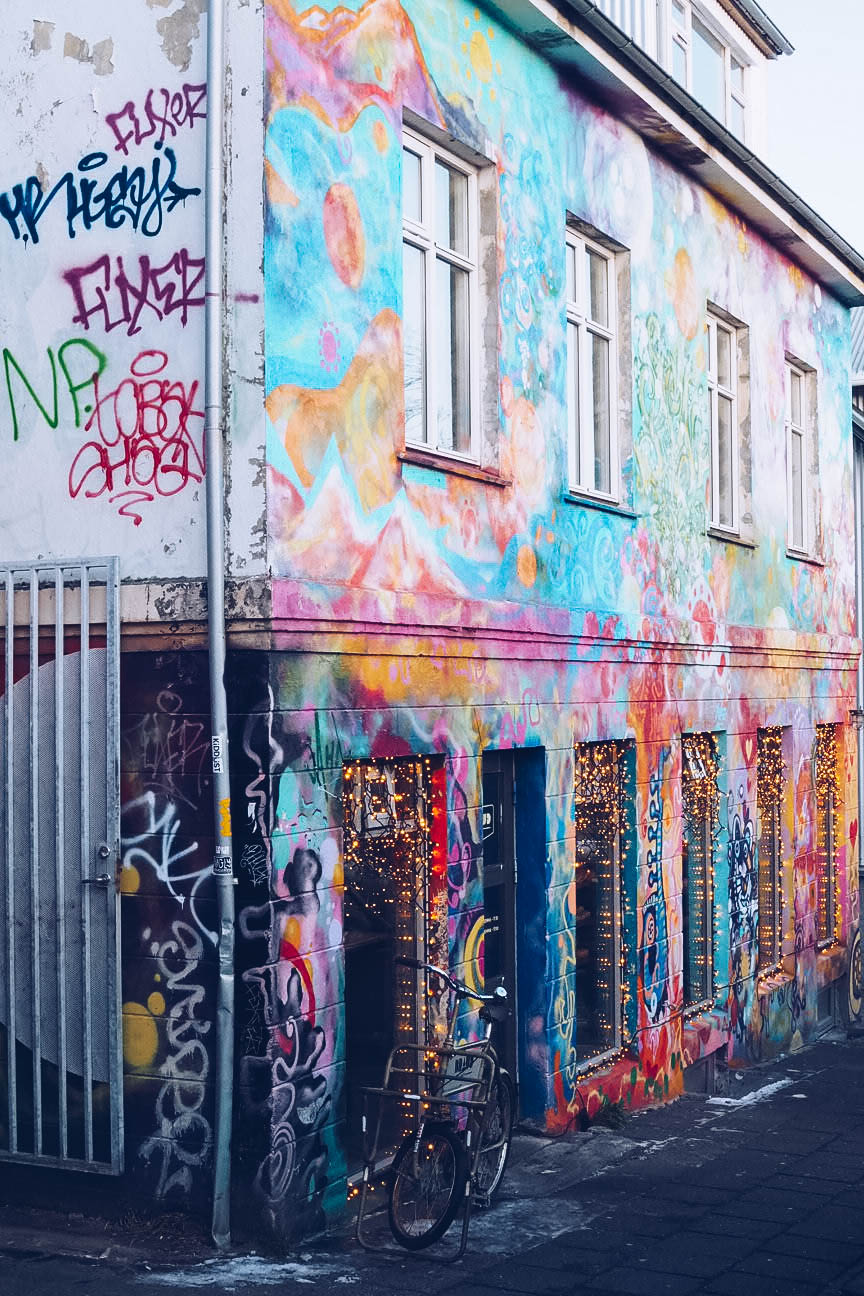 Everyone knows Scandinavia nails cinnamon rolls better than anyone else (I ate a ton of them in Norway, the place of their origin), and Iceland is definitely not an exception. Sadly, by the time I made it to the graffiti-covered entrance of Brauð & Co, the rolls had sold out but the cinnamon croissant I had instead absolutely rocked my world. Pastry so buttery and flaky that I’m sure the French are up in arms, and so much cinnamon sugar that I wasn’t just licking my fingers but the inside of the bag it came in too! 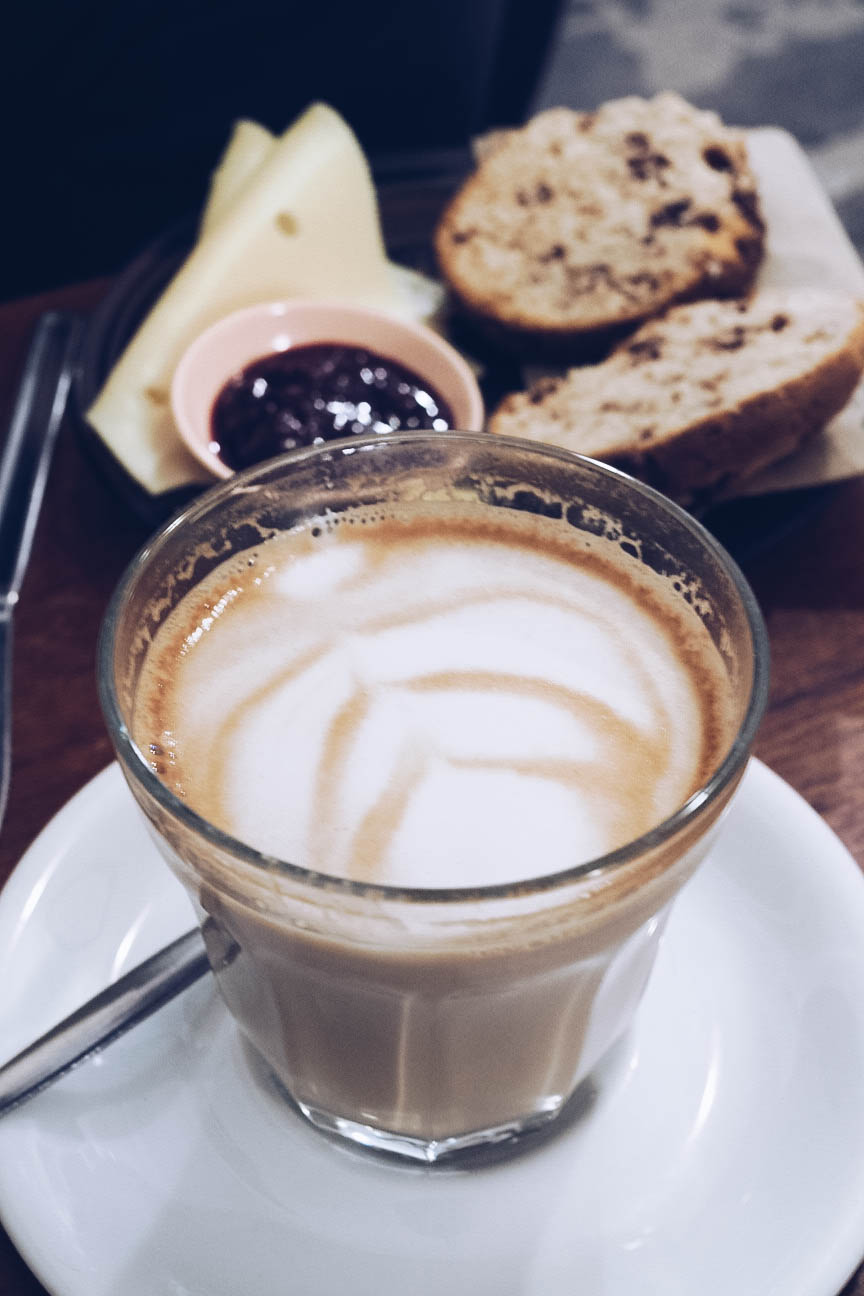 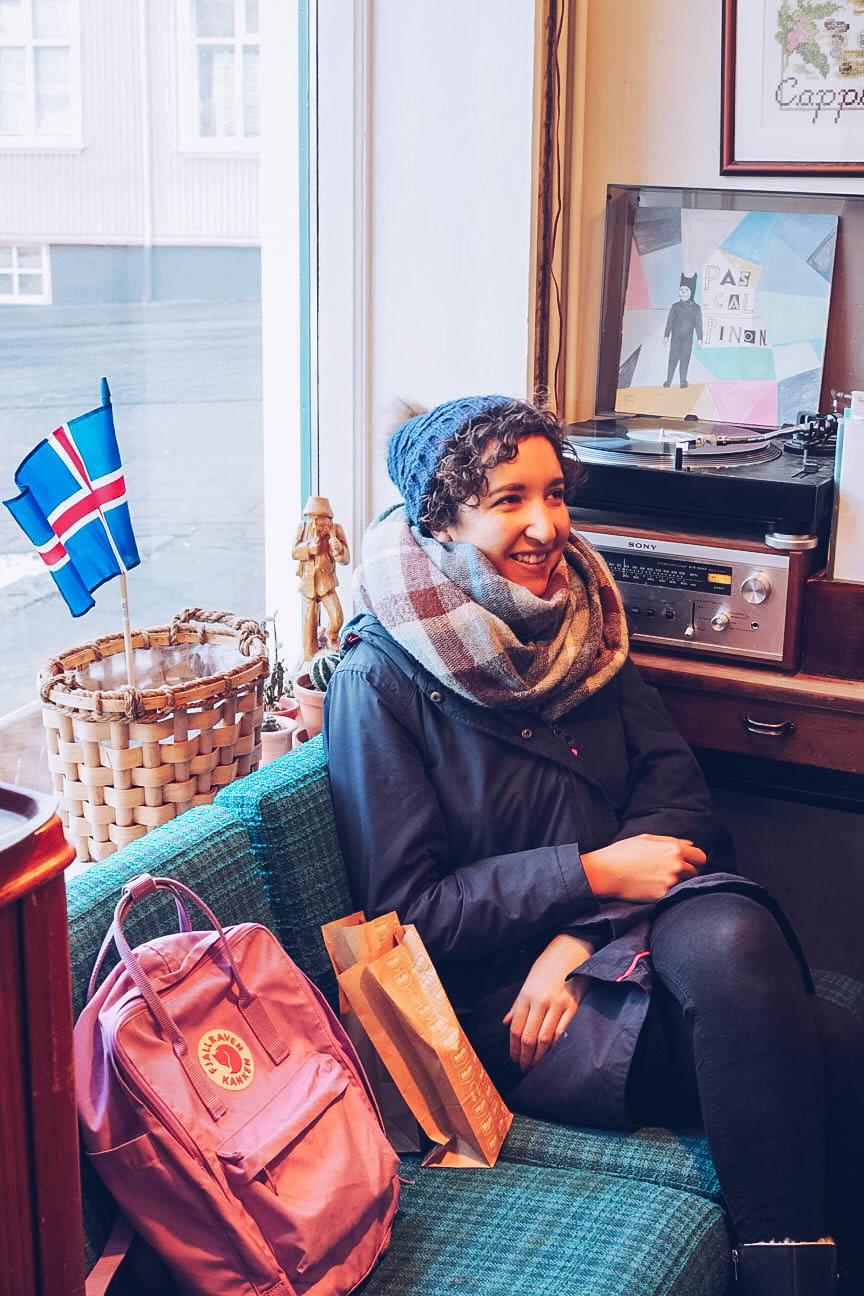 We were really spoilt for choice with coffee shops; a caffeine dependency makes sense when you’re in a country that spends a lot of its days in darkness! The place we ended up going back to though was Reykjavik Roasters. As the name suggests, the beans are roasted on site for coffee that tastes as serious as the owners are about making it. The delightfully chilled out hipster vibe is awesome too; perch yourself in the window next to the record player and watch the calm of Reykjavik meander by. 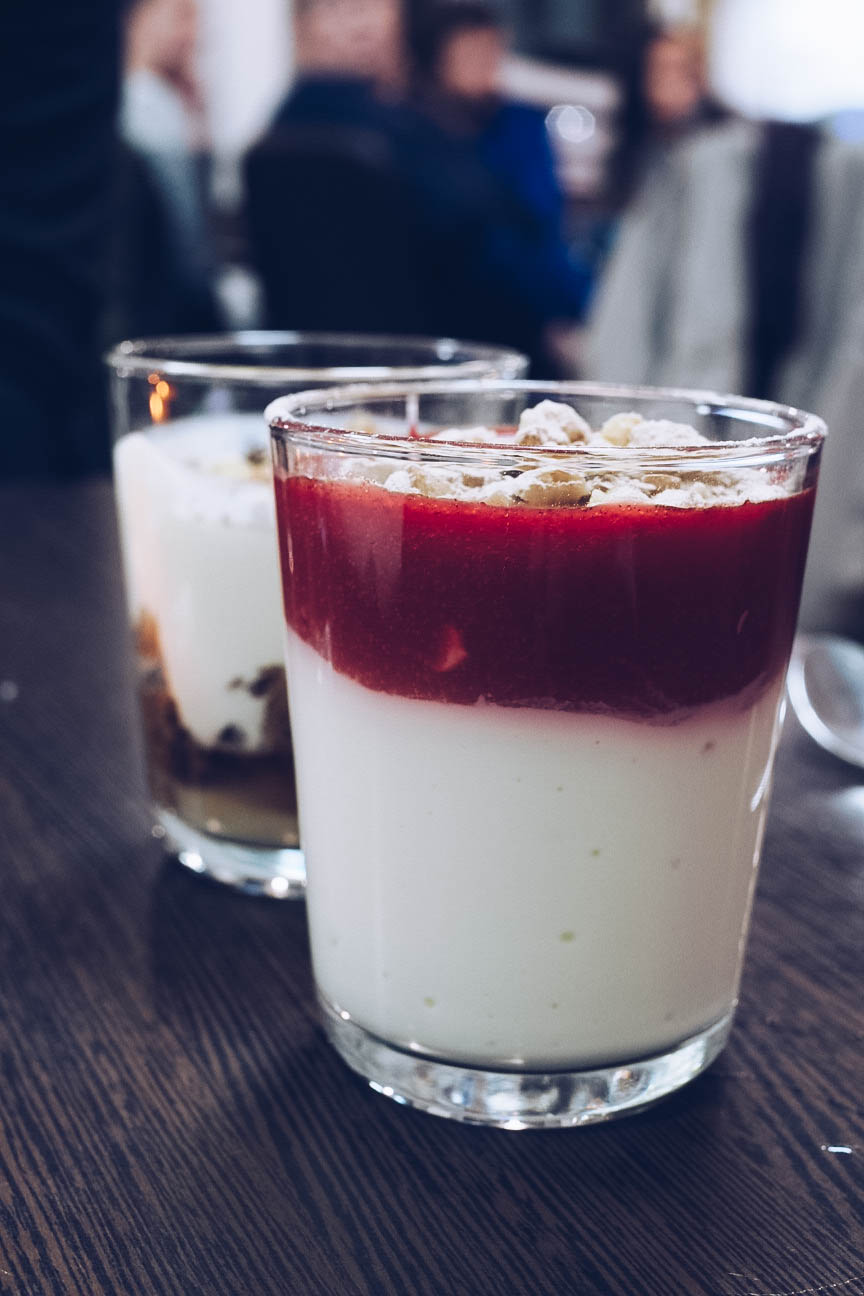 You must have seen the huge push for this stuff in the UK recently, but it’s no advertising ploy; the Icelandics really do love their Skyr. From mixing it with mayo to make a savoury condiment, to serving it cold with berries and honey for dessert, it has the consistency of greek yoghurt but is smoother in taste and not packing as much of a sweet punch. I love it with the added nutty crunch as served at Icelandic Fish & Chips. 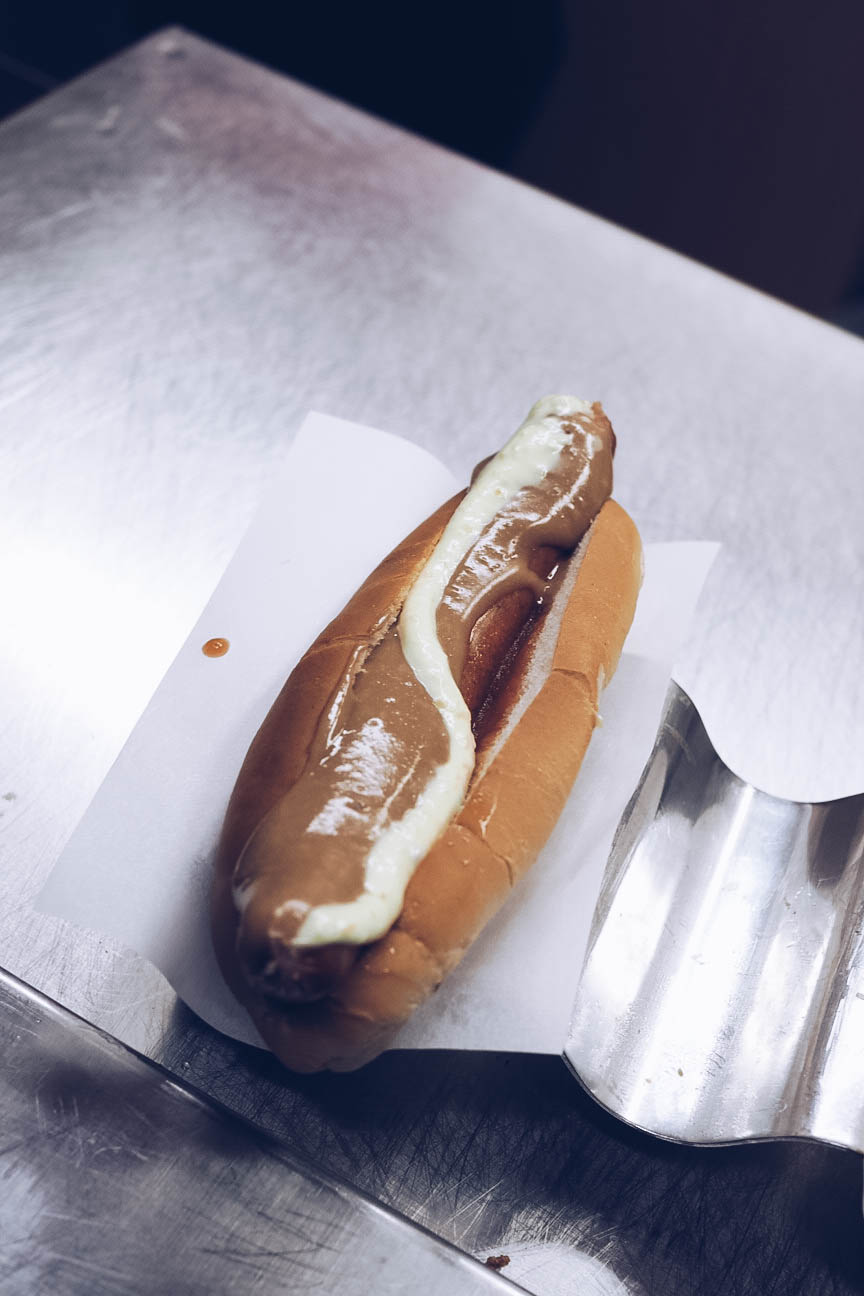 I love finding a food abroad that is familiar with an unfamiliar twist. Sure, the hotdogs in Iceland come with the expected sausage in a bun (although it’s mainly lamb meat instead of pork), but it’s the toppings that change it up. Bæjarins Beztu Pylsur is a chain of hotdog stands that have been in operation since 1937 and can command around-the-block queues for it’s cheaper-than-chips dogs. In fact, I like it so much and it was so reasonably priced, that I had two, both covered in ‘everything’, that is raw and cooked onions, a sweet brown mustard called pylsusinnep, ketchup and remoulade, which is a sauce made with capers, mayonnaise and mustard. Don’t wimp out when ordering, go all in for the full Icelandic experience!

My expectation of Icelandic food was dried meats, smoked fish and endangered species, which actually aren’t as prevalent as you’d imagine. Instead it’s warming, hearty comfort food, which suits this Brit abroad down to the ground.