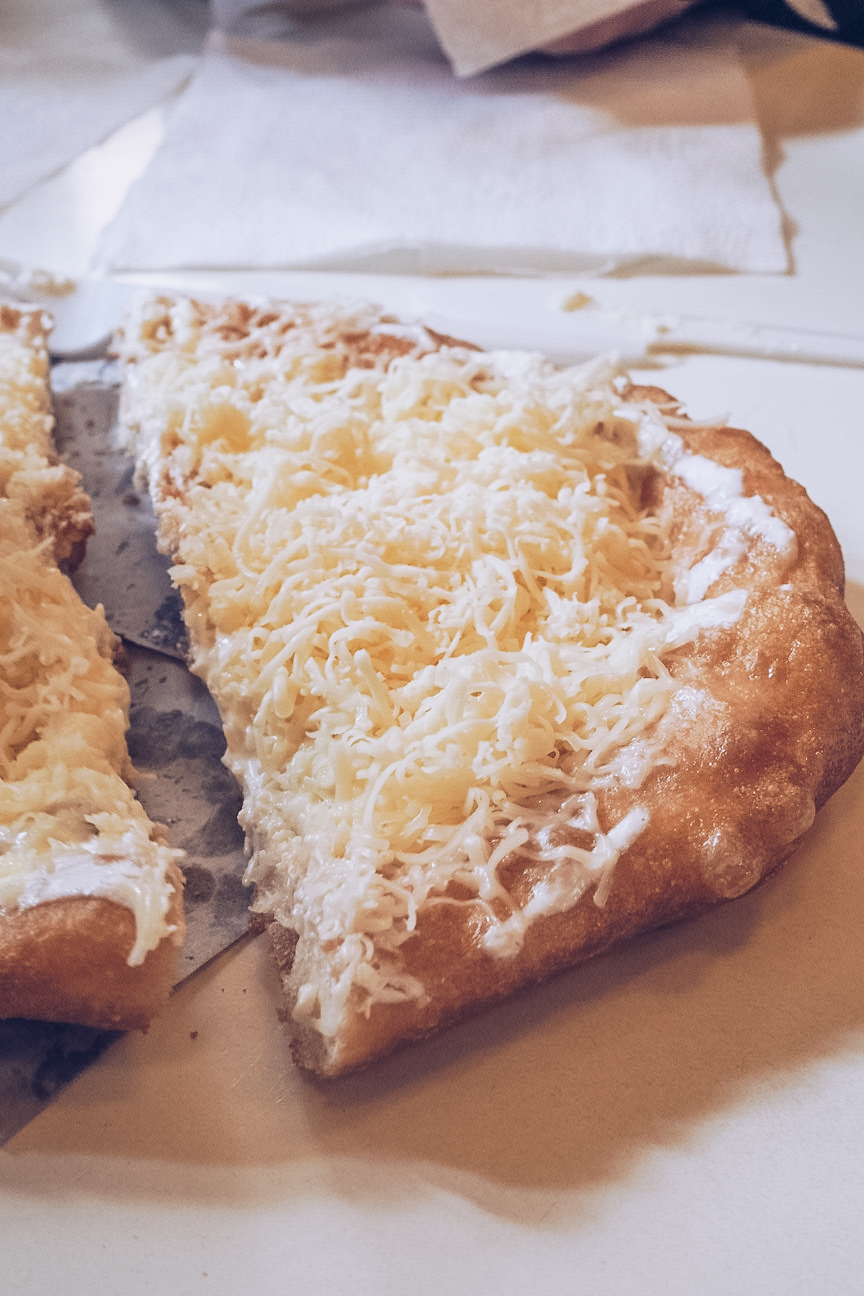 My previous experience of Eastern European food can be summarised as ‘lots of meat and cheap beer’, which definitely isn’t to say that I haven’t had some great meals, just that they’ve all had those two components in common. I’d heard that Hungarians take their food very seriously though and I didn’t want to miss a thing, so I joined a culinary walking tour with Taste Hungary* on my recent trip to Budapest to find the best of the best. [Warning: this post is not vegetarian friendly!] 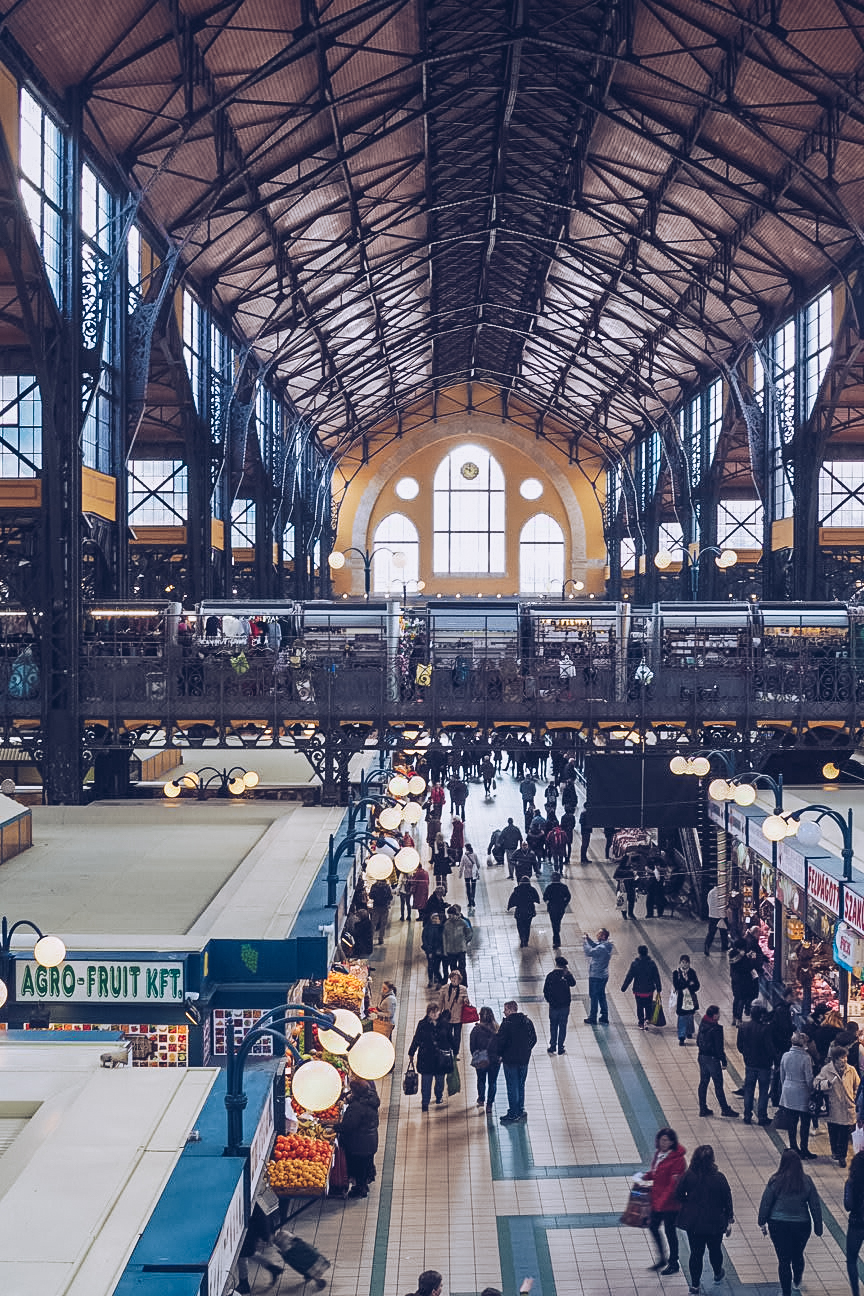 Speaking of the best, that’s exactly where I’m going to start because I have a new found love affair with lángos. This deep-fried flatbread is typically eaten at breakfast, so I tucked in just after 10am in the Central Market Hall. You won’t find this dish in restaurants as really it is a street food, eaten easily whilst standing up and without cutlery. Really, cutlery would’ve just got in my way and slowed me down as I devoured my half of a dinner-plate sized serving, freshly cooked and smothered in sour cream, cheese and a whole heap of garlic. It was the best thing I ate in Budapest, without question. 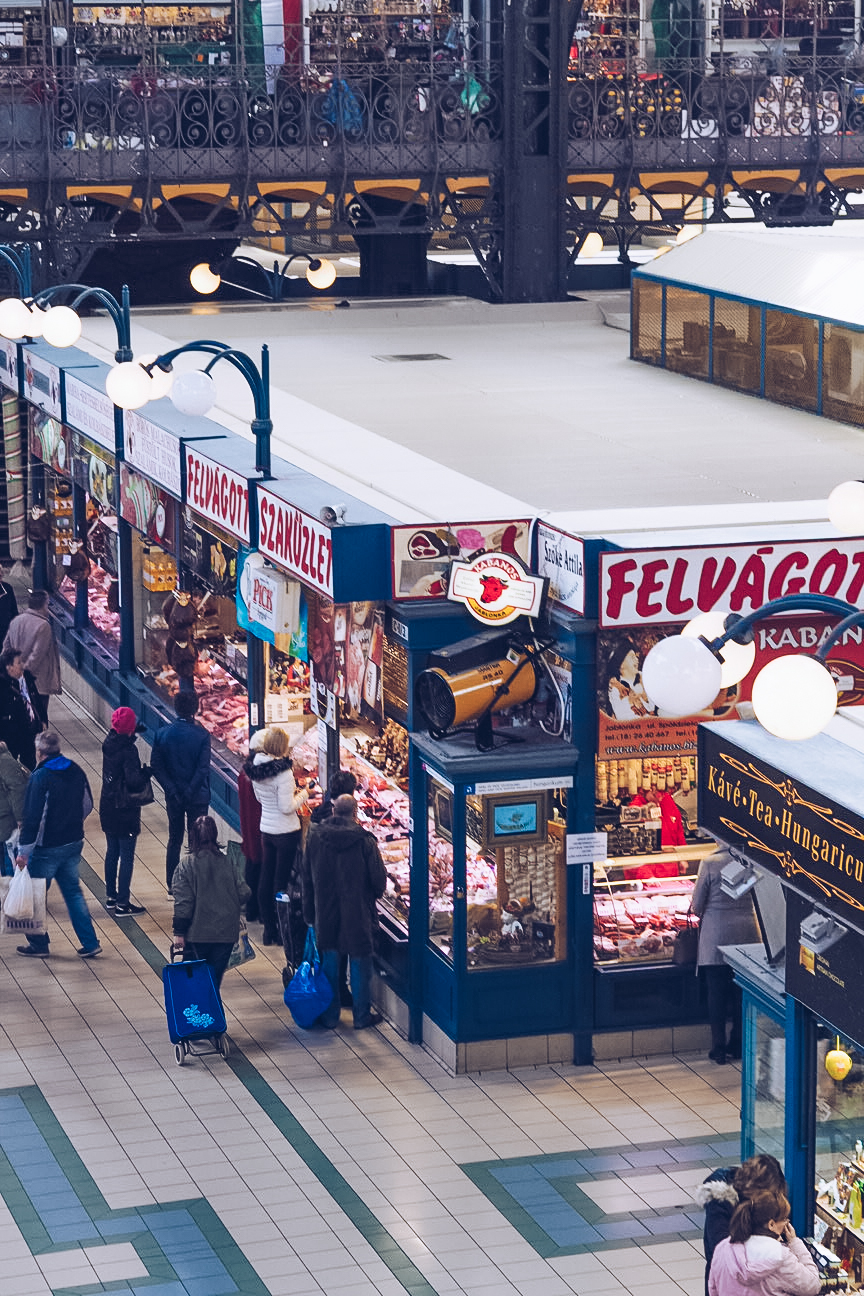 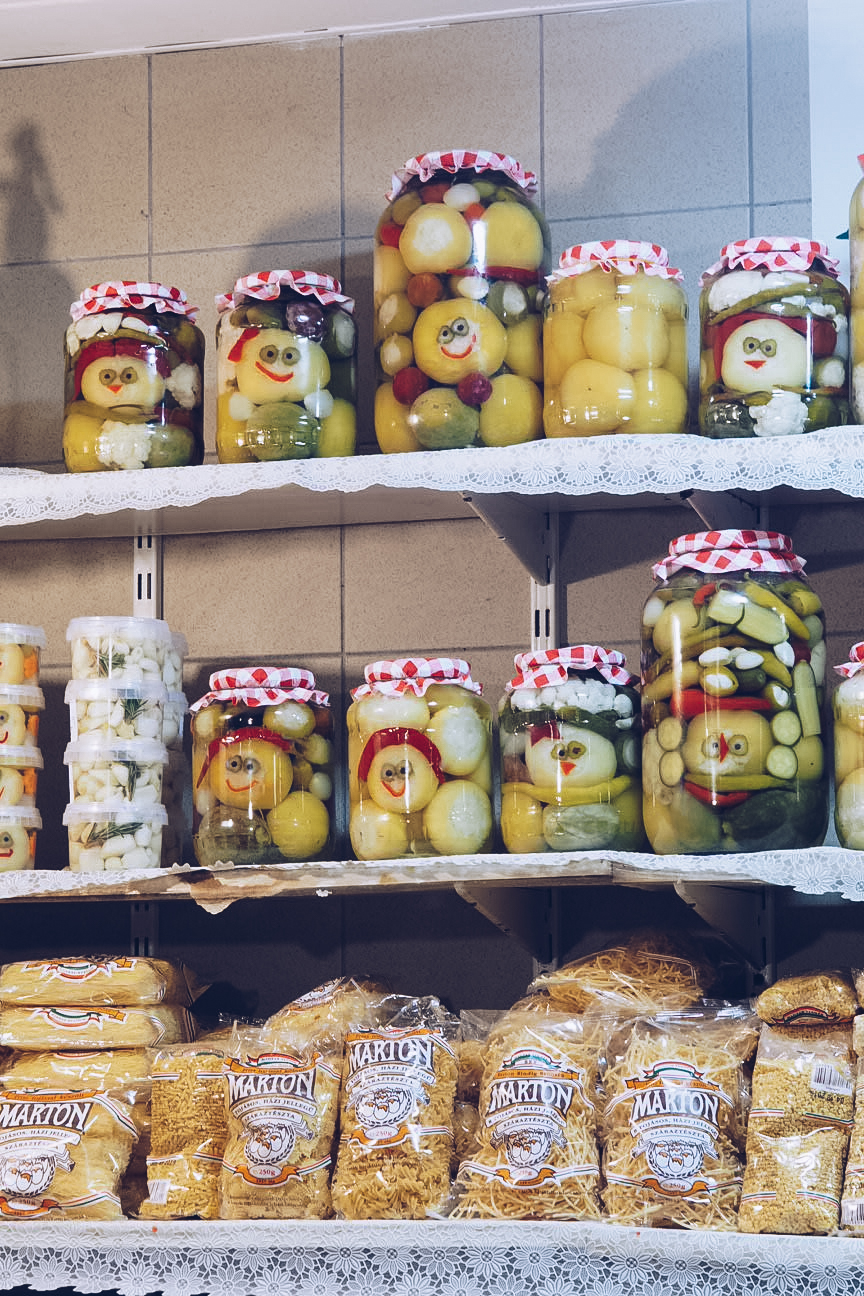 Moving swiftly on to the food I enjoyed least, but it’s so quintessentially Hungarian that you have to at least give it a go. The lower level of Central Market Hall is full of stalls selling pickled goods, from recognisable gherkins to the bizarre baby watermelons, there isn’t anything that’s safe from being preserved and packed into jars. We crunched through super tart apple pepper and through to spicy stuffed mini peppers, none of which I have a huge desire to eat again BUT all of them tasted unique when I was just expecting everything to taste like vinegar. 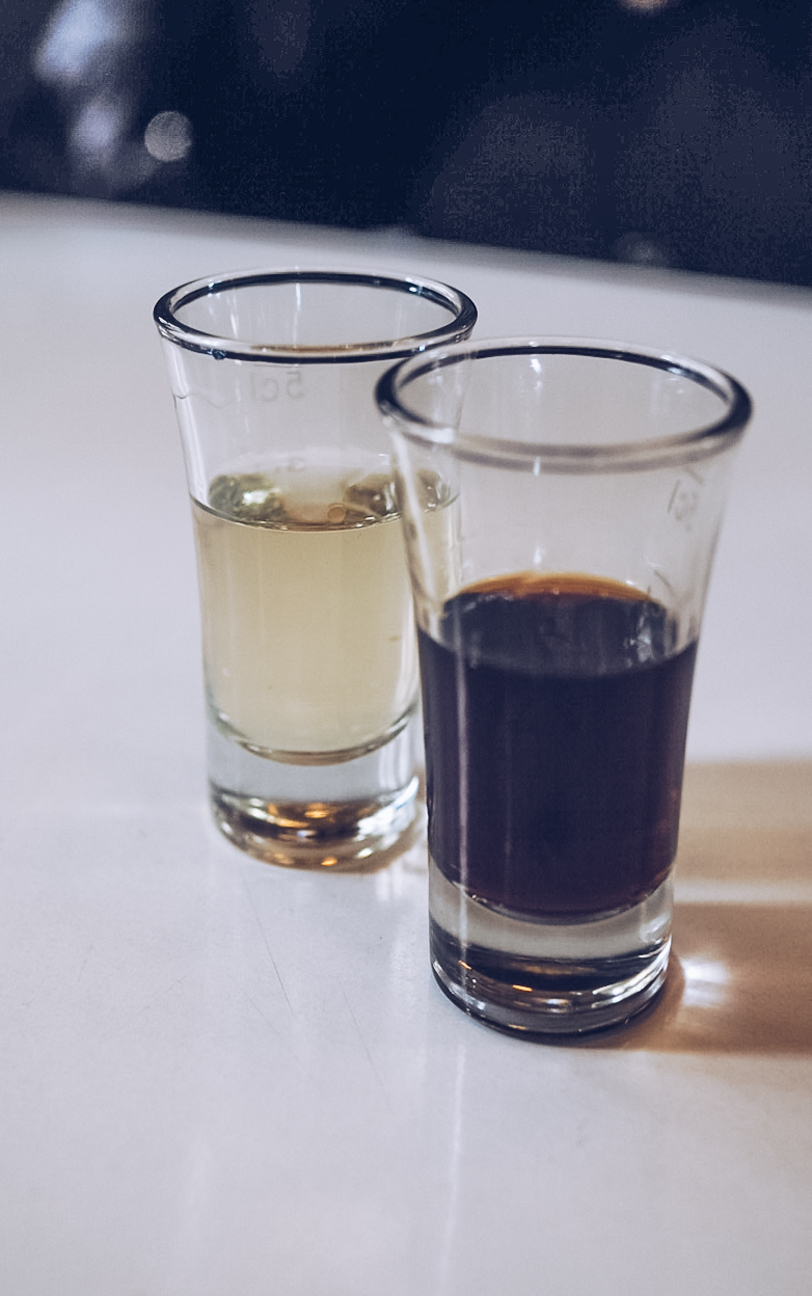 The brilliantly named Unicum puts Colonel Sanders to shame with its secret blend of 40 herbs and spices. The drink is taken very seriously throughout Hungary, with many people sipping it after breakfast to help their digestion. Even the Russians knew how important it was to the people, and when Communism took over, they attempted to control the production but couldn’t quite get the flavours right. A liberated Hungary means we tasted the full hit and it’s certainly unique, which is the adjective it gets it’s name from too! My preference though was for the national drink, Pálinka, a fruit brandy that’s so loved by the country that it’s referenced in the national anthem! 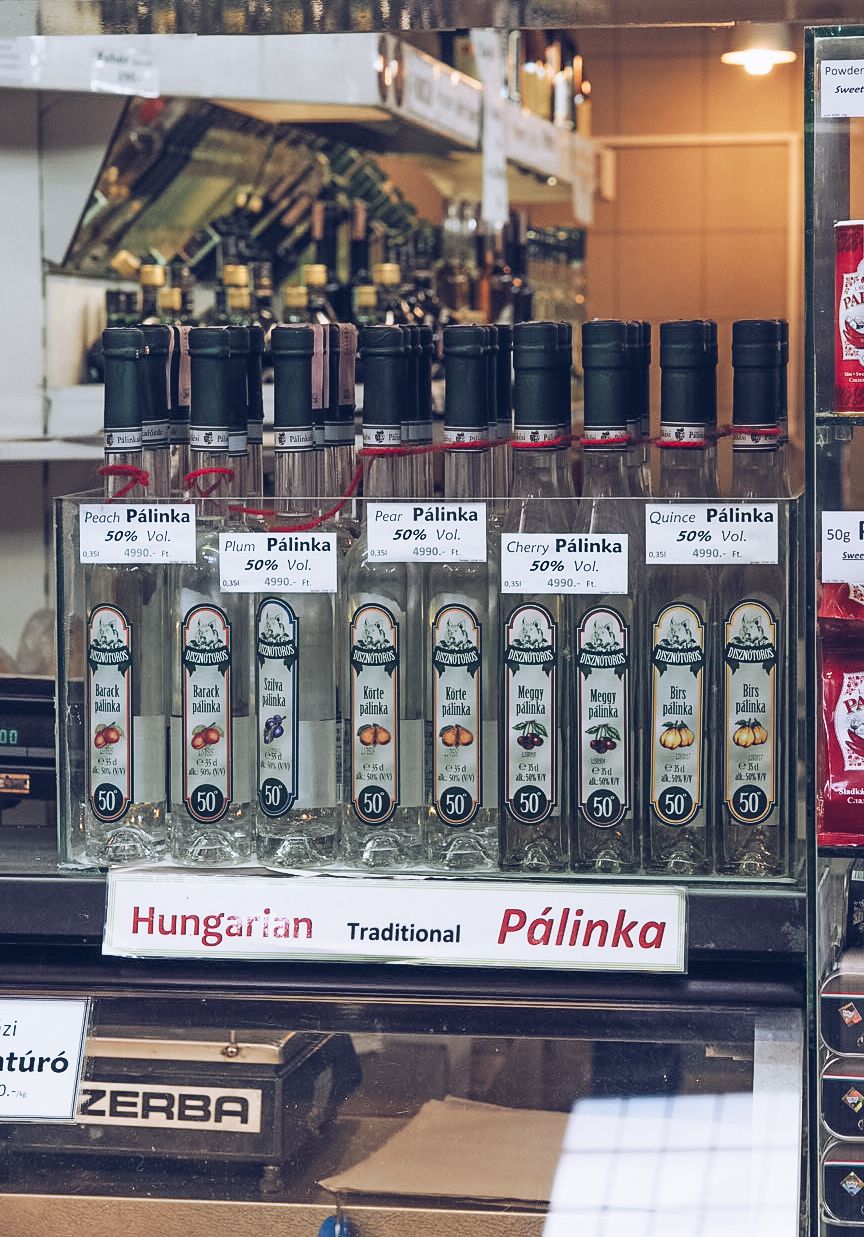 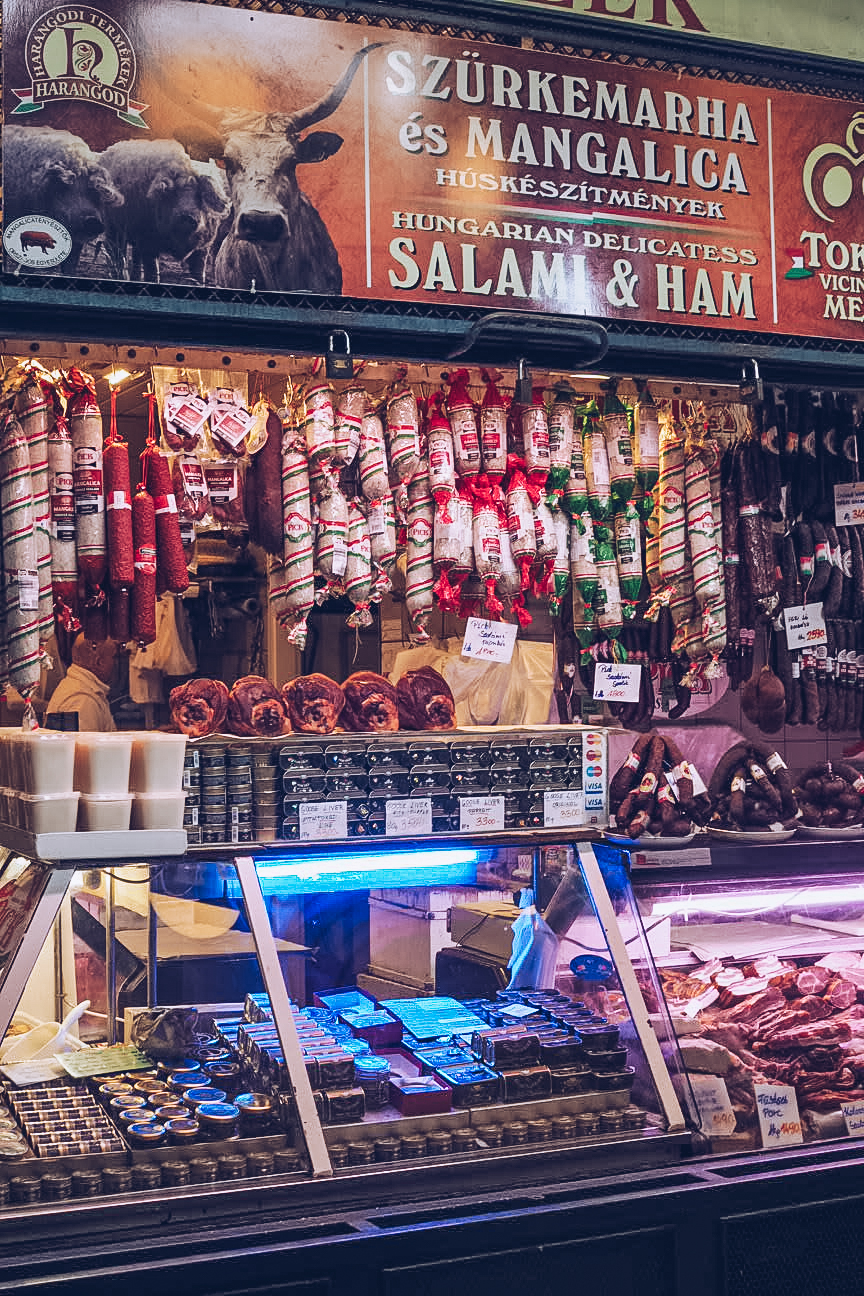 Hungarians don’t believe in wasting any part of an animal that’s been reared for meat, which means offal is very common place in every restaurant and market. I tried a selection of thinly slices cured and dried meats as part of what was essentially a locally made charcuterie board, and each variety was totally delicious in its own way. Many had a characteristic paprika kick (it’s Hungary’s most famous flavour, after all), and there were a few things served up that I wouldn’t have necessarily have picked myself, such as horse meat. Horses are farmed for meat throughout the country alongside other unfamiliar breeds of more familiar animals like Mangalitza pig and grey cattle. The latter actually made up the beef tongue I also tried which I thought would be pretty tough but it actually just tasted like corned beef! 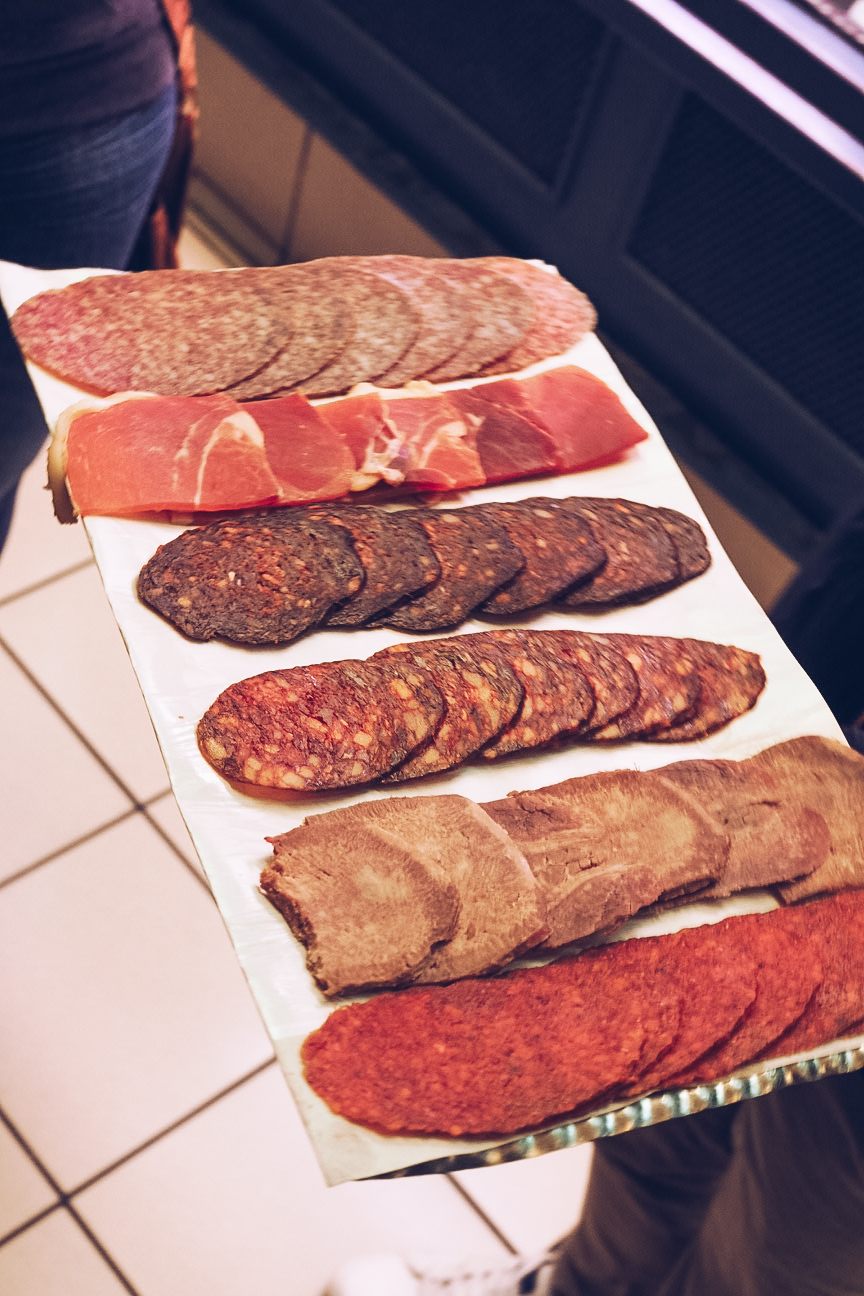 Surely the dish most associated with Hungary, I’ve had (and made) many versions of this before, but it turns out they were all bastardised to a point where I hardly recognised the real thing. Goulash as I know it is a thick stew-like meal, but actually it is a soup, seasoned heavily (of course) with paprika. We went to local’s favourite, Belvárosi Disznótoros, which translates as the Downtown Pig Slaughter(!) and slurped spoonfuls of spicy broth with big chunks soft beef and plenty of carrots and potatoes throughout. It’s perfect for a chilly day, but our guide told us that goulash is eaten whatever the weather, come rain or shine. 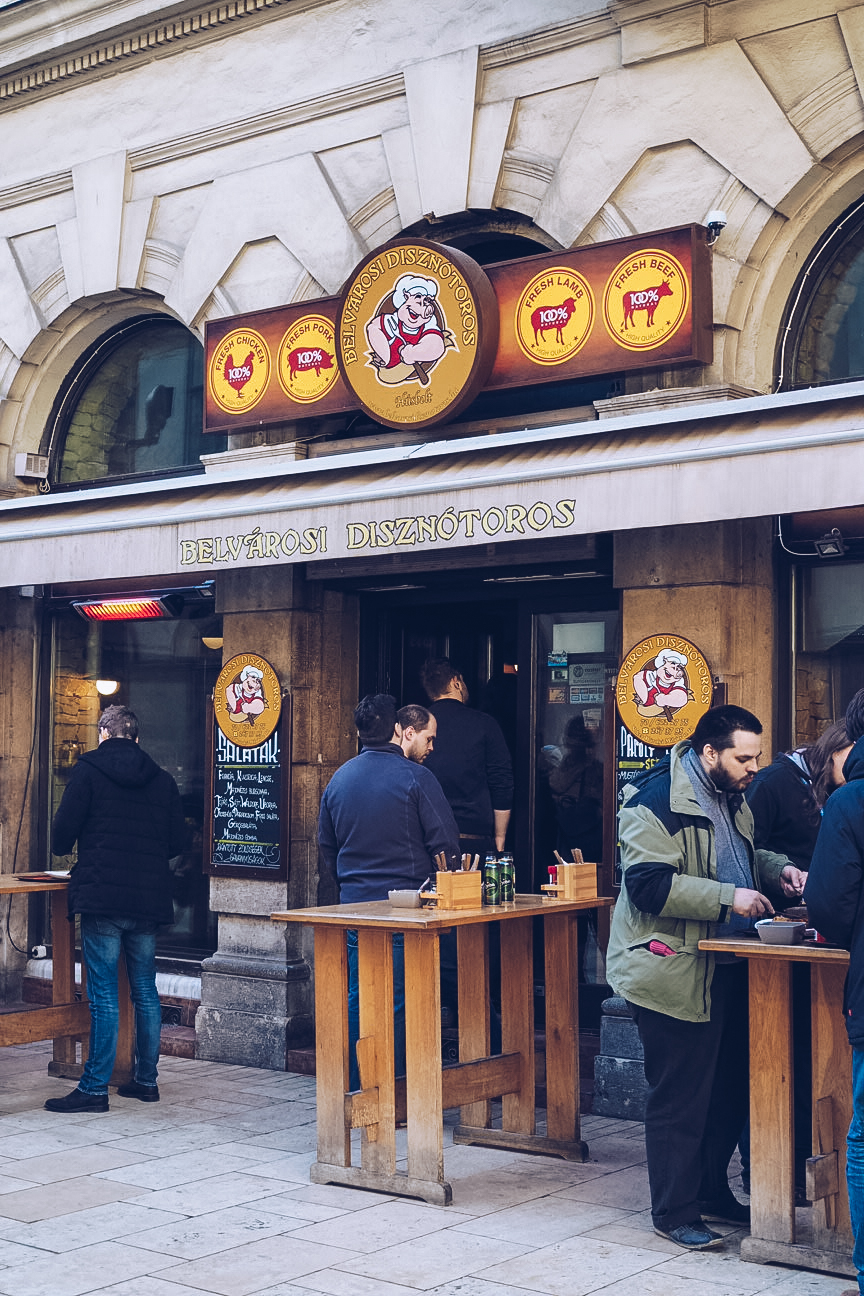 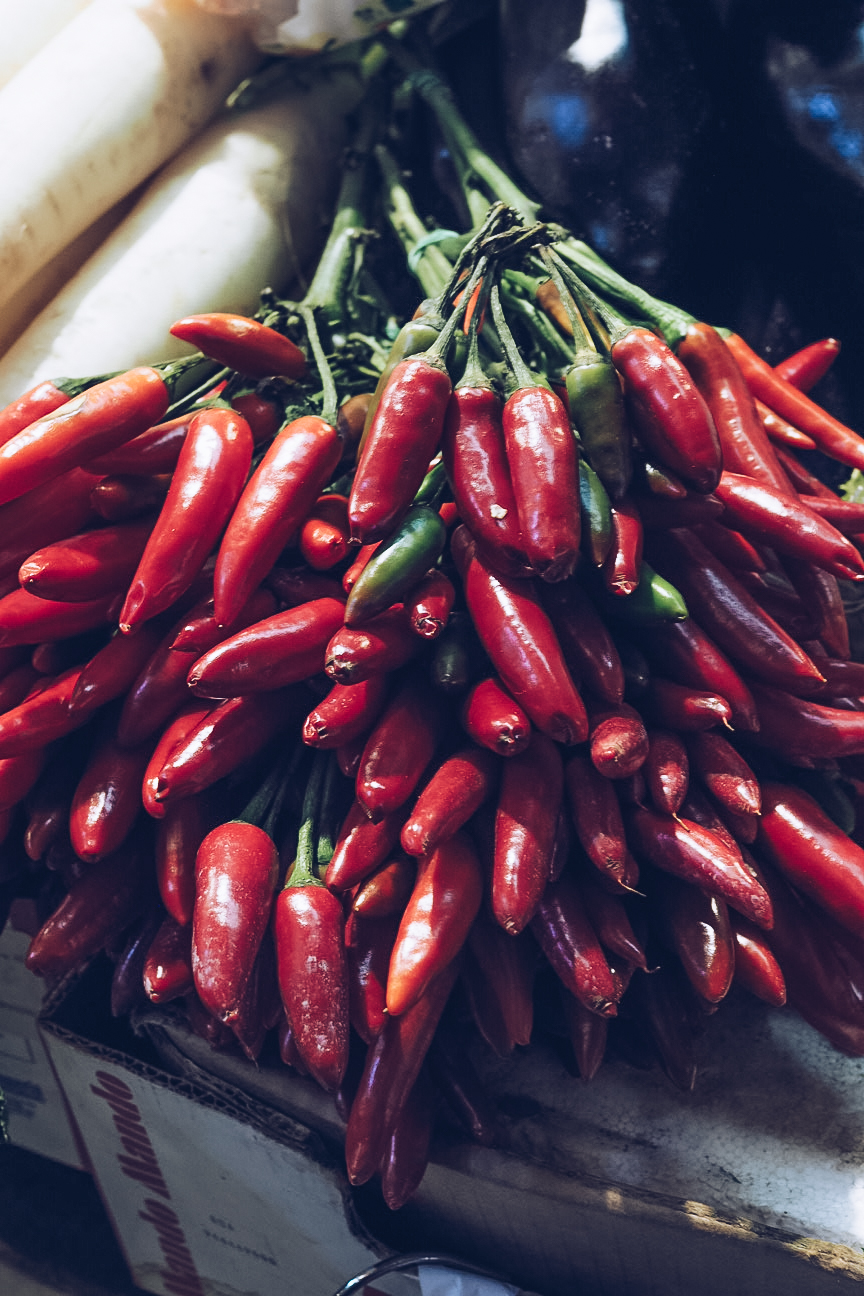 I’ve already referenced this a number of times because paprika really is used in pretty much every dish you’ll find in Hungary. You’ll find the original bell peppers and chilli peppers for sale in every market, but the spice itself is obvious in the bright red of many dishes. At Belvárosi Disznótoros, we had a paprika sausage which put any chip-shop chipolata to shame (alongside a great blood sausage and a liver sausage too!), but in addition, we had an enormous bowl of a incredible, lip-melting, hothothot paprika sauce as a condiment to mix into goulash or as a dip (I highly recommend it with deep fried chicken livers; who’d have thought it?!). 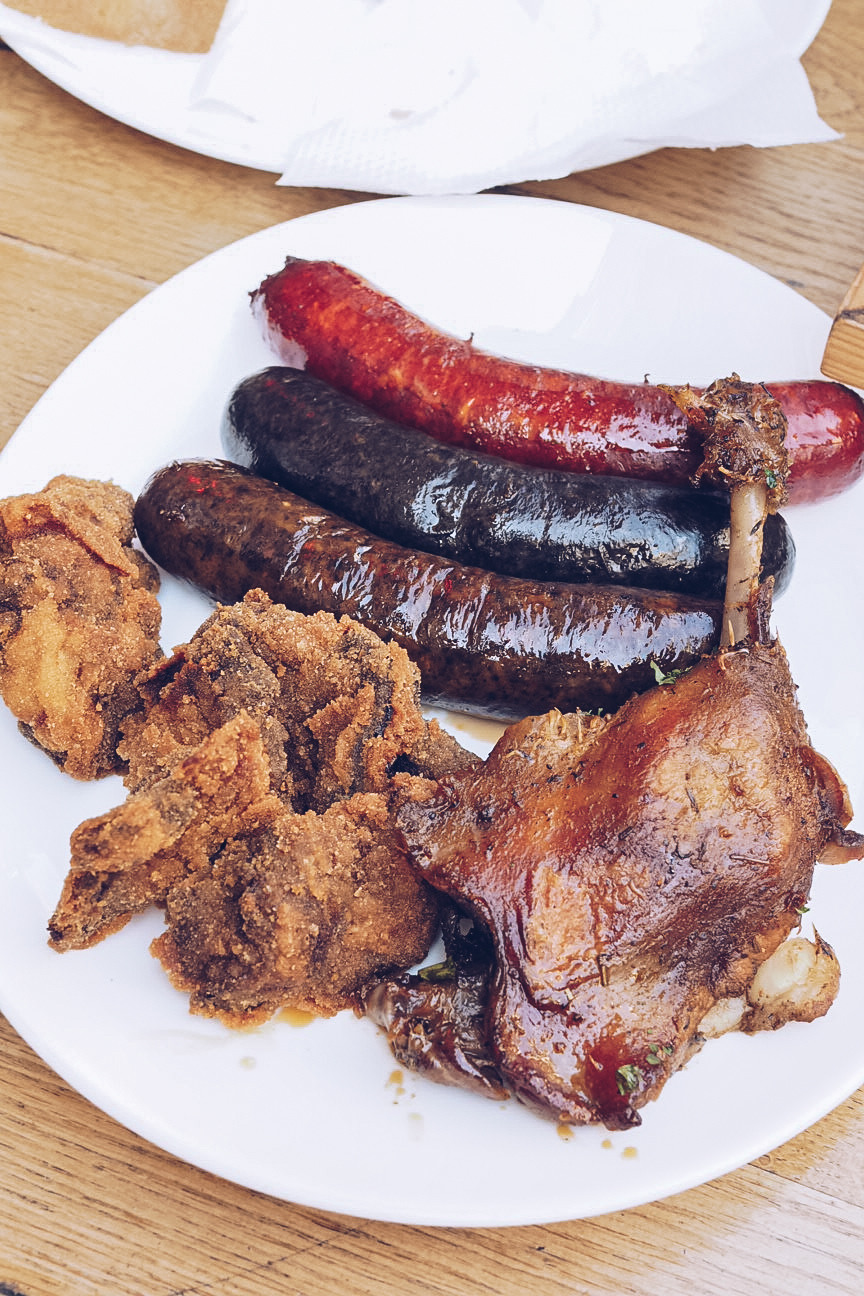 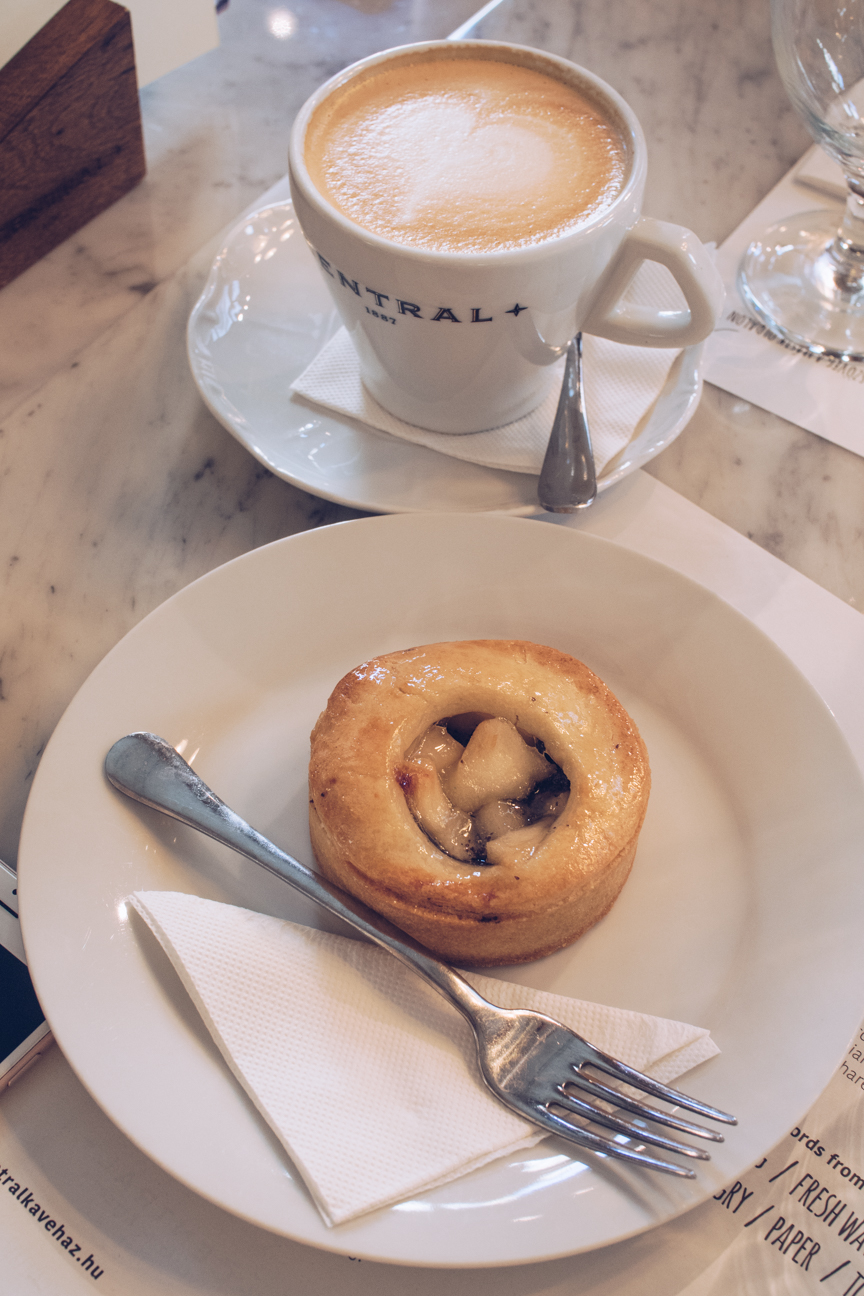 Budapest is all over cafe culture, with big and beautiful establishments making a big deal of a sweet treat. It’s not so much a particular food you need to try, it’s more about experiencing the lavish setting with a gorgeous cake to indulge in. Central Cafe has beautiful Art Nouveau decor and has seen countless Hungarian poets use it as inspiration to create written masterpieces. The plum jam and poppy seed filling in a light pastry case and topped with nuts and apple was just the added sweetness I needed after a morning of savoury overload. 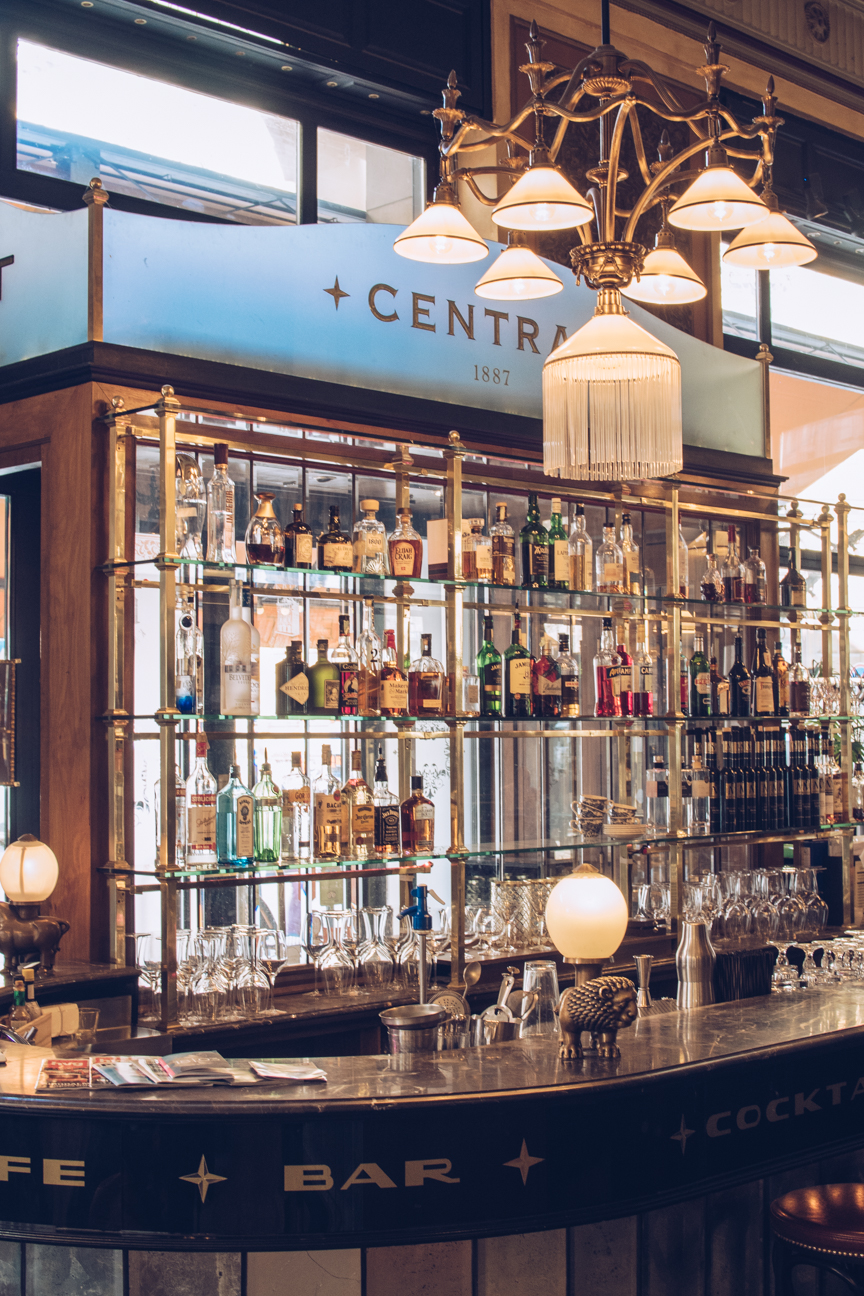 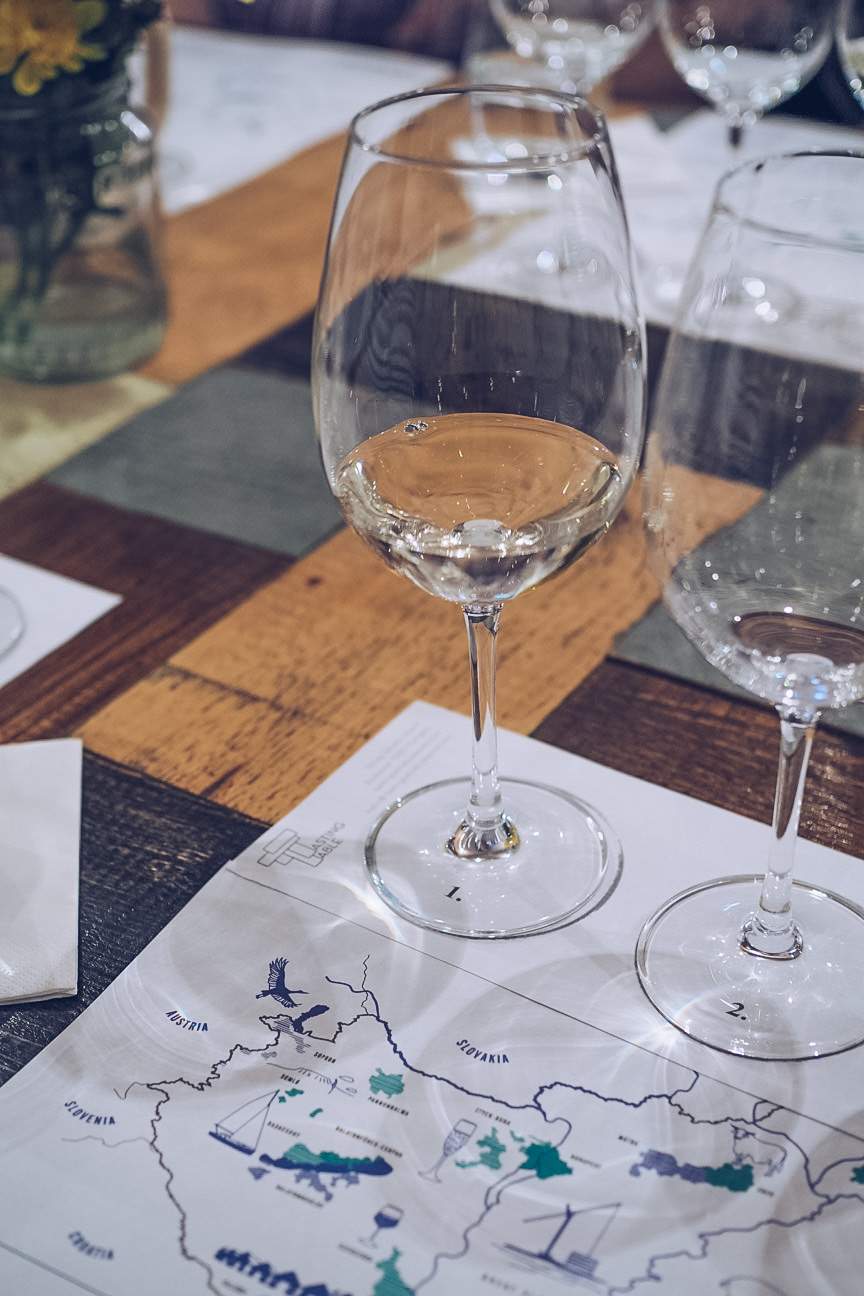 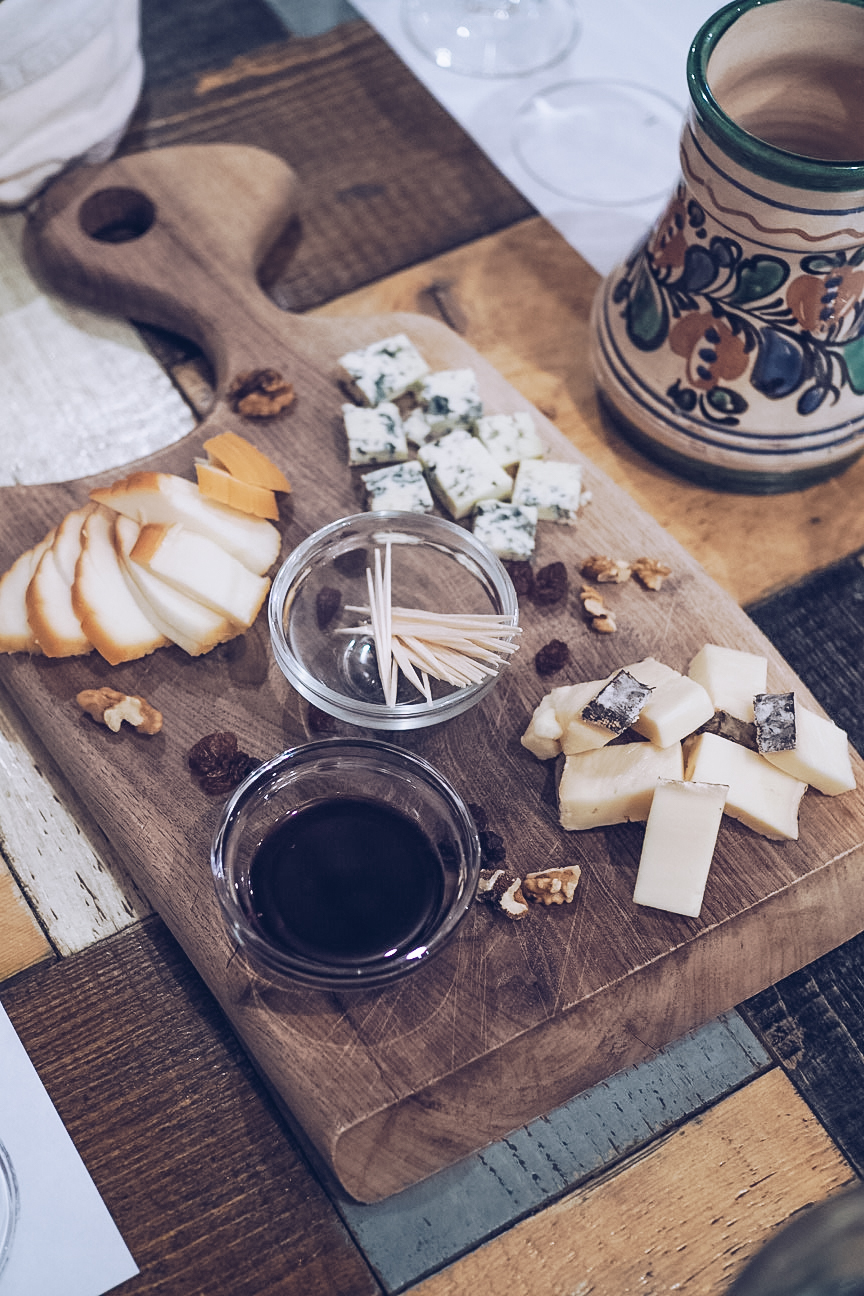 I’ve  travelled all around the world to try local wines, from New Zealand to South Africa, but Hungary has never even reached my radar before. But the country has a rich and varied history of winemaking, and sitting down at the Tasting Table in Budapest, I tried a couple of glasses, including a really interesting honey-flavoured muscat. But my favourite was the white wine from the Tokaj region which was fruity without being tart, and went so well with the local cheeses served up alongside it. A very pleasant way to end an incredible four-hour immersion into Hungarian cuisine. 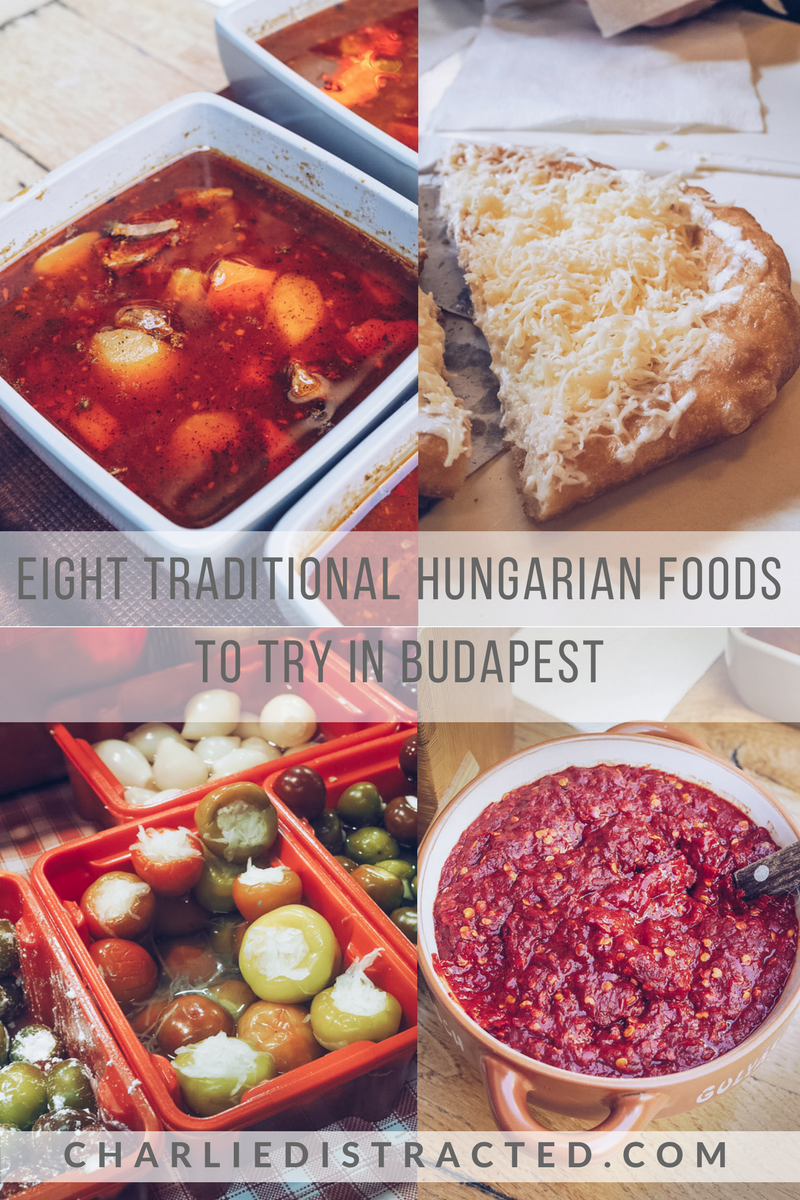